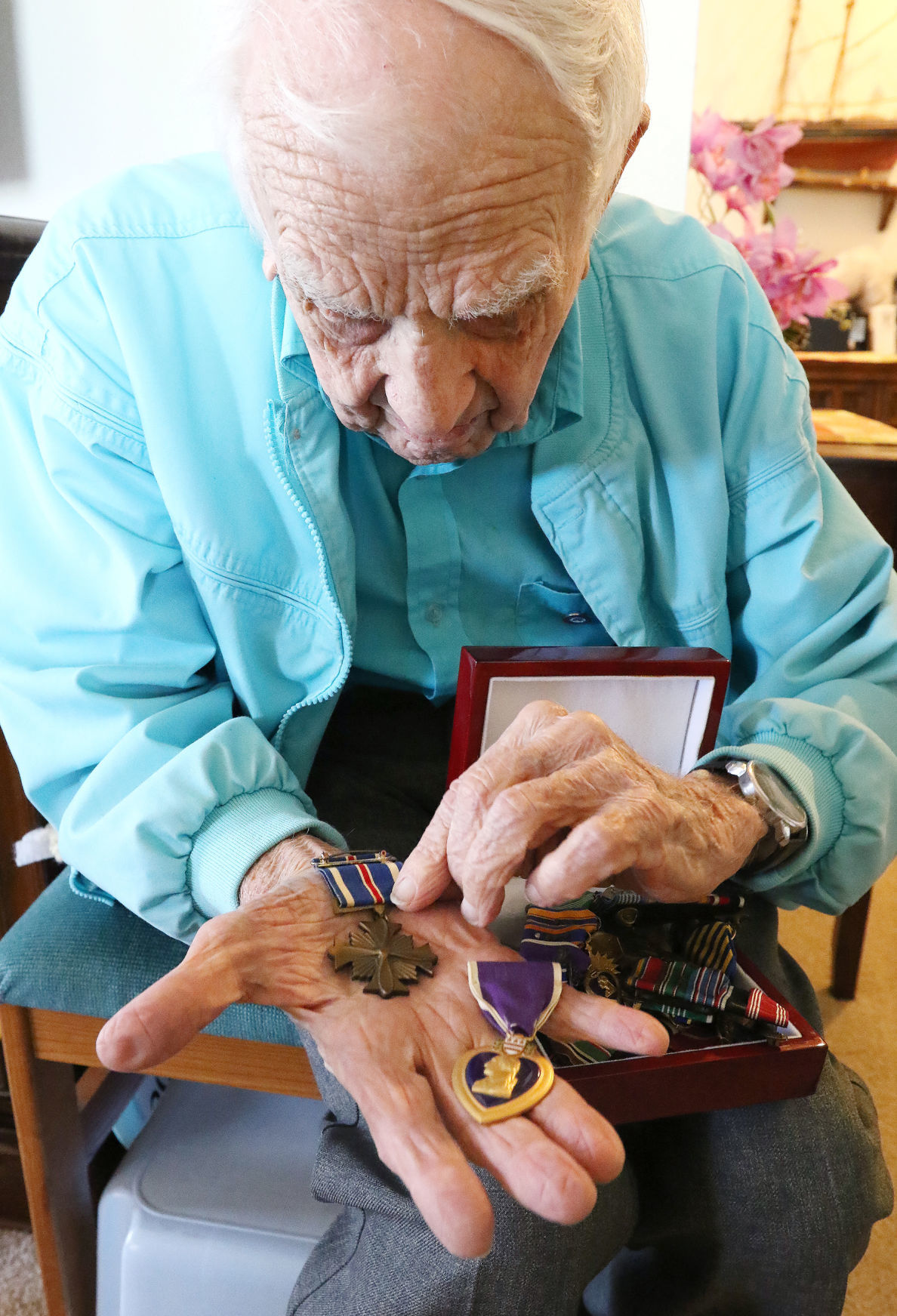 World War II and Korean War veteran George Stowell Burson holds the Purple Heart and Distinguished Flying Cross he received during his service as a pilot in the Air Force at his Roseburg home on Wednesday. Burson keeps the medals in a box with several other service medals and citations. 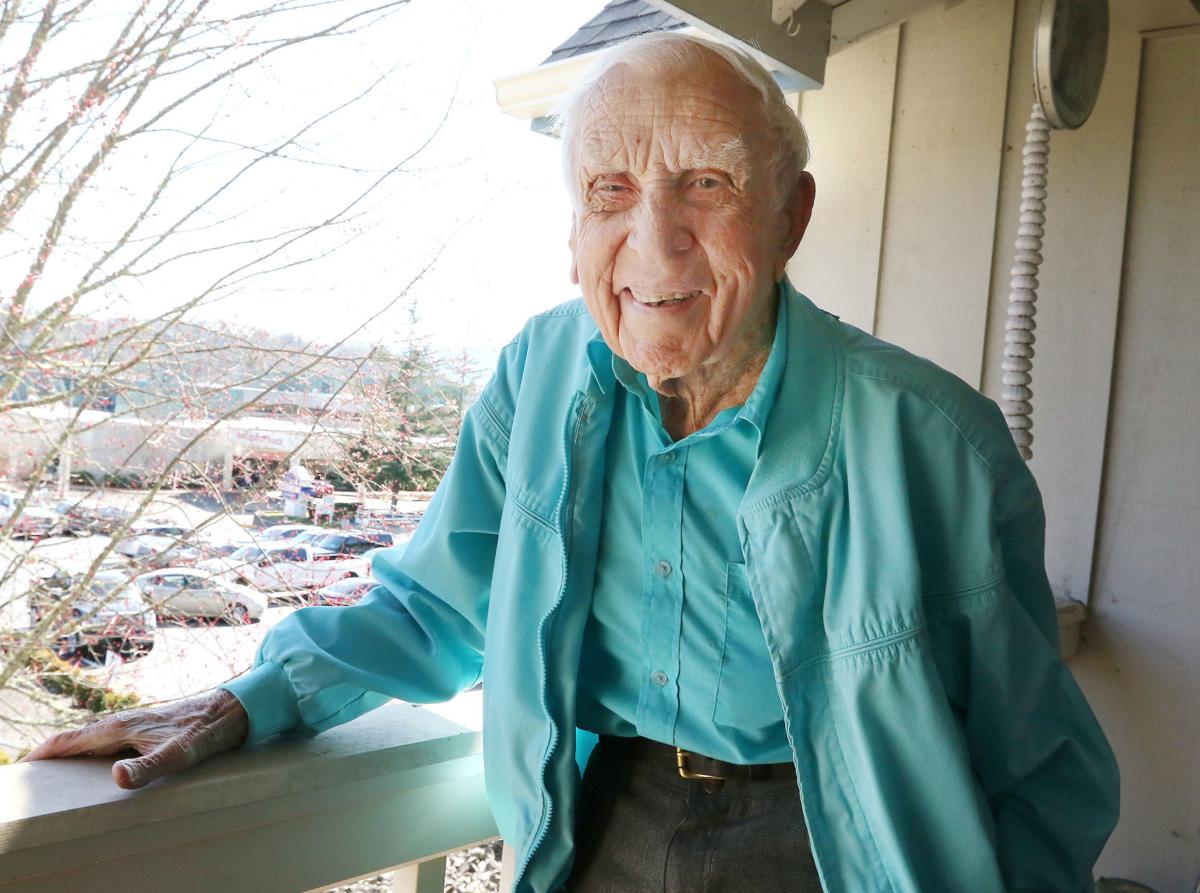 World War II and Korean War veteran George Stowell Burson at his Roseburg home. He will turn 99 in May.

World War II and Korean War veteran George Stowell Burson holds the Purple Heart and Distinguished Flying Cross he received during his service as a pilot in the Air Force at his Roseburg home on Wednesday. Burson keeps the medals in a box with several other service medals and citations.

World War II and Korean War veteran George Stowell Burson at his Roseburg home. He will turn 99 in May.

Nobody could blame George Stowell Burson for saying his memory is not so good anymore — he will turn 99 years old in May.

But when it comes to events like having his planes shot down four times in two wars, flying 53 combat missions and spending time in a German prisoner-of-war camp in World War II, he has a vivid recollection.

Burson served 25 years in the U.S. Air Force, known as the U.S. Army Air Corps when he went into the military during World War II.

Burson was classified permanently deferred and working for the U.S. Forest Service after graduating from the Oregon State College School of Forestry. He had to go to the college to meet his draft board and they happened to be giving Air Force entrance exams.

The draft board released him to join the Air Force on Feb. 8, 1942, just as the war was really heating up.

Burson not only survived being shot down once in World War II but three times in Korea.

Burson was in England during World War II when he had to bail out of a B-17.

“The navigator was passed out and I put both feet in his back and finally I pushed him (loose) and I pulled the navigator out and as the navigator and I were coming down, the airplane blew up right after that,” Burson said. “It killed the bombardier and the pilot and the turret operator, but the guys in the back all got out OK.”

He was taken to a German prisoner-of-war camp for nine months in Barth, Germany, along the Baltic Sea.

“We were behind barbed wire with guards all around you, we didn’t do anything, just walked around the compound or sat inside, didn’t have anything to eat, you just sat there, and looked at the world, that’s all,” Burson said.

Burson said the Germans really liked to tease the prisoners.

“The Germans would bring up these women and they’d take off their clothes and go swimming in the slough just on the other side of the wire, and they’d do that to antagonize the prisoners,” Burson said. “So the commandant of the POWs ordered all the men to stay in the barracks when the women came by because he didn’t want us to get shot.”

When Burson got out of the prison camp, he came home and worked for his dad, but then went back on active duty in Roswell, New Mexico, which became popular for an alleged UFO sighting.

“We operated out of the hanger they (UFOs) were supposed to be in, and we never did see any,” Burson said. “So somebody was making big hay out of nothing.”

He was sent to Otis Air Force Base on Cape Cod in Massachusetts for a short time and then sent to Korea where the Korean War had just started. He was asked to be a volunteer observer pilot to find the targets and bring in the fighter pilots so they could hit the targets.

Burson was told that he would fly an unarmed aircraft for 50 missions and then go back to Japan and then he could bring his wife over so they could live together. So he did his 50 missions, but not without more near-death experiences.

“One time we crash-landed on the side of a hill and the airplane turned over and I fell out and I unbuckled my observer and he fell on top of me, and we ran over the hill and down the trail and found some friendly South Korean troops,” he said. “I was shot down three times and I even got my name written up in a flying magazine and pictures getting shot up by Yaks, but we survived that one too.”

Burson flew a C-47 into a frozen lake that was nicknamed Frozen Chosin, to pick up Marines in an area between Korea and Russia in December 1950. The Marines had been ambushed and many lost their lives, but his job was to pick up the survivors and get them out.

“It was cold, it must have been 30 below zero, the lake was frozen enough to land an airplane on it,” he said.

Burson came back to Nellis Air Force Base outside of Las Vegas, and became assistant director of academics. He worked with the atomic bomb tests that were being conducted in the Nevada desert and his job was to decontaminate the planes when they came back from the tests.

“And I got to sit on two tests, one was 3,000 feet and the other 6,000 feet from ground zero when they were detonated, so that was kind of exciting,” Burson understated.

After his experience with atomic weapons, Burson went back to England and was base operations officer at Shepherd’s Grove Air Base until that base was closed down. Then he went to Uxbridge where Winston Churchill had his office during World War II.

“It was six floors underground right in the middle of town, under a park and you opened up the door of this little tiny building that looked like an outhouse, went in an elevator and went down six floors, and it was a complete operation down there,” Burson said.

“That was my job, which I never had to do of course, that was a pretty big responsibility,” Burson said.

When he came back to the U.S. he went to school to learn how to construct atomic weapons and taught people how to deliver them if the need arose.

When Burson finished his military career, he decided to teach school at the same time as his wife, Rebecca Burson.

So he taught middle school math for 12 years in San Antonio, Texas.

He was instrumental in getting a golf course built in the small town of Windcrest, Texas, where he lived outside of San Antonio, and he was a pretty good golfer.

“I did all right, I had nine holes-in-one,” Burson said.

Burson has a box full of pins and medals he’s collected — a Distinguished Flying Cross medal for heroism while in flight, a Purple Heart, and four air medals. He was a member of the Republican Presidential Task Force, the Republican National Committee, the U.S. Olympic Committee and many other organizations.

“But that was a long time ago, back in the ’50s, I was a member of everything and a master of none,” he said humbly.

After  Rebecca Burson, his wife of 45 years died in 2008, Burson moved into Linus Oakes and that’s where he met Phyllis Poe and they’ve lived together for about eight years.

Is there anything he would like to do differently in those 99 years if he could do it over?

“I don’t think so, although I didn’t like getting shot down.”

WW II veteran closing in on 99, has distinguished career

WW II veteran closing in on 99, has distinguished career