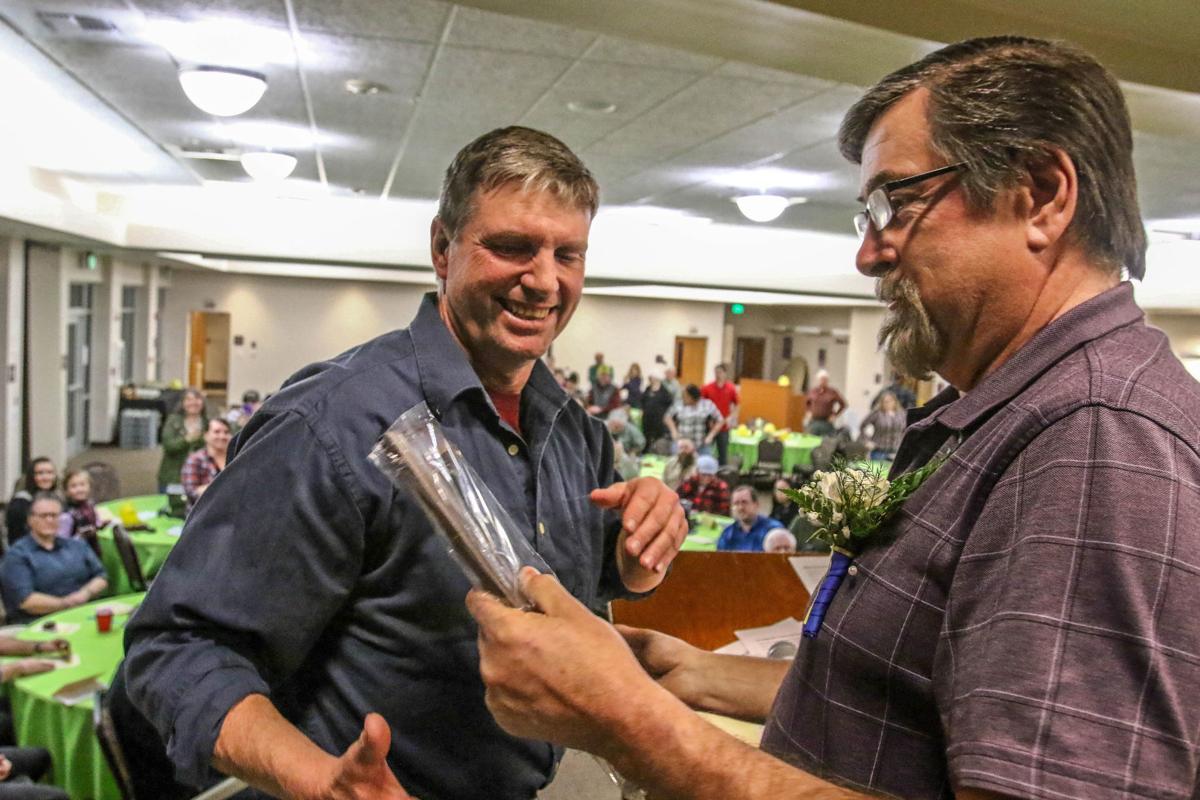 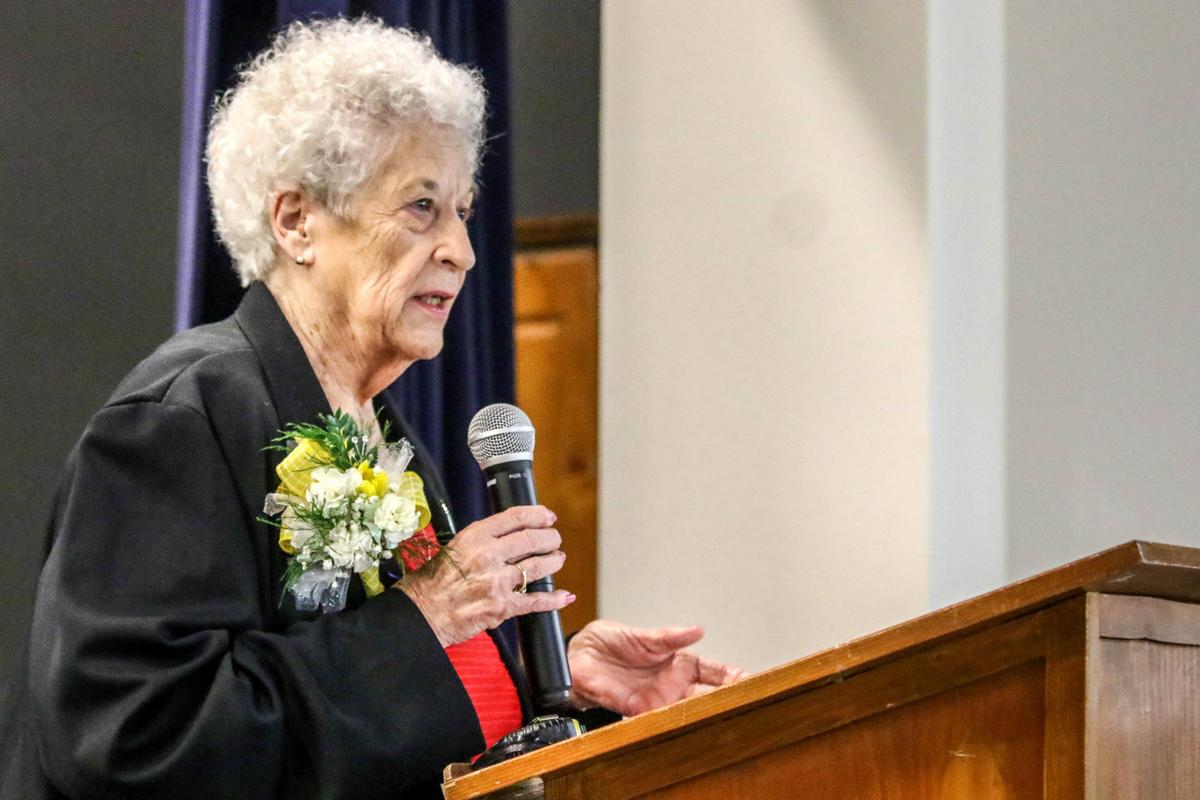 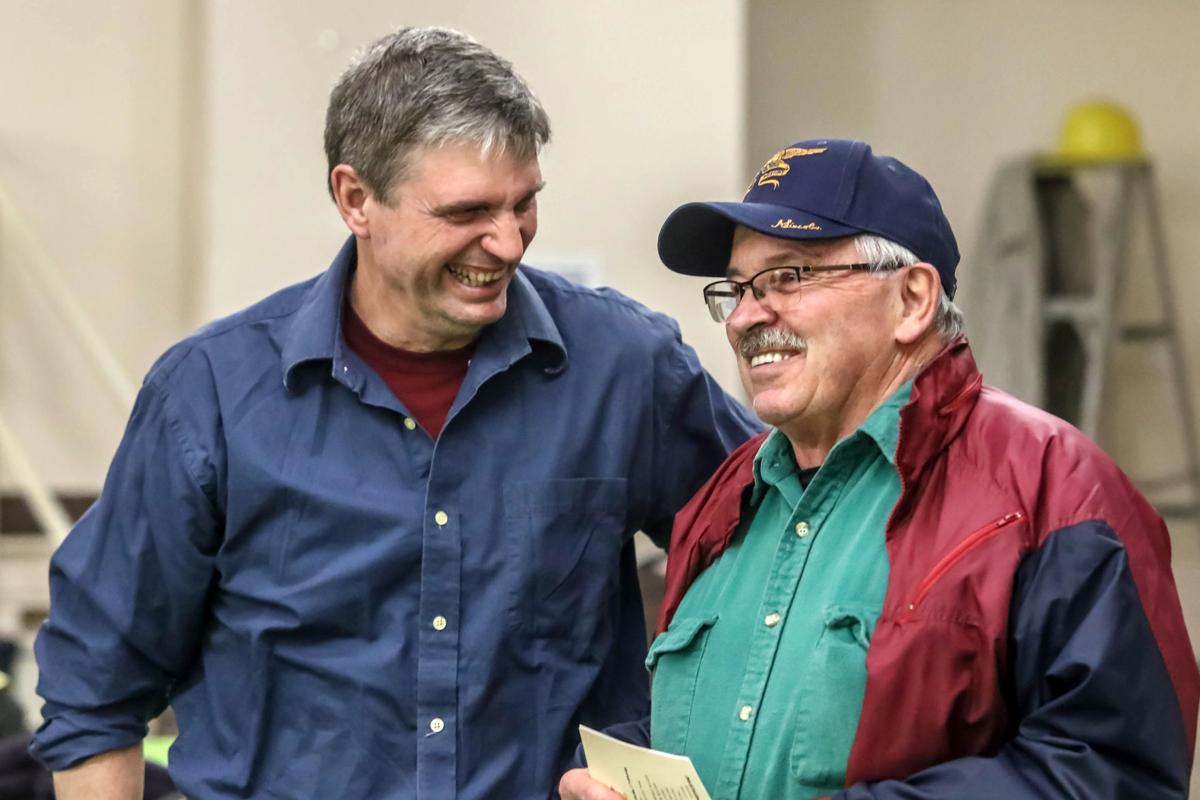 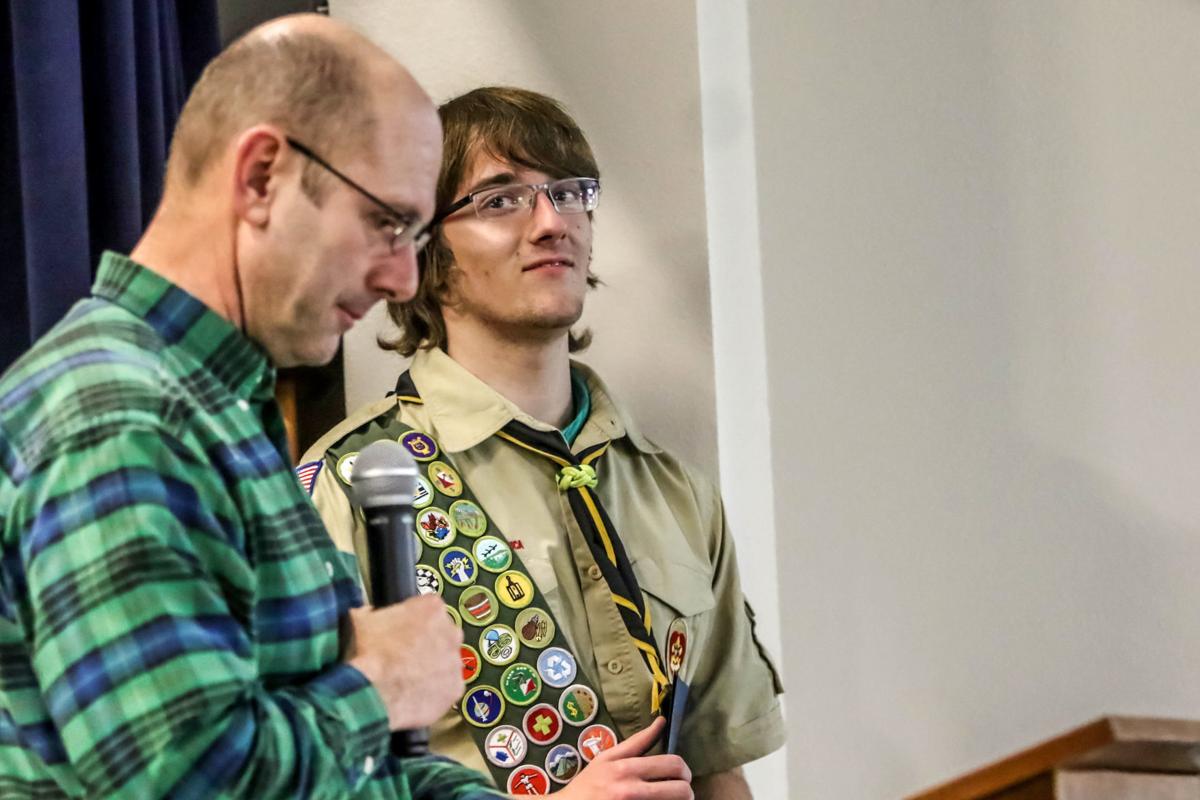 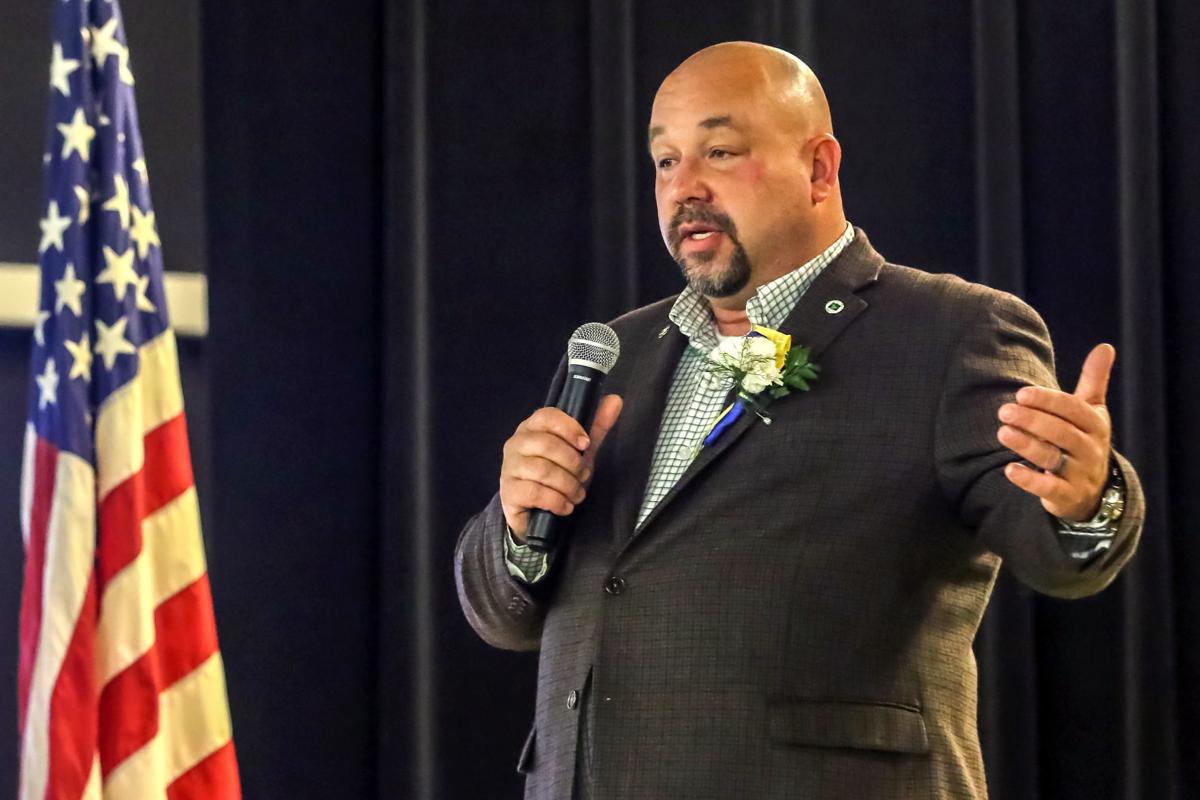 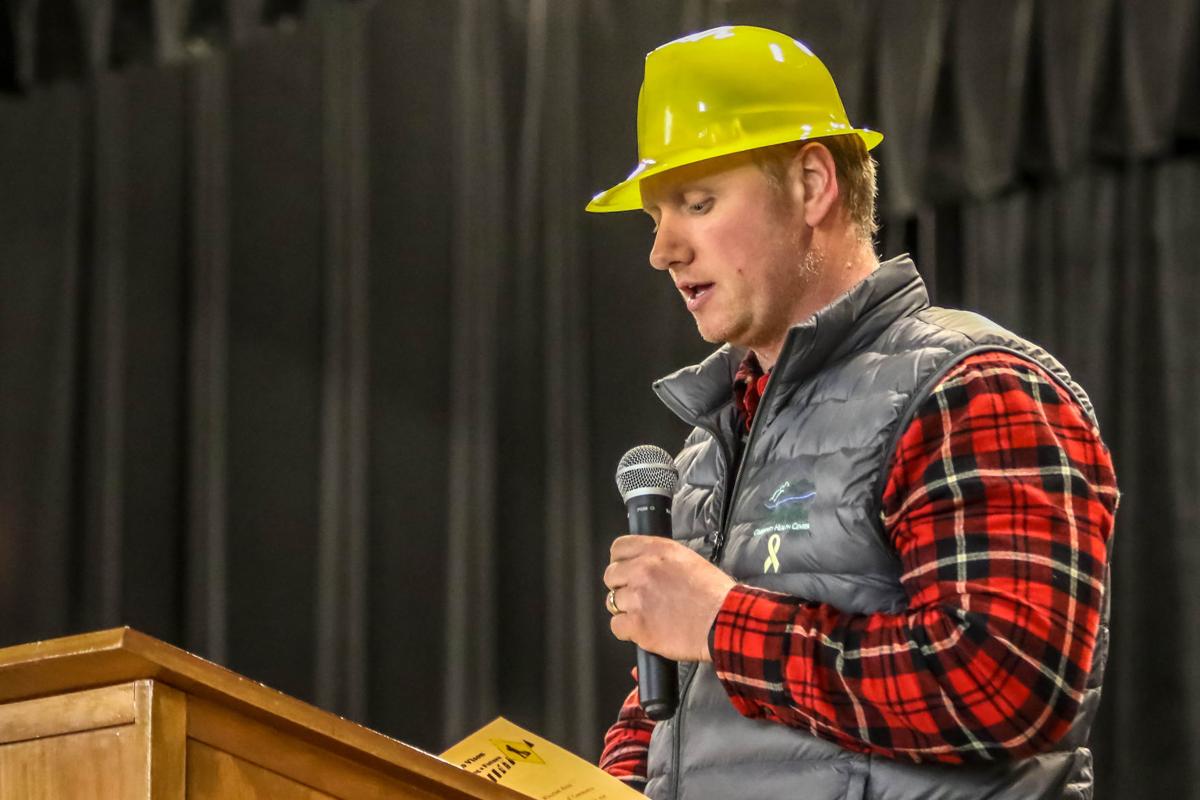 Wayne Ellsworth presents the Humanitarian Award to Clay and Donna Caldwell and Civic Award to Friends of the Winston Library during the Winston Area Chamber of Commerce First Citizens Banquet on Monday night.

Wayne Ellsworth presents the Humanitarian Award to Clay and Donna Caldwell and Civic Award to Friends of the Winston Library during the Winston Area Chamber of Commerce First Citizens Banquet on Monday night.

The two were selected at a banquet held at the Winston Community Center.

Zuver said Stookey is a longtime friend who has been active in the community since he was a kid.

Stookey has coached football, basketball, baseball, track and field and trap shooting for many local school and community programs.

He is a vice chairman of the Winston-Dillard School Board, serves on the Tenmile Methodist Church Cemetery Board, and volunteered for the Adopt a Highway program and the Retired and Senior Volunteer Program.

He’s been a 4-H volunteer, delivered senior meals, collected food for the local food pantry and collected food and donations at his restaurant Treats Highway 42 Cafe in Tenmile, sending truckloads of it to the victims of the 2014 fire in Weed, California.

Stookey said his wife, Kerri Stookey, probably deserved the award more than he did.

“I really want to say it is a family process. It’s just not one person,” he said.

Shirley Rummel, last year’s female First Citizen, announced Tisdale’s award. She said Tisdale wasn’t able to attend the award ceremony because she had to take her granddaughter to volleyball practice.

Rummel said Tisdale is a member of the Winston VFW Ladies Auxiliary, working to brighten the lives of veterans in nursing homes or the VA hospital. Tisdale also served on the Dillard-Winston Food Pantry board and started an ongoing program there collecting school supplies and Christmas presents for kids in need. She works diligently on many committees of the Winston Senior Center, where she served as treasurer for many years, Rummel said.

She plans trips for seniors and brought teens and seniors together to play Bingo twice a year.

“She’s a valuable member of our community and always sets a positive example for others to follow,” Rummel said.

A Humanitarian Award went to Clay and Donna Caldwell.

Wayne Ellsworth presented the award and said the Caldwells have volunteered with the Winston-Dillard Festival Association for many years and Clay Caldwell “cooks a lot of great corn dogs to help raise funds to put on our local festival.”

The couple also volunteered at the food pantry and worked on community beautification, among other things.

“They do not just talk about helping, but jump in and do the hard work,” Ellsworth said.

The Civic Award went to the Friends of the Winston Library, the group that rose to the challenge of managing the local library on donations and volunteer power after Douglas County stopped operating it two years ago.

Winston-Dillard School District Superintendent Kevin Miller said Kane is a senior class representative and National Honor Society president at Douglas High School, played football, is part of the math, drum and robotics clubs, and participated in the Science Olympiad. He also volunteers for the food pantry, Salvation Army and other organizations.

He plans to attend Oregon State University and pursue a career in neural robotics.

She volunteers at Saving Grace Pet Adoption Center and the Roseburg Veterans Affairs Medical Center and other organizations.

She plans to attend Umpqua Community College and the University of Oregon and pursue a career as a flight attendant and an international aid worker.

Host Mike Winters said Monday was about celebrating the good things of Winston and the people who make those good things happen.

Participants also heard a presentation from Douglas County Commissioner Chris Boice, who outlined recent improvements to the parks and solid waste departments that had been made possible through fees. Boice said he anticipates being able to eliminate the parking fee for county parks soon as capital projects are completed, and that the newly painted and repaired whales will be returning soon to River Forks Park.

He also said things are looking up financially at the county, thanks to fees, grants and recent court decisions that will increase timber harvest revenues that help fund the county’s budget. When he started five years ago, Boice said, the county was spending $11.5 million per year out of its reserve funds and would have fallen off the fiscal cliff in 3.5 years. It was a lot like signing up to be captain of the Titanic, he said. But the county’s still afloat and last year put $350,000 back into the reserves, he said.

Reporter Carisa Cegavske can be reached at ccegavske@nrtoday.com or by phone at 541-957-4213.