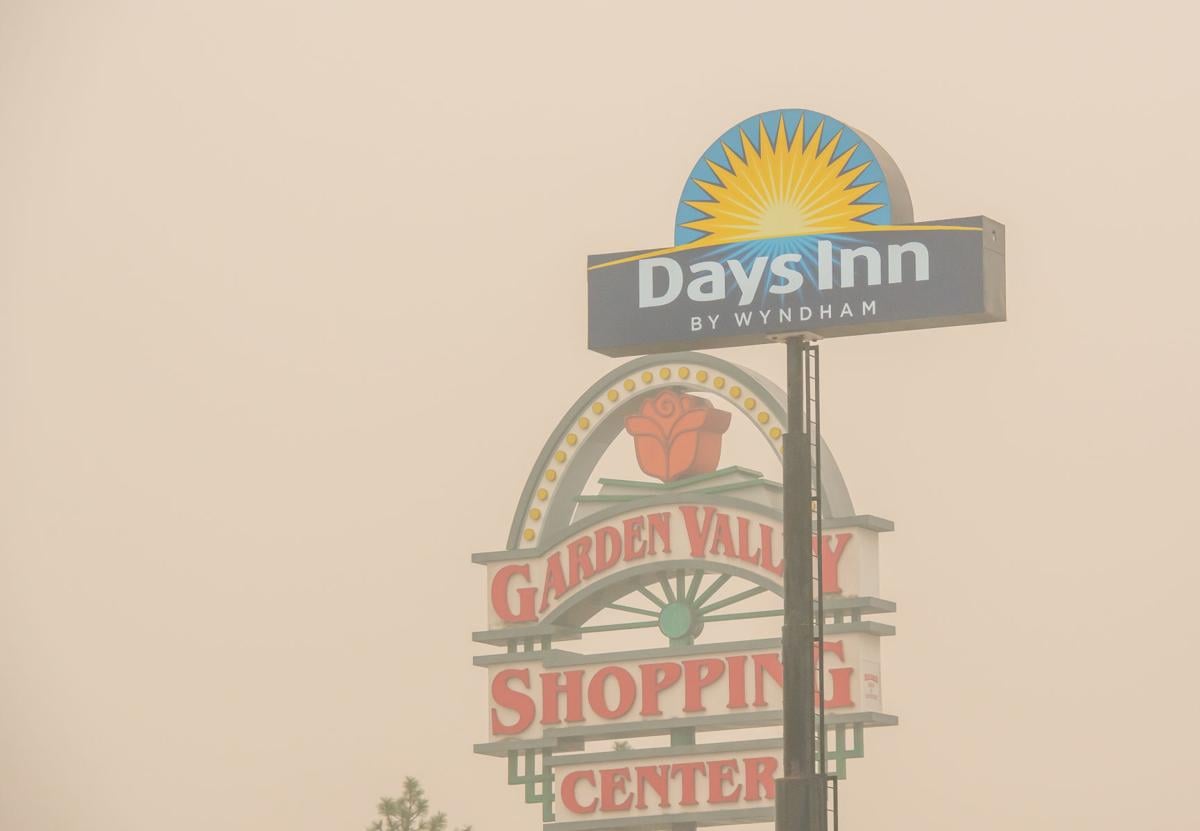 The Days Inn by Wyndham located behind the Garden Valley Shopping Center has been accused of price gouging by some evacuees from the Archie Creek Fire. 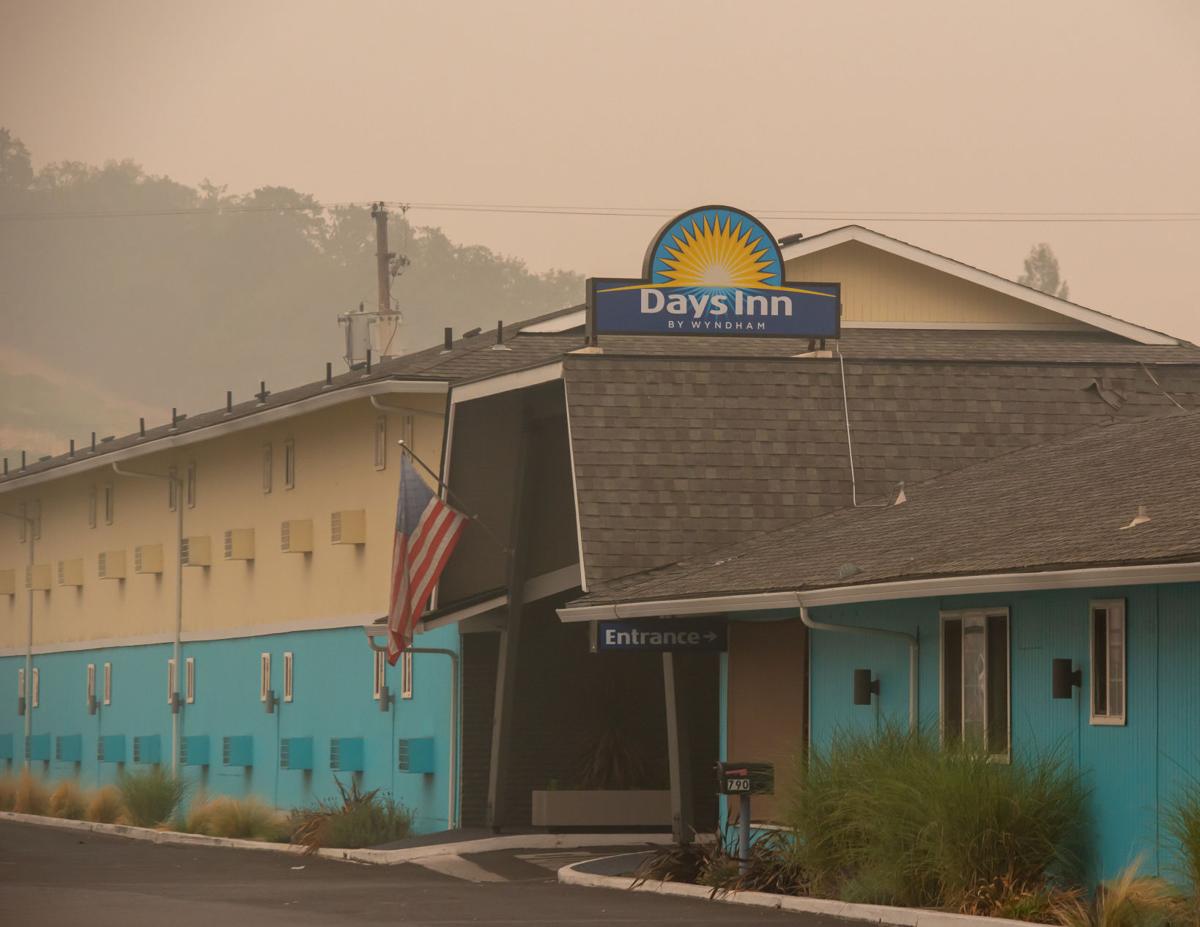 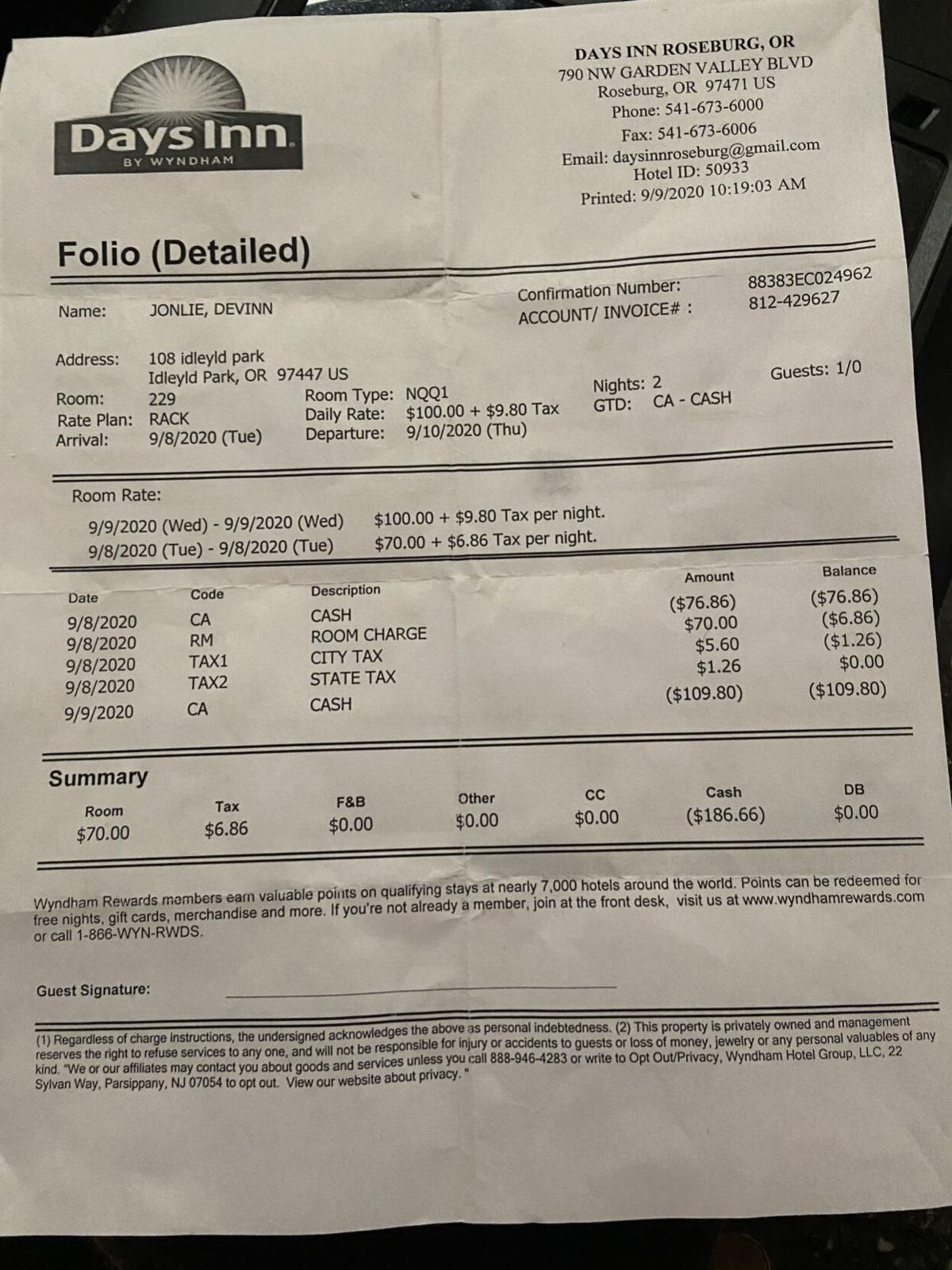 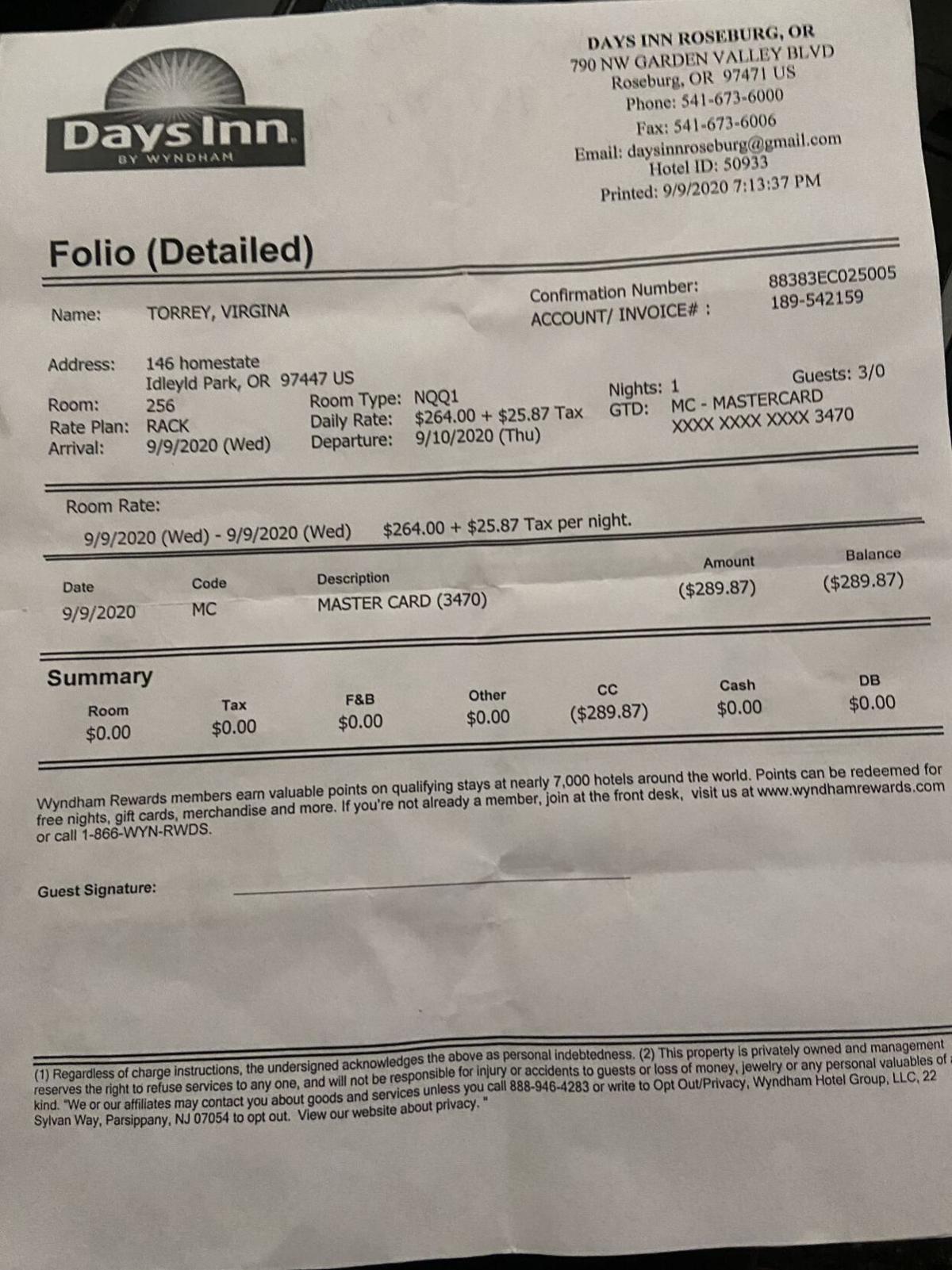 The Days Inn by Wyndham located behind the Garden Valley Shopping Center has been accused of price gouging by some evacuees from the Archie Creek Fire.

The Days Inn by Wynd-ham in Roseburg has been fined $31,000 for overcharging dozens of area residents who sought rooms after fleeing the Archie Creek Fire.

SUBH Investment LLC, which does business as Days Inn by Wyndham in Roseburg, entered into an agreement, known as an assurance of voluntary compliance, with the Oregon Department of Justice on Monday. The hotel is located at 790 NW Garden Valley Blvd.

Devon Kumar, who lives in a suburb of Portland, is listed with the state as the owner of the Days Inn. He declined to comment Wednesday. Kumar was represented in the agreement by Portland attorney James Dowell.

Virginia Torrey was tired, scared and just plain frazzled. Not to mention running out of money.

Kumar has already refunded 31 customers a total of $4,860 in overcharges, according to court documents.

If the Days Inn violates any terms of the agreement it can face contempt of court charges and fines of up to $25,000 for each violation. The outstanding balance on the fines would also be due immediately.

At the time of the fire, the Days Inn rented or offered to rent at least 31 rooms at a price that was at least 15% higher than the normal room price, the agreement said. The single highest rate Days Inn charged in October was $150 a night, yet during the fire the hotel rented 12 different rooms for over $200 a night, including six rooms for over $300 a night, the Department of Justice said.

Trinity Barney, who owns and manages the Idleyld Trading Post, said after the Archie Creek Fire evacuation order came she set out to help her staff find places to stay. A number of them went to the Days Inn. That’s when the problems started, Barney said.

The workers were quoted prices ranging from $79 a night to nearly $300, according to receipts from the hotel. Barney said she called Days Inn corporate headquarters and was told she had to deal directly with the manager at the hotel. That didn’t go well, she said.

“He tells me that’s what they charge, it’s not up to them, and they have no control over the prices,” Barney said at the time. “He said it’s supply and demand and then said, ‘Lady I don’t know what you want from me.’ Eventually, he walked away and locked himself in his office. There were a lot of frustrated people in that lobby and we were told there was nothing they could do.”

When told Wednesday of the Oregon Department of Justice action, Barney said she is grateful the price gouging didn’t fall through the cracks like so many other things have since COVID-19 arrived. She also said she’s glad the state is holding Kumar accountable and pointed to the situation in Texas — where residents are being charged thousands of dollars for electricity they used during a snow storm — as an example of what can happen during weather emergencies.

“I’m glad that the people will get their money back and hopefully this will set a precedent for other hotels to say, ‘You don’t get to do that,’” Barney said.

Barney also said that as a fellow business owner she knows that sometimes mistakes occur and that she hopes Kumar and management at Days Inn learned from what happened.

“Kindness is the most important thing we can show right now, and what they did was the opposite of that,” she said. “What they did caused additional, undue hardship to a lot of people that a lot of us care about.”

‘SHAME ON HIM’Virginia Torrey, an employee of the Trading Post who lived in the RV park nearby before being evacuated, said she could not believe the $289 bill she got from the Days Inn for the double room she stayed in one night.

“That’s a month’s rent for me,” Torrey said then. “I’m bouncing around, I didn’t have anywhere else to go. I really needed that money just to survive.”

Torrey said she got a basic room with two beds. When she went to sign in she saw the quoted price — $289 — and told the person at the desk that there must be a mistake. There was not, she said she was told.

The next morning when she checked out, Torrey said she tried to get the front desk attendant to reduce the price, but he refused.

“I’ve never paid that much money ever for a room in Roseburg,” she said. “He said, ‘That’s what the prices are now.’ He was very snippy and rude.”

Torrey said she felt betrayed by the exorbitant bill, especially since it happened when she was fleeing a fire and living on her last dollars.

“This is just heartbreaking,” she said then. “We’re worried about our homes and ourselves and these people are taking everything I’ve got, seriously.”

On Wednesday, Torrey said that Kumar told her he was going to give her a refund, and then said he would give her a free night’s stay, but did neither.

“Shame on him,” Torrey said when told of the agreement. “It was heartbreaking. There were people that couldn’t’ pay and had to try and find somewhere else. There were so many people that were just devastated by everything, and to be treated like that was horrendous.”

Kumar said at the time that the complaints of customers being overcharged amounted to “a big misunderstanding.”

He also said then that most of the blame had to do with the system that Days Inn uses to set prices, which relied on algorithms that take into account available bed space.

“The computer sets the algorithm and as hotel business increases, the rates increase. I have nothing to do with that,” he said at the time.

About a week later, Kumar said he refunded 10 to 15 customers and gave four or five of them several nights free stays in the hotel.

“I’m really sorry for the misunderstanding,” he said. “We’re here to help the people. If anyone else complained about the rate I have no problem giving them their money back.”

Kumar said he has owned the hotel since 2013 and that he had often helped people out over the years.

Complaints of price gouging became prominent last summer as wildfires burned more than 1 million acres across the state and displaced an estimated 40,000 people.

Brown declared an “abnormal market disruption” after reports showed an unusual increase in lodging rates for Oregonians forced to evacuate because of fire danger.

“During a statewide emergency, it is absolutely unacceptable to price gouge Oregonians who have already been hard hit and are facing devastating loss,” Brown said then.

Umpqua Watersheds: Knowledge is power, if we let it be

Trial set for man accused of stealing land in Elkton

Umpqua Watersheds: Knowledge is power, if we let it be

Talk about gouging: Trump Hotel D.C. has doubled its rates for March 4, when Trump is (and I am not making this stuff up, though Q can) going to be inaugurated as the 19th President of the United States. (And, according to Q, as ruler of the world.)

No where in this article was Trump or QAnon mentioned. But you still managed to bring it up... Rent Free!!

Willie: I seem to have provoked you to commit at least four grammatical errors, a misspelling, and a cliché in just two* sentences. Regrets. I hope you didn't sprain anything.

*or three, depending on how one counts an ellipsis without a period, followed by a space and a title-case cliché.

Bratscountry: First Amendment, dear. And an opportunity to not read what you find offensive.