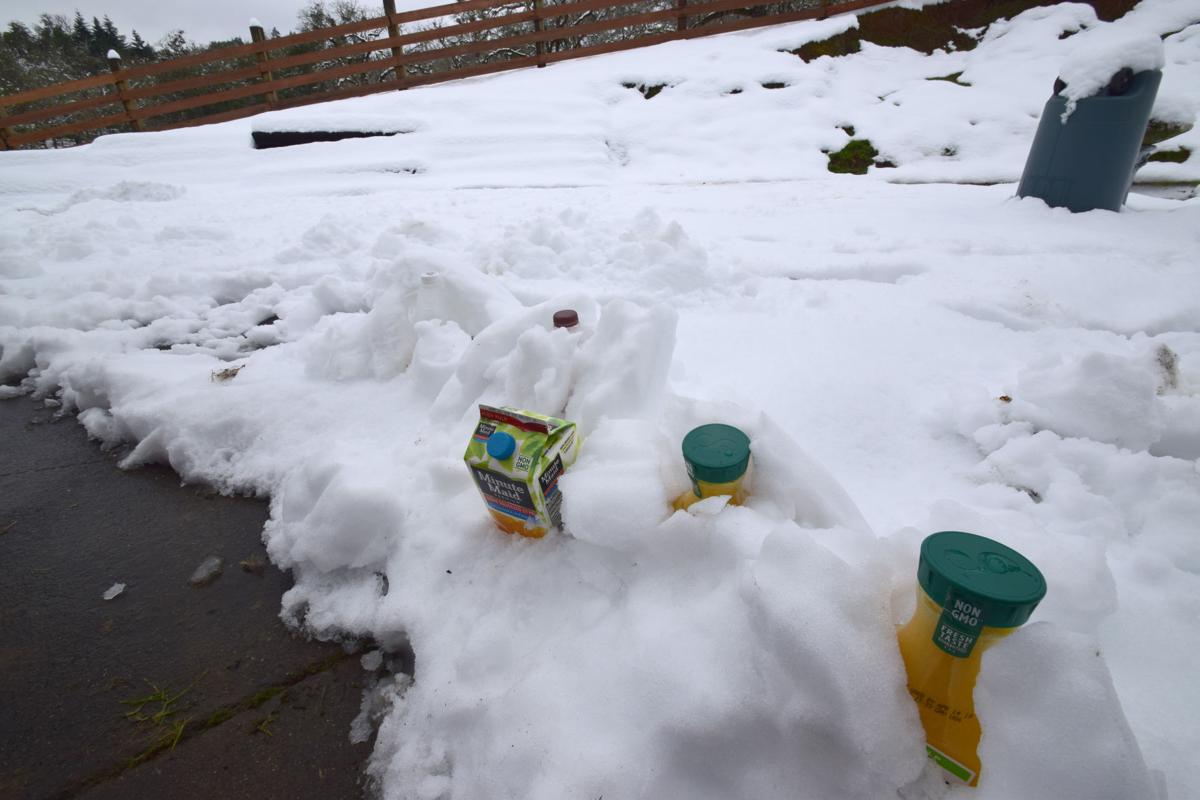 Refrigerated goods sit outside the home of Craig Reed of Roseburg in 2019. 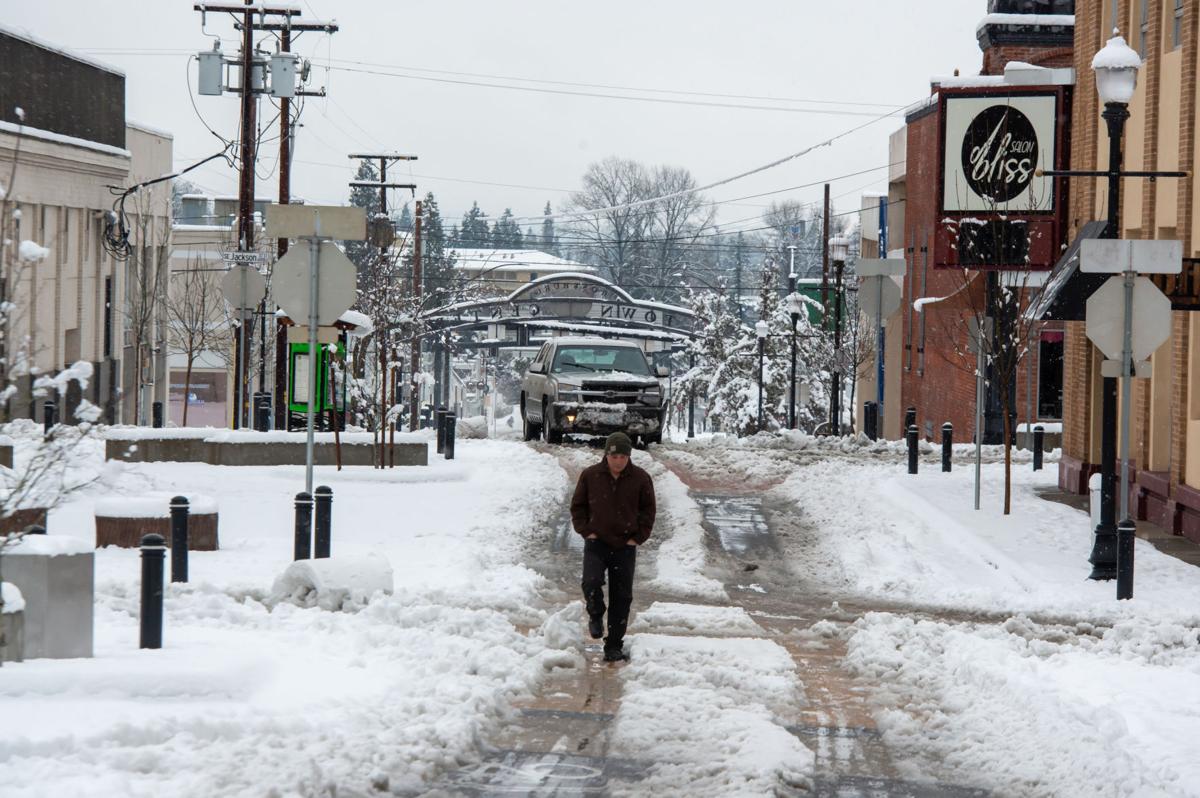 A man walks along Southeast Oak Avenue in downtown Roseburg in February 2019. Foot traffic was more common than vehicle traffic as a thick layer of unexpected snow closed schools and businesses throughout the area. 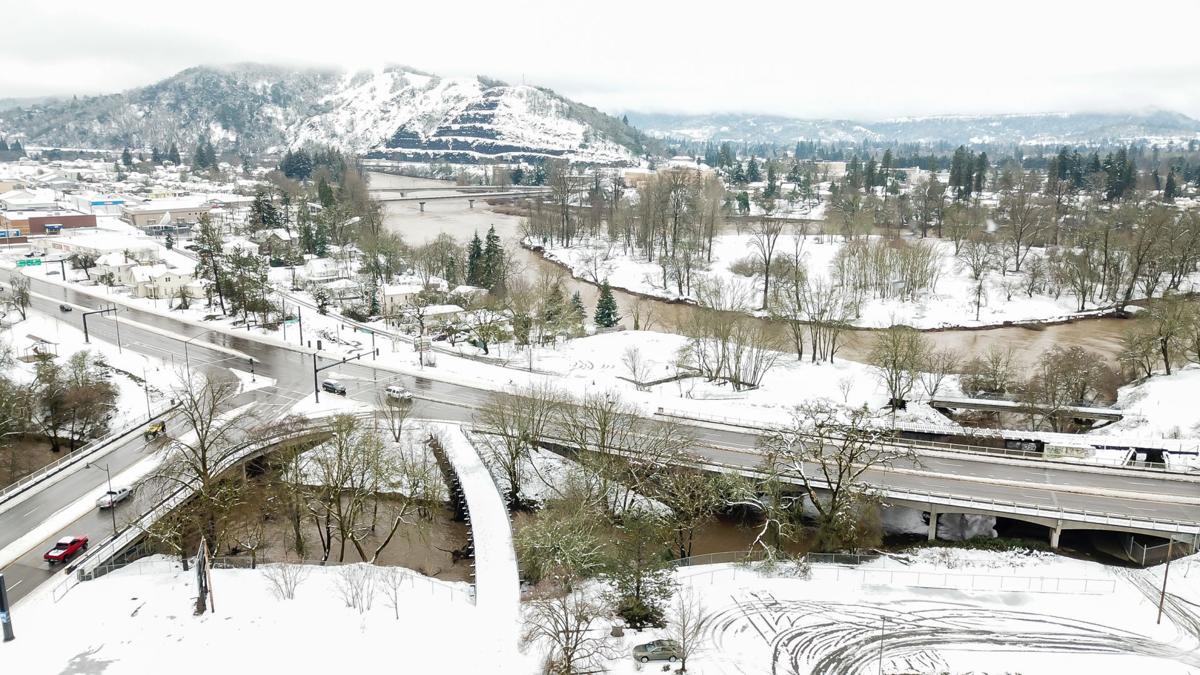 Roseburg continues to lay under a blanket of snow in this drone photo taken Tuesday morning. A mixture of rain and snow, along with rising temperatures, is expected for the rest of the week.

Refrigerated goods sit outside the home of Craig Reed of Roseburg in 2019.

A man walks along Southeast Oak Avenue in downtown Roseburg in February 2019. Foot traffic was more common than vehicle traffic as a thick layer of unexpected snow closed schools and businesses throughout the area.

Roseburg continues to lay under a blanket of snow in this drone photo taken Tuesday morning. A mixture of rain and snow, along with rising temperatures, is expected for the rest of the week.

The weather forecast for Feb. 24, 2019, called for heavy overnight rain and a possibility of flooding in low lying areas.

Something in the atmosphere shifted, and threw virtually all of Douglas County into a state of chaos.

Instead, wet, heavy snow began Sunday afternoon and continued into Monday morning, covering the valley floor with 4 inches. Trees were toppled. Power lines pulled to the ground. Many rural roads were made impassable. More than 31,000 people were without power. Interstate 5 was shut down from Cottage Grove to Glendale, as were all highways in and out of the Roseburg area due to downed trees and power lines.

The snow was unrelenting, continuing for another two days during one of the more damaging weather events Douglas County had seen.

“It was definitely a surprise,” said Darrin Neavoll, Region 3 Manager for the Oregon Department of Transportation. “We were getting geared up for flooding and heavy rains.”

Instead, ODOT, utility company workers and first responders were thrust into full scramble mode, clearing roads and trying to restore power to customers who were left in the dark, some for days and others for weeks.

Nancy Pahl lives near the top of Wild Iris Lane on a hill behind Sunshine Park east of Roseburg. Having lived on her property since 1984 — at 1,300 feet elevation — Pahl is no stranger to snow.

This particular event was different.

“The first night, I had 10 inches of snow and by the next day, there were 20,” said Pahl, now 70. Pahl was without power for seven days, a time that included a medical emergency.

Once she returned home from the hospital, another neighbor arrived with a generator so she could restore power to her home.

“My neighbors were all looking out for me,” Pahl said.

Her story was similar to many in the county as neighbors pitched in to help each other with food, supplies and support, not unlike the outpouring of support this past fall as residents were displaced during the Archie Creek Fire.

“Snowmageddon,” as it was called, proved a valuable training tool for ODOT, Neavoll said.

“It gave us more opportunities to work with other agencies, get the right contacts and set up better communications protocols,” Neavoll said. “After that storm, we did a much better job during the fire response. We had a good coordinated effort there.”

Eric Johnson, communications specialist for the City of Roseburg, said that when the infamous snowstorm struck, the city simply wasn’t prepared.

“As most residents know from firsthand accounts, our city, by all accounts, was simply not prepared for the snow levels that came from this event,” Johnson said in an email. “And it is by no fault of the city, but simply due to the fact that these types of weather events rarely happen.”

In fact, Johnson’s present job was created out of the chaos that surrounded Snowmageddon. He said the lessons learned out of that weather event have aided in improved communications related to basic city infrastructure.

“There were more tactical level lessons learned from Snowmageddon,” Johnson said. “For instance, our water treatment plant, previous to the weather event, did not have emergency backup power. Had we not gone through this event, we probably would not have identified backup power as a need for quite some time.

“Another thing we didn’t foresee was the emergence of remote work,” Johnson said, referring to City of Roseburg employees working from home during the coronavirus pandemic. “It is these little silver linings that we have identified which will allow us to address future emergency events in a better manner.”

As the two-year anniversary of Snowmageddon approaches, Oregon found itself in the cross hairs of another potentially dangerous winter storm. Heavy snow and freezing rain had been predicted for a majority of western Oregon, especially in the Cascade Mountains from California to southern Washington.

As the storm system moved closer, it shifted north, instead bearing down on cities in the northern Willamette Valley while southwestern Oregon stayed relatively unaffected.

Pahl admits that early forecasts of the most recent event had her nervous, and she was quite relieved when the storm shifted course.

“I didn’t want to do that again,” Pahl said. “I wouldn’t wish that on anybody.”