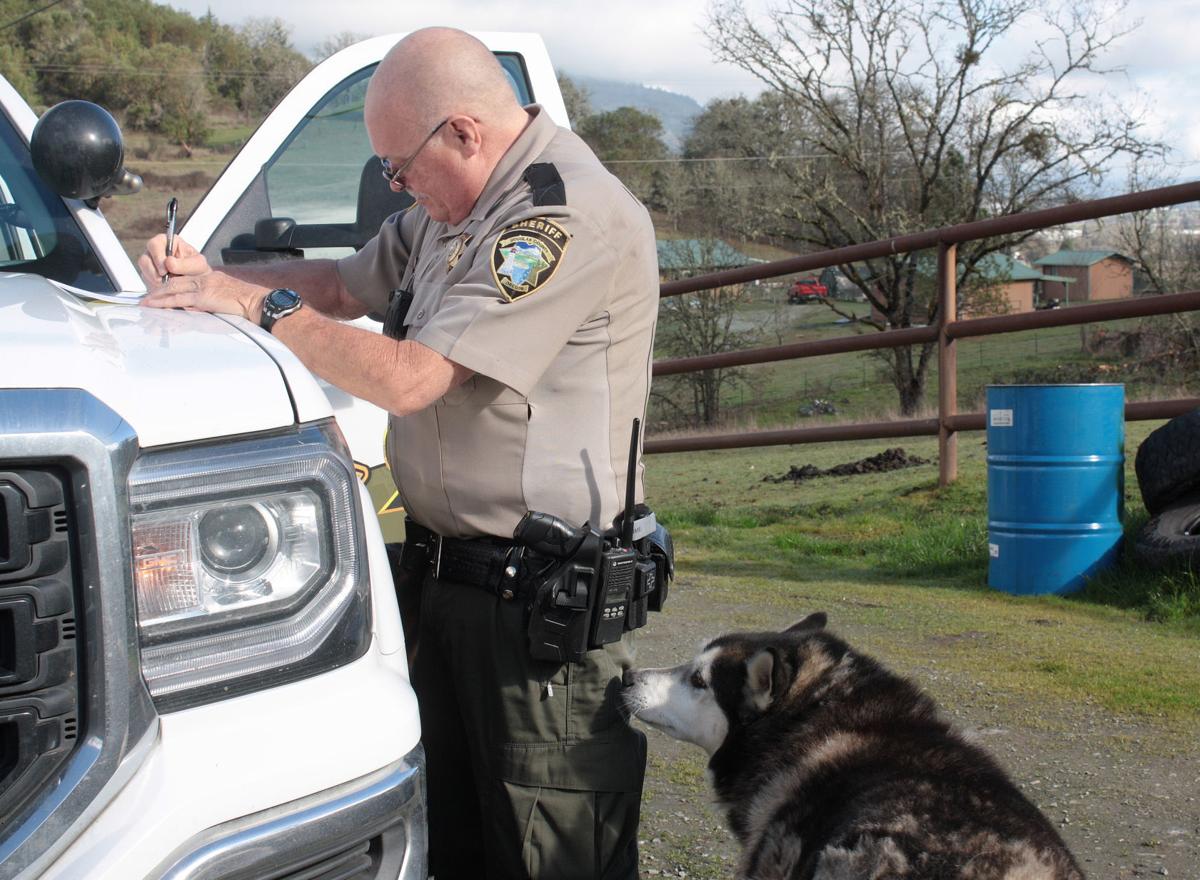 Deputy Lee Bartholomew writes a note for a homeowner after responding to a loose dog call in Riddle. 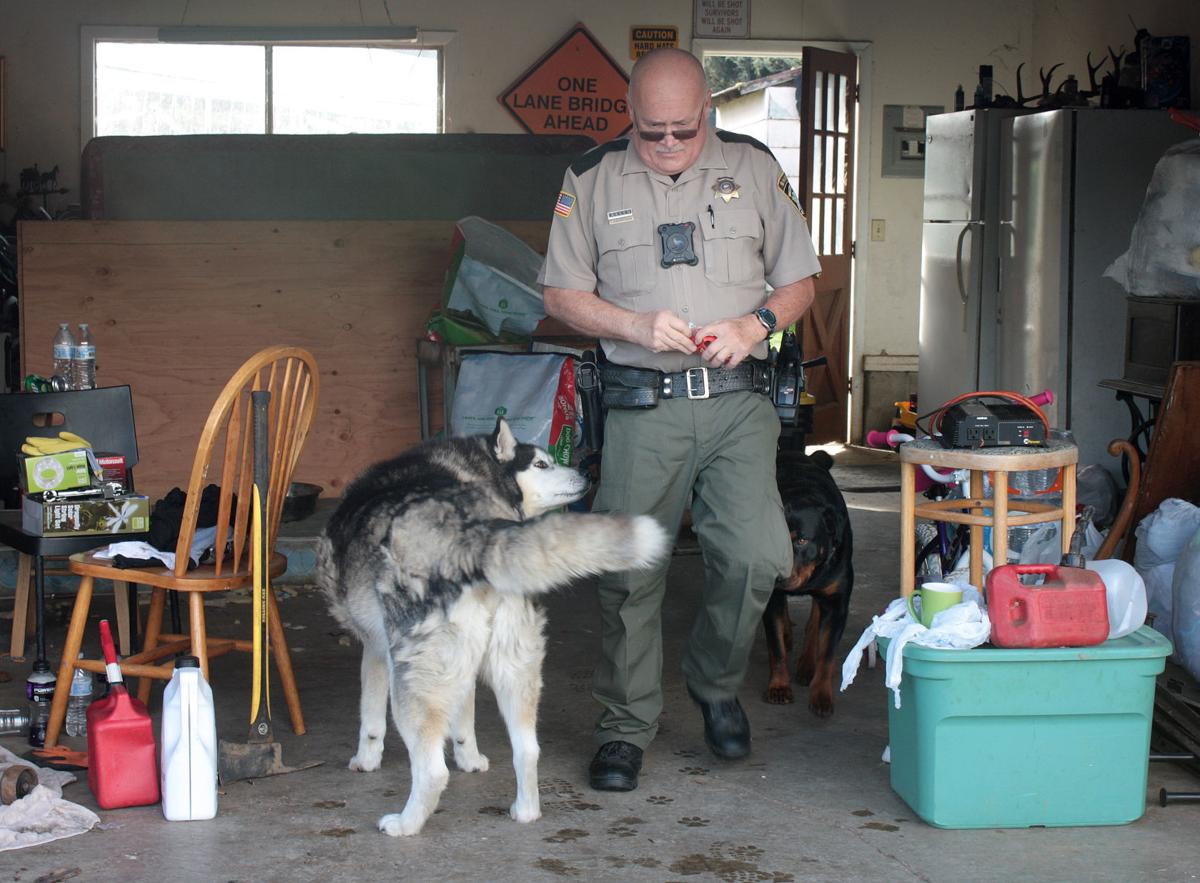 Deputy Lee Bartholomew responds to a loose dog call at a residence in Riddle. 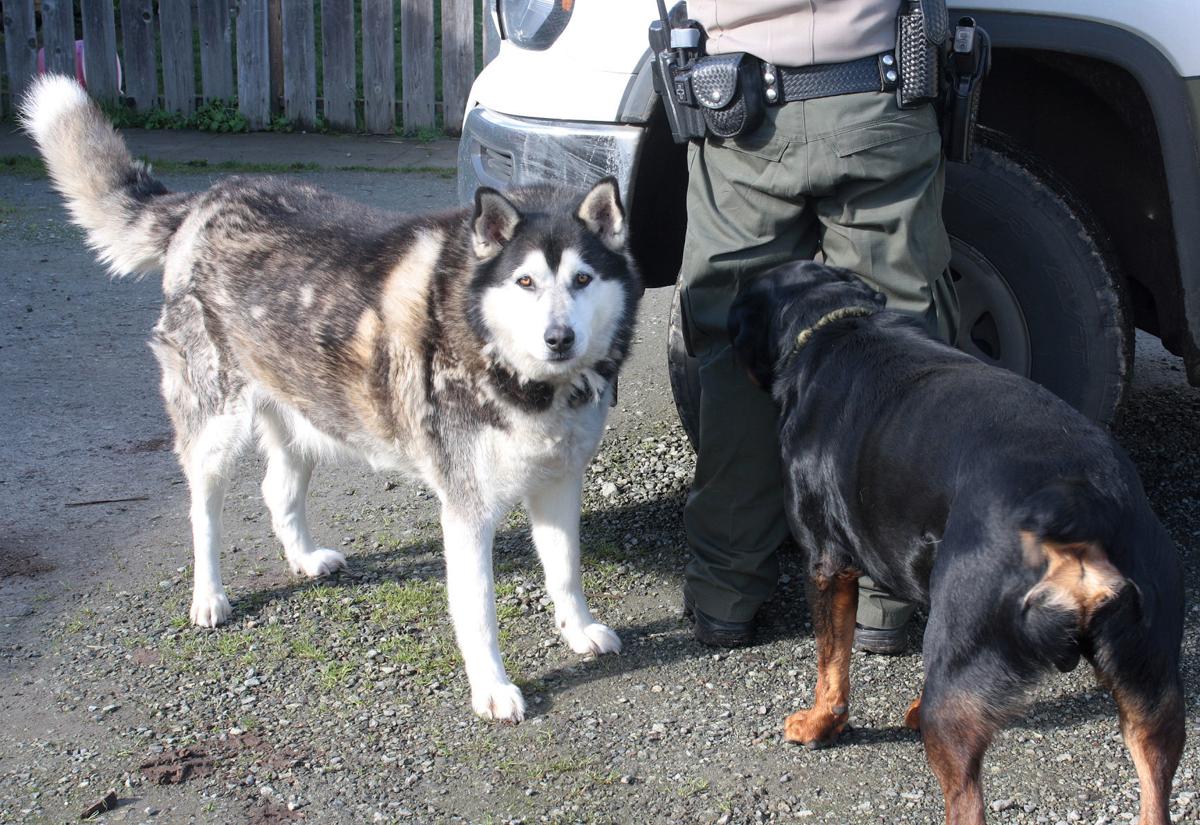 Two dogs sniff Deputy Lee Bartholomew as he responds to a loose dog call in Riddle.

Deputy Lee Bartholomew writes a note for a homeowner after responding to a loose dog call in Riddle.

Deputy Lee Bartholomew responds to a loose dog call at a residence in Riddle.

Two dogs sniff Deputy Lee Bartholomew as he responds to a loose dog call in Riddle.

The chilly morning fog is just starting to give way to the heat of the day as Deputy Lee Bartholomew pulls up to his second loose dog call of the day.

A neighbor has complained that the dogs across the way are running rampant and have eaten her chickens in the past.

Bartholomew pulls up to the residence and a large Rottweiler, his body wagging back and forth, runs up to the car to greet him. The deputy has a calm demeanor that puts even those who are in trouble at ease.

When he’s trying to coax rogue dogs towards him, his voice takes on a falsetto tone, to avoid a deep tenor that might cause a dog to run the other way.

“A lot of officers wouldn’t get out of the car if they saw that dog,” he jokes.

Bartholomew opens the door and gives the friendly dog a pat.

The owner isn’t home, so he leaves a note as the Rottweiler and a husky mix continuously sniff him. With the note secured to the door, Bartholomew gets back into his truck and drives off to his next call — another loose dog.

“I don’t think I’ve been caught up on assignments since it went down to just me,” Bartholomew said.

He’s referring to the time when the animal control staff was downsized from three deputies to one. That was in 2009.

Being Douglas County’s only animal control officer means dealing with all of the county’s animal-related calls, of which there are many, and doing lots and lots of driving.

With almost 28 years on the job, Bartholomew has dealt with it all: bears, buffalo, cougars, tigers, monkeys, kangaroos, the list goes on. His least favorite?

The source of his aversion was a stray llama that he was trying to wrangle into the back of a trailer.

“We just got in a fight,” Bartholomew explained. In the process, the llama reared up and Bartholomew said he pulled a stomach muscle, causing him to have to take some time off.

“That llama kicked my butt,” he said.

Despite dealing with unruly animals on a daily basis, Bartholomew said he’s only been bit seven times.

Almost all those bites were from dogs under 20 pounds.

“As far as dogs go,” he said, “I’m much more worried about a heeler or even a small dog than a pit-bull.”

He said he rarely comes across pit-bulls that are mean to humans. But little Chihuahuas?

“They’ll come right at you,” he said.

He said dog bite calls take up about a quarter of his time, but that’s not limited to canine nips.

Recently, he said he had to deal with both a bat bite and a stray ferret bite.

Bartholomew is full of anecdotes of the strange and bizarre things he’s experienced in the time he’s been on the job.

“We’ve had calls about just about everything you could imagine,” he said.

He recalled a time when he went on a kangaroo chase for six weeks. Or the time when a Roseburg woman was trying to sell mutts as purebreds to residents in Portland.

But he does more than just police work. Bartholomew helped draft legislation that made animal neglect a felony if it was in front of a child or a second offense. He’s also organized volunteer groups that help him seize animals from hoarders in the county.

Once, he had to seize 700 animals from a house in Drain, he said.

But most of the time, Bartholomew said he just wants to educate people on how to take proper care of their pets or livestock.

“My goal is not to seize animals, my goal is to educate them and point them in the right direction,” Bartholomew said.

If he had his druthers, he would start his calls at the furthest location and work his way in back to the sheriff’s office.

But instead, he often finds himself traveling back and forth to the far reaches of the county.

“It was a hard thing to adjust to the fact that I’d never get caught up,” he said.

For the man who gets called to just about every animal-related incident in the county, his age has his bosses worried.

“Now they’re worried about when I’m going to retire,” he said. It’s something he doesn’t foresee in the near future.

Right now, the sheriff’s office is working with Oregon State University — Bartholomew’s alma mater — to offer college credit to students who participate in a cadet program over the summer and hopefully find Bartholomew’s replacement.

But for now, he’ll still be in his truck, responding to as many calls as he can in a day.

And his supervisors wonder why he's always "dog tired" at the end of the shift.