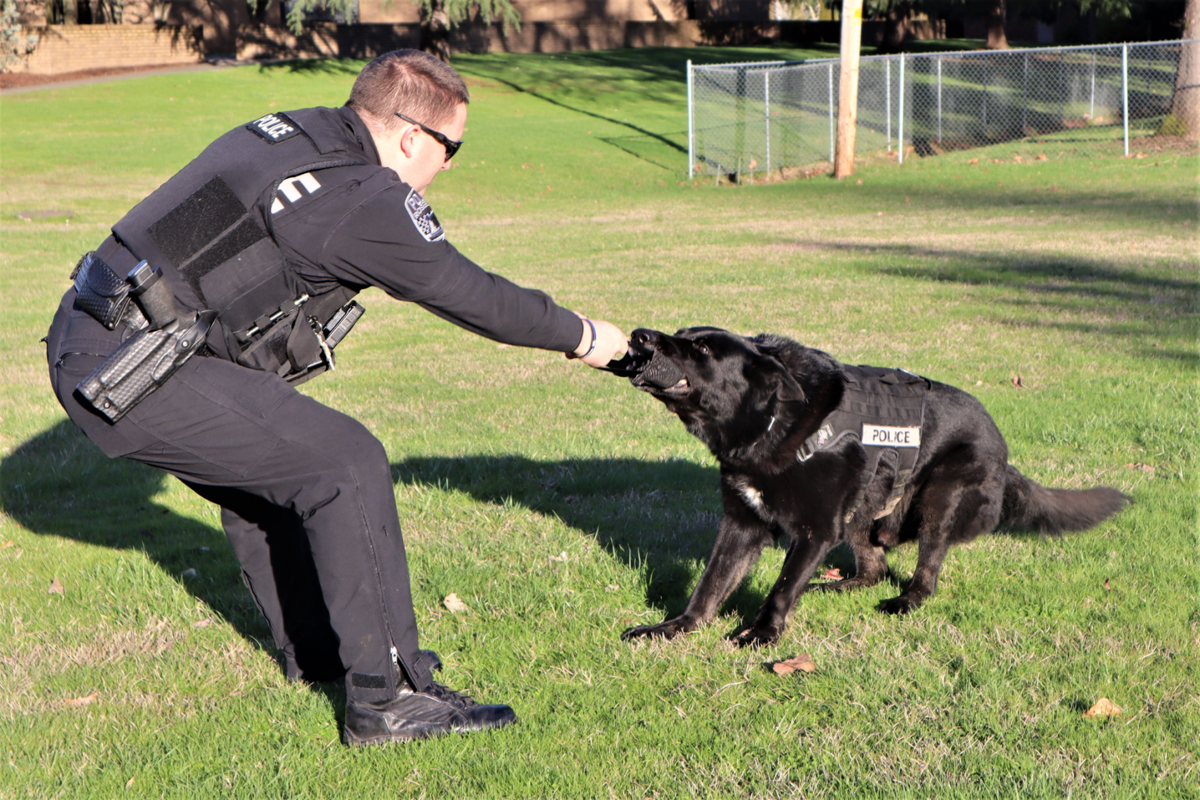 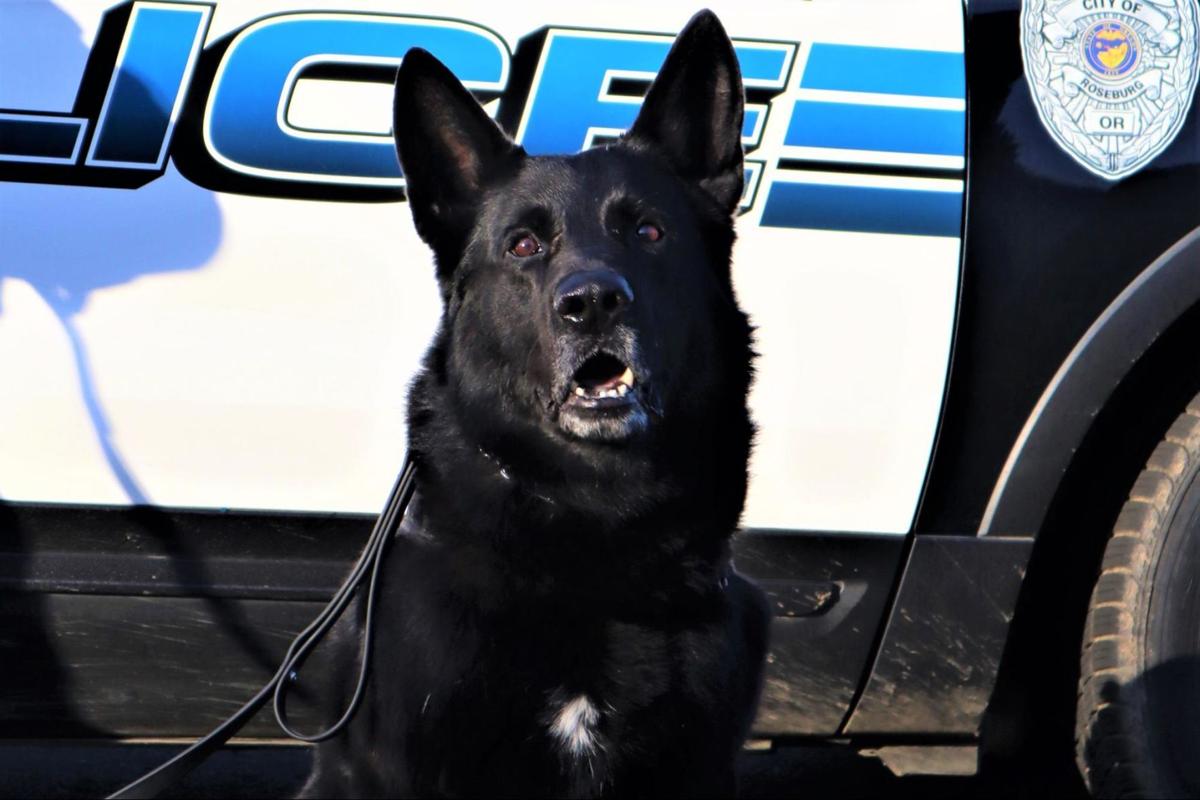 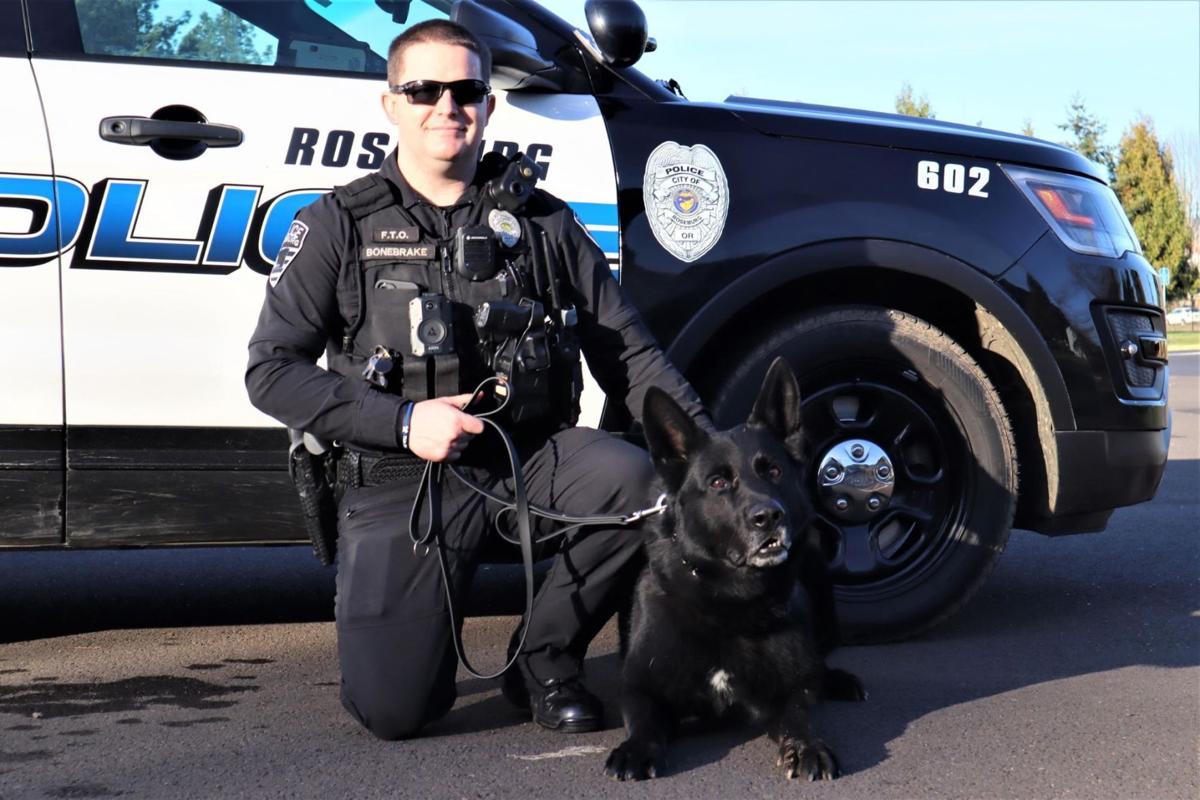 Officer Chris Bonebrake and his K-9 Axel in front of his patrol car on Feb. 4. 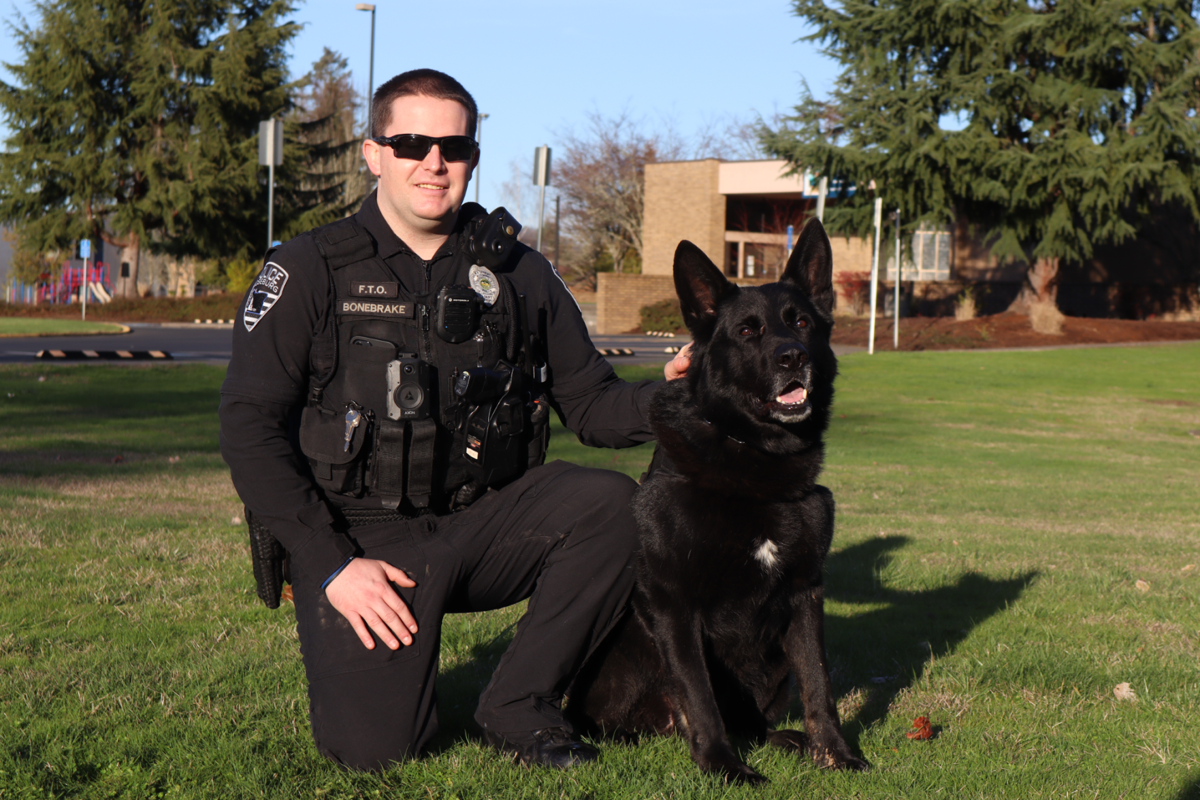 Officer Chris Bonebrake and his K-9 Axel on Feb. 4.

Officer Chris Bonebrake and his K-9 Axel in front of his patrol car on Feb. 4.

Officer Chris Bonebrake and his K-9 Axel on Feb. 4.

Axel, an 8-year-old German shepherd, has served with the Roseburg Police Department for more than five years and more than three of those years he spent with Roseburg police officer Chris Bonebrake.

Over those years, they have built a strong connection.

“Axel tracks human odor and apprehends people by biting and holding them until that person is in custody,” Bonebrake said. “This makes arresting dangerous suspects much safer for officers.”

The Roseburg Police Department has had K-9 units since 2011.

Axel has helped apprehend nearly 50 criminals in the last year, some that made Bonebrake especially proud.

“Axel deployed to a residential neighborhood where a dangerous criminal ran from police and was hiding in someone’s backyard,” Bonebrake said. “Axel tracked through the neighborhood and found the guy hiding underneath a chair in the backyard of someone’s house. Axel bit the guy and pulled him out where I could see him and his hands. If it were not for Axel, we would never have found the bad guy.”

Bonebrake and Axel went through training all over the state and continue to train every week.

“Our training was 1 1/2 months long and took place all over the state of Oregon. We do follow-up training on a weekly basis and also attend training camps throughout the state with other dog teams,” Bonebrake said. “Axel responds to German commands only and is from Germany.”

If you see a police dog in public, it is wise to ask to pet it.

“Some dogs are very stable and friendly towards other people, and some are not,” Bonebrake said. “We limit contact with the general public just so the dog maintains an edge and doesn’t become domesticated too much.

“He is not overly aggressive towards other people unless he knows he needs to be. He does not like strange dogs or cats and barks and growls at them when he’s in the car. Otherwise, he could care less. He would much rather work and play than get attention from anyone except me.”

The dogs on the police force are highly respected.

Roseburg Police Chief Gary Klopfenstein said a suspect will have more respect for a single police K-9 than a group of officers.

“Our patrol dogs are what we refer to as force multipliers; suspects often have more respect for one K9 than they would a group of officers,” Klopfenstein said.

Police K-9s have aided in the capture of hundreds of suspects, resulting in numerous felony and misdemeanor charges, the chief said.

“Our department immediately looks for assistance from a K-9 team when a suspect is fleeing, either on foot or in a vehicle. Police units responding to the scene know to immediately set up a parameter so the fleeing suspect tries to hide; this gives the K-9 a better opportunity to locate them,” Klopfenstein said. “Also, people often like the K-9s, and want to pet and adore them; this provides the officer an opportunity to have a positive interaction with a citizen when they might otherwise not have.”

Bonebrake describes his bond with Axel as “very strong, almost stronger than the bond I have with my fellow officers, simply because he rides with me in the car all day and I take him home every night. We have mutual respect as I know what Axel is capable of, and he knows his boundaries through years of training. We’re very, very close, and I am thankful that I get to work with him.”

Axel lives with Bonebrake at home where he has a kennel by the shop on his property.

“He is very comfortable in his kennel but would much rather sleep in the car,” Bonebrake said. “Axel is very easy to have at home and loves to chase his ball and play tug of war. He also plays tag with my other dog, and he just follows me around my property when I’m working outside.”

Most often, the dog retires with the handlers. “We like to give the dogs a good life after they’re done working since they’ve definitely earned it.”

There are a few different ways the community can help out the K-9 crew, including donating to the Friends of Umpqua Valley Police K9 Programs and donating bottles and cans to the program. Bags for the bottle drop are available at the Roseburg Police Department.

“Our dogs are capable of some amazing things, and they have aided in the apprehension of countless criminals in burglary, assault, and theft cases. Their abilities make the cost and time needed to start up a team well worth it, and their mere presence makes other officers much safer at work.”

Skylar Knox is a seventh grader at Fremont Middle School in Roseburg and a contributing reporter to The News-Review.

One dead, two seriously injured after shooting at Budget 16 Motel in Roseburg

One dead, two seriously injured after shooting at Budget 16 Motel in Roseburg

Umpqua Community College to host virtual live performance of 'In Love and Warcraft'
Two deaths, 27 cases and a longer list of vaccinators in today's COVID-19 report