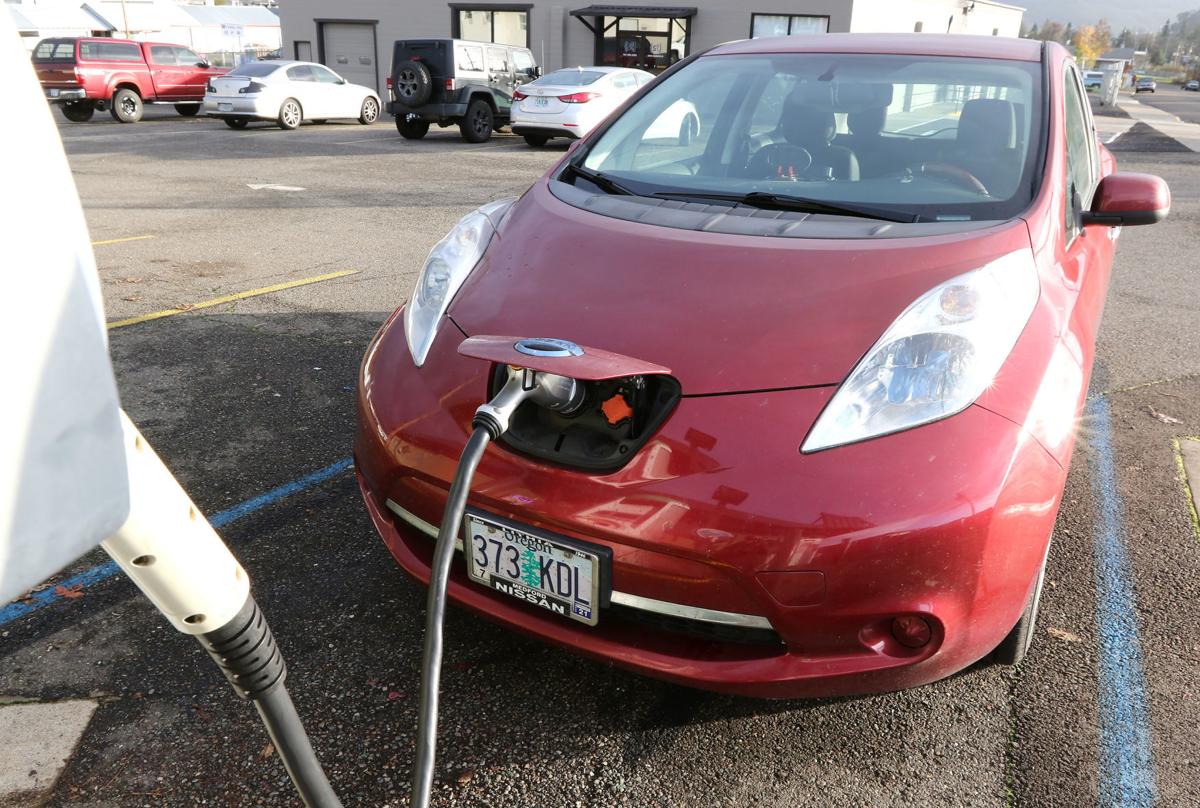 A vehicle utilizes a recharging station on Garden Valley Boulevard in Roseburg on Tuesday. 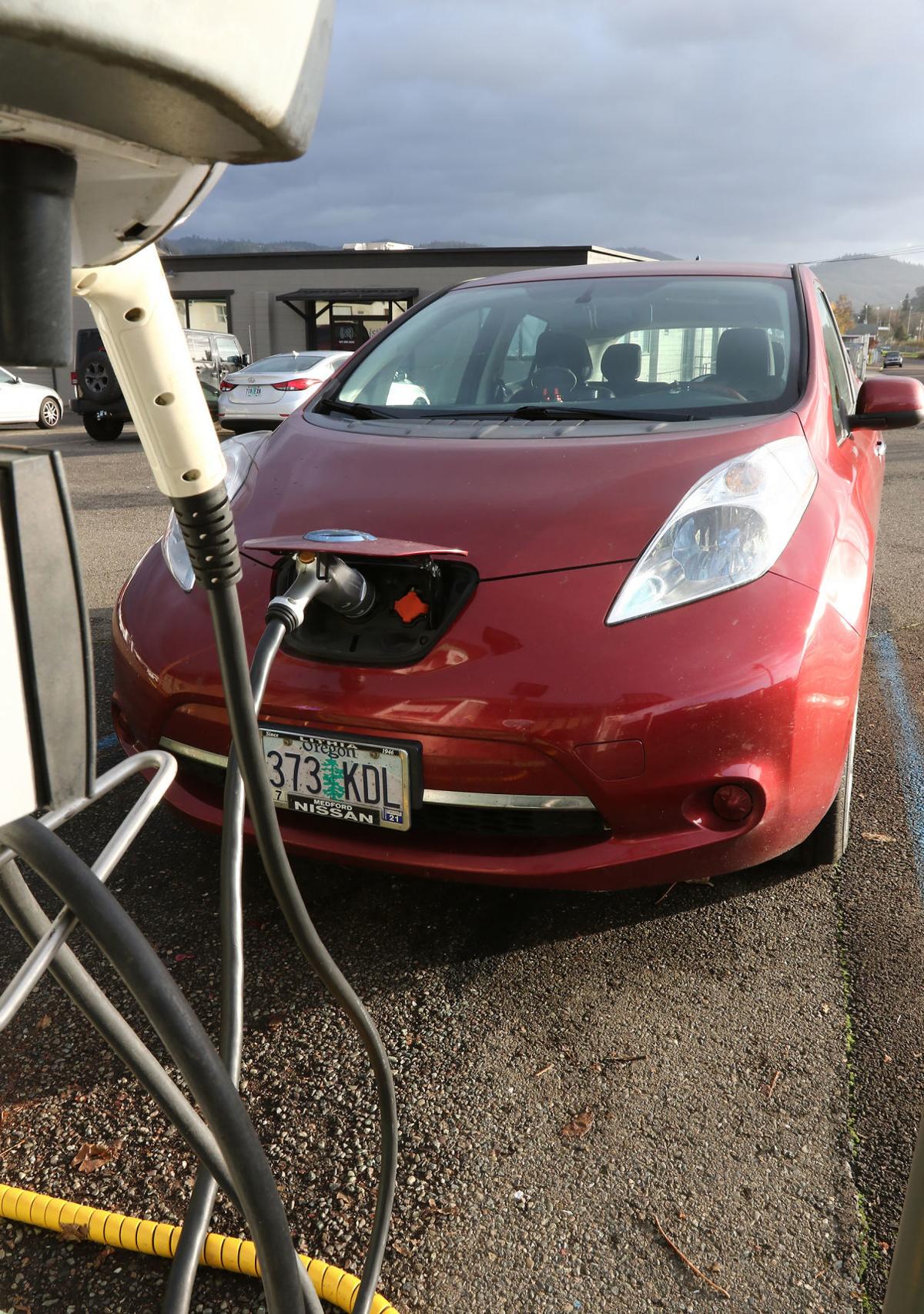 A vehicle uses a recharging station on Garden Valley Boulevard in Roseburg.

A vehicle utilizes a recharging station on Garden Valley Boulevard in Roseburg on Tuesday.

A vehicle uses a recharging station on Garden Valley Boulevard in Roseburg.

Owners of fuel-efficient and electric cars will pay more to register their vehicles next year than the owners of gas-guzzling pickups and SUVs.

The change stems from the “Keep Oregon Moving” transportation funding package approved by state legislators in 2017. Some of that funding comes from fuel tax increases, but those increases will mostly come from owners of cars with poor gas mileage. State officials say higher registration fees for green cars will even things out a bit.

Green car owners who don’t want to pay the higher registration fees have another alternative. They can enroll in a new program called OReGO, which charges drivers based on the number of miles they drive instead of the amount of gas they use.

Oregon transportation officials say paying per mile is a fairer way to share the costs of maintaining the roads. But environmental advocates say the strategy has unintended costs of its own, since it doesn’t account for the gas guzzlers’ contribution to the emissions that cause climate change.

Oregon Department of Transportation spokeswoman Michelle Godfrey said ultimately a shift to a pay per mile system like OReGO will be necessary for everyone because as vehicles become more fuel efficient or abandon fuel use altogether, the gas tax will become unsustainable.

She said a per-mile system helps return the state’s funding model to one in which drivers pay for what they use — miles of road. The gas tax isn’t accomplishing that anymore, she said, because vehicles get such different fuel efficiencies.

“One driver may be paying a lot more for a ‘mile’ than the driver in the next lane, only because they drive a more efficient model (yet still consume the road),” Godfrey said in an email.

“Chipping in a small percentage of that savings to support roads seems like a reasonable concession, and our research with (electric vehicle) owners shows they agree. It would be a tragedy to convert all our vehicles to ‘zero emissions’ and then have no good roads to drive them on because they are no longer funded,” Godfrey said in an email.

But Oregon Environmental Council Deputy Director Chris Hagerbaumer said in an email that electric vehicles currently account for a minuscule portion of the vehicles on the road and have very little impact on transportation funding shortfalls. Upping their registration fees isn’t a good idea because it could hinder adoption of clean vehicles, she said.

Hagerbaumer isn’t necessarily opposed to a pay per mile system, but she prefers a modified version.

“A per-mile fee is a fair way for drivers to pay their share of the wear and tear for using the roads, and it could be made even fairer by making sure that drivers also pay for the pollution their cars emit and the congestion they add to roadways,” she said. “This could easily be done by charging gas guzzlers more per mile driven and fuel efficient cars less per mile driven, as well as charging more per mile during rush hour.”

The OReGO system charges 1.7 cents per mile driven, and participants are credited for any state gas taxes they pay at the pump.

Vehicle owners with electric cars or cars getting 40-plus miles per gallon can drop their two-year registration fees to $86 by joining OReGO. An online calculator is available at MyOReGO.org/calculator to help determine what the new payments might look like.

That's Oregon for ya, backwards thinking.

When you spend $80,000 on an electric car so you can avoid the gas tax but then the government just creates a whole new tax for you.... GOT'EM!! [whistling]

Clearly, we will need to move to an arrangement where road taxes bear some relationship to the need for roadbuilding and road repairs; however, introducing taxes on efficiency is a wrong move. As conservatives are often fond of asserting: what you tax, you will get less of. Tax efficiency, and reward inefficiency – – this simply makes no sense.