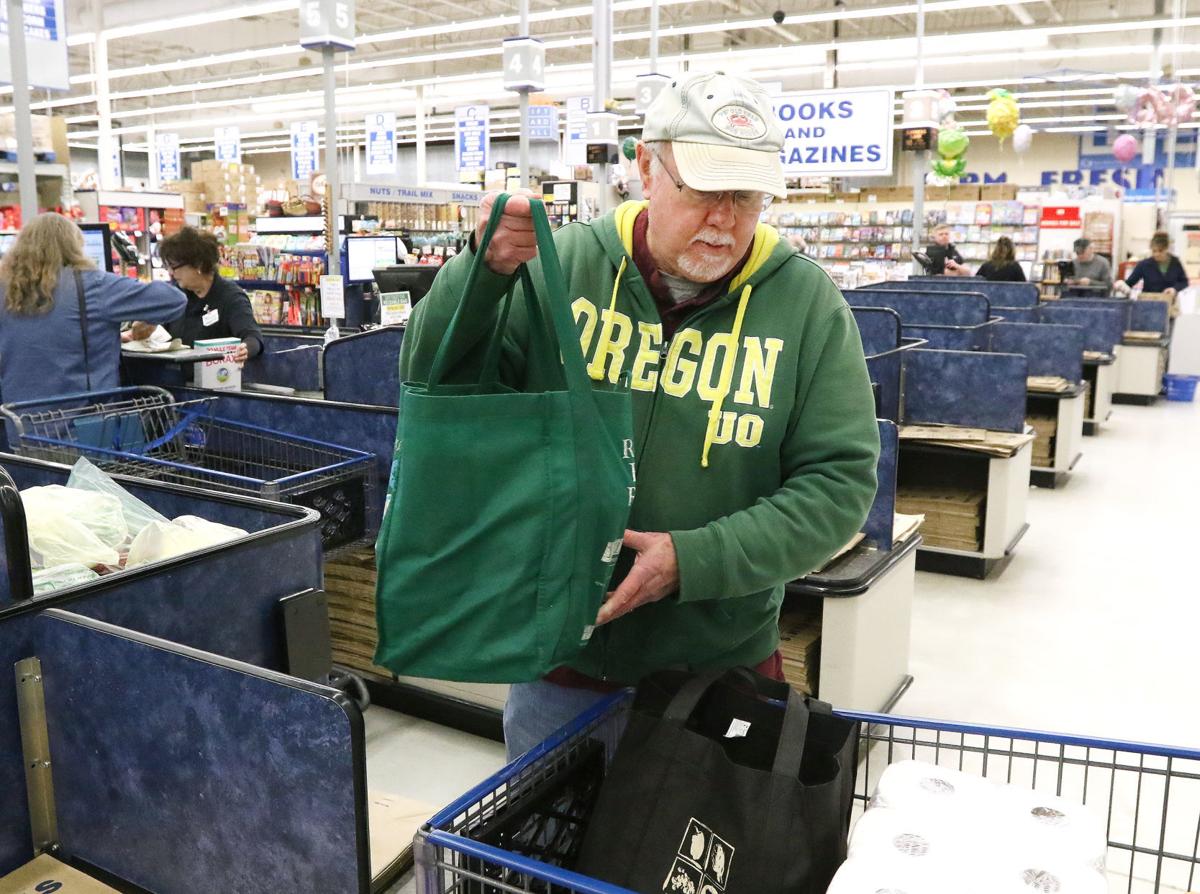 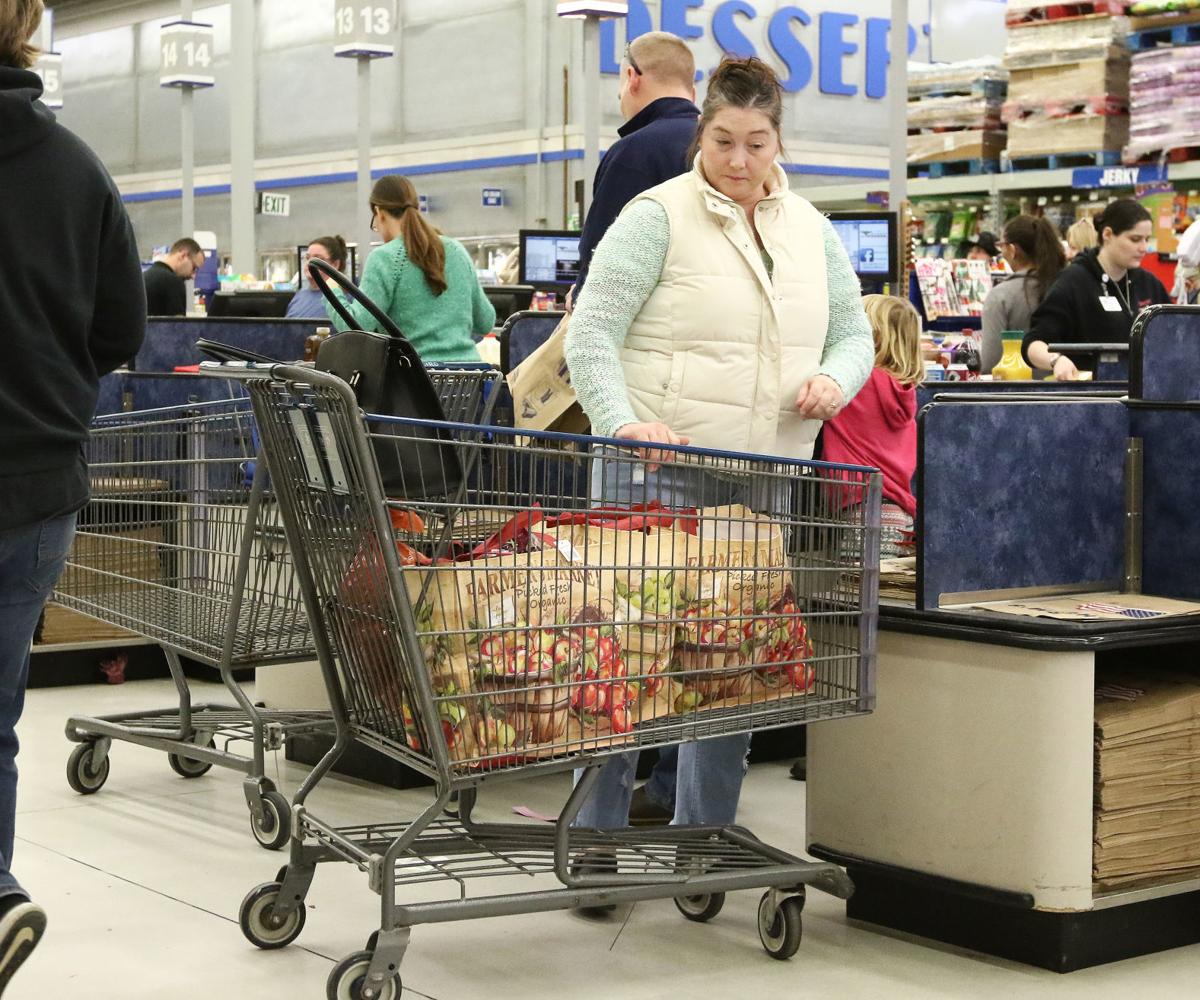 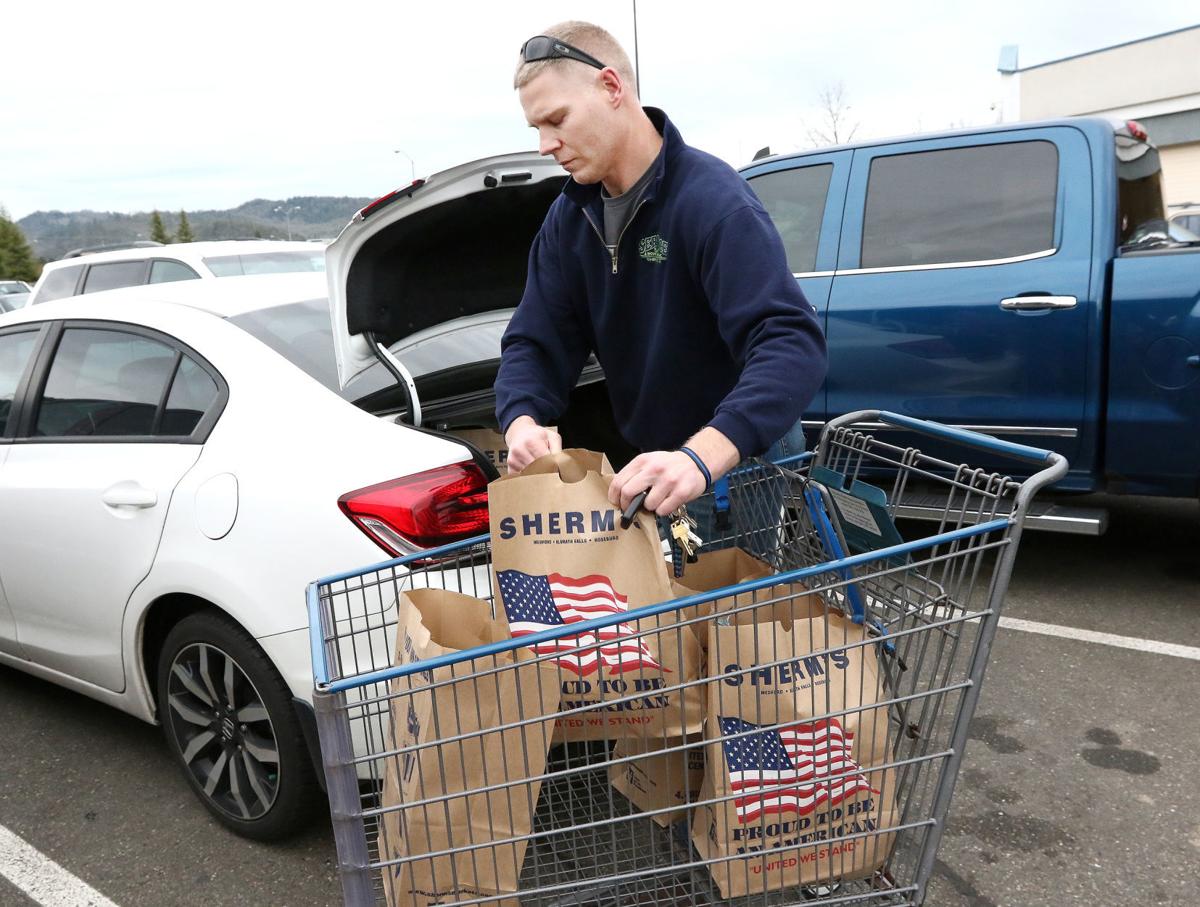 George Sheppard of Roseburg chose paper bags for his groceries while shopping at Sherm’s Thunderbird Market in Roseburg on Tuesday. 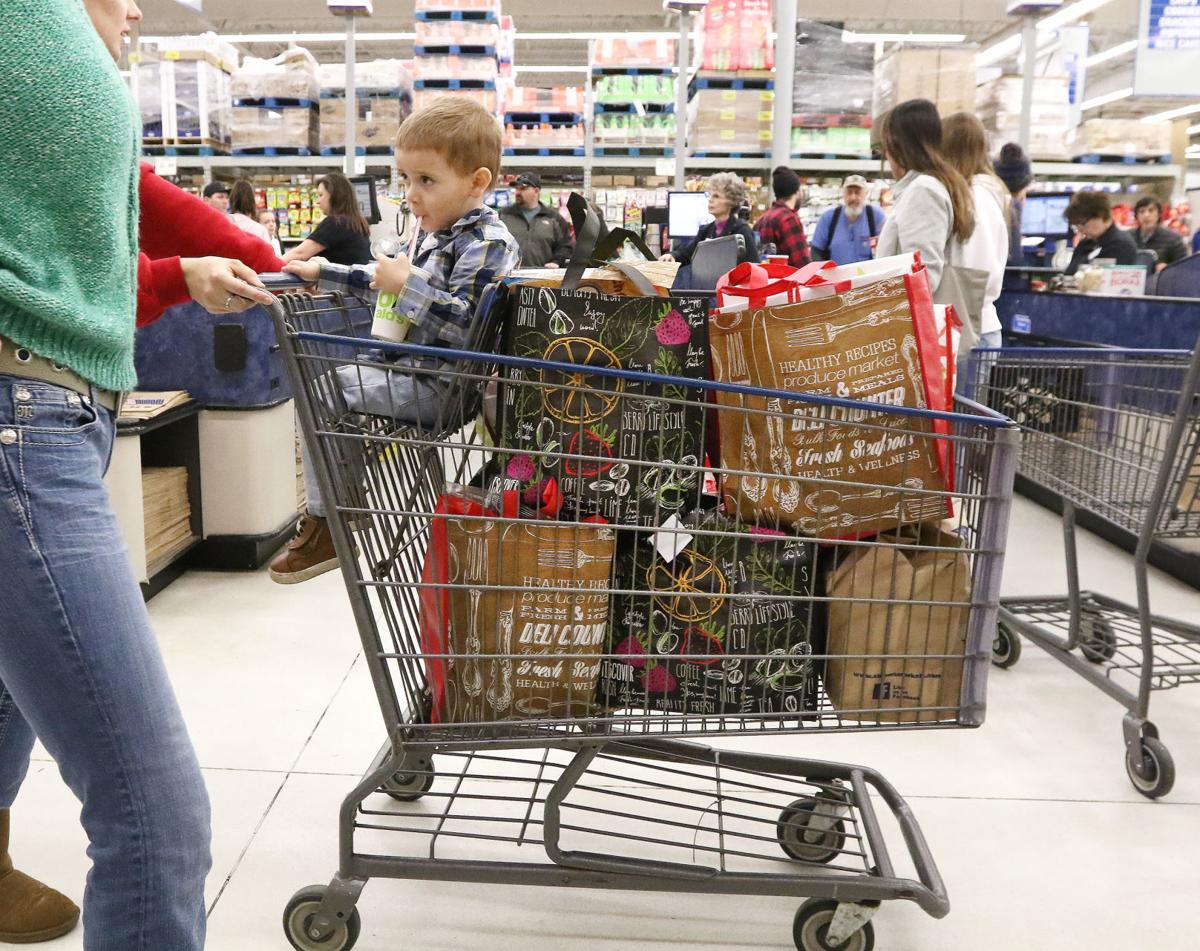 Hezekiah Shelton, 3, of Roseburg rides along with a cart full of re-usable bags while shopping Tuesday at Sherm’s Thunderbird Market in Roseburg with his mother Erika Shelton and grandmother Sharon Shelton. 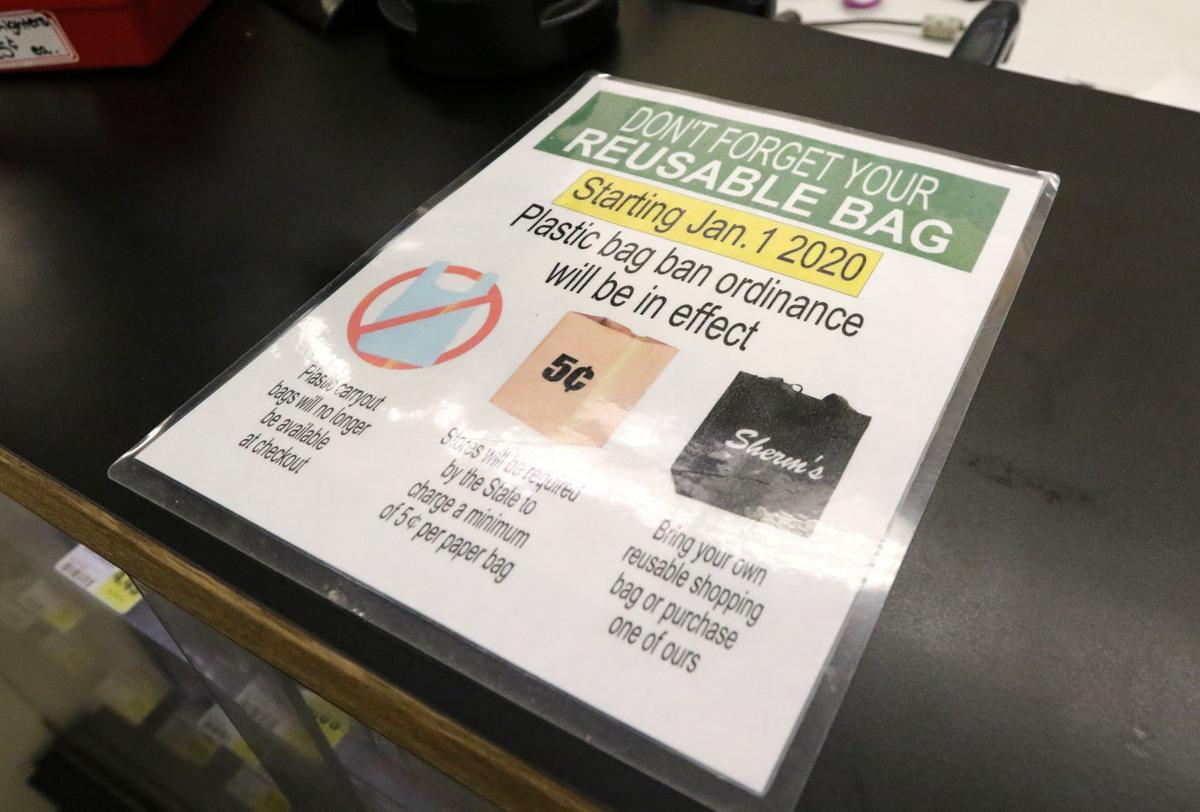 A sign posted at Sherm’s Thunderbird Market in Roseburg on Tuesday reminds shoppers of a statewide plastic bag ban ordinance going into effect in 2020.

George Sheppard of Roseburg chose paper bags for his groceries while shopping at Sherm’s Thunderbird Market in Roseburg on Tuesday.

Hezekiah Shelton, 3, of Roseburg rides along with a cart full of re-usable bags while shopping Tuesday at Sherm’s Thunderbird Market in Roseburg with his mother Erika Shelton and grandmother Sharon Shelton.

A sign posted at Sherm’s Thunderbird Market in Roseburg on Tuesday reminds shoppers of a statewide plastic bag ban ordinance going into effect in 2020.

Many shoppers at Sherm’s Thunderbird Market Tuesday said they were happy to collect their groceries in reusable or paper bags on the eve of a new law banning plastic checkout bags.

The plastic bag ban is one of a host of new laws taking effect today, on the first day of 2020. Sherm’s planned ahead, running out of plastic bags about two weeks before the law took effect and not reordering, said Sherm’s Thunderbird Market General Manager Bob Ames.

Grocery stores and other retail establishments can no longer provide single-use checkout bags to customers. They can offer recycled paper bags and reusable bags made of either cloth or plastic, but they have to charge at least five cents for them. Stores breaking the law can be fined $250 per violation.

George Leveque, of Roseburg, said the new law won’t be a change for him since he’s been using reusable bags for years.

“I leave mine in the car and I find them easier to use because you can carry them easier, easier than paper or plastic. You can put more in a bag,” he said.

He’s glad to get rid of plastic bags.

“You see ’em everywhere, on the coast or out in the woods, every place,” he said.

Amber Wenzl, of Roseburg, said she thinks it’s about time to make the conversion. She brought four of her own bags and wound up using a paper bag to fit the rest of her groceries.

Wenzl said she often brings her reusable bags but then forgets them in her car. She thinks the new paper bag charge will help her remember to bring the bags into the store.

She thinks the new law is worth the trouble.

“We actually just got back from the beach and it was really sad to see almost everywhere you looked there was a piece of plastic, some plastic bags, just little fine particles that most people aren’t going to pick up and that’s just getting worse and worse. It’s a big problem,” she said.

Moriah Carnes, of Days Creek, doesn’t own any reusable bags, so she was filling up her cart with paper bags. She said she was pleasantly surprised when she came into the store last week and found no plastic bags at the checkout.

“I have a huge amount of them in my house, so I can’t imagine how it looks at the dump, you know,” she said.

Not everyone was thrilled by the change, though. One woman declined an interview saying she had nothing nice to say about it.

George Sheppard, of Roseburg, wasn’t happy about it either. He had a cart full of groceries in the paper bags that will cost him 5 cents a pop in 2020, the charge being another mandate under the new law.

“I see it as one more thing to add to the cost, the everyday cost for Oregonians to live,” Sheppard said.

He noted gas prices are going up too, and the state’s also going to charge more to register fuel-efficient vehicles because it’s not getting as much in gas taxes from those cars. He’s not sure yet whether he’ll keep paying for paper bags or shell out the money for reusable bags.

“I don’t know, I’ve thought about maybe I’ll just bring me a big black trash bag and just load up all my stuff in that,” he said.

Ames, the Sherm’s manager, said he has mixed feelings about the new law. He’s glad it will help the environment, but the store also will lose some money if customers use the paper bags. While plastic bags cost the store just 2.2 cents apiece, paper bags are four times that and the law only allows for a nickel charge to customers for the paper bags.

Ames said they are selling a lot of reusable bags, though, which could be good for everyone. So far, he said, most customers seem supportive of the change.

“We just want to provide the best service we can to our customers and we’re encouraged that it’s leading people to reuse their own stuff. In the long run, it will save all of us money and keep our land a little more clean,” Ames said.

Pregnant and nursing women will have additional protections from employer discrimination. HB 2341 requires employers to provide reasonable accommodations for these women and forbids retaliation against them for seeking such accommodations. The state Bureau of Labor and Industries lists examples such as modifying equipment, offering longer breaks or periodic rest, assistance with manual labor and modification of work schedules. Accommodations do not have to be made that the employer proves would create an undue hardship for the business, either in difficulty or expense.

When I hear big shot Hollywood celebrities telling me to "give a hoot don't pollute" while they travel by private jet and own mansions with thousands of acres of lawns and such which have to be maintained by power equipment and fertilized by chemicals...I think to myself just how small my carbon footprint and pollution scale is in comparison. If YOU don't want to use plastic bags thinking you're saving the world good for you. But don't tell the rest of us what products to make use of.

A majority of people in this town could benefit from the extra trips it will now take them to walk from their car/house to unload their groceries. Worst case scenario the fire dept/paramedics won't have to worry about being out of a job with all the people that might start passing out in the garage/driveways from having to walk more than 10 feet in one day. The laziness the majority of the population here shows that I see at my job everyday is is ridiculous!

And... the middle class pays for it all. Thanks Governor Brown and Legislature.

Does bringing your own bags into a store or having to use paper bags take you so far out of you comfort zone? What a whiner! This doesn't cost the middle class squat!!

smedleyb is right (as was his namesake). Keep some bags in your vehicle, and carry them in. Of course, this takes the tiniest bit of advance planning, and awareness of the needs of others, and consideration of future generations. Clearly, it's too much for some to bear.