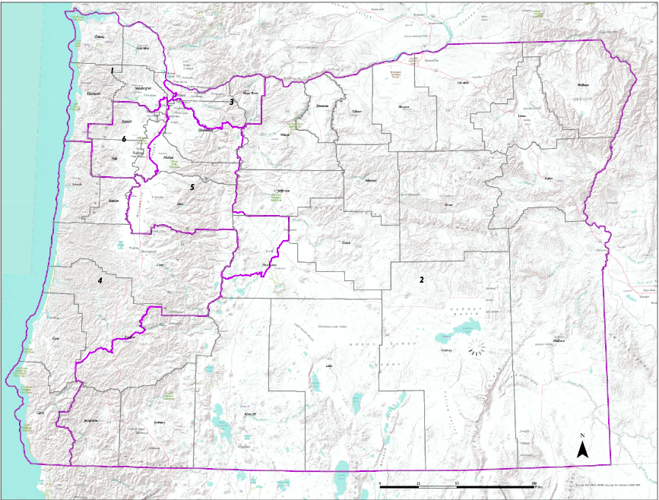 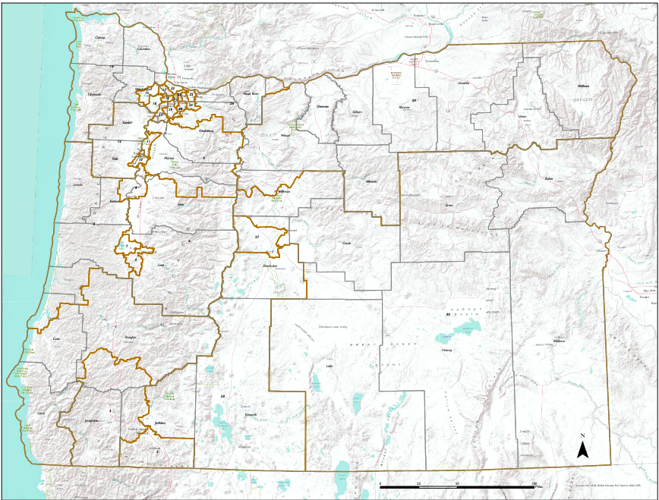 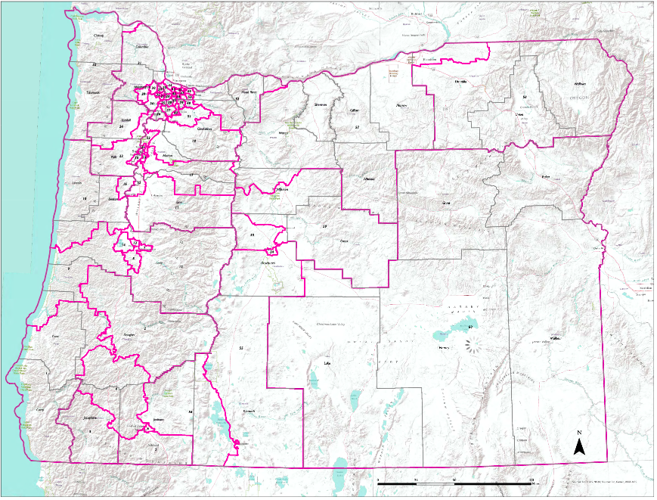 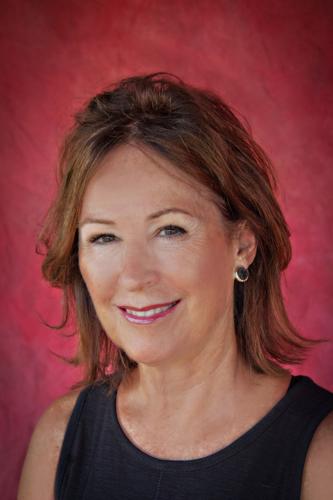 Douglas County will be split between two congressional districts, a move that will alter the landscape for the 2022 elections.

The shift in the political map was approved by the state Legislature and signed into law by the governor Monday.

The new map draws a jagged line diagonally across the county. Roseburg and North County would remain in the predominately Democratic U.S. House District 4. But South County is lumped in with District 2, a sprawling solidly Republican district that spreads across the eastern half of the state.

State legislative districts were redrawn as well, resulting in some districts shifting northwards. Some county residents, for example, will now find themselves in Republican state Sen. Art Robinson’s district. Others now served by Lane County legislators are likely to find their legislators in Douglas County next year instead.

Every Oregonian is served by two state legislators — a representative in the state House, and a senator in the state Senate.

And then there’s the federal races to consider. After the 2022 election, there will be six Oregon representatives in the U.S. House, up from five previously.

The boundaries of all three types of districts were shifted across the state on Monday by the state Legislature.

The state constitution gives the Legislature the task of redrawing those districts every 10 years based on U.S. Census data.

The redrawing of districts is a contentious process, and the parties in the majority are often accused of gerrymandering, or attempting to redraw the maps in ways that benefit their own side of the political aisle. That’s been played out in Oregon this year, with Republican legislators accusing the majority Democrats of doing exactly that.

Here’s a look at where the new districts fall in Douglas County:

The New Congressional DistrictsThe Congressional Districts drew the most controversy during the redistricting process, and the changes to the districts were particularly striking in Douglas County. Currently, all county residents are served by U.S. House District 4 and represented by Springfield Democrat Peter Defazio.

Under the newly approved maps, Douglas County will be split along a diagonal line. Roseburg and North and West County, including the communities of Winston, Sutherlin, Glide, Oakland, Yoncalla, Elkton and Reedsport will continue to be served by District 4, which may now be more solidly a blue district.

But residents of South County, including Myrtle Creek, Riddle, Canyonville and Glendale, will join the safe Republican District 2. That district already includes the Eastern half of the state and part of Jackson County. It will expand to include all of Jackson and add Josephine County as well. District 2 is currently served by Ontario Republican Cliff Bentz.

New State House DistrictsThere are 60 state House districts in the Oregon Legislature, and Douglas County has long been split into several. Those boundaries will change, too, when the new districts take effect.

But Winston will be shifted into District 1, which includes the South Coast and is currently served by Port Orford Republican Rep. David Brock Smith.

The southernmost part of the county, including Canyonville, Riddle and Tiller will be moved into state House District 4 along with rural parts of Josephine and Jackson Counties. District 4 is currently served by Grants Pass Republican Duane Stark.

Most Douglas County residents will be in state Senate District 1, currently served by Myrtle Creek Republican Dallas Heard. That district is made up of House Districts 1 and 2, and will now include North County residents that have been served by Eugene Democrat Floyd Prozanski.

ControversyDemocrats and Republicans put forward very different proposals, but the final result was little changed from the Democratic version.

“We listened to Oregonians and passed new maps that are fair and accurate,” said Democratic Senate President Peter Courtney in a press release Monday. “It was a bumpy road from start to finish but I think history will show we did a good job.”

But Goodwin told The News-Review Tuesday that the new U.S. House district maps will create a blatantly unfair 5 to 1 split, with five Democrats and one Republican in a state that she said only leans liberal.

She said Portland shouldn’t have been lumped in with rural and coastal districts to the West, and Multnomah County should have been split into two districts, not three.

She also objected to Bend’s placement in the same district as parts of the Willamette Valley.

Republican legislators walked out at one point over the weekend, threatening to block the process by denying the quorum necessary to take a vote.

That move followed House Speaker Tina Kotek’s sudden announcement last week that she was backing out of a commitment to give Republicans an equal say in redistricting in order to push through the Democratic version of the new maps. She at that time replaced the committee which had been evenly split between Democrats and Republicans and had worked on redistricting for months.

“Legislators are unlikely to confess a partisan motive, but their motives are revealed when they disband the agreed upon nonpartisan committee, then create a new partisan committee, and deny negotiation with the minority party. All with the motive to support outcomes they know will not reflect Oregon voters on whole,” Goodwin said.

“I believe fair play and honest treatment is a fundamental obligation of leadership,” she said.

The maps were ultimately approved on a party line vote, with the Republicans registering their objections by collectively voting “no.”

If the Legislature had failed to pass new maps, the state legislative maps would have been redrawn by a Democrat, Secretary of State Shemia Fagan. A panel of five judges would have drawn the congressional districts.

Goodwin said top Democrats like Fagan, Kotek and Courtney insisted on maps benefiting their party, and Brown would have vetoed any plan she didn’t want.

Republicans on the House Redistricting Committee last week asserted that the process was so flawed that districts should be drawn by an independent commission rather than the Legislature.

Republicans are not alone in calling for an independent commission.

People Not Politicians, a group that made an unsuccessful bid in 2020 to put such a commission on the ballot, said the same on Tuesday.

“The promise of fair representation should not be a pawn in a partisan political game,” said Chairperson Norman Turrill in a press release. “We need to reform this process to create a fair system so that Oregon voters are choosing their politicians, instead of politicians choosing their voters.”

The group, which has the backing of the League of Women Voters of Oregon and the Independent Party of Oregon, among others, said it is already gathering signatures in an attempt to make it onto the November 2022 ballot.

Christine Goodwin, “I believe fair play and honest treatment is a fundamental obligation of leadership." About lost my lunch with this statement coming from her mouth, as the most recent hand puppet of the local Republican Party ascending to a higher office. Her knowledge of redistricting is about as deep as a dime is thick. She's the gold standard example of it's about "who you know," not "what you know," when it comes to holding office in Douglas County. Between Goodwin and Heard, Douglas County's influence is beyond laughable. And, these new districts sideline us even more. That's what happens when you send idiocy to Salem and if Douglas County is nothing else, it is consistent in that regard.

Every Oregonian being served by a representative in the house and senate is the most hilarious thing I've heard this week. Elected officials are only there to serve their donors and whatever lobbyists give them the most and best perks.

Regarding complaints about gerrymandering. Republicans love to gerrymander when it benefits them but scream bloody murder when the Dems play hardball too.

Most of Melrose is in state HD 1.

I am really bummed. Now I live in a R+26 CD2, and in Art Robinson's senate district. My only consolation is that Peter DeFazio's CD4 got a tiny bit bluer.

So sorry, specially about Robinson. On the plus side, I bet Alek Skarlatos is having a sad.

Yep. Always so sorry about the perpetual right-winger candidate Robinson. Well, maybe Skarlotos can actually buy a house of his own, move, and be in a non-vax red arena.

Yeah Joe we too will be in the district with the insane Art Robinson. We go from one jerk to another.

Nobody. This government does not represent the people any more than I represent the entire species of humming birds. Their kids do not go to the same schools, they do not eat at the same restaurants, they are not in the same tax bracket as you an I, they do not care at all. Doubt it? Write them a letter and see what sort of automated response you get.

Check your email for details.

Submitting this form below will send a message to your email with a link to change your password.

An email message containing instructions on how to reset your password has been sent to the e-mail address listed on your account.

Your purchase was successful, and you are now logged in.

A receipt was sent to your email.