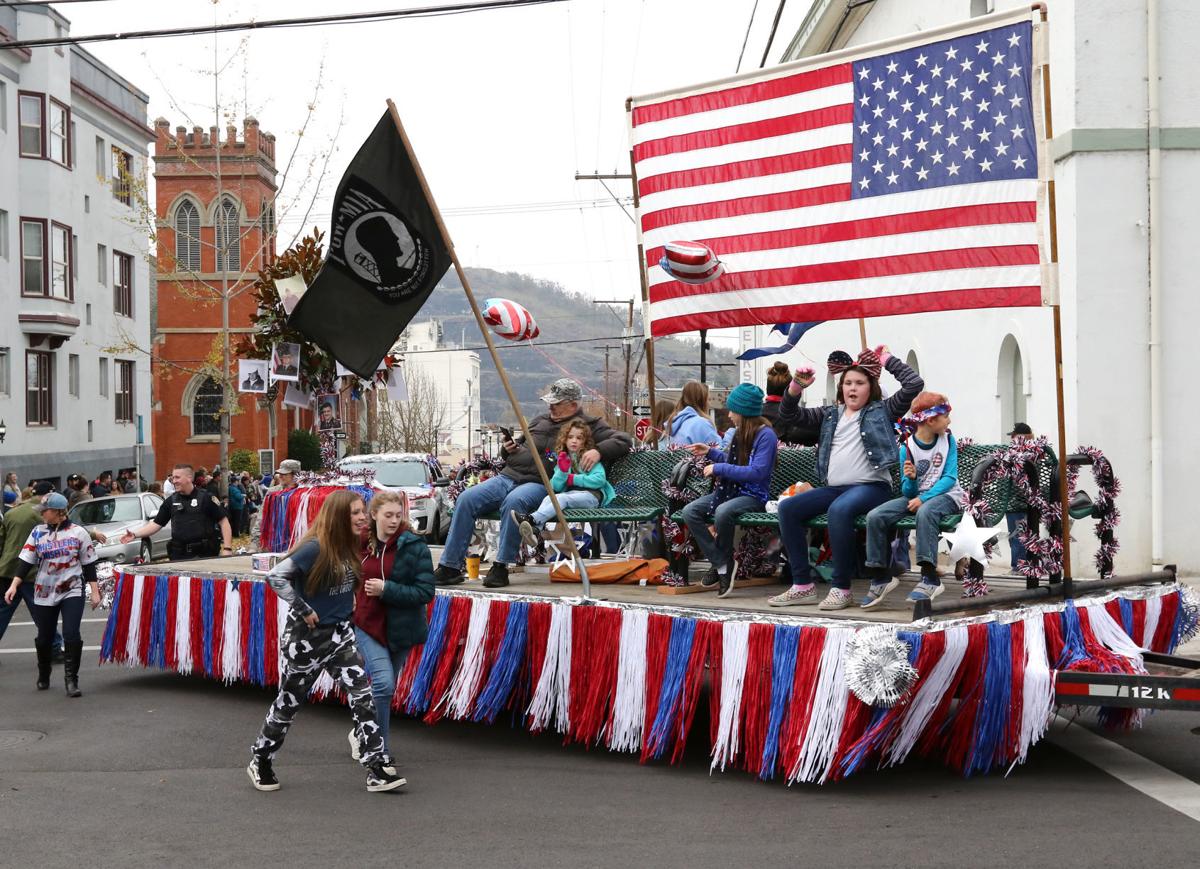 A Veterans Day Parade float makes its way through downtown Roseburg on Monday. 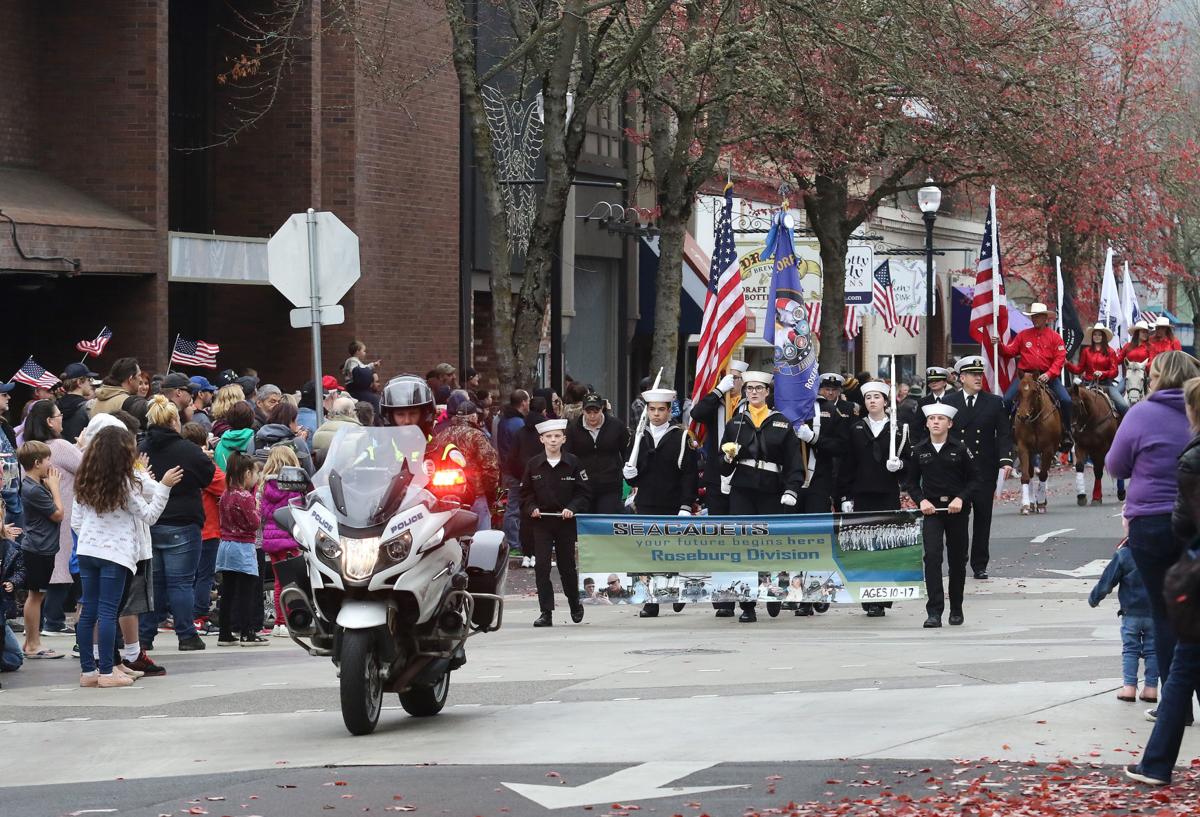 The Veterans Day Parade makes its way through downtown Roseburg on Monday. 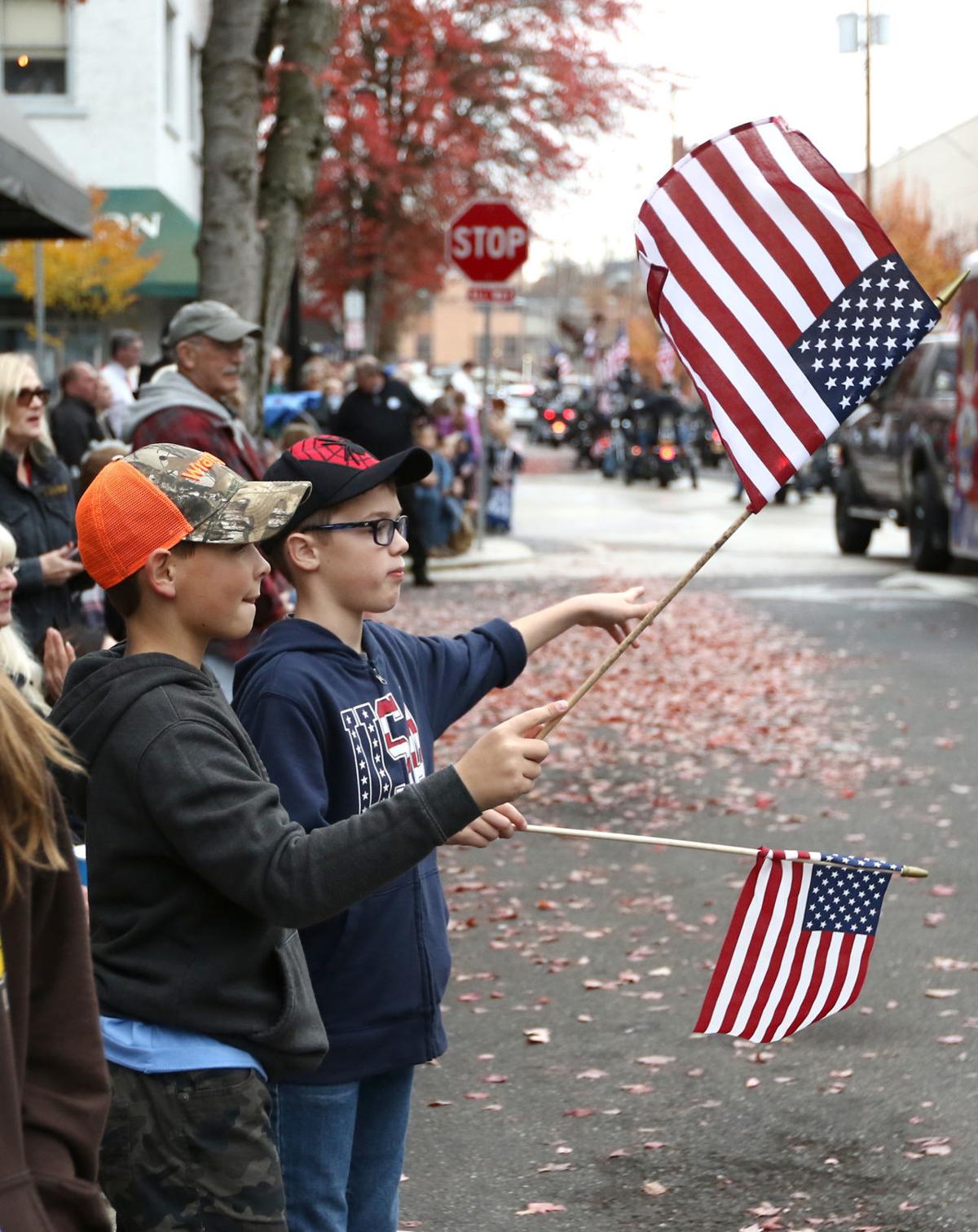 Kellen Garrett, left, and friend Timothy Kitchens, both 11 of Roseburg, wave flags as they take in the Veterans Day Parade on Monday in downtown Roseburg. 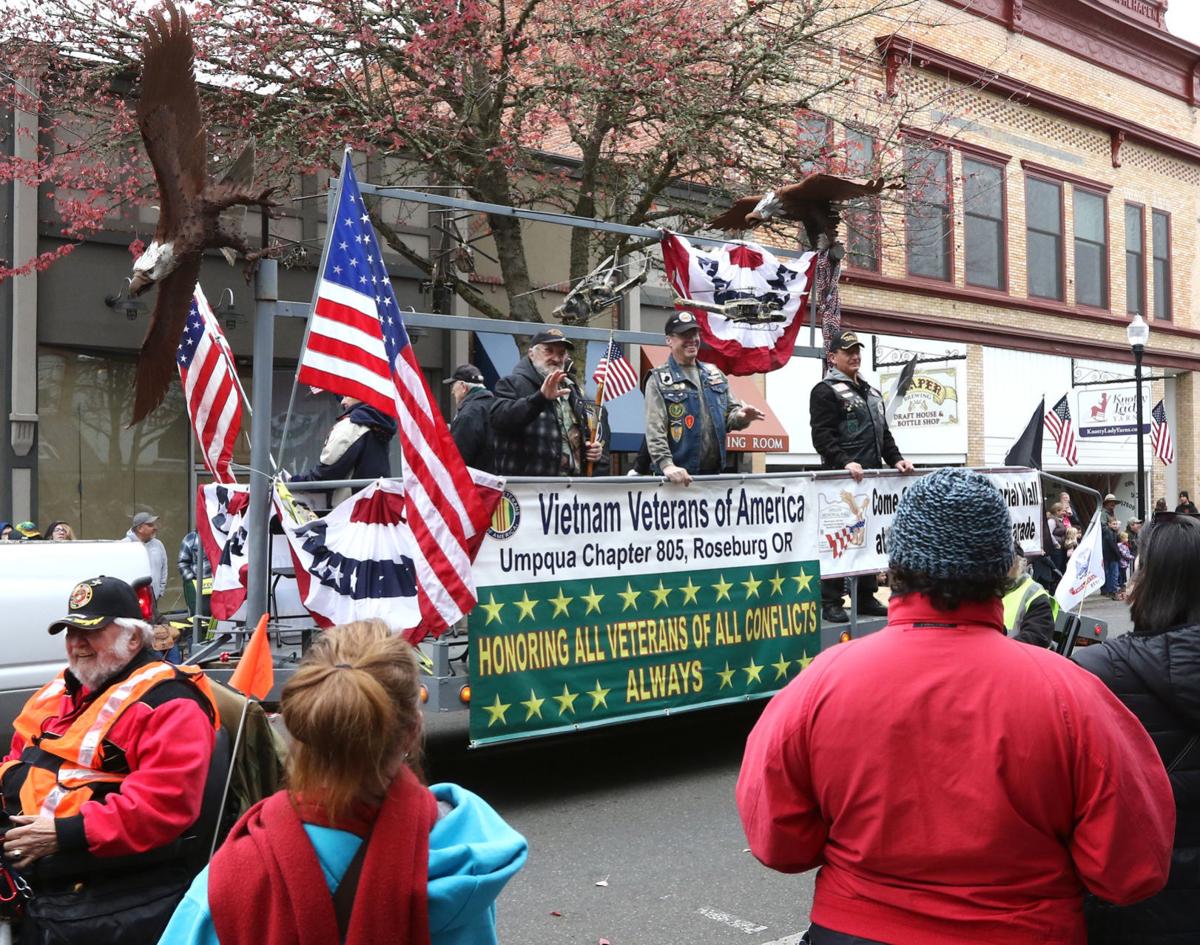 Members of Vietnam Veterans of America Umpqua Chapter 805 wave as they pass through downtown Roseburg during the Veterans Day Parade on Monday. The chapter won the Douglas County Veterans Service Office Trophy. 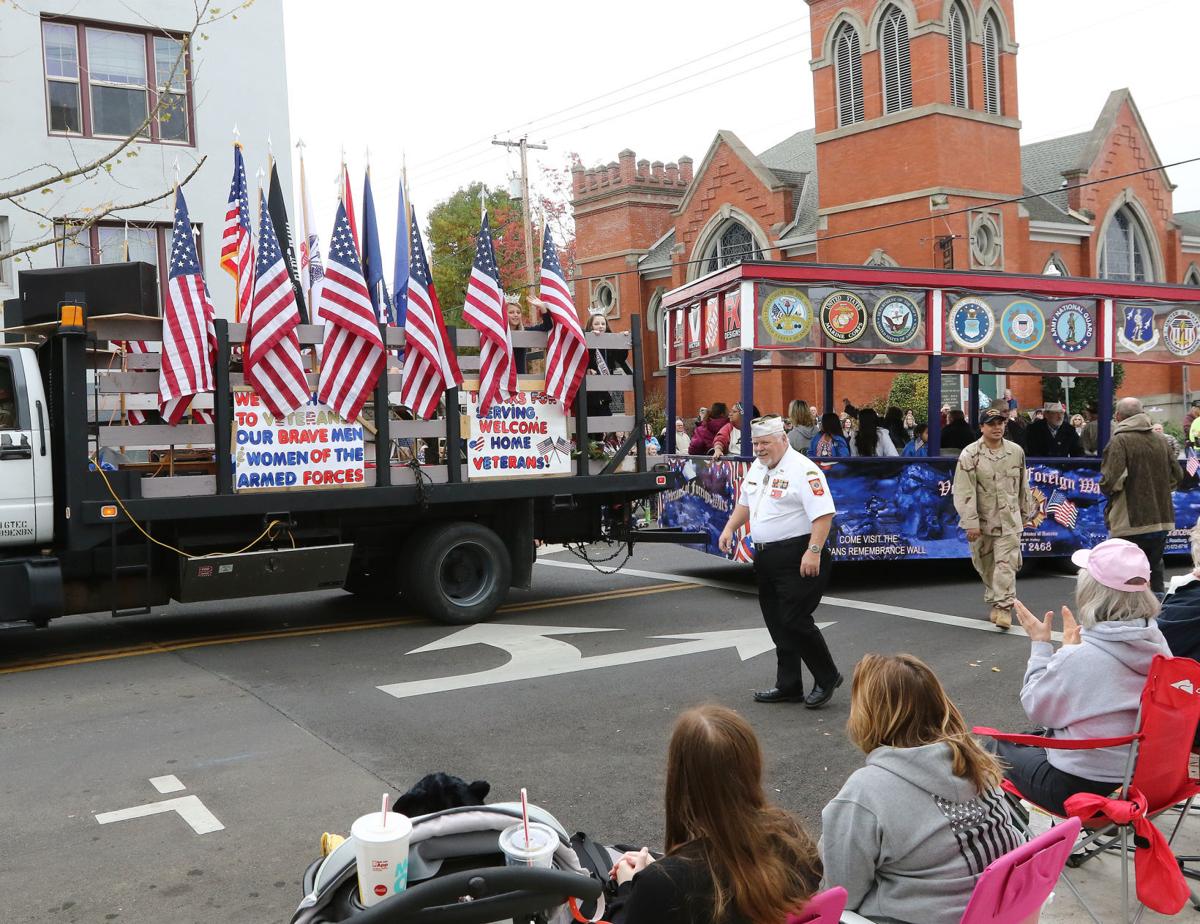 A Veterans Day Parade float makes its way through downtown Roseburg on Monday.

The Veterans Day Parade makes its way through downtown Roseburg on Monday.

Kellen Garrett, left, and friend Timothy Kitchens, both 11 of Roseburg, wave flags as they take in the Veterans Day Parade on Monday in downtown Roseburg.

Members of Vietnam Veterans of America Umpqua Chapter 805 wave as they pass through downtown Roseburg during the Veterans Day Parade on Monday. The chapter won the Douglas County Veterans Service Office Trophy.

Thousands of Douglas County residents streamed in from all directions Tuesday morning to line Southeast Jackson Street in Roseburg.

And there was a flyover by F-15 Eagle fighter jets from the 173rd Fighter Wing out of Kingsley Field in Klamath Falls, which could be heard but not seen due to the cloudy weather.

Many of the spectators were veterans themselves, and some wore caps indicating where and when they served. Some people marching in the parade took time to walk over and shake their hands, thanking them for their service.

World War II veteran Dudley Kurtz, 93, of Lebanon and younger members of the Kurtz family rode as grand marshals of the parade. With Dudley Kurtz were his nephew Dale Kurtz of Riddle, who served in Vietnam, and great-nephew Michael Kurtz of Roseburg, who served in Operation Desert Storm.

This year’s parade theme was “Celebrating Generations of Military Families.”

Dudley Kurtz was one of five brothers who served in World War II. His mother was pretty anxious about having all her sons in the war, he said.

“My dad kept telling her maybe all of us wouldn’t come back, but we all did,” he said.

He loved the atmosphere at the parade.

“There’s just beautiful, beautiful floats around here and the bands. I’m a musician, so I love hearing the bands too,” he said.

He played trombone in his high school and college marching bands and would love to have played in a Navy band. But the opportunity never arrived.

“I would have stayed for 25 years playing ‘Anchors Away,’” he said.

He said it’s overwhelming to think that this is the 100th anniversary of Veterans Day, which started one year after the day the Allies and the Germans signed an armistice agreement at the end of World War I.

“I’m so glad that there’s so many people here and so many veterans here to celebrate it on this occasion. It only comes around every 100 years,” he said.

Sophia Horne, 10, marched with her Girl Scout troop and said while her legs hurt and she wasn’t keen on walking for an hour, she was happy so many people were out to honor people like her father, who is a veteran.

“We didn’t use to see him a lot because he was always somewhere else,” she said.

Sea Cadet Emma Newby was proud to wear a uniform and march at the front of the parade, even though it felt a bit awkward. She wanted to honor service members who had fallen as well as those that are still here and came out to watch the parade.

“I feel like they feel a sense of pride when they see all of us,” she said.

Navy veteran John Law rode on a float with fellow submarine veterans. Law served on three types of submarines between 1954 and 1967 — a World War II diesel submarine, a missile boat and a nuclear submarine.

He recently moved to Douglas County and said the turnout for the parade was wonderful. People here really support veterans, he said.

“That’s one of the things we like about the community,” he said. “We came up from Paradise, California, after the fire, so this has been a real treat to be here in Roseburg.”

“What’s amazing is a lot of the people we get to see and have contact with when we come. It’s the only time of year we get to see them and that’s very special,” he said.

Vietnam Veterans of America Umpqua Valley Chapter 805 President Frank Escalante said there were four generations of service in his family, from his father to his grandson, who just returned from Afghanistan two years ago.

Escalante was an Army medevac crew chief. When he returned home from Vietnam, soldiers were being cussed at and spit on, he said. He quickly stopped identifying as a veteran and put the war behind him. After retirement, though, he struggled with post-traumatic stress syndrome and found spending time with other veterans helped.

Douglas County is very supportive of veterans, he said, and that’s helped too.

“I don’t know what made it click and turn around, but all of a sudden everybody’s thanking me for what I did,” he said.

Diane Shoop of Winston, one of the spectators at the parade, said she felt emotional watching the veterans go by.

“We have our freedom because of these men and women,” she said.

Reflections on the library’s past year
Wendy Kang to step down as executive director at Saving Grace after 11 years
© Copyright 2020 nrtoday.com, 345 NE Winchester St. Roseburg, OR | Terms of Use | Privacy Policy
Powered by BLOX Content Management System from TownNews.com.