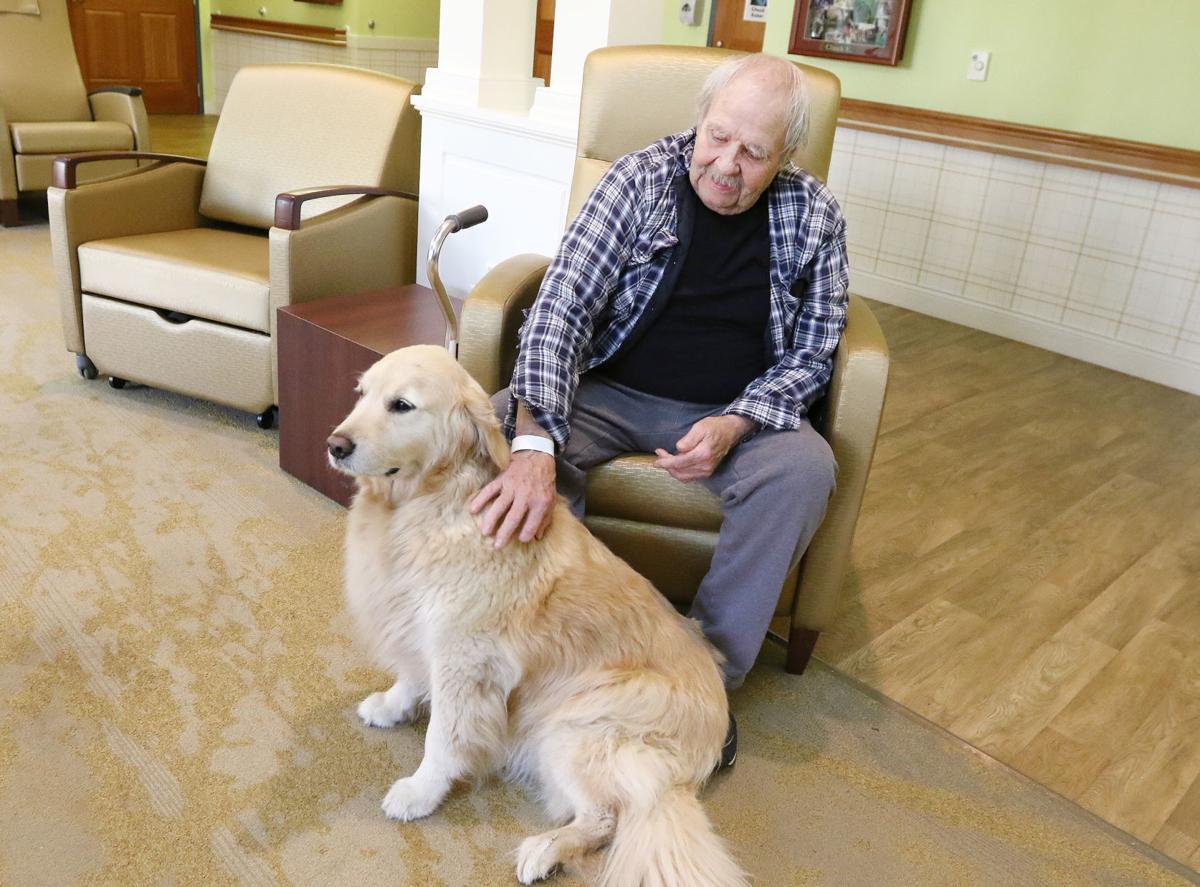 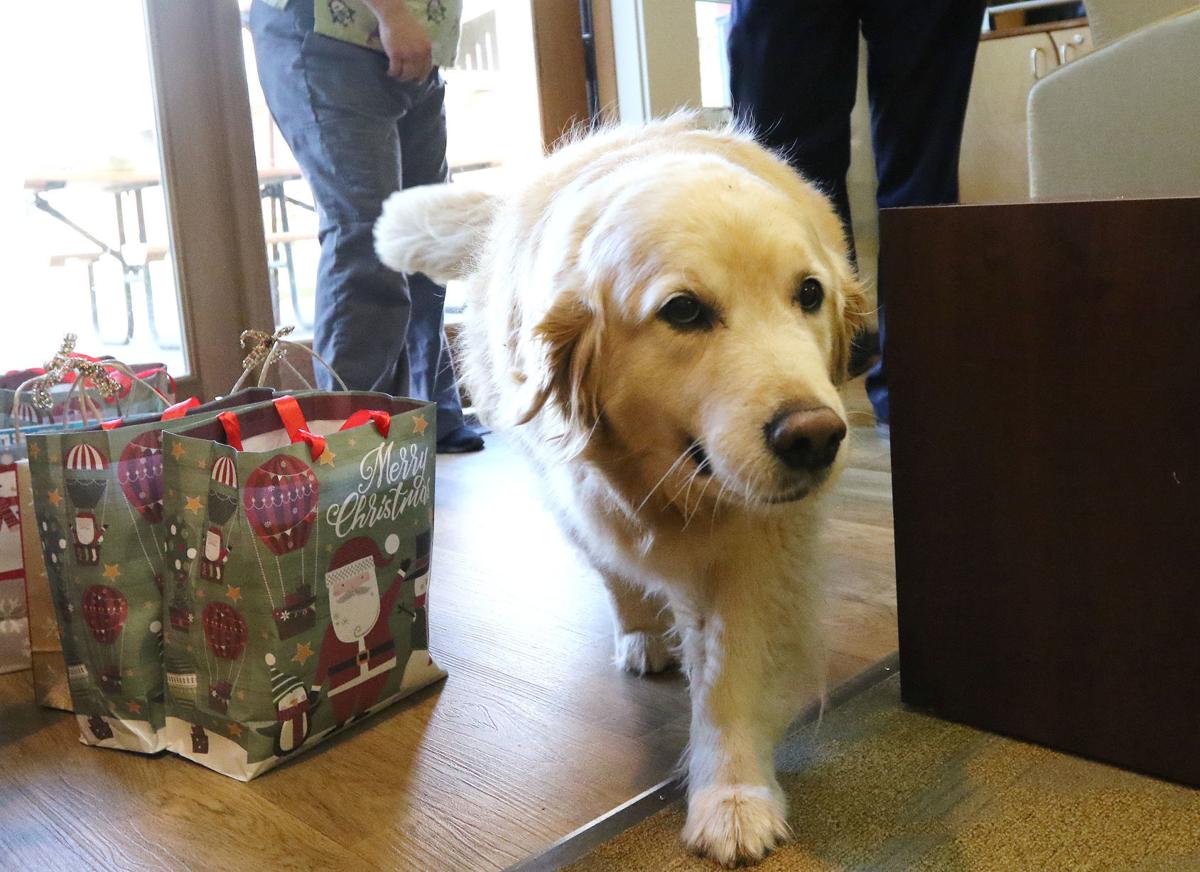 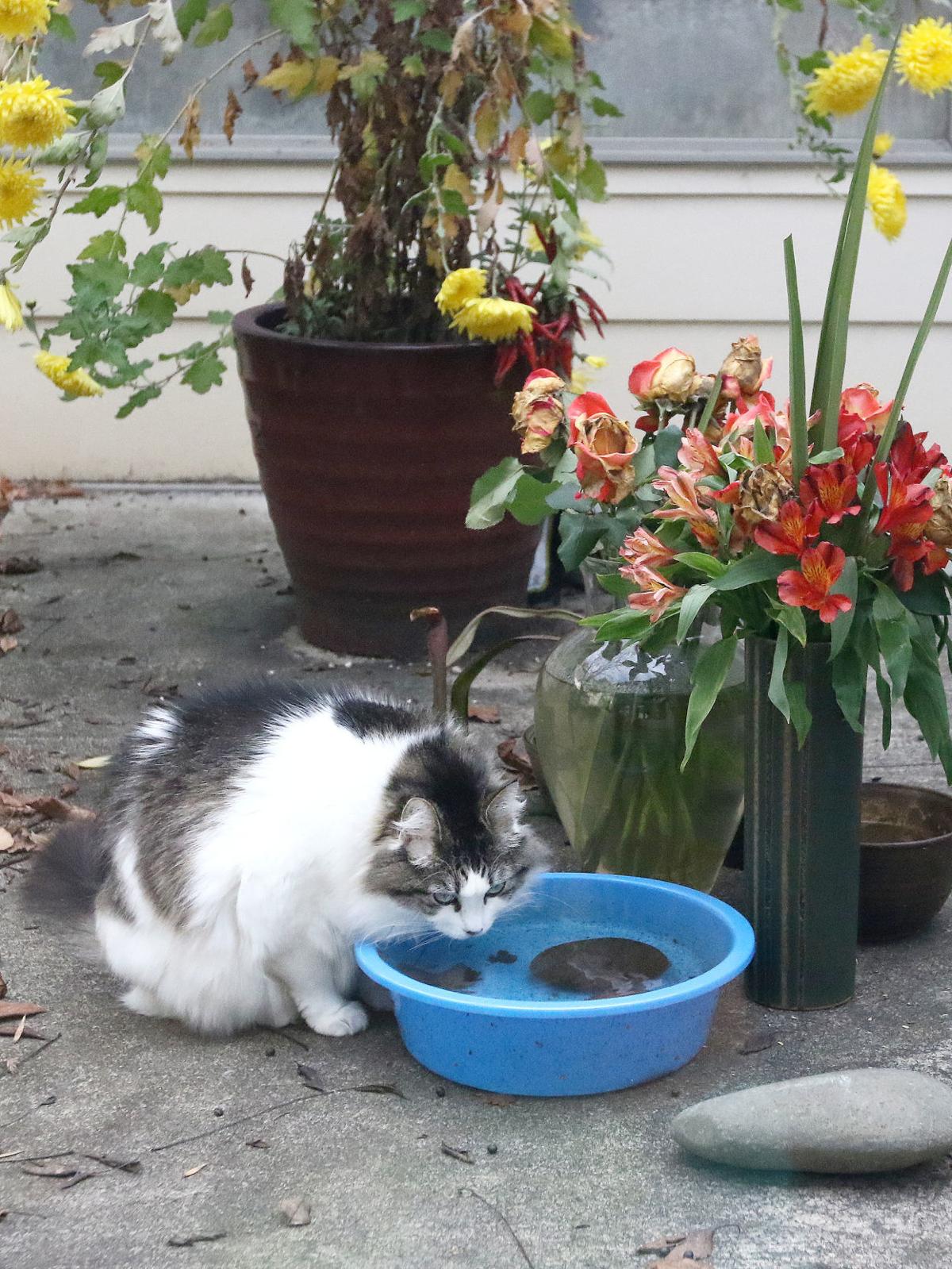 Therapy cat Charlotte takes a drink of water in an enclosed outdoor courtyard at the Roseburg Veterans Affairs Medical Center on Friday. 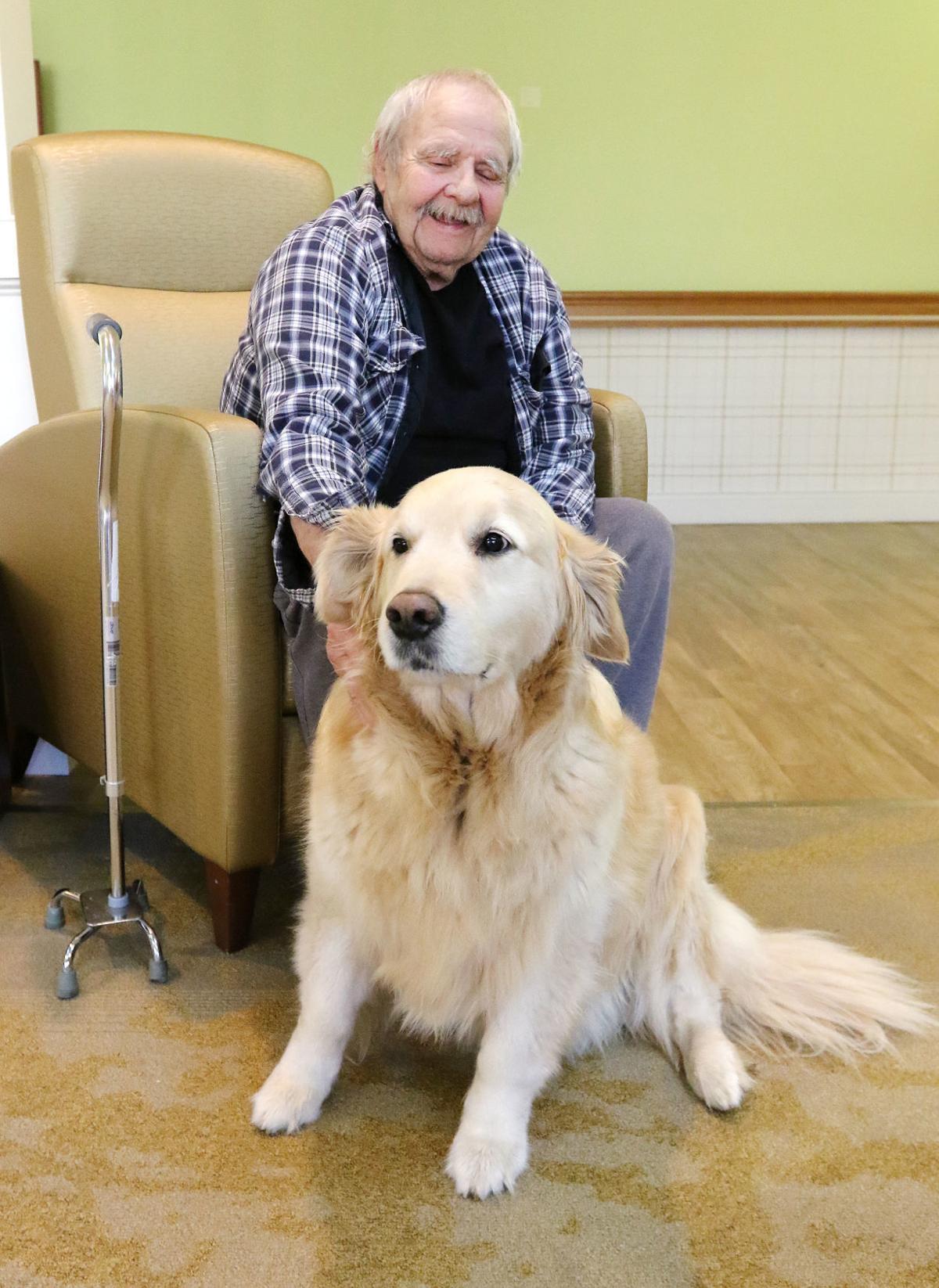 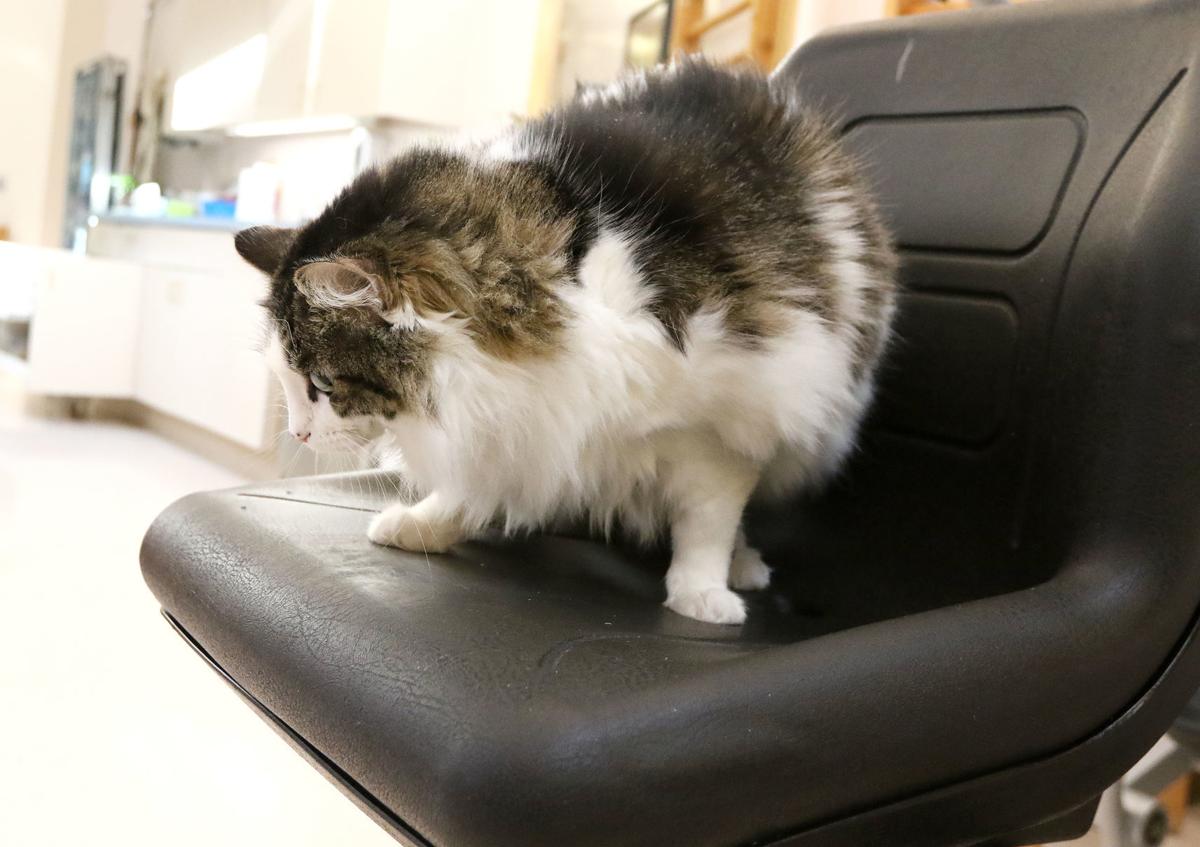 Therapy cat Charlotte prepares to leap from a chair on Friday at the Roseburg Veterans Affairs Medical Center. 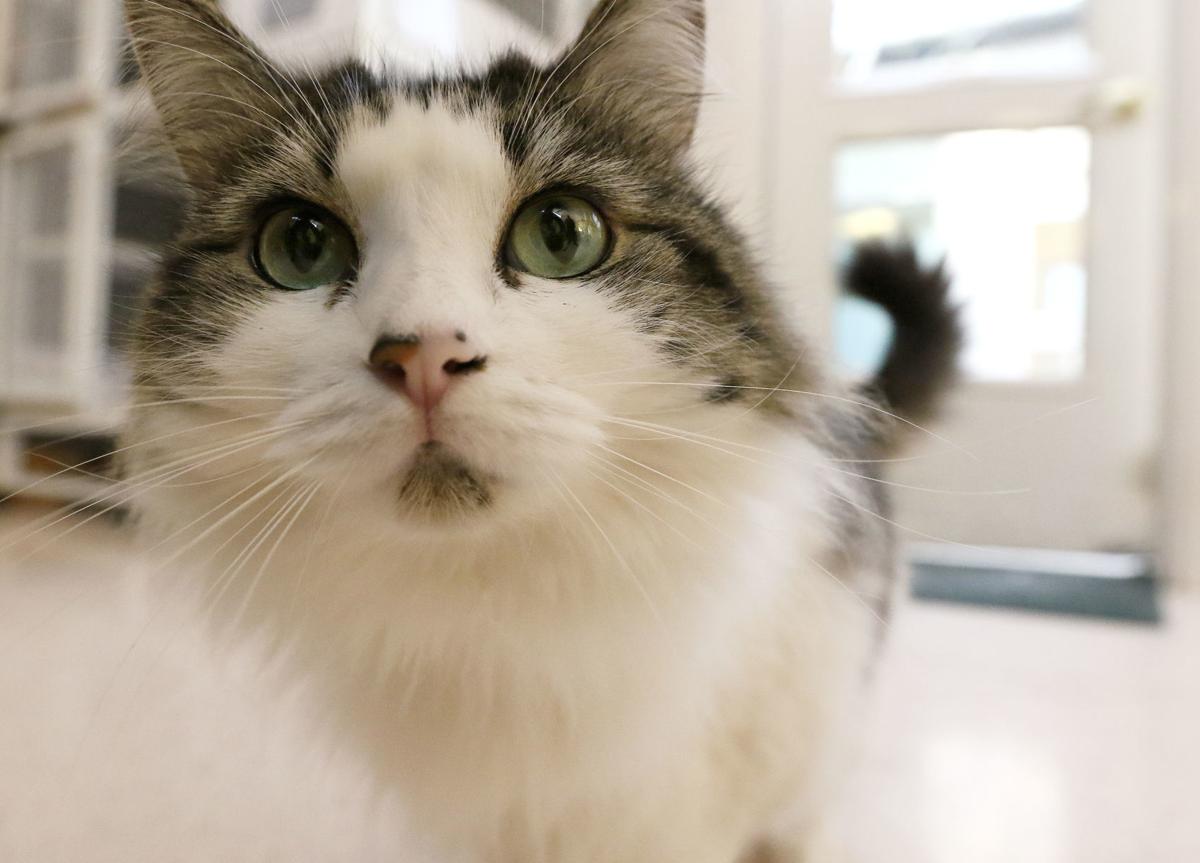 Therapy cat Charlotte takes a drink of water in an enclosed outdoor courtyard at the Roseburg Veterans Affairs Medical Center on Friday.

Therapy cat Charlotte prepares to leap from a chair on Friday at the Roseburg Veterans Affairs Medical Center.

Nursing home patients at the Roseburg Veterans Affairs Medical Center get by with a little help from their four-footed friends.

Golden retriever Lola has lived at The Lodge memory care facility for the past 10 years.

Fluffy gray and white haired Charlotte is the most recent in a long line of cats who has lived at the River House skilled nursing unit. She’s been there four years.

Community Living Center Nurse Manager Nick LaFata demonstrated Lola’s ability and eagerness to perform basic tricks for cheese — sitting, rolling over and holding her paw out for a shake.

He said the pets help the patients feel more at home.

“When you have a pet on the unit it decreases anxiety,” LaFata said. “It makes them remember when they were young and they had pets of their own.”

Charlotte attends staff meetings, visits patients in physical therapy rooms, watches birds outside the windows and jumps up and cuddles with veterans in their rooms.

“Unfortunately we have some stuck in bed and so it’s kind of their only contact with something outside of their bedroom, and she gets to be loving and entertaining to each of them,” said River House physical therapist Colleen Beaton. “She just wins the hearts of so many people, and what we hope to provide is like a homelike healing environment, and it seems very effective.”

Beaton said Charlotte even seems to have an uncanny ability to sense when hospice patients are on the edge of death.

She recalled one gentleman came wheeling out of his room one day with Charlotte on his lap, saying “See, somebody loves me.”

“He passed the next day,” she said.

The Lodge resident Jimmy Willis, a retired nurse and U.S. Marine Corps veteran, said Lola is a good therapy dog and lets anyone pet her. Willis has never seen Lola get aggressive.

“I’ve seen people step on her feet and she doesn’t bite or anything, so she’s very well behaved. She gets along good with people that, would you say, are a little bit diminished capacity.”

Willis had many dogs as pets before moving to The Lodge. He can no longer remember exactly when that was, but he knows he had hunting dogs, hounds and retrievers and also Dobermans and Rottweilers.

“I’m an animal lover so I’d rather see animals than people,” Willis said.

When people say animals are dumb, he doesn’t believe them.

“Surprisingly enough they’re very intelligent and I’ve always been an animal type person,” he said. “I think animals are great.”

J.B. Fullerton is a U.S. Air Force veteran and retired veterinarian who moved to River House about a year and a half ago, after his wife of 38 years Georgia Fullerton died in a fire. Bedridden with multiple sclerosis, she was unable to escape. Fullerton said he still struggles with post-traumatic stress disorder from that incident and sometimes wakes in a panic in the middle of the night.

He said he’s glad Charlotte is there for him and the other veterans. She provides great company and entertainment as well as good therapy, he said.

“She started hunting me down in my room down there. I give her little cat treats once in awhile,” Fullerton said.

She’s a sucker for Temptations brand snacks, he said.

Before moving to River House, Fullerton always had cats and dogs around. He had to leave his Dachshund Bruno with a friend after moving to the VA.

River House physical therapist Netta Leong said Charlotte was donated by Saving Grace Pet Adoption Center. Before that, they had a cat named Oliver for 13 years. Leong had to cut through some red tape after Oliver died in order to get a replacement.

“I had to literally create a paper trail. It included committees, memorandums, you name it. It was pretty thick. We literally had a Project Oliver going on to see if we could get another cat here,” she said.

But she knew from experience the effort was worth it. A pet can make a real difference in the quality of life for the nursing home patients, said Leong, who’s been at the VA for 27 years.

“In a health care setting there’s an awful lot of angst about one’s own situation and it is really apparent how people can forget their problems when they can at least see something more normal like an animal, a dog or a cat,” she said.

All the cost of the animals’ food, medical bills and other expenses are financed through donations. To donate, call the Voluntary Services office at 541-440-1000, ext. 45311 or ext. 44350. The VA can only accept cash or check donations for the program, not donated pet food.

Four years ago, I went numb from the waist down. After quite a few MRI’s, spinal tap, I was diagonsed with Multiple Sclerosis. I was on Avenox for almost 2 years, i had 1 year of monthly steroids IV, had to stop due to hip pain. Through my physiotherapist i learnt about a MULTIPLE SCLEROSIS HERBAL TREATMENT from R.H.G. (Rich Herbal Gardens) and their success rate with the treatment, i immediately started on the MS treatment, i experienced decline in major symptoms including hand tremor, back pain, difficulty walking, muscle paralysis and weakness, uncomfortable tingling and burning, fatigue, urinary retention,double vision, slurred speech difficulty swallowing, numbness. Visit ww w. richherbalgardens.c om. I knew that a positive attitude is everything and to just believe, I’m in control of my life again….