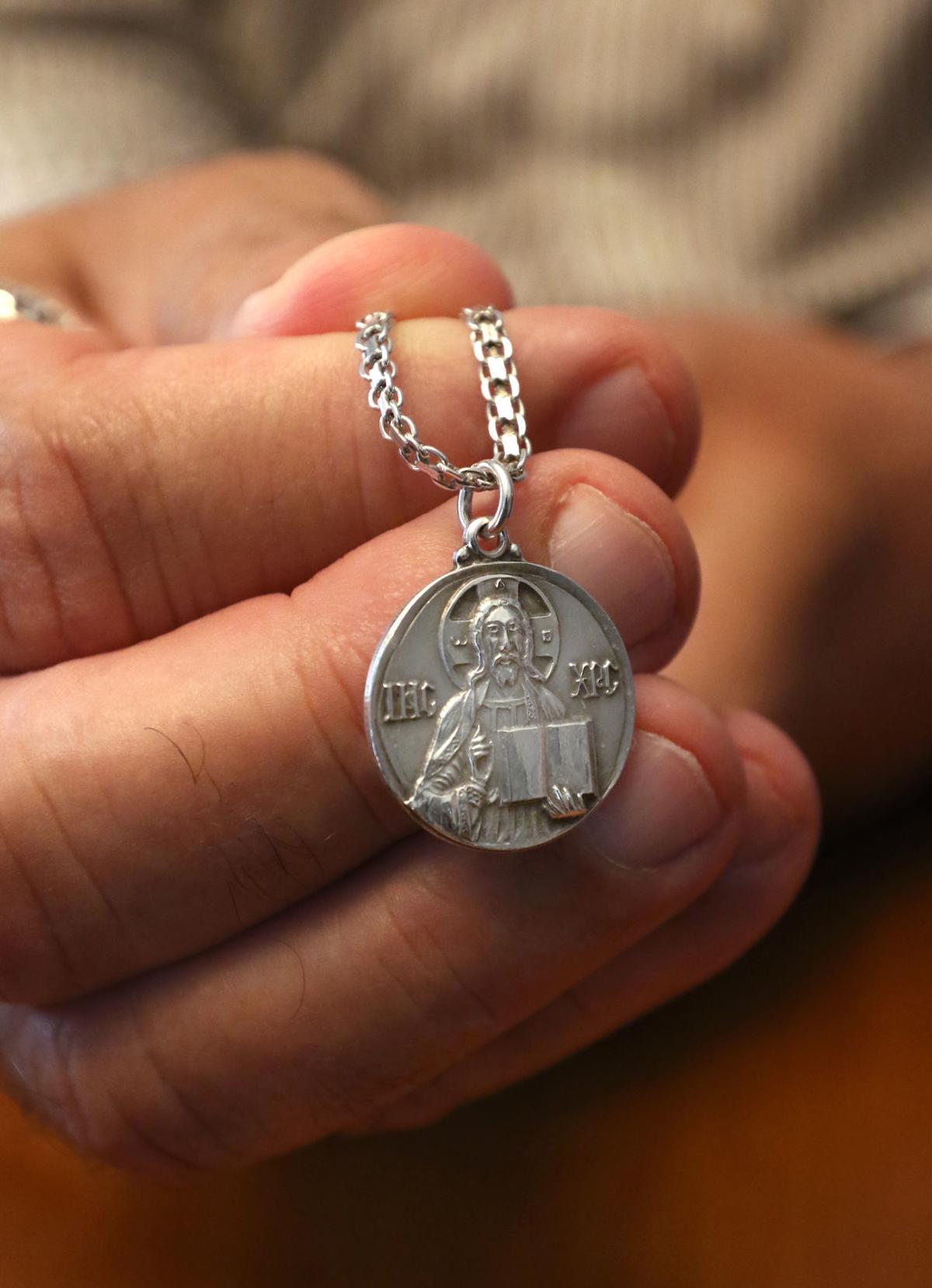 Army veteran John Trotogott holds the Orthodox medal he received from his mother at his Roseburg home. The medal was given to replace the Orthodox cross Trotgott lost when he served in Vietnam.

Army veteran John Trotogott holds the Orthodox medal he received from his mother at his Roseburg home. The medal was given to replace the Orthodox cross Trotgott lost when he served in Vietnam.

In March 1946, about a month after my birth, a priest baptized me by immersion in water at the Holy Resurrection Orthodox Church in Warren, Ohio. During the ceremony, he placed a silver chain with the three-bar Eastern Orthodox cross — also known as a St. Andrew’s cross — provided by my parents, around my neck.

Though many traditions explain its symbolism, I was taught the third bar of the St. Andrew’s cross shows the balance between the good thief, St. Dismas, and the bad thief, Gesmas, who died with Jesus Christ. Its left side slants upward, indicating St. Dismas ascended into Heaven after he obtained his salvation with God. The right end tilts downward and symbolizes God thrust Gesmas into Hell after he cursed Him. According to my studies, this bar indicates where Jesus’ feet were affixed.

Because the cross was blessed, I felt safer wearing it. Whenever I experienced fear, worry, or aloneness, I touched it to remind me of who I am and of the One above me.

In September 1965, I was drafted into the U.S. Army. Three months later I headed to basic training. Afterwards, I completed advanced schooling in Virginia before serving in Germany. In April of 1967, I volunteered for duty in Vietnam, where I became a medic. As always, I wore my cross every day.

Less than one year later, when time allowed, I left base camp in Vietnam and traveled to the Military Assistance Advisory Group’s compound. This group assisted in the training of conventional armed forces and facilitated military aid. Mr. White, a U.S. Agency for International Development worker, supervised a refugee hospital there and frequently ran out of medical supplies. In order to help, I hustled whatever he needed from my company, the area hospital, and various dispensaries.

In addition, the refugee hospital needed maintenance. The windows lacked screens, and not enough beds were available. Richard, another medic, and a few other fellow soldiers helped me locate the needed concrete blocks, lumber and other building supplies. Sometimes, we stole materials from the Air Force base or bribed someone.

When we drove up with our trucks loaded with all of his needs and wants, Mr. White’s eyes filled with tears of gratitude. With our ill-gotten materials, we remodeled the decaying building.

One day, after hours working on the hospital, we were returning to base camp when the radio sounded an alert for all soldiers to vacate the roadways and return to their bases. While our jeep was going full speed in the Tuy Hoa area, we observed Viet Cong rockets and mortars being launched on a small village.

The incursion ceased when we were opposite the village. Wounded civilians were lying on the ground. For a second, we thought we should get home but decided to pull over and help.

I jumped out of the jeep and went to aid a 12-year-old Vietnamese girl, who sustained shoulder and chest injuries from shrapnel. Leaning over to clean and suture her wounds, my cross hung down from my neck. She reached up and began playing with it. Suddenly, she broke the chain and held it in a death grip.

Her father, who was standing next to her, asked me if I was a Catholic bacsi mop, which means “Catholic big doctor” in English. I guess he saw the cross and thought I was Catholic.

I attempted to explain. “No, I am Eastern Orthodox.”

The Buddhist man probably did not understand what I was saying, though I repeated myself a couple of times. The girl’s family just stared at me.

After wrapping the young girl’s wounds, I asked God to heal and protect her. I then turned her over to the Vietnamese medics, who carried her away. I wanted my cross, still tightly gripped in her hand, but what could I do? There was no way I could ask for it back.

She was relocated to another area and I never saw her again. However, a few weeks later I heard from one of our Vietnamese workers that she was doing well. He said the family wanted to thank me.

In 2001, Metropolitan Kirill, the Patriarch of the Russian Orthodox Church, and his team visited Vietnam on a fact-finding mission and met with a Russian-speaking community. A year later they created a parish in Vung Tau called Our Lady of Kazan, bringing their Eastern Orthodox crosses with them.

After I lost my cross, my mother replaced it with a round sterling silver Orthodox medal on a silver chain, belonging to our family for decades. The front of the medal shows a depiction of an early sixth century painting which illustrates Christ Pantokrator, right hand raised in blessing, his left holding the New Testament. A cruciform halo surrounds the head; Greek letters on either side spell out his name. The etching on the back proclaims “I am an Orthodox Christian.”

Though I value the medal, at times I think about my St. Andrew’s cross and the wounded 12-year-old Vietnamese girl who pulled it from my neck. I wonder if she still owns it. If so, does she feel safer? Does it remind her of who she is? Or did someone sell it for the silver?

I prefer to believe the former. God knows for sure.