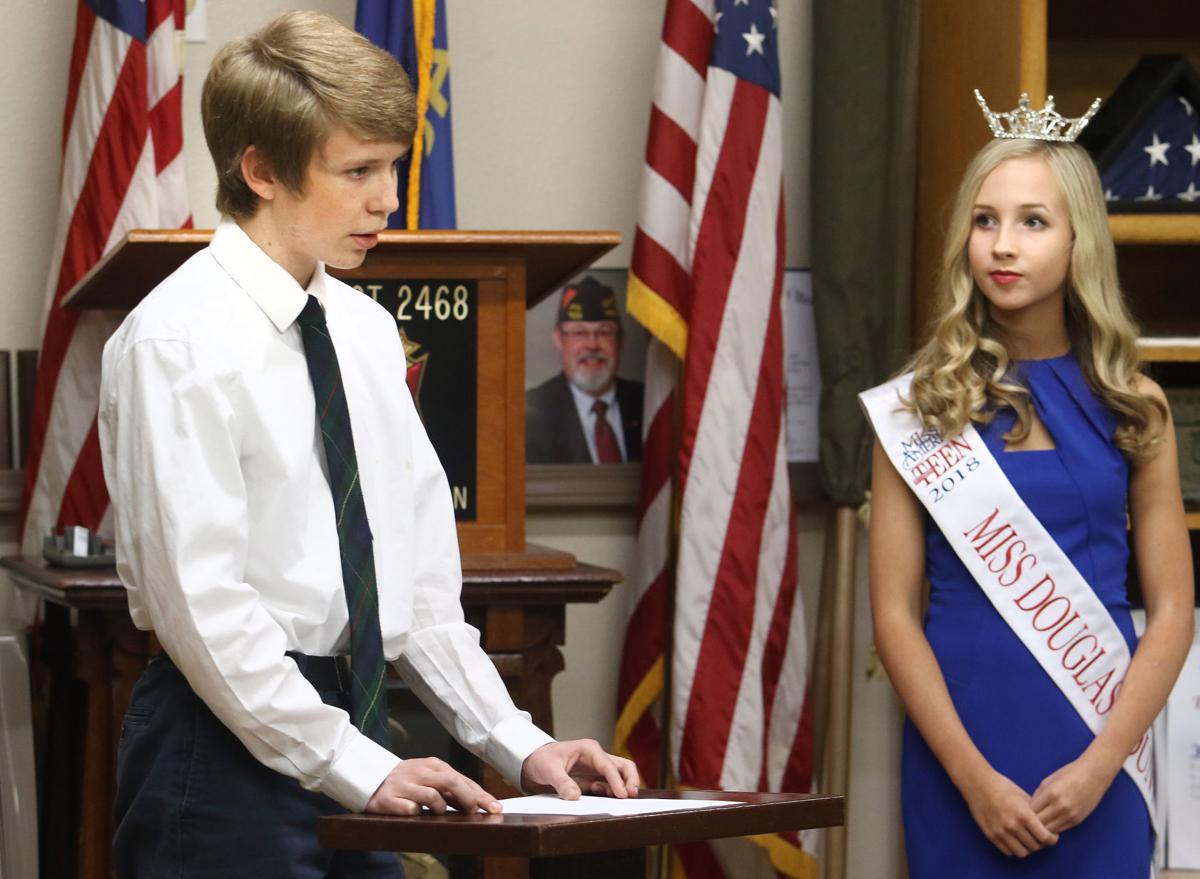 Marin Gray looks on as Benjamin Paschall reads the essay he wrote expressing his gratitude for those who have served in the military during an event at Veterans of Foreign Wars Post 2468 in Roseburg on Thursday. 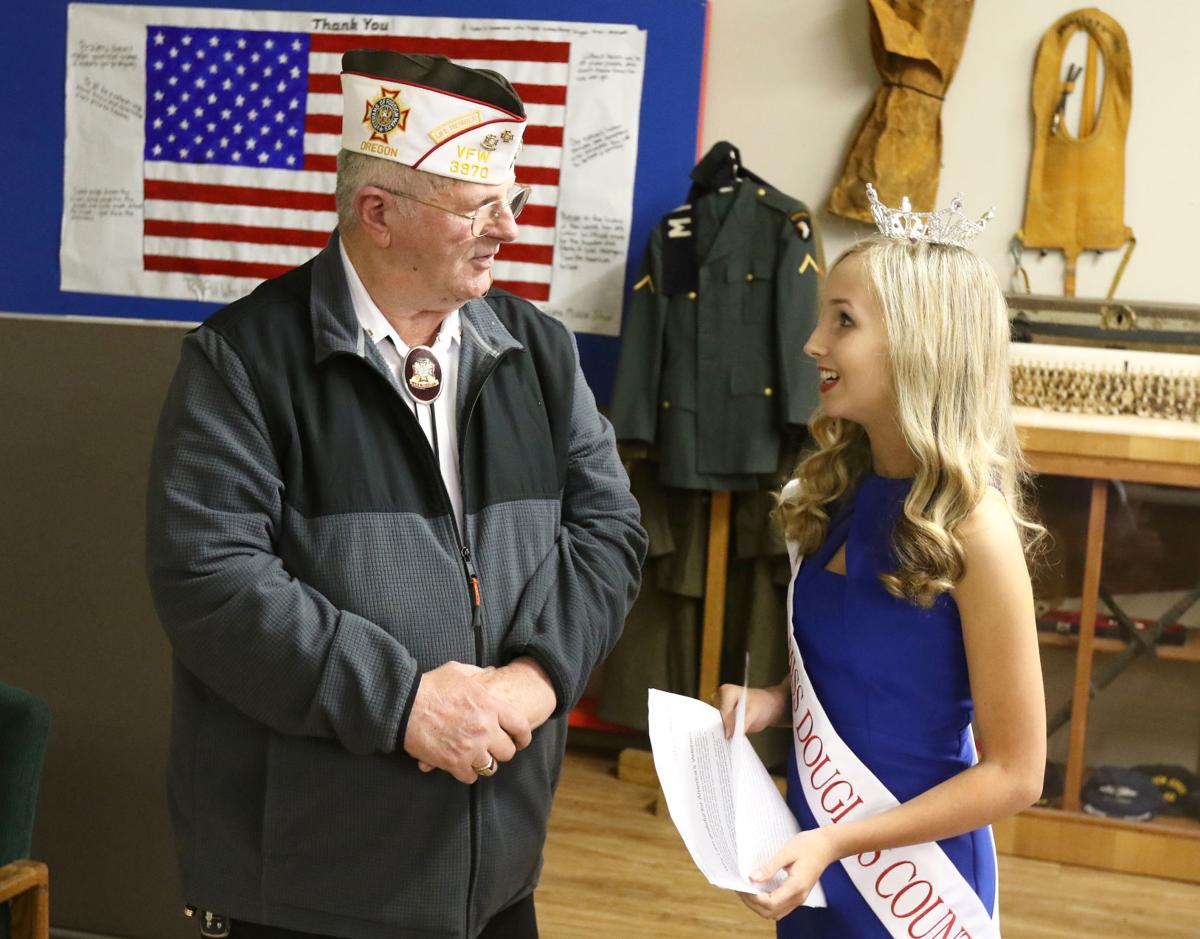 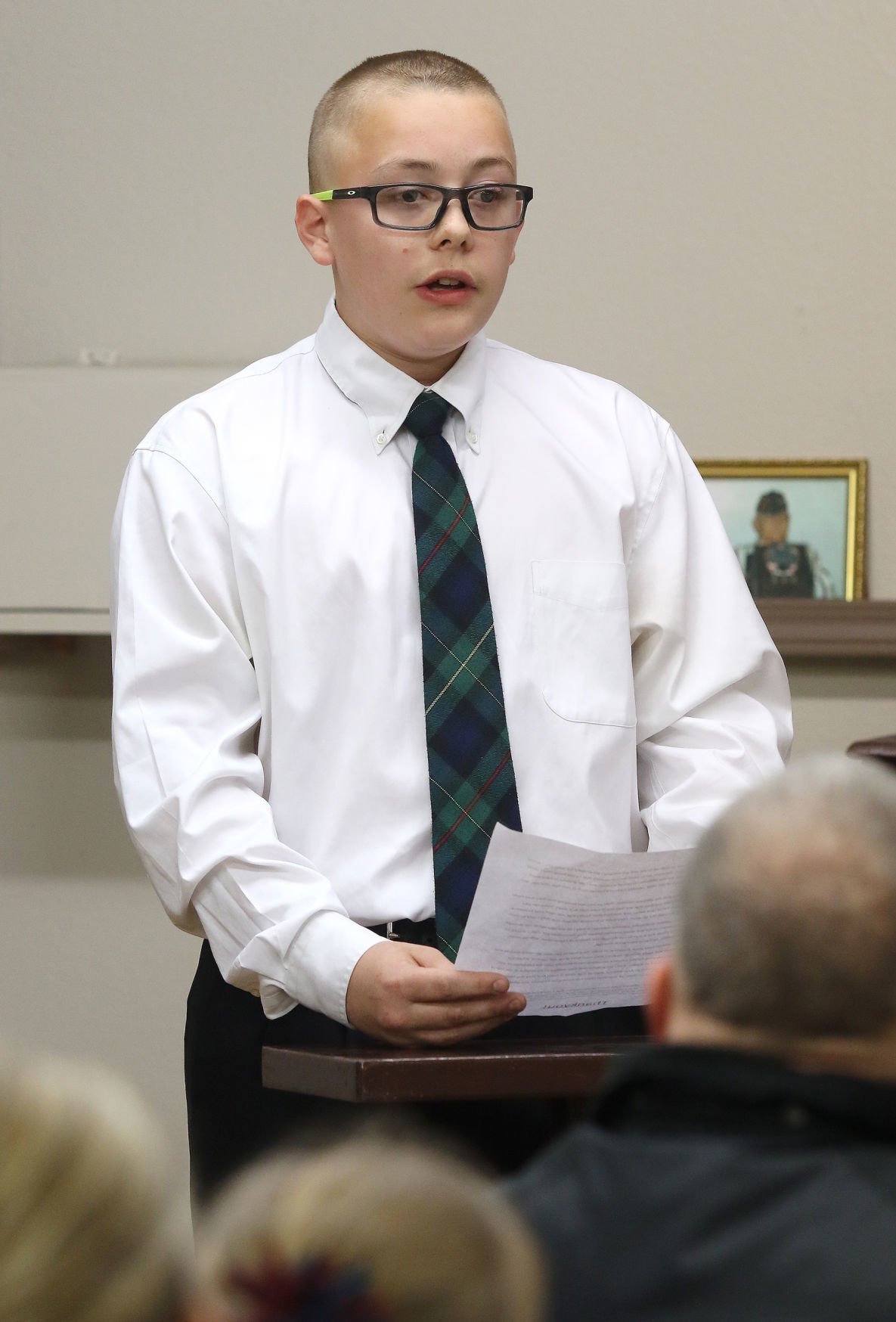 Allen Boice, 14, reads the essay he wrote expressing his gratitude for those who have served.

Marin Gray looks on as Benjamin Paschall reads the essay he wrote expressing his gratitude for those who have served in the military during an event at Veterans of Foreign Wars Post 2468 in Roseburg on Thursday.

Allen Boice, 14, reads the essay he wrote expressing his gratitude for those who have served.

Some veterans didn’t get the welcome home they hoped for as they returned from the jungles of Vietnam or the deserts of Iraq, but a group of local middle school students did their best to help make up for that Thursday at the Veterans of Foreign Wars Patrick W. Kelley Post 2468 on Walnut Street in Roseburg.

As a group of veterans listened, the students read the essays they wrote as part of the BRAVE Heroes Essay Contest.

The contest was created by Marin Gray, 13, of JoLane Middle School. Marin had won a $1,000 prize at the state level of the VFW Patriot’s Pen contest, and said she wanted to give something back to veterans.

Twenty-six essays were submitted and judged ahead of time with the assistance of Roseburg High School Principal Jill Weber and veteran and Roseburg Real Estate agent Neil Hummel. The writers of the top five essays were invited to read them Thursday.

Jonathon said it felt good to win, but his focus remained on the veterans even after the contest was over.

Reading his essay, Jonathon asked where we would be without the willingness soldiers had to lose their lives. From the Revolutionary War to Afghanistan he said, they “have protected us from many dangers that might have befallen us.”

“Because of them we are unscathed and living in peace. Those that have completed their service deserve respect from all of us,” Jonathon said.

Marin also read her Patriot’s Pen essay, called “America’s Gift to My Generation.” She said our nation’s greatest heirloom is the gift of influence, and that influence was purchased with blood and sacrifice, but also by fighting for the right things and upholding our ideals.

That began with the Revolutionary War, she said.

“Unpaid and unfed, this nation’s first soldiers fought because they believed that the choir of ‘We the People’ held more power to influence our destiny than the voice of a king,” she said.

Chaplain Bill Johnson spoke about the importance of young people talking to veterans. He cited the example of a fellow World War II veteran who wasn’t able to speak about his experiences until he attended a Living History Day at Roseburg High School and school children asked him questions about his experience. It was one step on the road to recovery, Johnson said.

“I want to thank all the kids, the young people, for just knowing what some of these guys have gone through,” he said.

Joe Wouters, who attended Friday’s event, said he thought it was great.

“When I came back from Vietnam, I didn’t get anything. I got spit on. These kids are at least welcoming us home,” he said.

Marin said she had attended kindergarten and first grade at the Geneva Academy, so she recognized many of the winners. She was happy with the event.“I feel it came out pretty well,” she said.

The essay competition was the latest in a string of events coordinated by Marin. She organized a Kindle giveaway to Eastwood Elementary School students in December, to increase access to books in the wake of the library’s closure. Kindle devices allow students to download and read an array of books.

Last year, Marin organized a BRAVE (Building Respect and Value for Everyone) World program, in which presenters from 16 nations spoke to hundreds of local sixth-graders. The program is meant to help stop bullying by building understanding between people who are different from each other and increasing appreciation of other cultures. She plans to expand the project in the coming year.

I think this is really good that we honor our veterans. This is a pretty good narrative essay example that we should follow!

People that obsess over their military service all their lives are the same kind of bozoes that elected a world class criminal as Commander-in-Chief of the American military. The military is a supreme example of a tyrannical, authoritarian organization. It is only people lacking the creative ability to think for themselves who are attracted to authoritarianism. This is why the draft was ended after the Vietnam War. Intelligent people everywhere and at all times have despised tyranny. I was drafted into the Vietnam War during my senior year at Kansas State. When my service time was about finished, I attacked the Admiral of the USS Intrepid for being an Imperialist warmonger, but he wouldn't fight. This is something I will always be proud of.