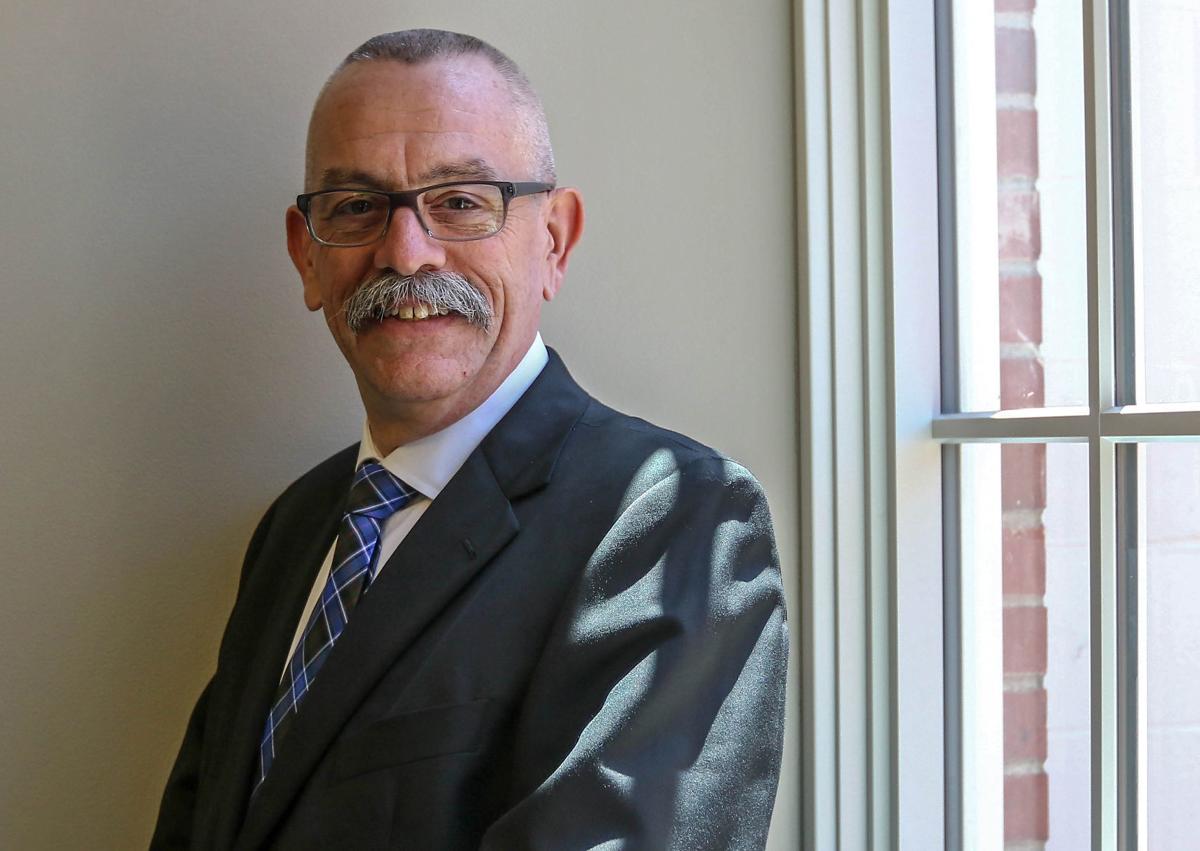 Keith Allen, director of the Roseburg Veteran Affairs Medical Center, is pictured in his office. Allen has requested approval to downgrade the existing emergency room to an urgent care.

Keith Allen, director of the Roseburg Veteran Affairs Medical Center, is pictured in his office. Allen has requested approval to downgrade the existing emergency room to an urgent care.

New Roseburg Veterans Affairs Medical Center Director Keith Allen held his first town hall in Roseburg Tuesday, and he got an earful from veterans about his proposal to convert the emergency room to an urgent care.

Veterans voiced concerns Tuesday about where emergency care will be received and how ER bills will be paid. Veterans also heard from Roseburg VA Office of Community Care Director Rocky Phillips about changes to the way veterans receive non-emergency health care from private doctors. The VA shifted away from its former Choice program to the Mission Act earlier this month.

Several veterans said they’d had trouble getting the VA to pay when they went to Mercy Medical Center for emergency care.

Phillips said the VA can’t guarantee payment unless veterans come to the VA first for authorization, but he said in the case of an emergency they should still go to Mercy first.

One woman said a year and a half or two years ago, her husband had COPD and she couldn’t keep his oxygen up to safe levels. She said the ER at the VA refused him admission because he was in an ambulance, so he was taken to Mercy. She said she received bills for six months or more from Mercy and had to keep asking them to accept small payments and begging them not to hurt her credit rating. She said the VA did eventually pay. No sooner had that been done that she received a bill from the ambulance company, she said, and the process started all over again.

“This is an issue. These people in here cannot, I don’t, have the money to pay a $3,000 ambulance ride or a $25,000 hospital visit,” she said. She said veterans’ families should not have to worry about the bills for an emergency weeks and months afterward.

She also asked now there’s the Mission Act, what happens if a veteran thinks he’s having a heart attack and goes to Mercy, only to be told it was heartburn.

“I just don’t see how anything’s changed from the way it was,” the woman said.

Phillips said the Mission Act doesn’t change anything about the way emergency care bills are paid. He said payment decisions are made by the regional VA office, which bases its decision on what a prudent layperson would do.

A man said a friend of his who served four tours in Vietnam and had chest pains and difficulty breathing received a denial of payment for going to a private hospital. He said he had other veteran friends who had received similar denials and asked what it would take to change that.

Allen said it takes Congress to change the law.

Another man expressed frustration about the VA being unable to address an emergency like a heart attack or stroke.

“The longer I listen to you the more frustrated I’m getting,” the man said. “Because I don’t know why you’re here. If you can’t provide the services that we need, what the hell do we need you for.”

Other veterans, however, praised the quality of care they’d received at the VA and said VA doctors care more about them than doctors in private care.

Phillips said he has dealt with the frustration over bill payments himself.

“We must, by our job, implement the law. We can’t change it, unfortunately. I agree it’s ridiculous, but I personally cannot change that law,” he said.

On the idea of downgrading the ER, Allen said it makes more sense to offer urgent care than emergency care at the VA. Allen told the veterans that 89 percent of patients who come to the emergency department are actually there for urgent care level concerns. He said that emergency physicians don’t want to work at the Roseburg VA because they can’t keep their skills up and they don’t have the backup services like labs and imaging that they need.

Allen said while the Mission Act hasn’t changed anything about the way emergency care at outside hospitals is covered, it has given veterans a new urgent care benefit. The VA hasn’t yet been able to find a private urgent care facility in Roseburg that will contract with the VA.

Phillips said the Mission Act strives to make it easier for veterans to access health care from non-VA doctors in the community. It doesn’t solve every problem, he said, but it is an improvement.

“It’s the next step in the evolution of the program as we move forward. It’s come a long way in the last five years from where we used to have veterans waiting on wait lists, waiting for care,” he said.

Under the Mission Act, veterans are eligible for private care if they would have to wait too long or drive too far to get that care at the VA. That was true of the Choice program, too, but the Mission Act makes it easier to qualify. Under Mission, a patient with a 30-minute drive time or 20-day wait for primary or mental health care could seek outside care under the new act. So could a patient with a 60-minute drive or 28-day wait for specialty care.

Phillips also said the Mission Act has made it quicker for the VA to reimburse private providers, which he said is now being done within 15 days.

He said no veteran is required to use the Mission Act. Veterans who would be eligible but are willing to wait longer or drive farther for services still have the option of receiving their care from the VA, rather than from private providers.

Roseburg VA Director Allen seemed to back-pedal on his previous statement that he requested approval for the change to downgrade the ER to Urgent Care. When asked if he had checked with Mercy to find out if they would be able to accept more veterans the VA would be sending them he stated he would be meeting with Mercy this week and that he had not yet made this request. Per Mercy's website, last fiscal year Mercy had 44,494 ER visits (122/day avg.), and 7,037 admissions. Previously it was reported that Mercy will accept veterans from the Roseburg VA according to the "availability of resources". If Mercy is inundated with patients, Veterans will be taken to Eugene. On June 25, 2013 Veteran Ray Velez died enroute to Eugene. The VA reported at that time that Mercy would not accept Velez. See the Register Guard article "VA's service reduction in Roseburg harms Vets" here: http://projects.registerguard.com/rg/opinion/31214400-203/veterans-icu-varhs-hospital-roseburg.html.csp Director Allen states that 89% of Veterans who come to Roseburg's ER are actually there for urgent care level concerns. Isn't this true of non-VA ER visits as well? After closing the ICU in 2009, the Roseburg VA Hospital was downgraded from a level 2 to a level 3 hospital. Will closing the ER further downgrade the operational level of the hospital? Will the sign at exit 125 be changed to 'VA Urgent Care Facility? Rocky Phillips stated that under the mission act, Veterans do not need prior VA approval for non-VA emergency or urgent care. The VA not paying Veterans non-VA ER bills is a reality and a nationwide problem. NBC's KARE 11did an investigative report last December titled "Pattern of Denial" about this very issue. This television broadcast which includes the confessions of a VA claims processor turned whistle blower as well as links to the 2016 congressional hearing on this matter and the GAO report can be viewed here: https://www.kare11.com/article/news/investigations/kare-11-investigates-a-pattern-of-denial/89-75edb7d8-5e8e-4816-b9b1-6a8106e448e2 In another January 2019 report "New program ensures Vets can get VA care in emergencies", the Milwaukee VA, working with the West Allis fire department and Veterans, ambulances will take Veterans to the Milwaukee VA if the Veteran chooses, even if another hospital may be closer. that story can be read here: https://www.jsonline.com/story/news/2019/01/25/new-program-ensures-vets-can-get-va-care-emergencies/2651234002/ Veterans should read the other blog comments on the NRToday's previous story about this. One Veteran suggested using military doctors to staff the ER and fill vacant positions. What a great idea and they can re-open the ICU as well rather than eliminating critical medical services for Veterans and redirecting ambulances elsewhere. Most veterans are not aware that the VA is in the process of merging medical records and healthcare with the Department of Defense. You can read the February 7, 2019 story here: https://www.disabledveterans.org/2019/02/07/choice-dod-admits-plans-underway-to-merge-with-va-health-care/