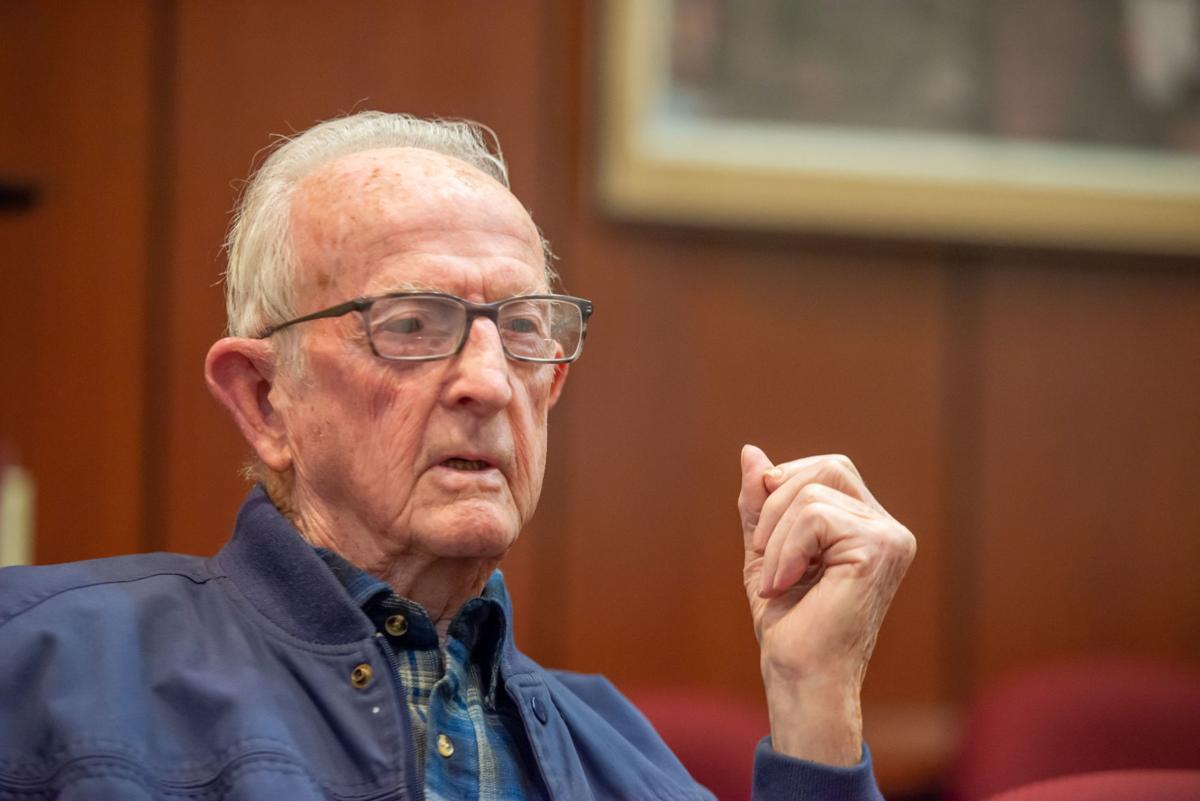 Russel Nelson, 95, discusses his experiences as a radioman in the Marines during World War II while serving in the Pacific Theater. 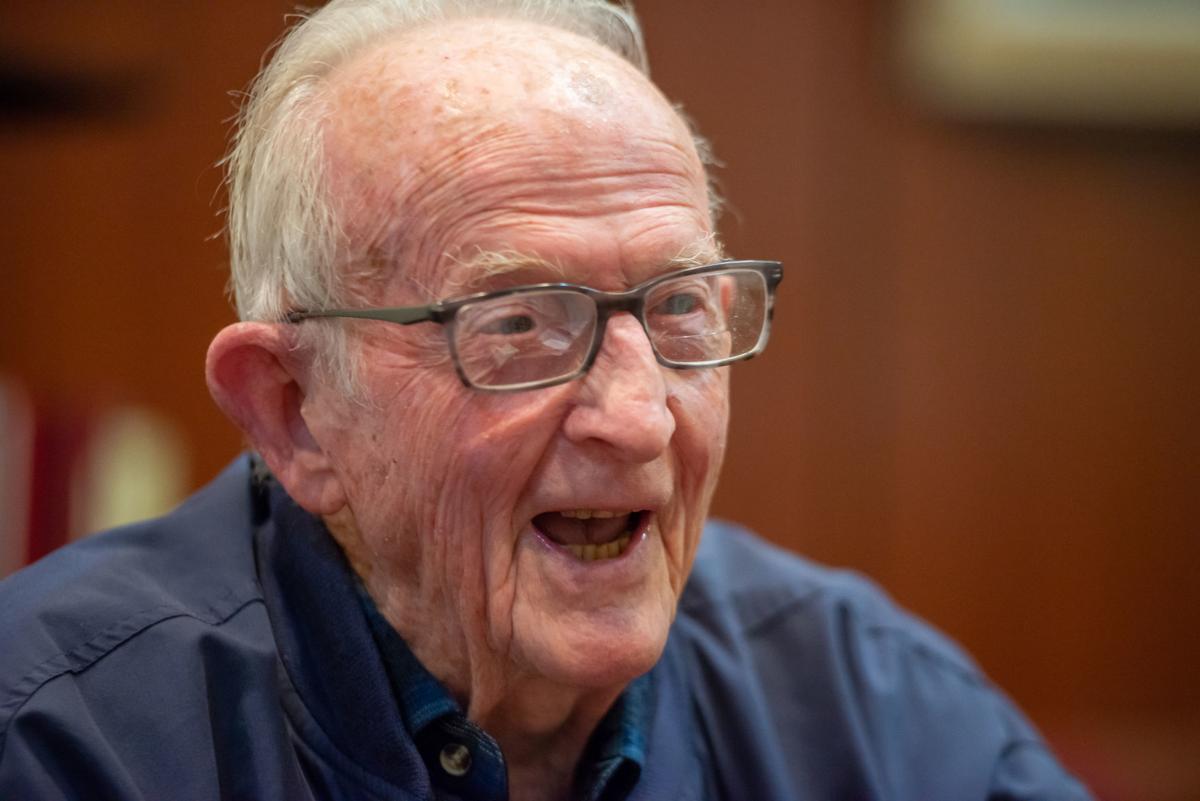 Russel Nelson lets out a laugh while talking about some of his experiences in the Palau Islands, where he served during World War II. 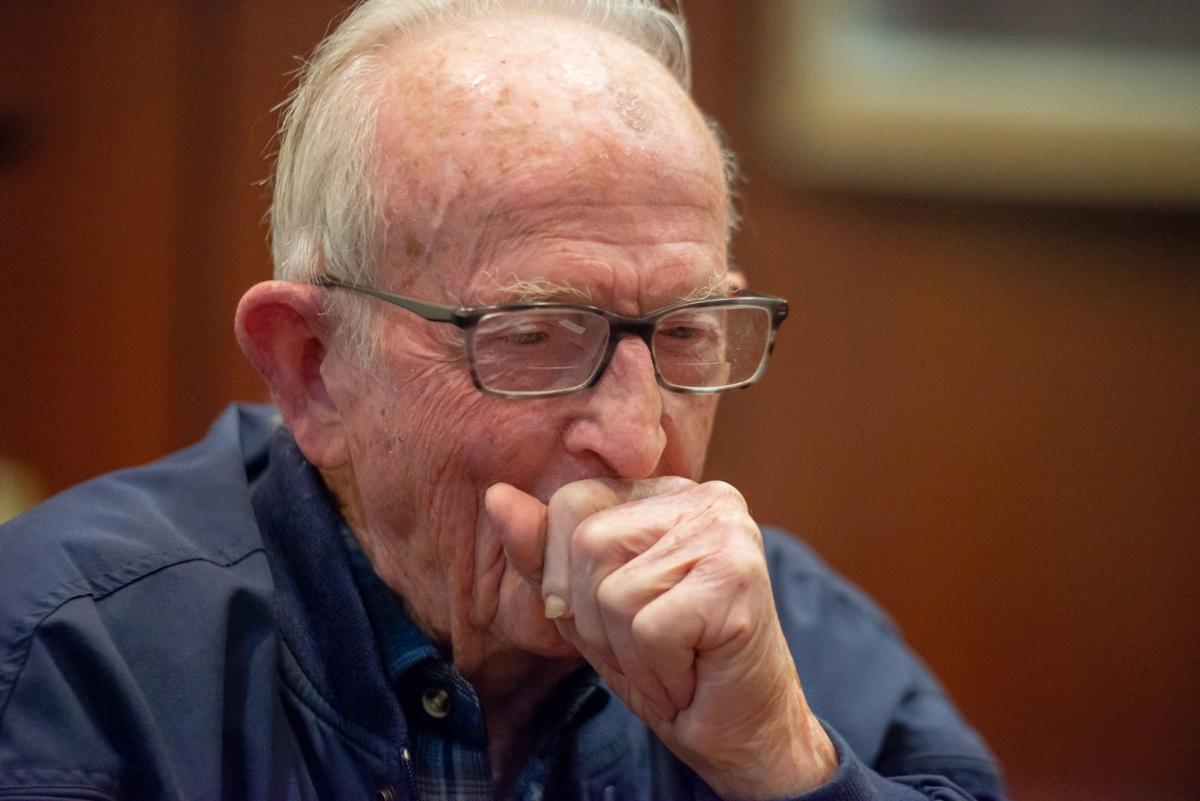 Some events from World War II are still vivid memories for Russel Orley, who served in the Marines in the Pacific Theater. 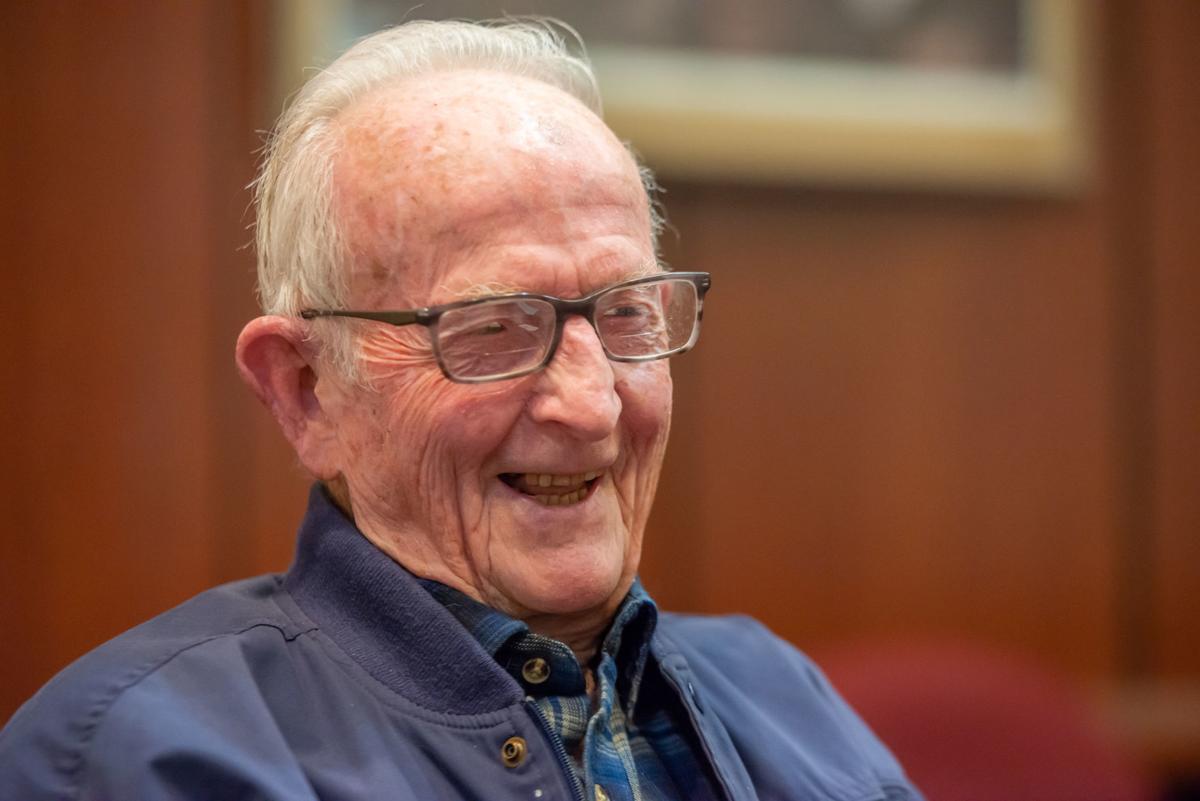 Russel Nelson chuckles during an interview about his experiences as a radioman in the Marines during World War II. 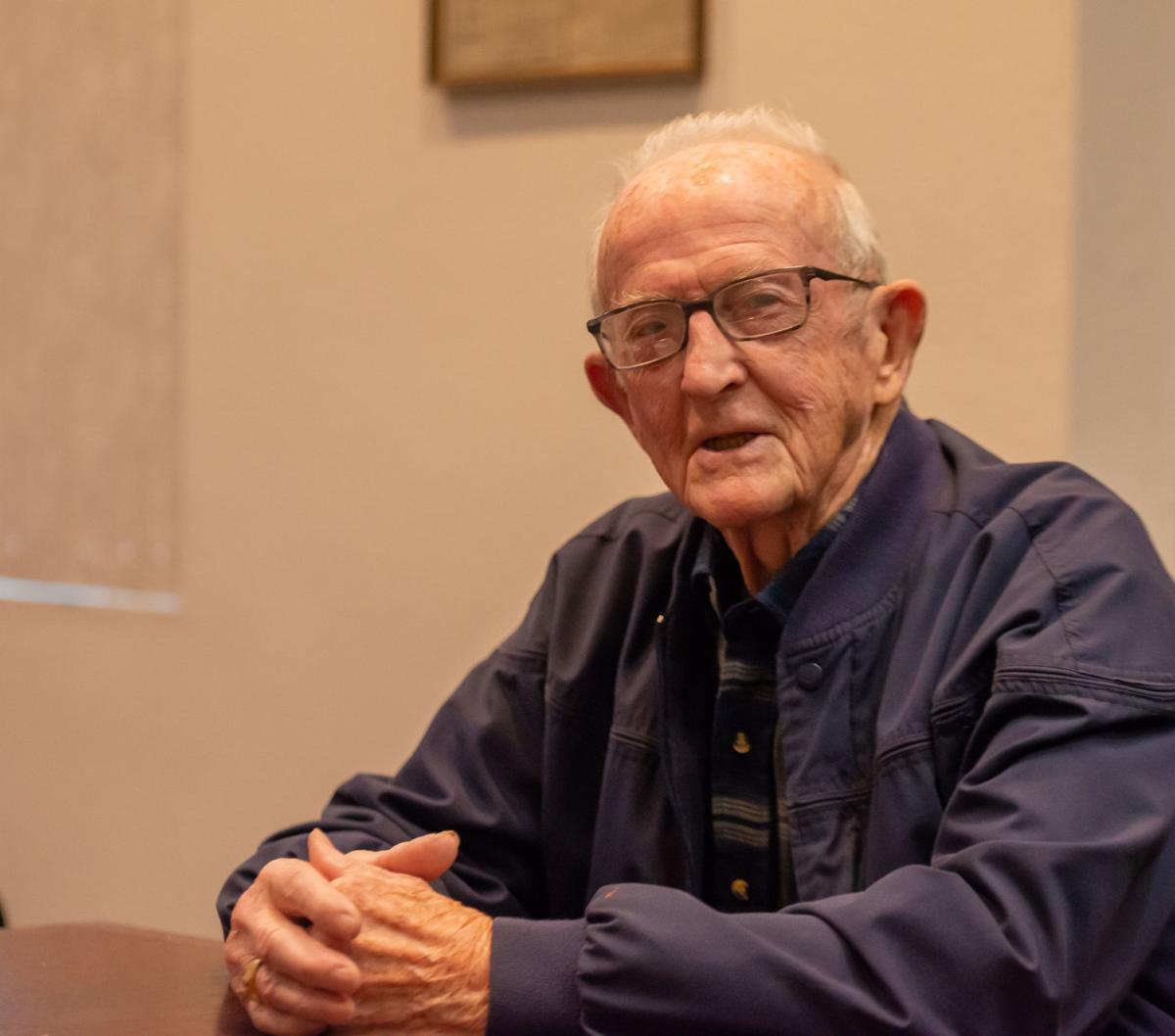 Russel Nelson, 95, volunteered with the Veterans Affairs Hospital in Roseburg until recently. Orley served in the Marines in the Pacific Theater during Waorld War II.

Russel Nelson, 95, discusses his experiences as a radioman in the Marines during World War II while serving in the Pacific Theater.

Russel Nelson lets out a laugh while talking about some of his experiences in the Palau Islands, where he served during World War II.

Some events from World War II are still vivid memories for Russel Orley, who served in the Marines in the Pacific Theater.

Russel Nelson chuckles during an interview about his experiences as a radioman in the Marines during World War II.

Russel Nelson, 95, volunteered with the Veterans Affairs Hospital in Roseburg until recently. Orley served in the Marines in the Pacific Theater during Waorld War II.

Russel Nelson of Roseburg was 20 years old when he was drafted into the military in February 1943.

He chose to join the Marines and was trained as a radioman. About a year and a half later he was dodging enemy fire on a coral island in the middle of the South Pacific.

Nelson served in the Battle of Peleliu, one of the bloodiest to take place in the Pacific theater during World War II. It has been more than 70 years, but Nelson, now 95, still has nightmares about it.

Nelson was born and raised in Nebraska but moved to Sacramento as a teenager. He had loved electronics since he was a boy, and his first experience in radio was when he received a crystal radio set called the Knight Kit. He and his buddies used it to call each other across town.

After growing up, he worked for a telephone company and helped put in the first dial system in Redding, California.

Part of the reason he chose the Marines was because they needed people in communications and his experience fit. Also, he said, the Marines are the best.

After boot camp and radio school, he was first sent overseas in October 1943, as part of the 1st Division, 5th Regiment and landed at New Caledonia, an island group east of Australia. The Battle of Guadalcanal had ended and the Marines were building up strength in numbers to replace the fallen.

While there, since he had taken typing in high school, he was assigned to make lists of the units and create their dog tags. Next, he went to Brisbane, Australia for two months, where he remembers befriending a woman and going to dinners and dancing on a paddlewheel boat.

He next went to New Britain, an island off the coast of Papua New Guinea. They landed in Borgen Bay on the northern part of the island, and then made a difficult river crossing under steady fire from the Japanese.

After they secured the island, they traveled to Russell Island in the Solomon Islands and made camp in mud and a coconut tree plantation. They were there for four months, training and building numbers with newly arriving units.

In September 1944, they invaded the small island of Peleliu, part of the Palau archipelago in Micronesia. Their objective was to capture an airstrip there. And that’s where things really got rough.

When they went ashore, his captain told him to stick close.

“He says you’re my only communication with the units, and he says when I turn, you’re going to be my shadow. When I turn I want to see you there,” he said. “That was pretty scary. I never was wounded. I could hear a lot of bullets and stuff like that going by.”

The Japanese had the advantage in Peleliu. They had dug themselves into the island’s coral caves so well that the American soldiers could pass right by them without knowing it.

There were Japanese soldiers so deep in those Peleliu caves and so well fortified with food and storage, that 35 of them hid out for 18 months after the war ended, emerging in 1947 to discover to their surprise that the war had ended and their side had lost, according to the History Channel.

For the American soldiers, the caves posed a threat because they couldn’t see the soldiers they were fighting.

“There were times that we would go over a hill and go right through the units not knowing, because there was no resistance, and then they’d let us go on and then they’d start firing at us from the back,” Nelson said.

He was with a group of seven men walking behind a tank once when that happened to him. Once they’d passed by, the Japanese started shooting at their backs. Two of the men in his group were killed before the American tank turned around and fired back. It was terrifying, he said.

“You want to crawl in a hole, dig in the sands. It’s scary but it’s part of the work,” Nelson said.

It was a long slog, and he was on the front line for more than a month. They would advance a few hundred feet and then reach a machine-gun bunker of concrete called pillboxes. The Americans took them out with tanks and flame throwers carried by some of the troops.

They were on the island until around Christmastime and then returned to their coconut camp on Russell Island.

In the spring of 1945, they were shipped to Okinawa, and on April 1 the American troops made a beach landing. The Battle of Okinawa lasted 81 days.

During his service on Okinawa, Nelson’s radio saved his life. He and a lieutenant were next to each other in foxholes when a Japanese soldier carrying a rifle and bayonet infiltrated their lines.

Nelson had not taken the radio off his back, and the Japanese soldier’s bayonet bounced off his radio. The lieutenant shot the soldier before he could strike again.

Lt. Gen. Simon Bolivar Buckner visited the forward post on June 18. During that visit, a mortar shell exploded and a fragment of coral struck the general in the chest. He died 10 minutes later, just 50 feet from Nelson.

“I’ve still got a little V on my arm from that shrapnel, but my lieutenant says you got you a first aid kit and it wasn’t that deep. We just patched it over with a little 2-by-2 Band-Aid,” Nelson said.

One of the toughest experiences during the war happened when he was with a buddy from Ohio and a mortar struck and killed his friend.

“That was pretty hard to take, you know, but war is war and you never know,” he said.

The friend spoke to him before he died.

“He told me, ‘Well I guess you’re going to have to go with the unit because I don’t think I’ll be able to make it.’ I said, ‘No, probably not.’ I mean what else can you say,” he said.

Nelson still has to be careful about watching war programs on TV, or it will bring that memory back.

“I’ll watch it and go to bed and dream about it. Wake up about 2 or 3 o’clock in the morning or something like that. So I try not to watch too much war pictures,” he said.

After the war ended, Nelson was stationed in China. In 1946 he returned home, but his parents had moved to Grants Pass and operated a small sawmill.

Nelson moved to Grants Pass for a while, but later went to trade school, and then went to work on early computers at Remington Rand in New York and CMC Computer Measurement Company in California. He said at one time he worked on the power supply for a spy plane.

Later he moved to Roseburg and worked for Sims Electric. For several years he also owned a mom-and-pop store in Tenmile, and later he worked in Mercy Medical Center’s maintenance department.

He said the Roseburg Veterans Affairs Medical Center has given him great care, and he’s given back by volunteering at the VA for 23 years. At the VA, he’s met a number of fellow veterans, including one who was also there when Buckner died and another who was the radioman in a tank and had responded to a call he made for backup while on Peleliu.

Nelson built cabinets in his woodshop at home for years but decided last week it was time to finally retire even from that.

He still enjoys using a ham radio. Fifteen years ago he made a friend on an Alaska cruise with whom he radioed the last Friday of every month at 7:30 p.m. A few months ago he radioed and the friend’s daughter answered. She said her dad had passed away. So now, Nelson radios her periodically.

Even though some of his wartime experiences were frightening and still haunt him at night, Nelson is glad he went into the military.

“That’s the best thing I ever done. I learned a lot. I had a chance to travel. I met guys from all over the states,” he said.