Free
Get Started
You are the owner of this article.
Edit Article Add New Article
You have permission to edit this article.
Edit
Welcome, Guest
N-R
NEWS
Election 2020
SPORTS
OPINION
LIFE
ENTERTAINMENT
BUSINESS
OBITS
CLASSIFIEDS
1 of 5 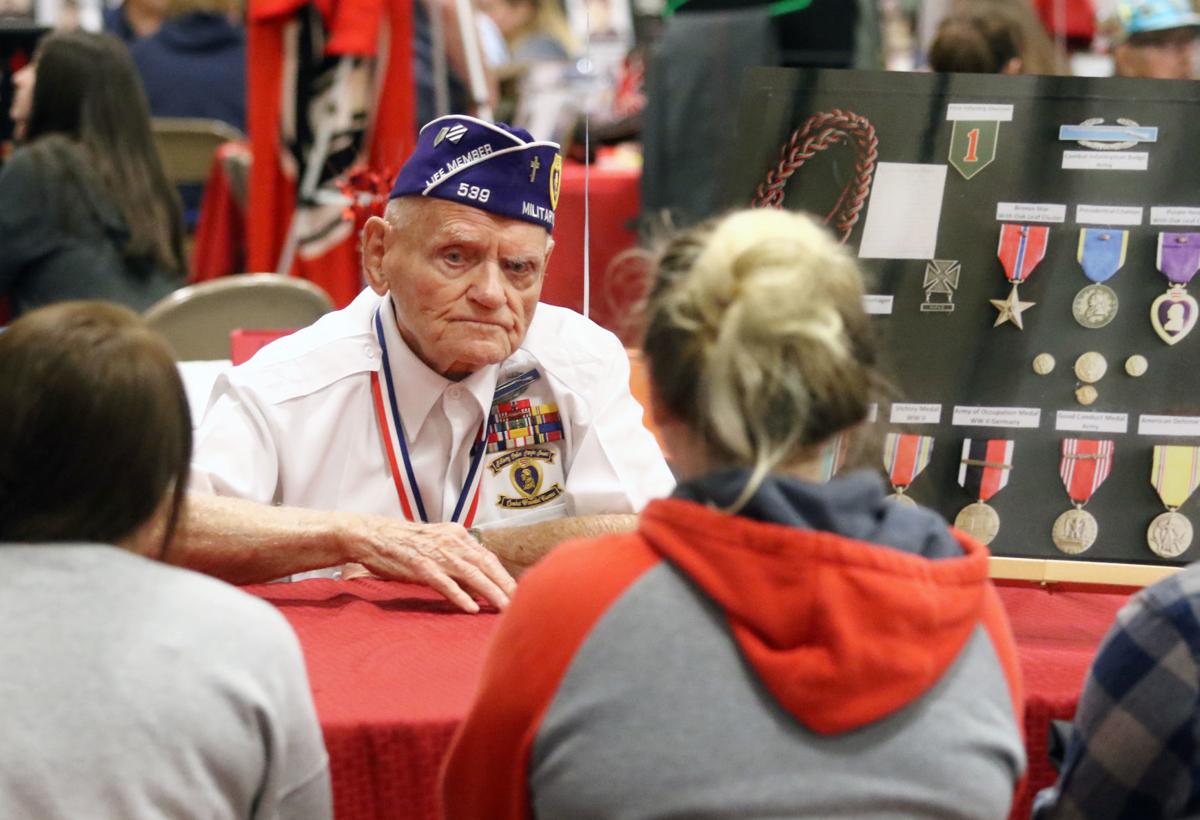 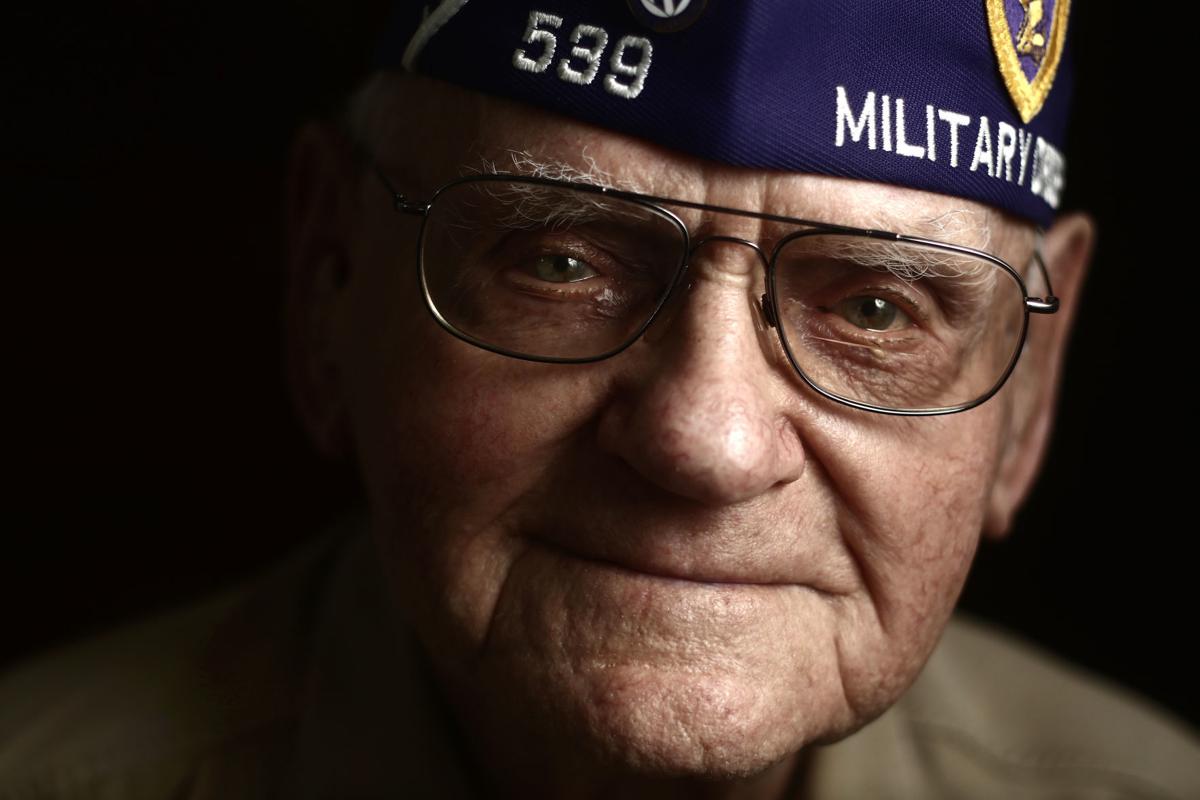 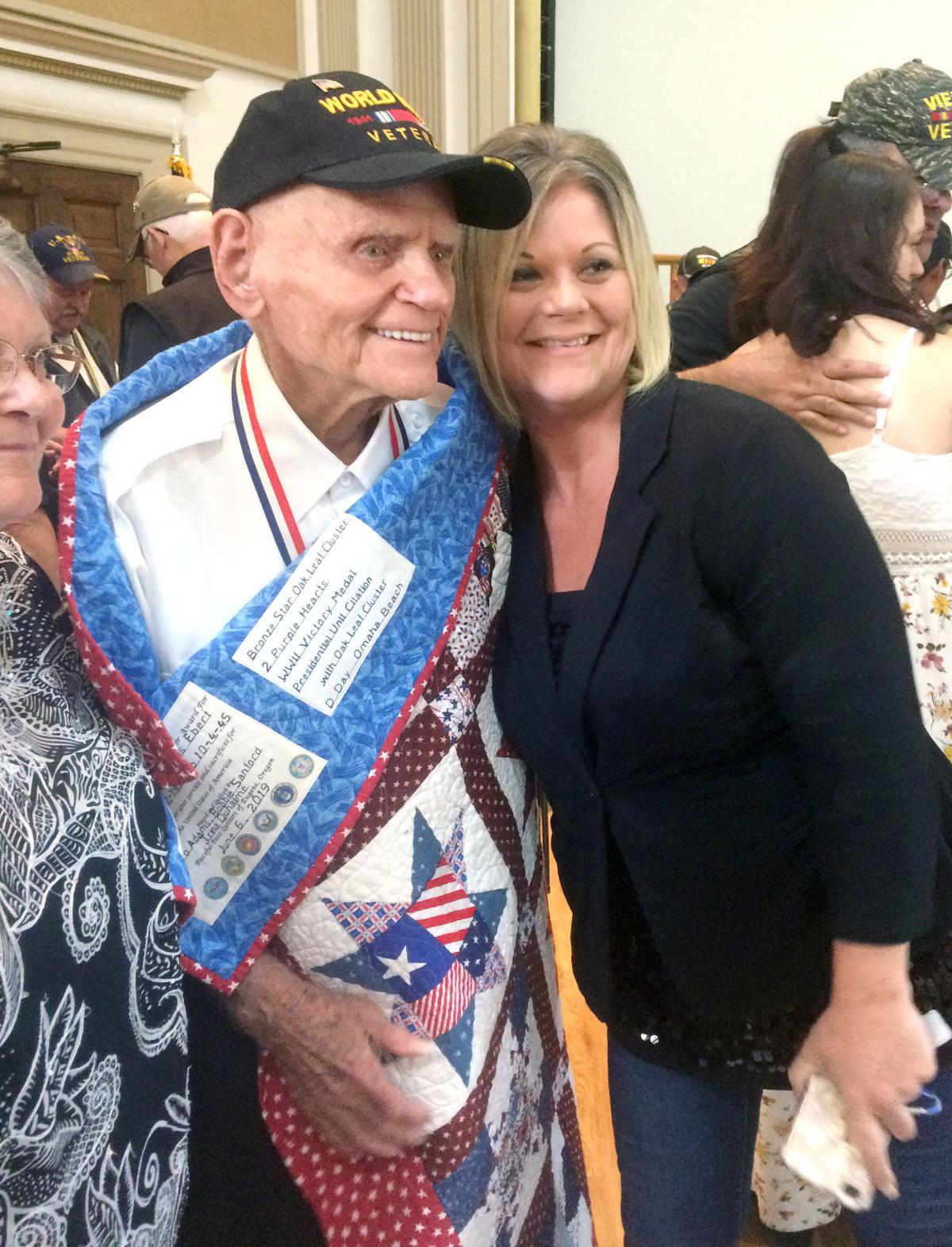 Robin Powers of Roseburg stands with World War II Army veteran Arnold Ebert of Roseburg during a ceremony organized by Quilts of Honor at the Roseburg Veterans Affairs Medical Center in 2019. 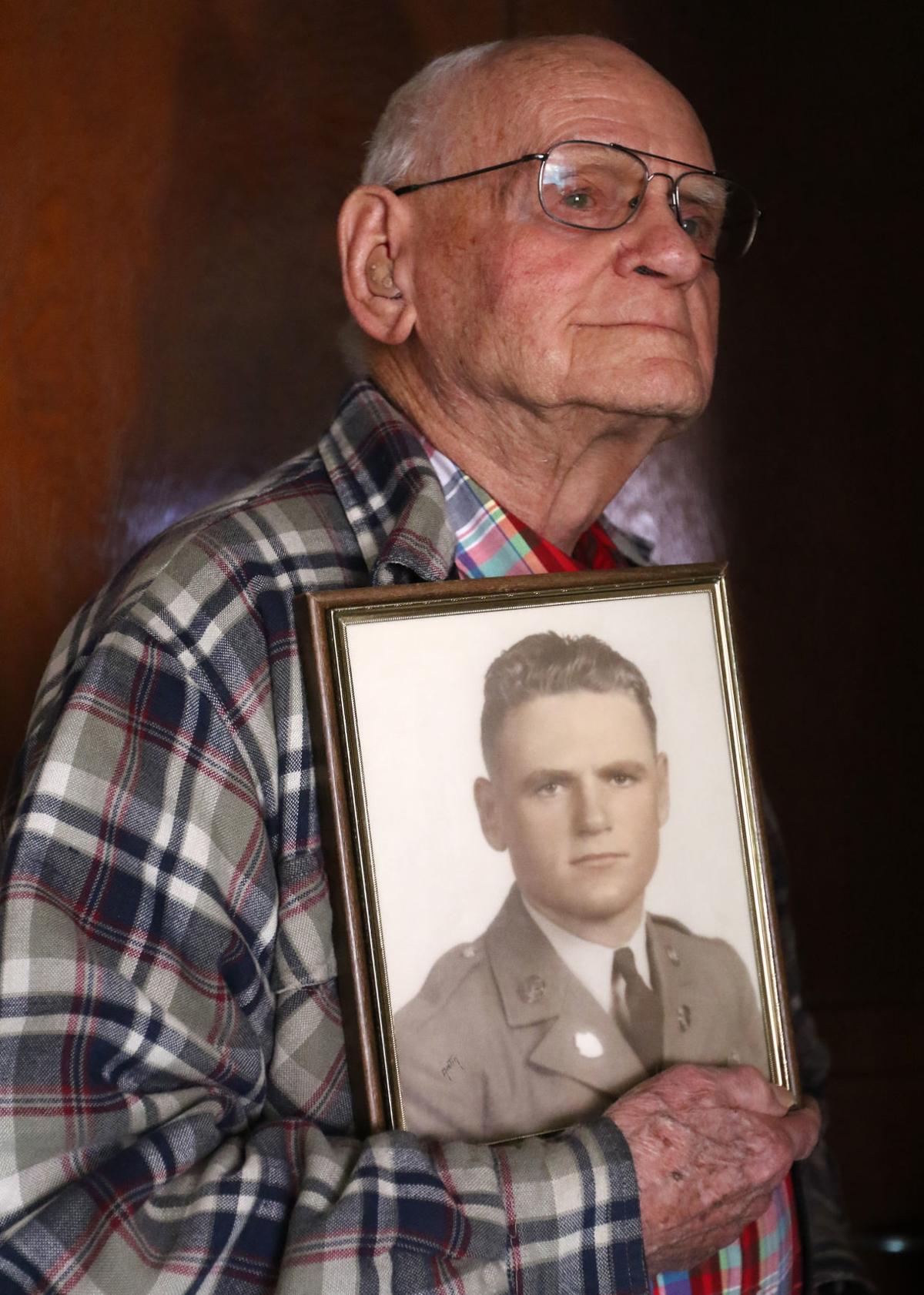 Arnold Ebert, of Roseburg, holds a framed photograph of himself at age 19 in 1939, his first year in the U.S. Army. 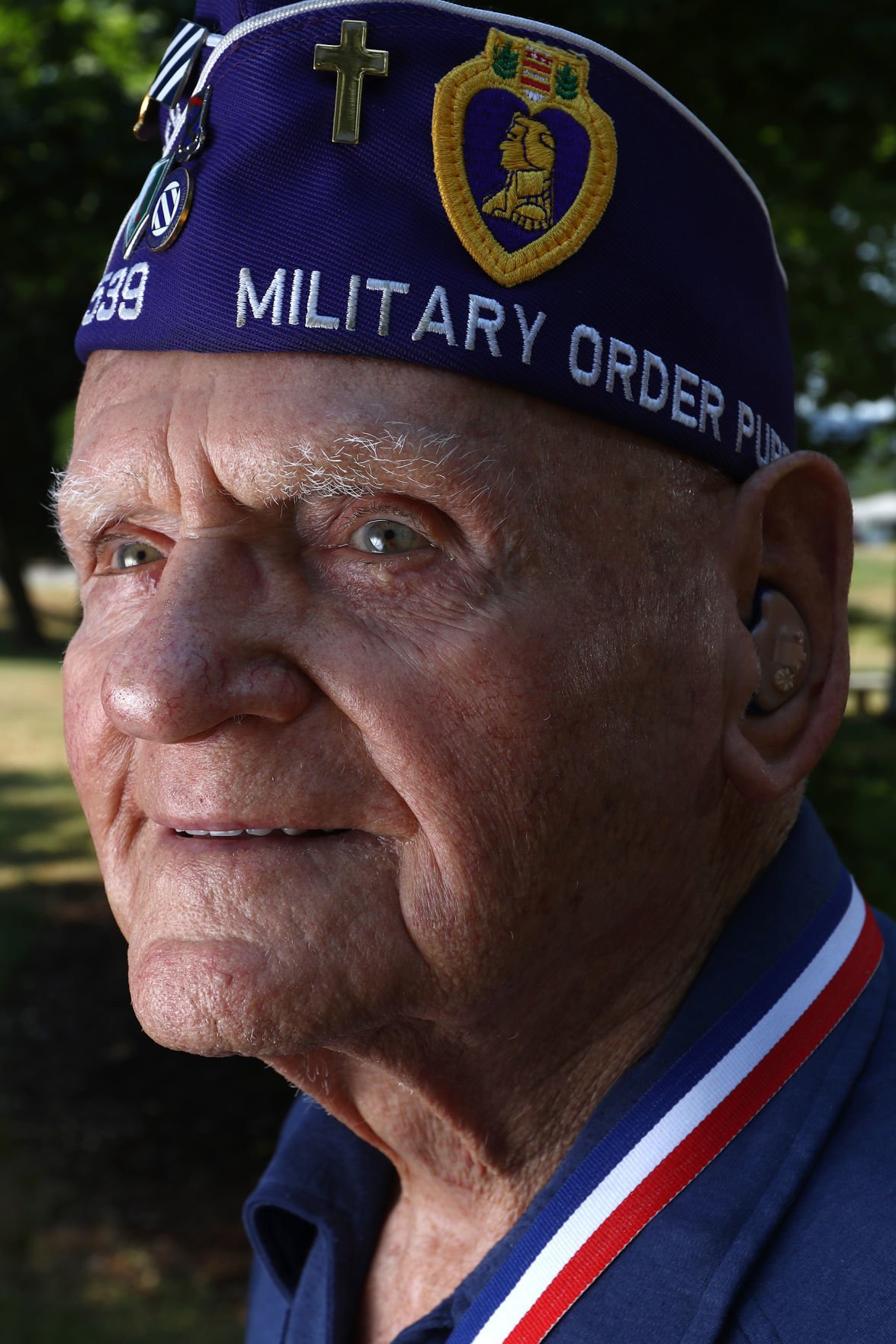 Robin Powers of Roseburg stands with World War II Army veteran Arnold Ebert of Roseburg during a ceremony organized by Quilts of Honor at the Roseburg Veterans Affairs Medical Center in 2019.

Arnold Ebert, of Roseburg, holds a framed photograph of himself at age 19 in 1939, his first year in the U.S. Army.

There was a moment during World War II when U.S. Army veteran Arnold Ebert saw his entire life flash before his eyes and he thought that would be his last day on earth.

But it turned out that Ebert had a lot more living to do. And for almost eight more decades he lived that life to the fullest.

Ebert died of respiratory illness in January at the Roseburg VA Medical Center, and the family announced his passing in an obituary last week.

Those who knew him best said right up until the end he seemed younger than his years. He loved to travel, enjoyed playing practical jokes and liked learning new things.

“I really thought he was going to live to be 105,” said his granddaughter Misty Ross. A track star in his youth, Ebert kept healthy.

“He was jogging all the way up until he was in his mid-80s, when his hip started to bother him and he had to get a hip replacement,” Ross said.

Ebert was already an Army platoon sergeant when World War II began. He fought in Africa and Sicily, participated in the D-Day invasion and the Battle of the Bulge, and was the recipient of numerous awards including the Bronze Star and two Purple Hearts and the French Legion d’Honneur.

“He just really loved going to Elkton and having all the kids interacting with him and sharing his stories,” Ross said. “In fact when he was in the hospital, the elementary kids at Elkton school all made Christmas cards for him. It was really sweet. He was really happy about that.”

During a visit to Sutherlin students in 2018, Ebert spoke about events that happened to him while fighting in Germany.

He recalled capturing a German brewery.

“The big vats were full of beer, and of course we dumped our water cans and filled them up, went back to our positions and drank the beer,” he said.

Luckily, he said, it wasn’t poisoned.

He also spoke about the day he nearly died. The American soldiers had marched all night through four feet of snow to reach a German town they captured. In the morning, the Germans attacked.

Ebert was shot and fell down in heavy snow.

“Everything flashed through ... what I’d done my whole lifetime. I don’t know how to explain that. I said to myself I’m not going home to my wife, I’m going to die right here,” he said.

Five hours later, he woke up in a tent hospital. He was sent home about a month before the war ended.

Ross said she and her son traveled with Ebert to the National WWII Museum in New Orleans, and it was amazing. As they visited displays about each campaign he was involved in, he had something to say about all of it.

“It made it so clear how he played a part in all these huge historical moments in the war, and I was, it’s like wow. It was such an eye opener for me,” she said.

Ebert was gregarious and well known among local veterans.

“He was one of the grand old men who was highly regarded in the veterans community,” said Douglas County Veterans Forum President Larry Hill.

Longtime friend and fellow WWII veteran Frank Moore landed in Normandy on D-Day also, though they didn’t know each other then. Many decades later, the two visited France together, where both received Legion d’Honneur awards.

Moore described Ebert as a fascinating guy, and a loving man.

“He was sure a good friend. He was a very dear friend, a very solid friend, I was blessed to know him,” Moore said.

Ebert was born in St. Louis. He met his wife, Bernice Ebert, at the Oregon State Fair and the two were married in 1942 — but not until after her brothers visited Ebert where he was stationed in San Francisco to check him out. Bernice Ebert died in 2011.

Arnold Ebert was a practical joker, which sometimes embarrassed his wife, who was more of a “straight arrow,” Ross said.

Ross recalled one time Ebert wrapped up an old boot and presented it to her aunt for a present.

“He just thought that was so hilarious when she opened it,” Ross said.

Even into his advanced years he traveled frequently with his caregiver Tabetha Morgan.

Morgan said in the past six years, they visited Mexico twice and also went to the Dominican Republic, Hawaii and Reno.

“He liked to go and do. He never looked his age, either. And he knew it, so he would always say guess how old I am, and people would say 80 something and he would say I’ll buy that,” she said.

He was funny too, she said.

“We had some good laughs. He was quite entertaining sometimes,” she said.

“I think at the core of him, he was kind of a proud American and was really proud of his service to his country,” Ross said.

Ebert’s memorial service will be delayed until next year to COVID-19 restrictions. The service will be held at 10 a.m. Jan. 15 at the Roseburg National Cemetery, followed by an 11 a.m. memorial at Faith Lutheran Church in Roseburg.