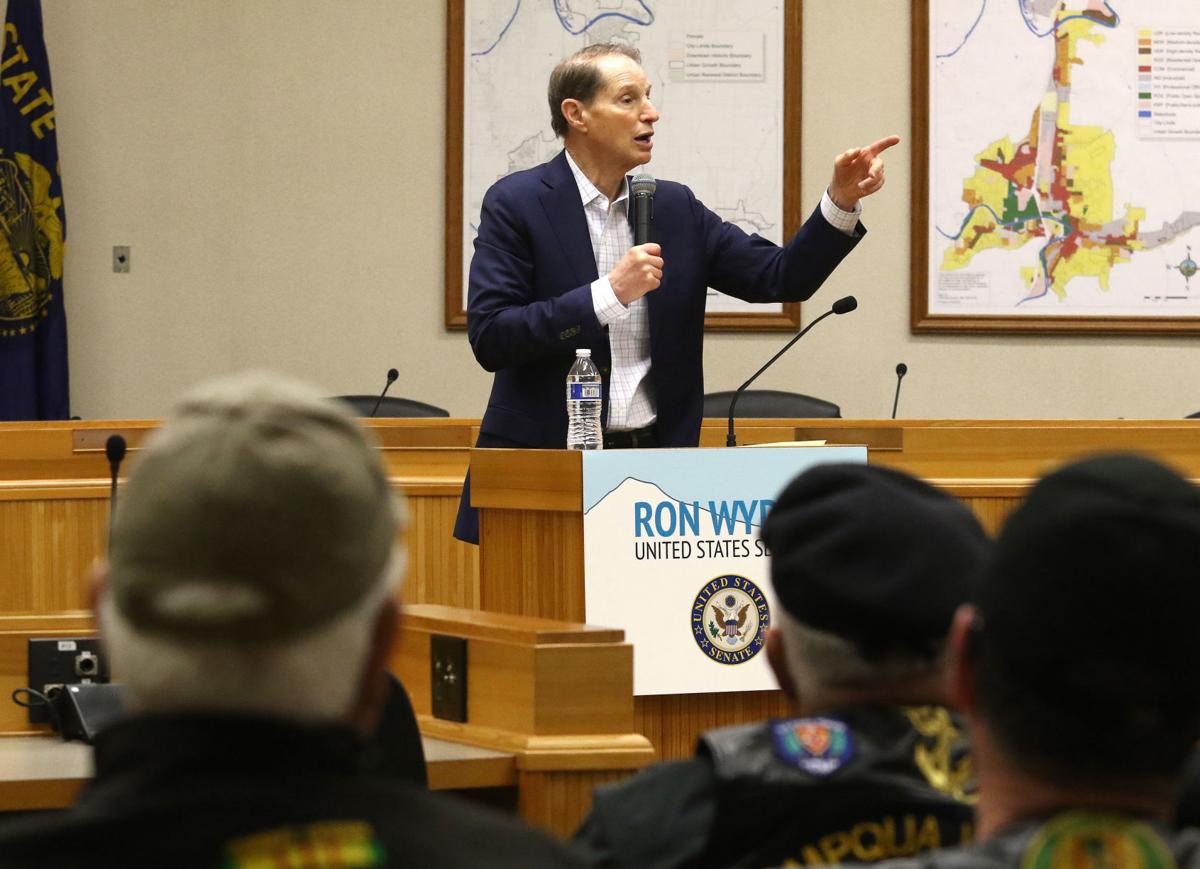 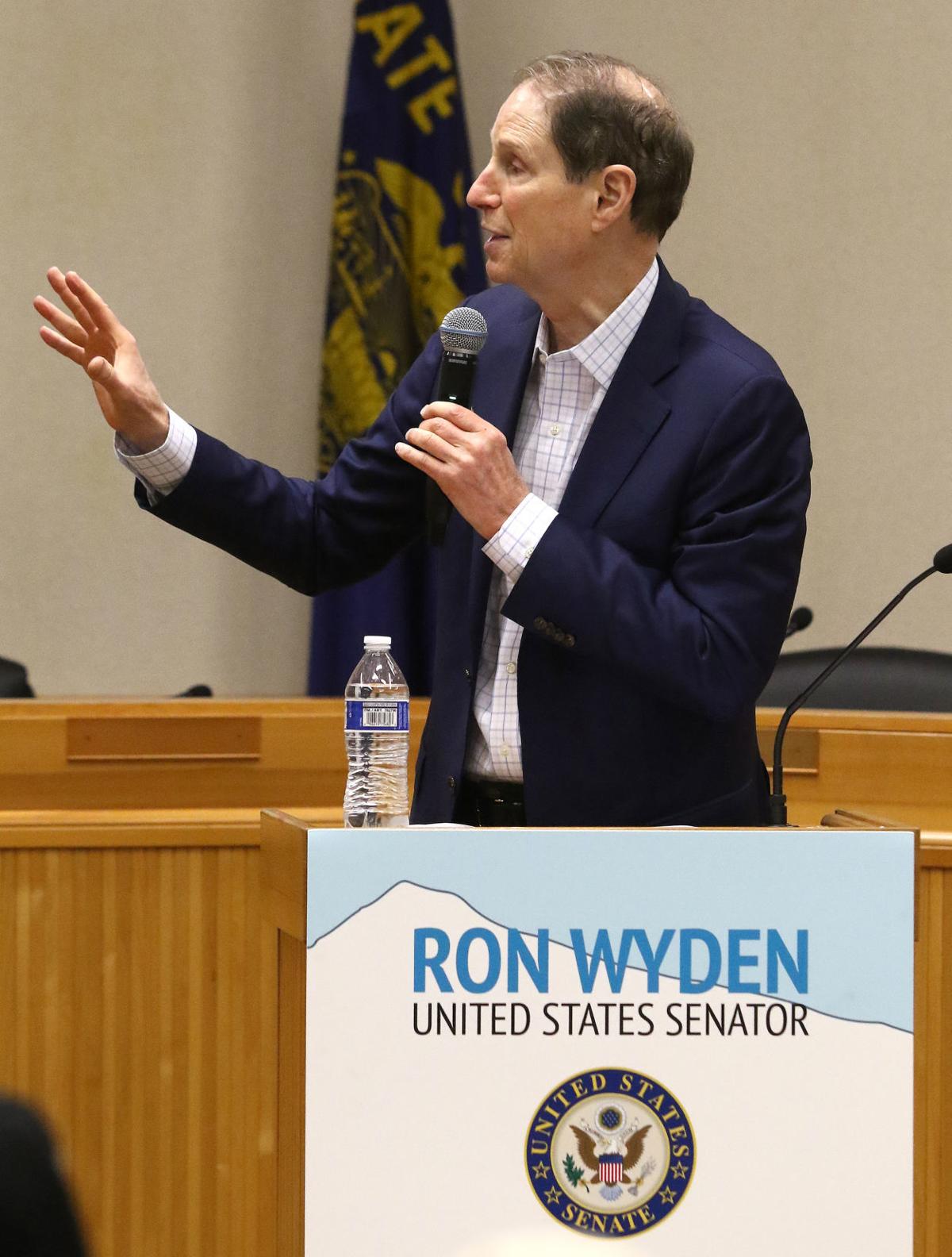 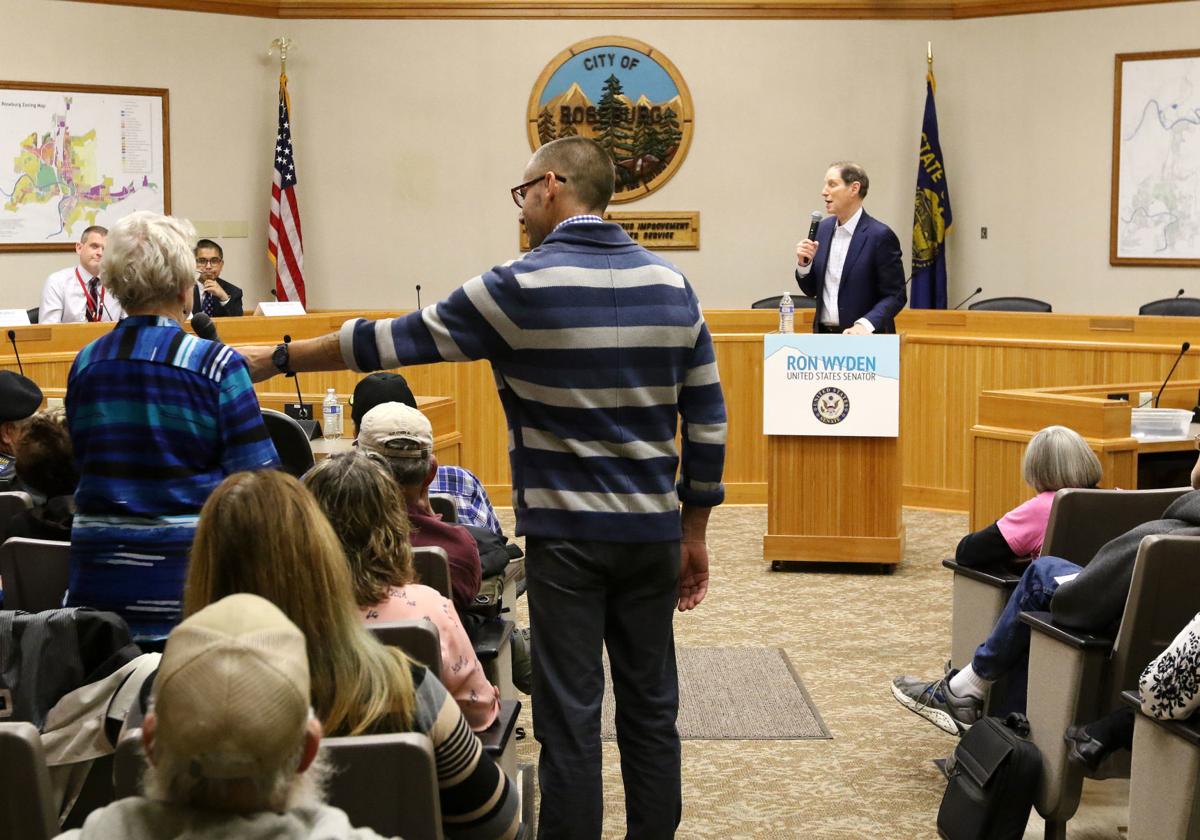 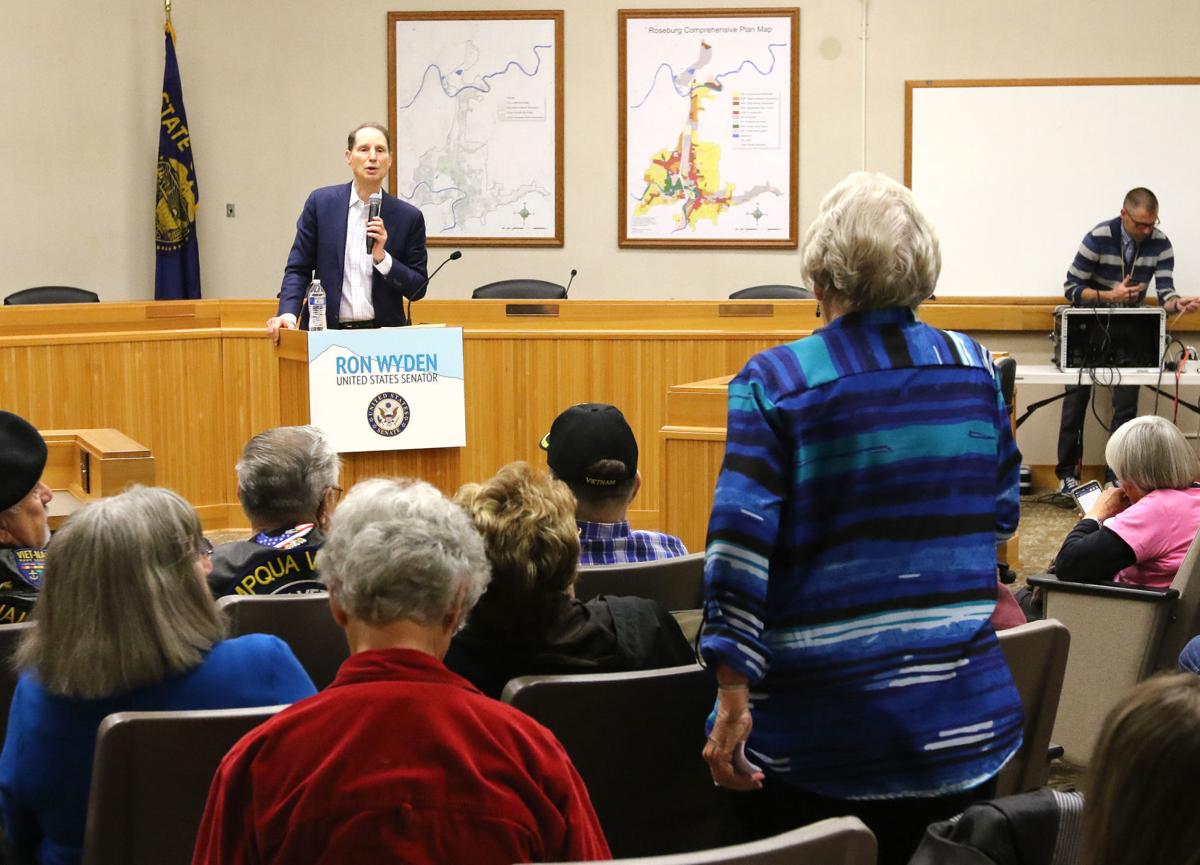 Wyden met with veterans in a town hall meeting at Roseburg City Hall. Veterans raised concerns about pain medications, care for women veterans and veteran suicide, among other issues.

“What you’re talking about is so important,” Wyden said. “I stayed on the Senate Budget Committee to work on improving the funding for veterans, particularly women vets who got not exactly a fair shake in the beginning and are really feeling these cuts disproportionately.”

Roseburg VA Associate Director Ryan Baker told veterans the VA is recruiting to fill both positions. Wyden asked Baker to assure veterans the women’s coordinator position would be filled in 30 to 60 days and the director position in 90 days. He said women veterans could hold both Baker and himself accountable for ensuring that happened.

Onikka Savage, a former VA employee who currently operates Section 8 housing in Winston, spoke about an Air Force veteran who lived in one of the apartments she manages and who committed suicide.

Savage said she had difficulty when reaching out to the VA over an 18-month period to seek help for the man before he shot himself. She said VA officials refused to take information from her, citing Health Insurance Portability and Accountability Act privacy laws.

“The Monday after Armed Forces Day, the cancer center was there to pick him up for treatment and couldn’t get in,” she said.

So she went in and found him dead. She said even after his death, the VA has refused her information citing HIPAA privacy laws.

“I’m giving information. It’s out of concern for someone. Suicide’s a huge thing and this is an epidemic not only in our county but in our state and the nation of course. What does HIPAA have to do with anything when it comes to our veterans and suicide?” she asked.

He said a lot of it is due to chronic illness, and none of what’s been done is close to enough. He said the Federal Communications Commission recently agreed to his proposal to create a three-digit dedicated line for people contemplating suicide. Like 911, but using different numbers, this would be a line with trained professionals at the other end.

He also said he’s the senior Democrat on the Senate Finance Committee, which is working on a rural health package he hopes to get enacted by the end of the year.

He also said he would work on a solution creating a balance between privacy concerns and the need to allow information to be shared when there’s a suicide risk.

Mike Eakin, the commander of the Veterans of Foreign Wars Patrick W. Kelley Post 2468 in Roseburg, asserted that Wyden had once been so outraged he took former Roseburg VA director Carol Bogedain behind the scenes at a town hall meeting and chewed her out.

“We’ve had five directors since then. Your outrage did something, apparently. My concern is that you no longer have that kind of outrage,” Eakin said

He said everything veterans feared would happen has happened, and the VA has been turned from a hospital into an urgent care or a rehab center.

“So where is that outrage Senator Wyden? Do you still have that outrage over what is going on, or have you given in to the VISN-20 network because they’re the ones with the purse strings?”

Wyden said in just the last few weeks he ensured that TriWest, the private contractor that manages the network of urgent cares where veterans can receive services outside the VA, would contract with a Roseburg urgent care so veterans could receive urgent care treatment on weekends. The VA announced Wednesday that the Umpqua Health Newton Creek on Stephens Street in Roseburg is now in its network. The VA’s own urgent care is only open five days a week.

Wyden also said he guarantees he’s outraged, and so is Rep. Peter DeFazio.

“It’s why we have kept battling away in the Budget Committee, with the efforts of our congressional delegation, because we know that business as usual is unacceptable,” he said.

Vietnam Veterans of America Umpqua Valley Chapter 805 President Frank Escalante said the VA has overreacted to fears of opioid addiction by taking away medications veterans need. The pendulum has swung too far, he said.

“The first thing they did in 2016 was take away my pain meds. I’m in pain all the time,” he said. “These guys that are committing suicide are not getting their pain meds.”

Wyden said large pharmaceutical companies had pushed opioids to the point they were given to everybody. However, he also said the pendulum always swings to the extreme and it’s important to find a balance.

“What I’ve been trying to do is support those things that try to get to where you’re talking about, a kind of balance on the pendulum so people don’t suffer when they’re in enormous pain, but we’re also not peddling pills every which way,” he said.

Thank you, Senator. You've held some 950 town hall meetings, plus focused meetings like this very, very productive, action-oriented session. You listened, you acted in the interests of your constituents. I was there for this one (I'm a veteran, with nearly 36 years of service (over twenty on active duty, and over a decade of reserve time)), and I am hugely impressed. Thank you!