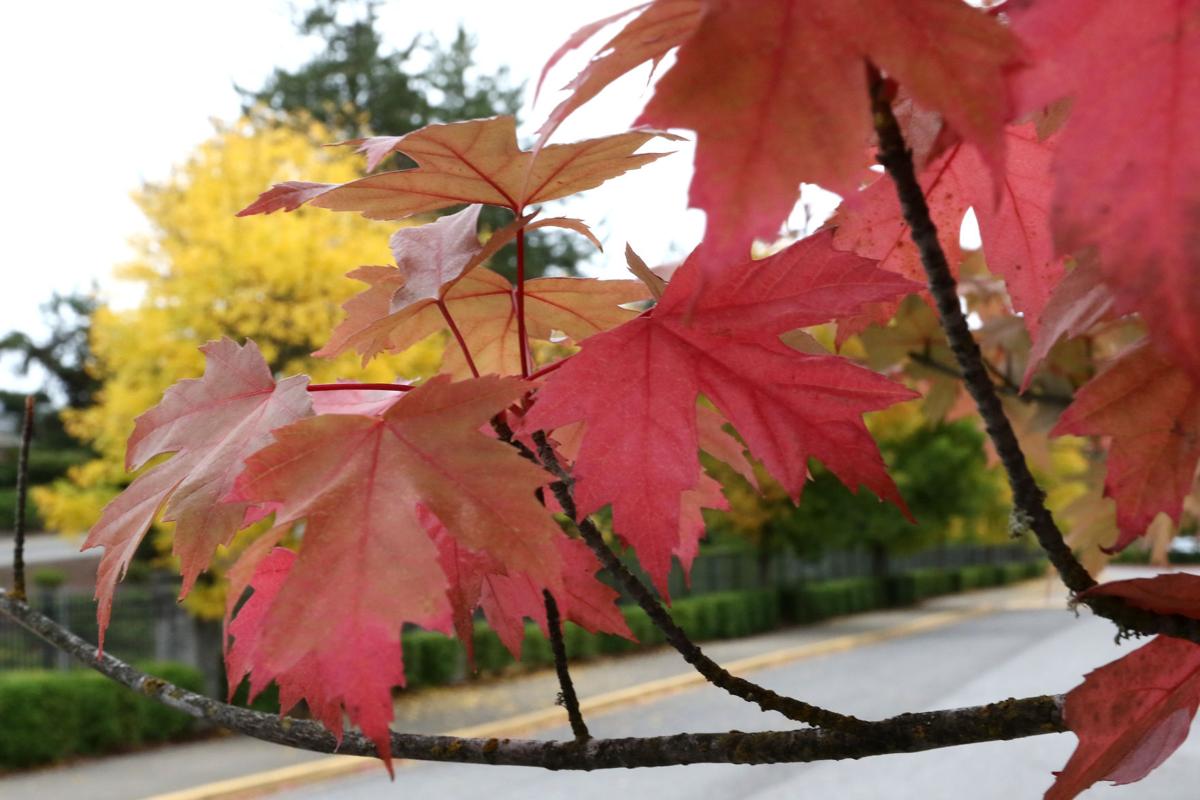 Autumn colors start to transform several trees near Roseburg High School on Friday. Fall colors are arriving early as foliage starts going into hibernation due to the dry conditions that have plagued Douglas County this year. 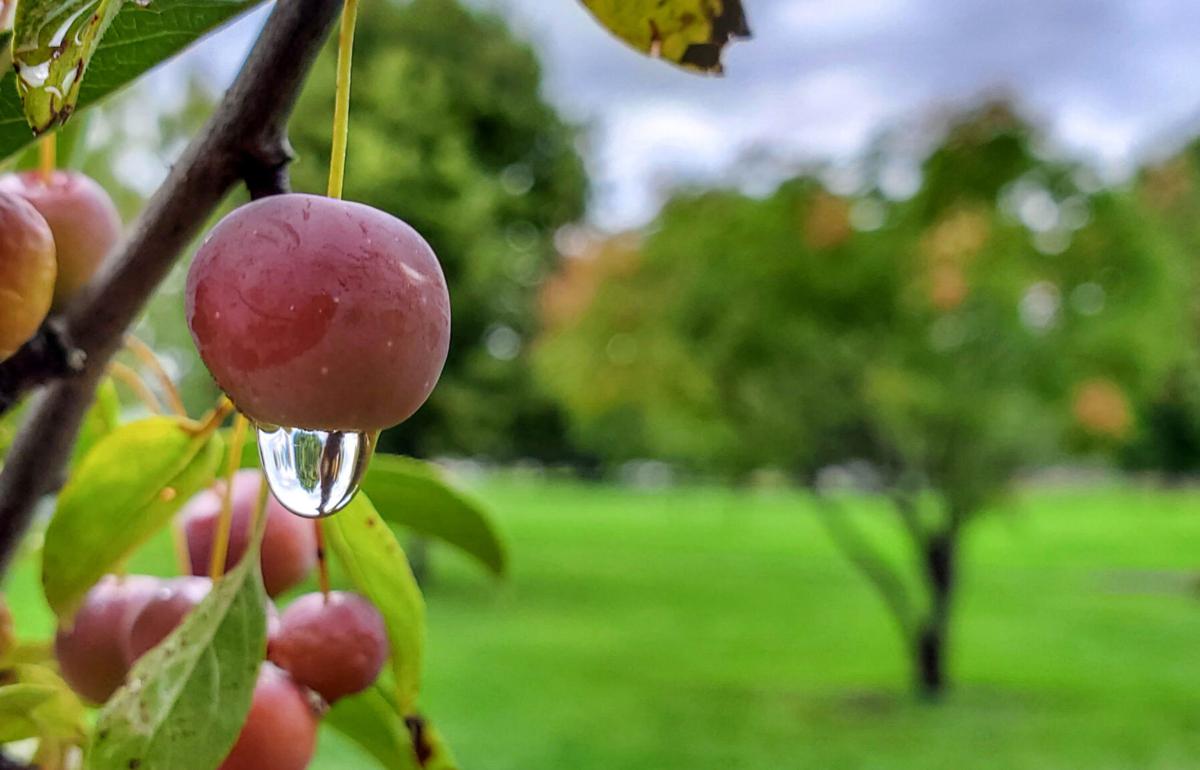 A raindrop from a recent storm clings to a plum near Stewart Park in Roseburg. The recent rains this month have helped alleviate drought conditions in Douglas County, and long-term forecasts predict above-average rainfall heading into December. 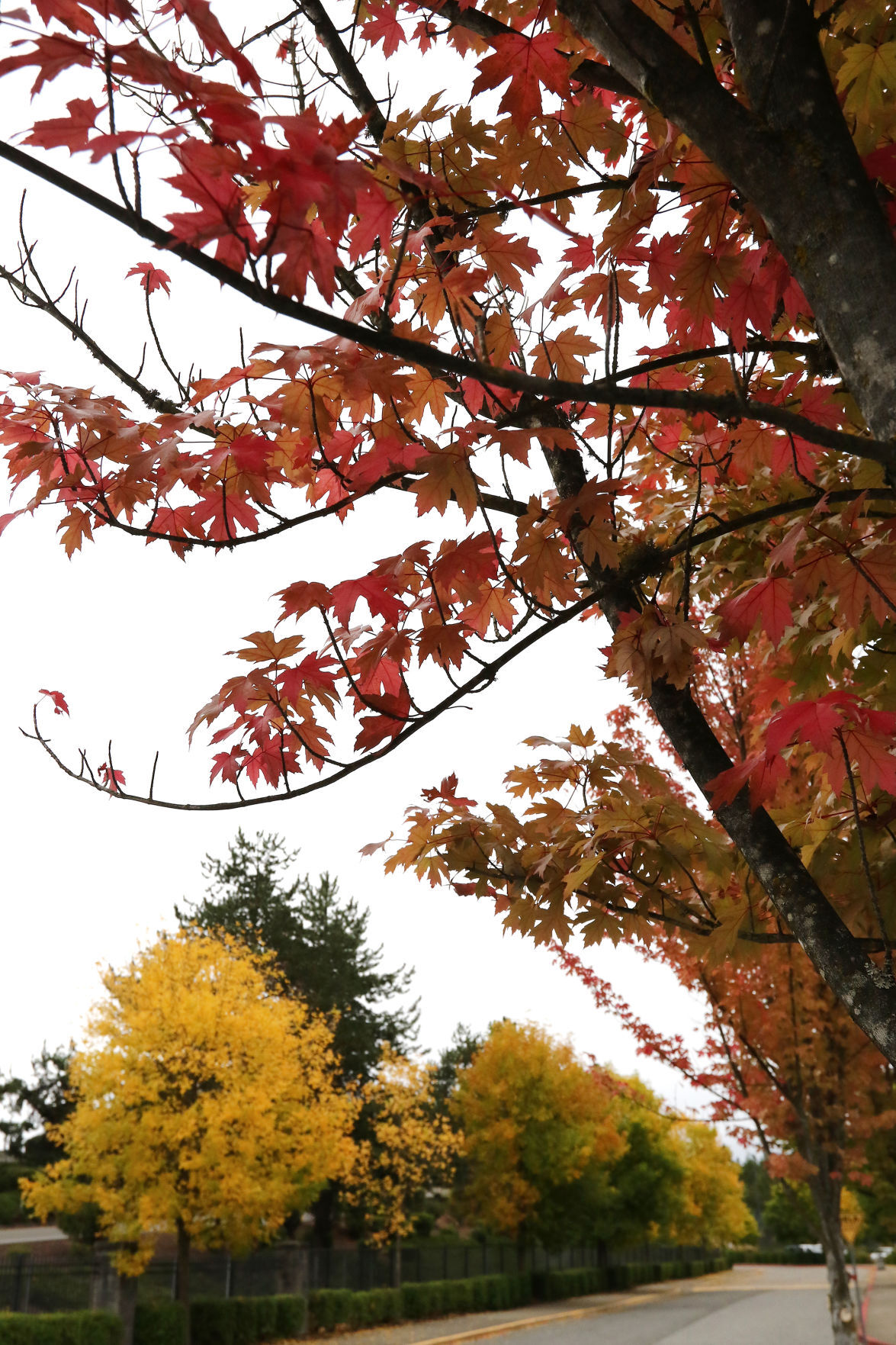 Autumn colors start to transform several trees near Roseburg High School on Friday. Fall colors are arriving early as foliage starts going into hibernation due to the dry conditions that have plagued Douglas County this year.

A raindrop from a recent storm clings to a plum near Stewart Park in Roseburg. The recent rains this month have helped alleviate drought conditions in Douglas County, and long-term forecasts predict above-average rainfall heading into December.

Susan Douthit wasn’t about to hide her excitement about Douglas County’s precipitation forecast through the end of the year.

“If it does what they’re saying it will, I’ll do backflips,” said Douthit, a watermaster for the Oregon Department of Water Resources who represents much of southern Oregon. “Not just cartwheels. Backflips.”

The much-needed precipitation Douglas County has received over the past two weekends has helped in more ways than one. Not only has it aided low streamflows in the area, but it’s given a substantial boost to the 1,000 firefighters battling the Archie Creek Fire east of Glide.

All of that came after a months-long dry spell — no measurable precipitation anywhere in the area — that spanned 95 days until Sept. 18, when the National Weather Service in Medford reported .32 inches of rainfall. Since then, approximately 1.03 inches of rain have fallen this month, putting Douglas County above the 30-year average of .78 inches for the month as of Sept. 26.

Regardless, when the rain year resets on Oct. 1, Douglas County will finish well behind its average annual rainfall. As of Sunday, Douglas County had received 23.49 inches of rain compared to a Sept. 27 average of 36.08 inches.

“I haven’t seen it like this since I’ve lived here, and I’ve been here since 1965,” said Mike Winters, a former Douglas County commissioner who owns Wintergreen Nursery Landscaping and Florist in Dillard. “For four, maybe the past five years, we’ve had below average snowpack and well below average rainfall. When that happens, the ground isn’t replenished enough.”

Although the official cause of the fire remains under investigation, officials with the Douglas Forest Protective Association affirmed the dry conditions were a major contributor to the start of three wildfires in the Glide and Idleyld Park areas on Sept. 8. Two of them — the Star Mountain Fire and the Archie Creek Fire — quickly grew into blazes of more than 8,000 acres each before high, dry winds helped them combine into the current Archie Creek Fire that is now 64% contained.

It’s also contributing to extremely low streamflows in the county, which had a cumulative average streamflow of only 75% of average while reaching only 53% in some parts of the county, according to a Sept. 21 report released from the Oregon Department of Water Resources. The county is also one of 14 Oregon counties that Gov. Kate Brown issued an emergency drought declaration for. Much of western Douglas County is in what the agency considers an “extreme drought.”

The effects are far reaching, and some signs are right in the forefront.

Winters said the sustained drought conditions have resulted in extremely low groundwater levels. Information provided by NASA that was included in the bi-weekly report showed much of southern Oregon’s ground water moisture at 10% or less of the 64-year average from 1948 to 2012.

This year, signs of fall colors started showing as early as late August.

“The ground soil really needs to be recharged,” Winters said.

Douthit said her agency lost a pair of flow measurement gauges on the North Umpqua River from the Archie Creek Fire. As for the low flows on the river, according to Evan Leonetti at the Oregon Department of Fish and Wildlife, the agency won’t know the current drought condition’s effects on the local aquatic wildlife until returns can be tracked.

“We definitely monitor populations over longer periods of time and will know more about how the fish fare by the adult returns in the future,” Leonetti said.

The near future is looking much more promising, though.

Unlike predictions earlier in the month from the National Oceanic and Atmospheric Administration that called for above average temperatures and normal rainfall for southern Oregon, the NOAA predicted above-average rainfall for October through December in the state agency’s Sept. 21 water report.

It has Douthit, and likely others in the area, hopeful of a return of a weather pattern more typical for Douglas County.

“It would be really advantageous for us to get a really good snowpack this year so we could replenish our reservoirs,” she said. “But what we really, really need is a steady, slow, sticking rain that really soaks into the ground and doesn’t cause problems with all of those burn scars caused by the fire. If we get something hard and fast, people will wind up changing out their water filters like crazy.”

Jon Mitchell is a page designer, photographer and writer for The News-Review. He can be reached at 541-947-4214, or at jmitchell@nrtoday.com. Or follow him on Twitter @byJonMitchell.

According to the article, "Satellite and infrared imagery provided by NASA that was included in the bi-weekly report showed much of southern Oregon’s ground water moisture at 10% or less of the 64-year average from 1948 to 2012."

I wasn't aware Satellite and infrared imagery was available in 1948 to compare to.

Fair enough. That was just updated for clarity. Thanks Mike!

Nice article and great news. I've said before, and will likely say again, the News-Review could use a copy editor. The caption on the picture refers to "hybernation" and other errors are rife within the article. Here are some:

Much of western Douglas County is what the agency considers an “extreme drought.” (is in, perhaps?)

"Satellite and infrared imagery provided by NASA that was included in the bi-monthly report showed..." (I think the reference is to the bi-weekly report.)

Good news, though! And the article is still pretty fine. Copy editor!

Things fall through the cracks from time to time. My fault ... those things are fixed now. Thanks for the feedback! [smile]

Jon, Thank you for your attention, and: you will recall the Doonesbury character, Boopsie, who channels a 21,000-year-old warrior named Hunk-Ra. I have two of them, and inner pedant and a schoolmarm (close cousins). Thank you for heeding them. You would not like them mean. Good article, good news; thank you.