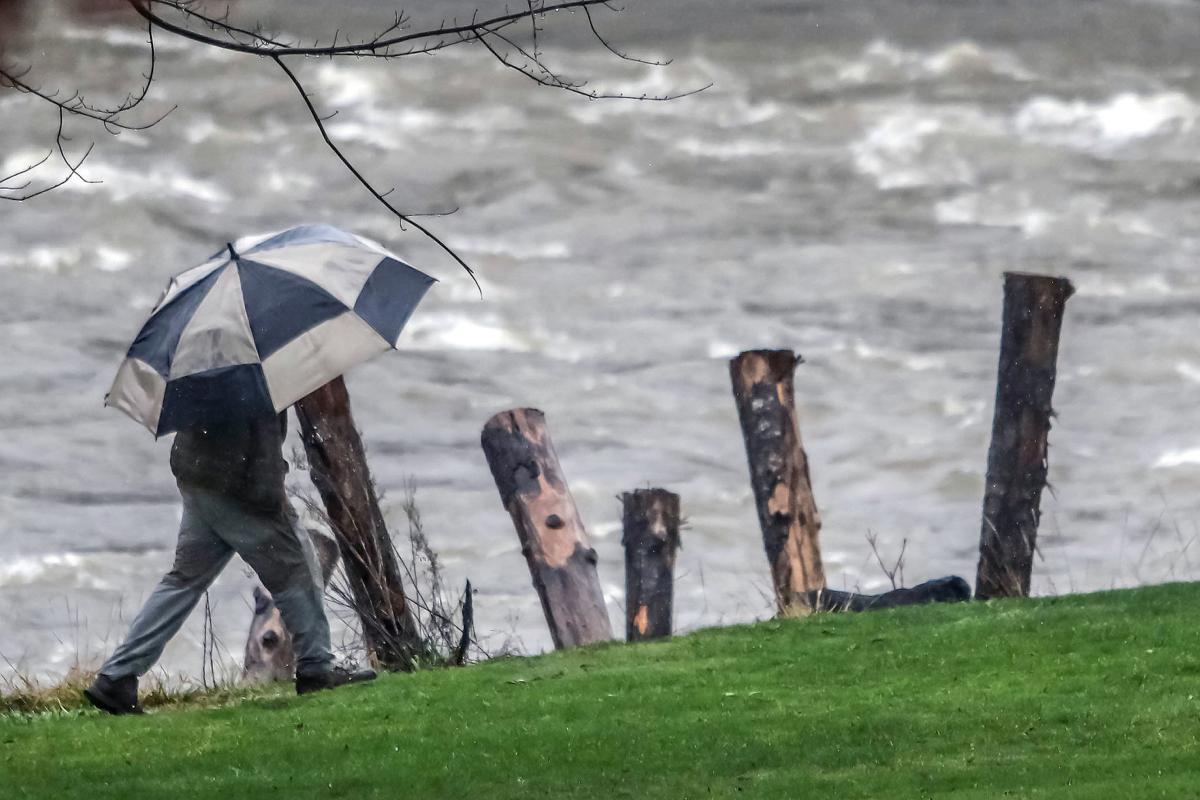 A man braves cold temperatures and a steady rain while walking along the South Umpqua River at Stewart Park on Monday. 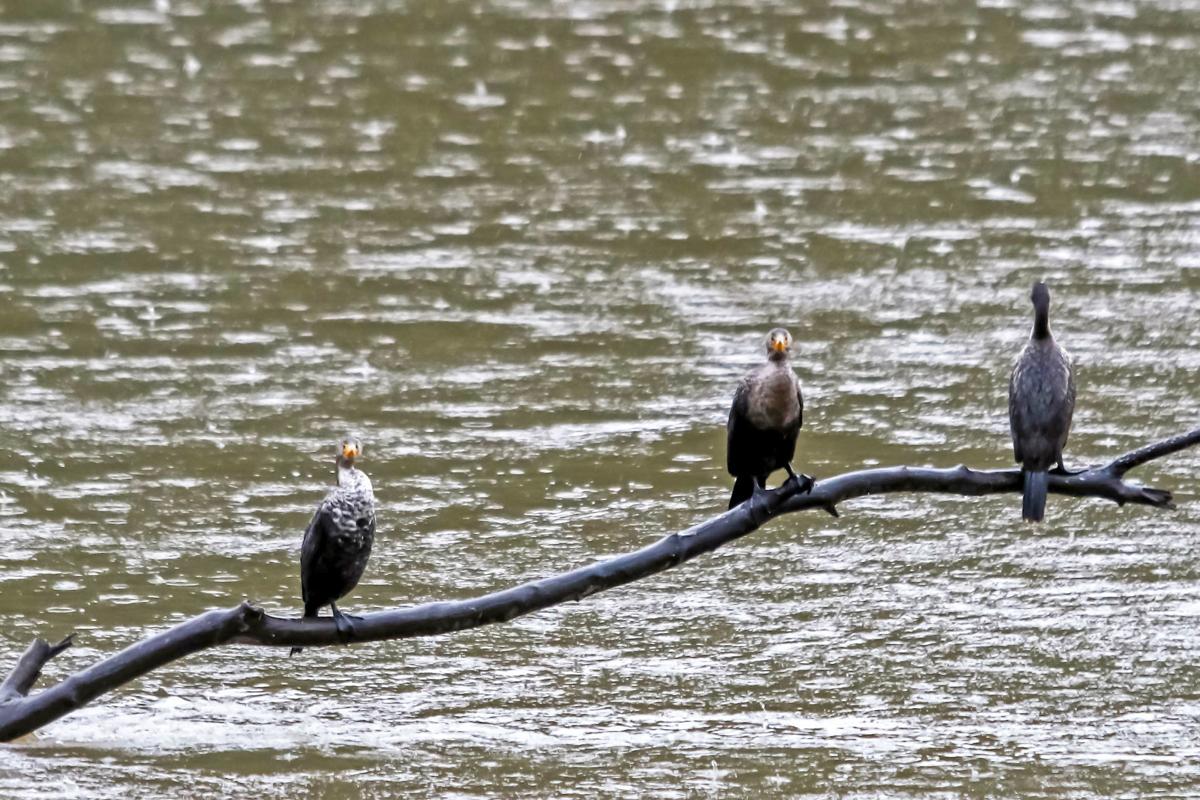 Three birds are content to wait out the rain on a branch sticking out of the muddy South Umpqua River along Stewart Park on Sunday. 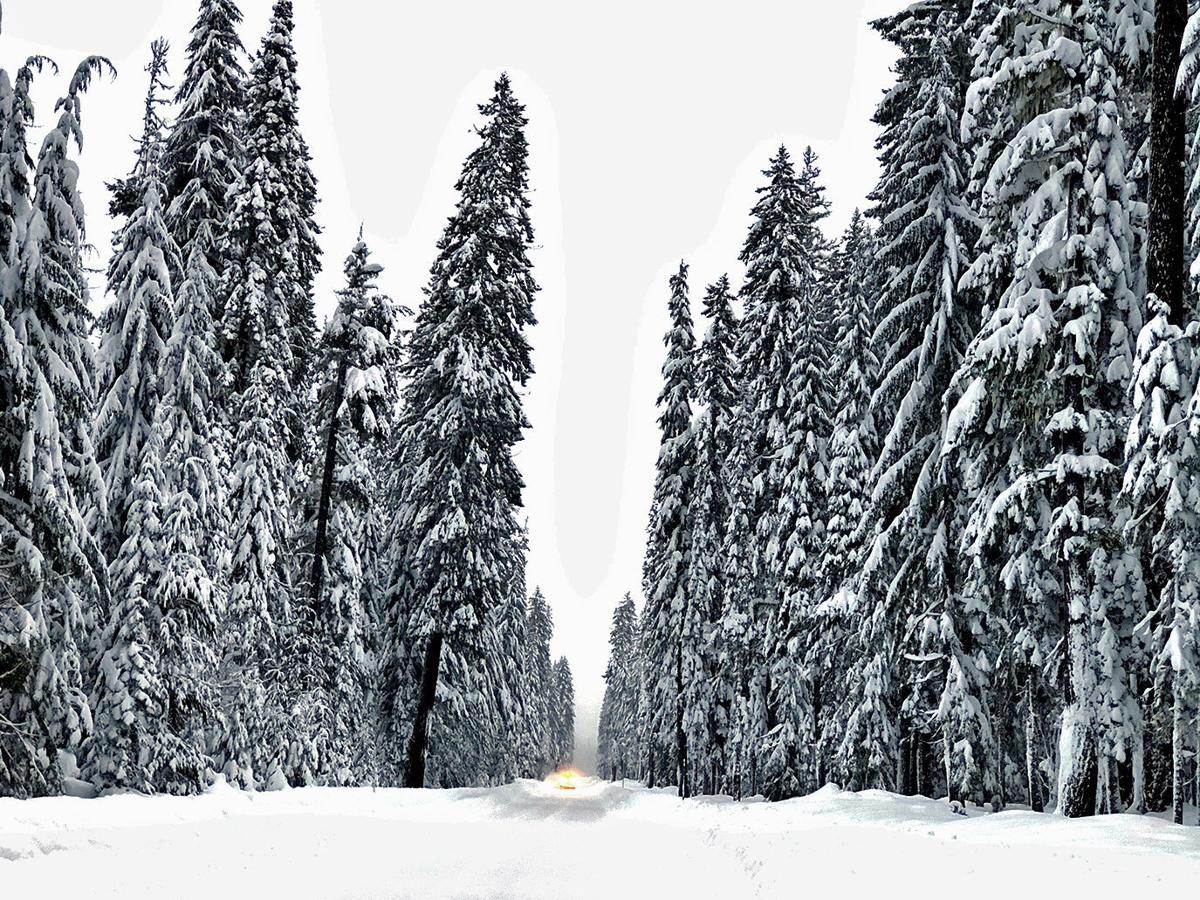 A car travels on Oregon Highway 230 between snow laden trees this past weekend. The highway is now closed from Highway 138 near Diamond Lake to the intersection of Highways 230 and 62.

A man braves cold temperatures and a steady rain while walking along the South Umpqua River at Stewart Park on Monday.

Three birds are content to wait out the rain on a branch sticking out of the muddy South Umpqua River along Stewart Park on Sunday.

A car travels on Oregon Highway 230 between snow laden trees this past weekend. The highway is now closed from Highway 138 near Diamond Lake to the intersection of Highways 230 and 62.

A series of storms hitting Douglas County through Wednesday is expected to keep bringing lots of rain to the valleys and snow to higher elevations.

Areas at higher elevations, such as Tiller and the Interstate 5 passes south of Canyonville, were expected to receive 1 to 3 inches of snow Monday and Tuesday, with snow from that storm tapering off late Tuesday evening, said Marc Spilde, a meteorologist with the National Weather Service in Medford.

There may be icy spots Wednesday morning, but not much precipitation, then another storm system will move into central Douglas County in the late afternoon and evening Wednesday. The snow level from that storm is expected to be around 2,000 feet.

Snow fell briefly at Marvin Hill on Highway 138W on Monday afternoon, and a dusting of snow was on the ground at some times there, as well as at Rice Hill and on Highway 42 at Camas Mountain. On Tuesday morning, there were also light dustings of snow outside of Sutherlin and on Canyon Mountain.

Roseburg can expect rainy and cold weather throughout the week, with highs in the mid-40s and lows in the mid-30s, according to the National Weather Service. Although Roseburg may see some wet snow mixed with rain, the snow is unlikely to stick here, Spilde said.

But the snow level was expected to drop to 1,500 feet and possibly to around 1,000 feet Tuesday. Around 1,000 feet, there could be up to an inch of snow accumulation, Spilde said.

Tuesday morning, Interstate 5 was closed temporarily from milepost 81 near Glendale down to milepost 66 north of Grants Pass.

Some trees were leaning over the road, ODOT said, putting drivers at risk.

ODOT said it doesn’t have an estimate for when the road might reopen.

Monday afternoon, Highway 138E was also closed between milepost 61 near Toketee and milepost 101 near the junction with U.S. Highway 97, and the closure was extended west to milepost 47 at Dry Creek Tuesday morning. Highway 62 was closed from Prospect to the western boundary of Crater Lake National Park.

Those closures were also caused by fallen trees and heavy snow.

The Umpqua National Forest temporarily closed a gate leading to the Umpqua Hot Springs on Friday in anticipation of heavy snowfall over the weekend. If the gate was left open, vehicles might have gotten stuck on the road.

The closed gate is near Toketee, just past the junction of Forest Roads 34 and 3401.

Hot spring visitors will have to hike, ski or snowshoe about 1.5 miles to the trailhead and go up a steep quarter mile of snow-covered trail to access the pools.

It might be a while before the gate to the hot springs is reopened. The snow was coming down hard there Monday morning, and the weather service predicted snow throughout the week.

Whether snow in eastern Oregon is a good or bad thing depends on your point of view, Spilde said.

“For people that are snow lovers and want to go up and do some skiing or go do whatever they like to do, snowmobiling or sledding, it’s welcome,” Spilde said.

Spilde said he headed east to Union Creek over the weekend. He brought two shovels and a bit of melting salt he could have used around his car’s wheels to melt the snow.

“I enjoy the snow. I’m from the East Coast and I really enjoy the big snowstorm every now and again. I know it can cause some big problems around here,” he said.

Travelers heading south to the California border should expect at least a few inches of snow traveling over the Siskiyou Summit.