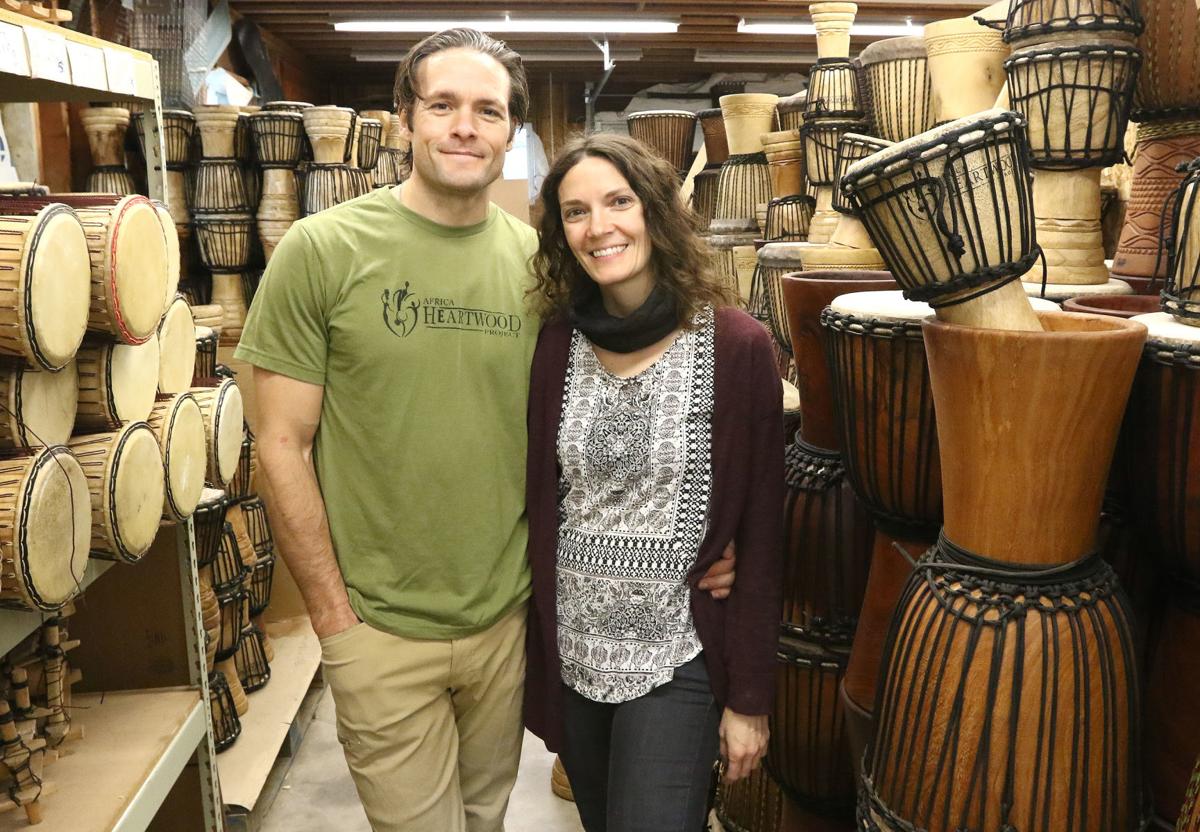 Andy Jones and his wife Kayla Jones stand between handcrafted drums stored at their workshop in Roseburg on Dec. 20. 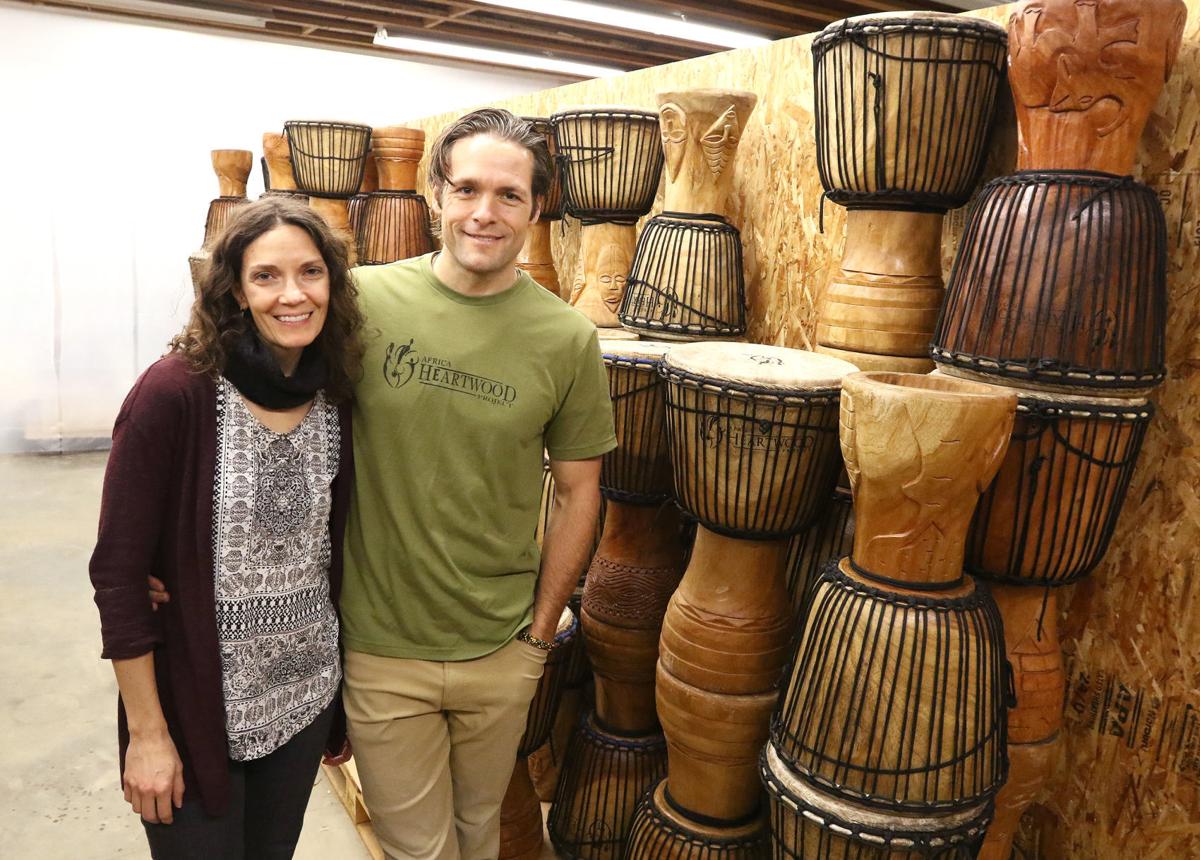 Andy Jones and his wife Kayla Jones stand next to handcrafted drums from Africa stored at their workshop in Roseburg. What began as a way to help an African village’s economy has become a nonprofit operation for the Joneses that they believe is helping make the world a better place. 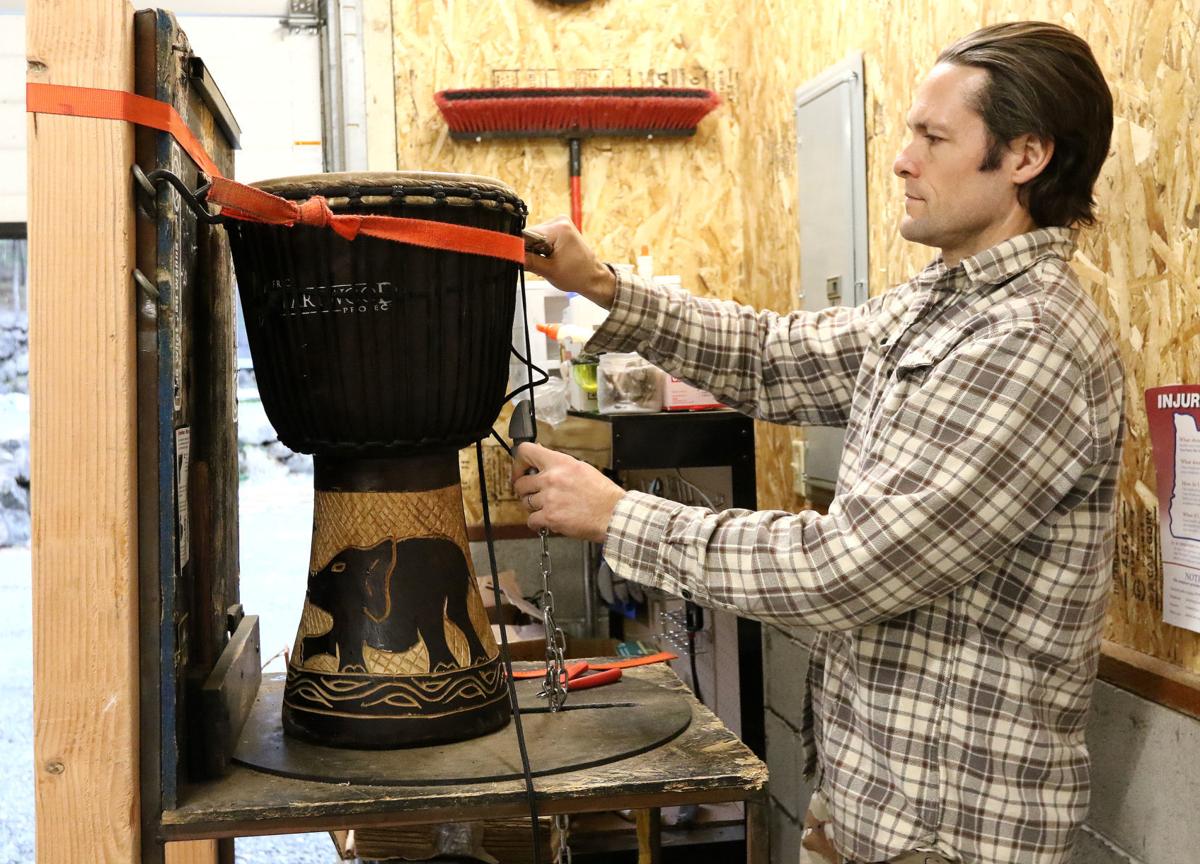 Andy Jones prepares to make adjustments to a drum at his workshop in Roseburg.

Andy Jones and his wife Kayla Jones stand between handcrafted drums stored at their workshop in Roseburg on Dec. 20.

Andy Jones and his wife Kayla Jones stand next to handcrafted drums from Africa stored at their workshop in Roseburg. What began as a way to help an African village’s economy has become a nonprofit operation for the Joneses that they believe is helping make the world a better place.

Andy Jones prepares to make adjustments to a drum at his workshop in Roseburg.

Tucked away in a workshop a few miles west of Roseburg, Andy Jones stores dozens of African drums and other instruments handmade by Africans in an impoverished area of West Africa where Jones does humanitarian work every year.

The money the drum carvers are paid provides a major source of income to the villages.

“I actually got the first drums in 2001 about two years after we had been in Ghana, and the revenue provides sustainable livelihoods for cultural artists,” Jones said. “We did it as a favor, and they kind of started sending more drums, and I thought I can’t stop doing this but this isn’t what I wanted to do,” Jones said.

Nevertheless, that idea became Africa Heartwood, a 501(c)(3) nonprofit and the money raised from that business allowed Jones to start an orphanage in Ghana that was eventually moved to Liberia after the civil war in that country ended.

It’s taken him on an adventure that he never dreamed of.

Jones and his wife, Kayla Jones, were entertainers for several years. They both dance, while Andy Jones also plays the piano, violin and sings. They were headed toward a Broadway career, but life took another direction.

“I sometimes wonder how life would have been different if I’d continued that way,” Jones said.

But when Jones and his wife went to Ghana to work at a refugee camp right after they had been married — yes, they spent their honeymoon working in a refugee camp — their lives changed.

After getting a master’s degree in international education, Jones wanted to work in Africa on education issues at the national level, but just couldn’t get any opportunities to make it happen.

“I got kind of frustrated, I was stuck in this drum business and even though it was doing a good job for a lot of people in Africa, I didn’t like running a business, I don’t enjoy it,” Jones said. “But I do it because there is a purpose in doing so.”

In 2005, Jones felt he needed to go back to Africa and reconnect with the drum carvers, so he and his wife made the trip back and spent a month with the carvers and went to the refugee camp where they had spent their honeymoon.

Their intention was to teach English or music in the school, but when they got there, that changed.

“There was no running water, there were orphans in the street, and just really, really deplorable living conditions,” Jones said. “We felt kind of overwhelmed.”

The couple decided they could help identify orphans. The Liberian civil war was happening and people were running from villages, running from cities and there were boats and buses carrying people out of the country, so kids were being separated from parents and would just end up in Ghana with a hoard of people.

“There were kids who didn’t have families, so we tried to identify orphans,” Jones said. “We tried to raise a little money from home.”

They raised about $1,000 and got some food and enrolled kids in school for the first time.

That’s how they got introduced to Liberians — the war refugees and war orphans.

Jones started an orphanage at the refugee camp in Buduburam, Ghana in 2008 and it was later relocated to the outskirts of Monrovia, the capital of Liberia. Jones has made 21 trips to Africa and the stays have been between two weeks and a year.

When the orphanage was moved to Liberia, the couple found out how much of a challenge the political climate would be to transport young children across country borders.

“Repatriating the refugees from Ghana to Liberia was a huge undertaking and working with United Nations High Commissioner for Refugees and Liberia Refugee Repatriation Resettlement Commission, just to make sure I wouldn’t get any kind of trafficking issues with children going across two country borders, so I had to be real careful,” Jones said.

In 2017, the orphanage was closed because the need had changed. When a child became orphaned, most of the time the child would be absorbed by the community with an aunt or grandmother taking care of the child.

“So I decided that rather than running an orphanage, it would be easier on the children and less expensive to support Liberian women who have taken orphans into their homes who don’t have the money to put them in school,” Jones said.

He has now started doing water projects so he travels once or twice a year to Africa to keep the program moving and has given his organizers in Africa laptops and cellphones so they can communicate with him and the programs can run without him being there.

The water wells not only give the villages clean, safe drinking water but also work as a springboard to more community development, Jones said.

As much good as he has done in the impoverished area of Western Africa, it still leaves a hole in his heart.

“I think I rarely feel satisfied,” he said. “Even the good we try to do, it’s fraught with problems. You can raise a bunch of orphan kids and teach them every principle of self-reliance and being a good person and overnight it can just fall apart.”

That doesn’t mean he will stop, it’s work he feels he has to do.

“Maybe someday I’ll feel satisfaction, but I’m not patting myself on the back,” he said. “I think this is my work to do.”

Now he can spend more time with his family in Roseburg. The couple, who met growing up in Jerome, Idaho, have six kids including two girls that were just adopted and who are still adapting to the American culture. His wife has been a solid supporter from the start, he said.

“She’s been an amazing support,” Jones said. “As I’ve traveled back and forth to Africa, she only went the first time and then 20 years later when we went to live there as a family in the bush, and that was incredibly difficult.”

Jones had his own brush with death when he had lymphoma cancer at age 14. He went through 12 months of chemo treatment and the experience has made him look at life differently.

“Being up close with the possibility of dying, knowing other kids who didn’t survive — I survived,” Jones said. “And I’ve been reading my journal from when I was 14 and 15 years old and I’m saying, ‘I know I must be here for a reason or I’d be dead.’”

For information on the Africa Heartwood Project visit http://www.africaheartwoodproject.org/.