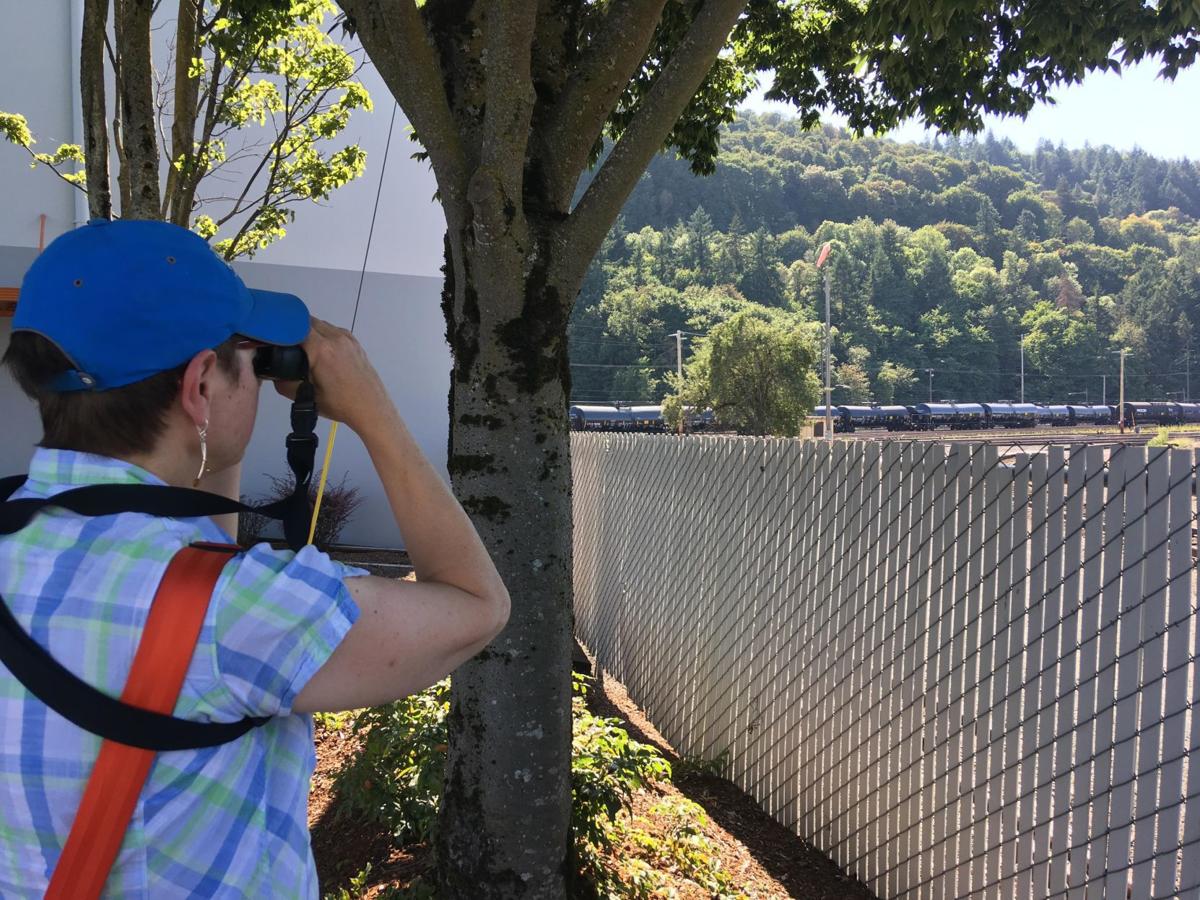 Climate activist Melanie Plaut, who’s part of the group 350PDX, looks through binoculars at a row of tanker cars to determine what they’re carrying. 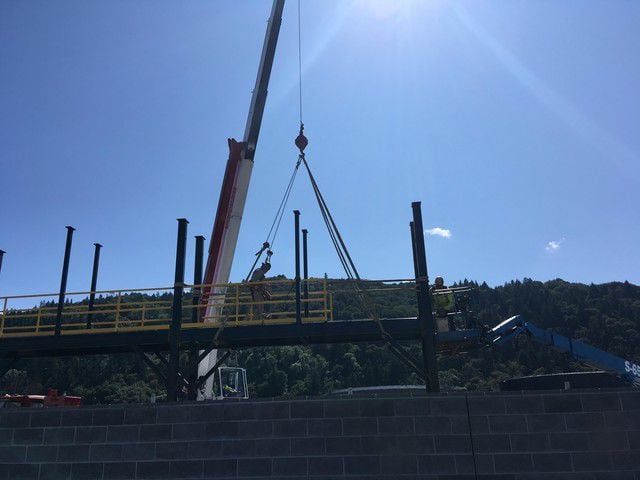 The Zenith Energy oil terminal got city approval in 2014 to upgrade its facility in the northwest industrial area. 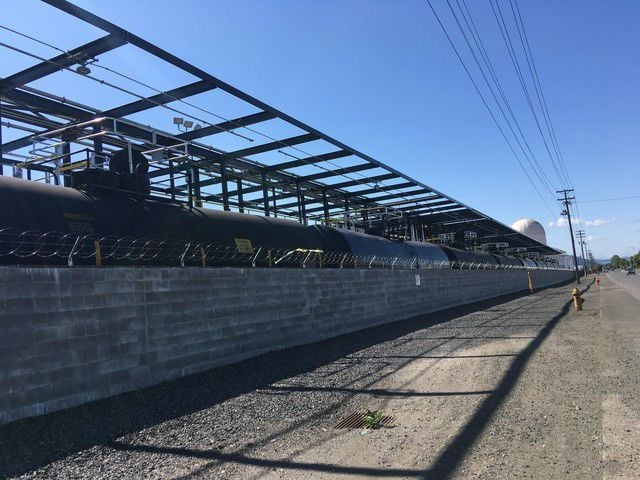 Climate activist Melanie Plaut, who’s part of the group 350PDX, looks through binoculars at a row of tanker cars to determine what they’re carrying.

The Zenith Energy oil terminal got city approval in 2014 to upgrade its facility in the northwest industrial area.

Environmentalists take credit for blocking fossil fuel developments across the Northwest. Numerous companies looking to ship coal, oil and natural gas through Oregon and Washington have given up in the face of endless permitting hurdles and denials.

But opponents may have met their match with a new breed of projects shipping fuel by rail in Oregon.

The Zenith Energy oil terminal and the Columbia Pacific Biorefinery took over existing industrial facilities and didn’t need many permits to start transporting fuel. The companies running these projects don’t need to provide much information to the public about what kind of fuel they’re handling and where it’s going.

That’s what brought climate activist Melanie Plaut to the industrial sector of Northwest Portland. Plaut, who is part of the group 350PDX, was looking through binoculars at a row of tanker cars on the railroad tracks, trying to identify what type of oil they were carrying.

“All crude oil has a red placard with number 1267 on it,” she said. “But if it’s diluted bitumen, it also has a white placard saying ‘inhalation hazard.’”

Her group has been asking people across the Pacific Northwest to report oil train sightings so they can piece together what’s being shipped where.

“Since there’s so little need for public reporting and the government agencies don’t really know, we’ve had to do a lot of crowdsourcing,” she said.

On a recent visit to the Zenith Energy oil terminal, she noticed some new construction taking place and called out to one of the workers, who appeared to be building a new rack for unloading oil trains.

But when Plaut asked the worker what he was building, he said he didn’t know.

There seem to be a lot of unknowns when it comes to the Zenith terminal. The company took over an old asphalt facility that already had the key environmental permits the company needs to receive crude oil from trains and ship it down the Willamette River.

So, it launched its oil shipping operation without a long permitting process.

Plans for a facility upgrade filed with the City of Portland in 2014 suggest the additional racks under construction will allow the company to unload up to 44 oil train cars simultaneously. The added capacity could more than double the number of oil trains running along the Columbia and Willamette rivers. But the company got the city approval it needed two years before city leaders passed an ordinance restricting the expansion of fossil fuel infrastructure.

“They found a loophole,” Plaut said. “This company was able to sneak through, and we suspect this is likely how these things are going to go in the future because the companies know if they go for it straight up, they’re going to lose because of public opinion.”

The project is frustrating to opponents like Plaut who want to reduce the burning of fossil fuel that’s warming up the planet. After a train carrying crude oil derailed and caught fire in the Columbia River Gorge in 2016, more and more people share Plaut’s concerns about the risks of shipping oil by rail.

But without government approvals to challenge, it’s harder to stop this project like they have so many others.

State Regulators AdaptState regulators have been caught off-guard by Zenith’s approach, too.

Scott Smith, an emergency response planner for the Oregon Department of Environmental Quality who works on oil spill cleanup plans, said he had to adapt those plans when Zenith changed the type of oil it was shipping.

In 2017, the company started shipping bitumen, a type of petroleum from Canada’s tar sands that’s thick like peanut butter. But sometime after that, it switched to shipping diluted bitumen, which is mixed with liquids. Smith said the different types of oil behave differently when they’re spilled in water and require different oil spill response plans.

“We’ve had to look at their safety data sheet and change it several times based on the new products that they’re transferring,” Smith said.

Smith said the oil Zenith is handling now has heavy components that would sink in a spill. The oil also emits hazardous vapors that would pose an inhalation risk to oil spill cleanup workers.

“And that is kind of new for our region,” he said. “We haven’t previously prepared for that and that’s part of the reason that we’ve had to take a very close look at them over the past year or two.”

Zenith also unexpectedly switched the kind of fuel it was using for a training drill involving the company and first responders, Smith noted. The company was supposed to use crude oil in the drill. But instead it used diesel – a switch that made the training drill less valuable in preparing responders to an actual crude oil spill. Zenith has also been warned by DEQ about unresolved safety issues.

Zenith declined a recorded interview request but has sent written responses to OPB’s questions saying the company is following the rules and doesn’t believe it has misled the public.

Zenith spokesman Daniel Wattenburger said the facility upgrades that have required visible construction at the Portland terminal do not constitute a fossil fuel infrastructure expansion, and the company can only provide basic information about the crude oil it is handling from Alberta, Canada.

“All of our customer agreements contain confidentiality provisions,” he said in a written response. “We don’t have information as to the identity of our customers, producers or suppliers.”

Another Terminal Raises ConcernsA lack of trust in Zenith has also raised suspicions about other fuel terminals, including the Columbia Pacific Biorefinery near Clatskanie.

According to Catie Kerns, a spokeswoman for biorefinery owner Global Partners, the facility is currently transporting ethanol, and it hasn’t shipped crude oil since 2015. But opponents are worried the company could do so in the future.

“I think that folks that have that concern aren’t talking to us and they aren’t listening to what were our actual plans for the facility,” Kerns said. “And while we do have permits to transload crude oil, I can say that’s not currently in our plans. And if it were to occur, then we would be having conversations with the community and hearing their concerns.”

She said her company’s future plans are focused on biofuels, not crude oil. Meanwhile, Wattenburger with Zenith Energy said his company wants 30 percent of its Portland terminal capacity to be focused on renewables by the end of next year.

But the city of Portland denied his company a key permit for those plans, citing its ordinance restricting fossil fuel facilities. Now Zenith is threatening to sue the city.

Dan Serres with the environmental group Columbia Riverkeeper said Global Partners took a similar approach to Zenith in converting an existing ethanol refinery into a crude oil terminal in 2014. Oregon regulators have just a few checks on these types of facilities through oil spill cleanup plans and air and water pollution permits.

“It is a real challenge, and Oregon has not caught up to the challenge,” Serres said. “For what seems like one of the riskiest types of terminal we see in the region, we have essentially very little in the way of tangible regulatory tools to deal with it.”

In contrast, Washington and California both have their own state environmental policy acts that require more extensive environmental reviews. Serres said that was why the Tesoro Savage oil terminal proposed at the Port of Vancouver was ultimately denied the permits it needed to operate.

Oregon DEQ will soon be considering new air pollution permits for both the Zenith Energy terminal and the Columbia Pacific Biorefinery, but Serres said those reviews don’t consider many of the safety and environmental issues involved in shipping oil by rail.

“This sort of haphazard process has really led to alarm in the community because what we see is oil trains rolling through Portland and potentially more of them coming,” Serres said. “We should have a public process and public hearings and look at all the risks, not just these relatively narrow issues that are associated with an air pollution permit.”