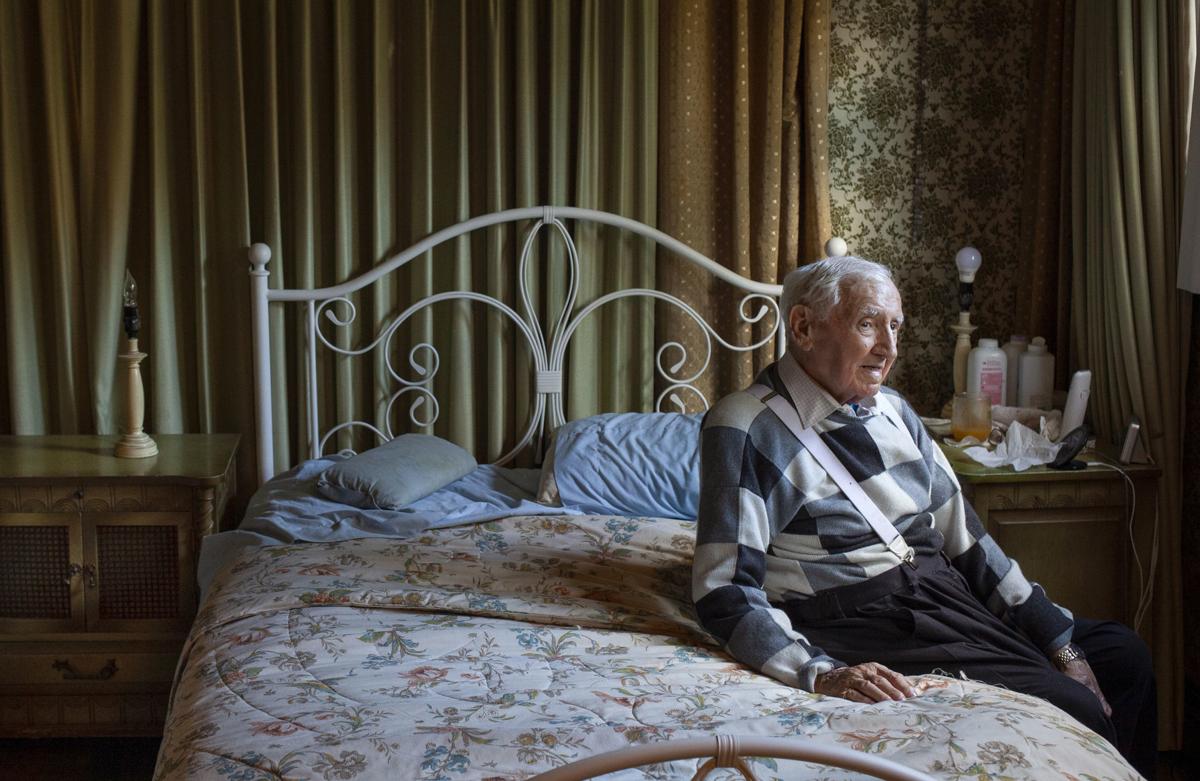 David Wisnia, an Auschwitz survivor who became an 101st Airborne trooper, at his home in Levittown, Pennsylvania, back in November. Two former lovers in Auschwitz, Wisnia and Helen Spitzer, were reunited 72 years later and he had one question: Was she the reason he was alive today? 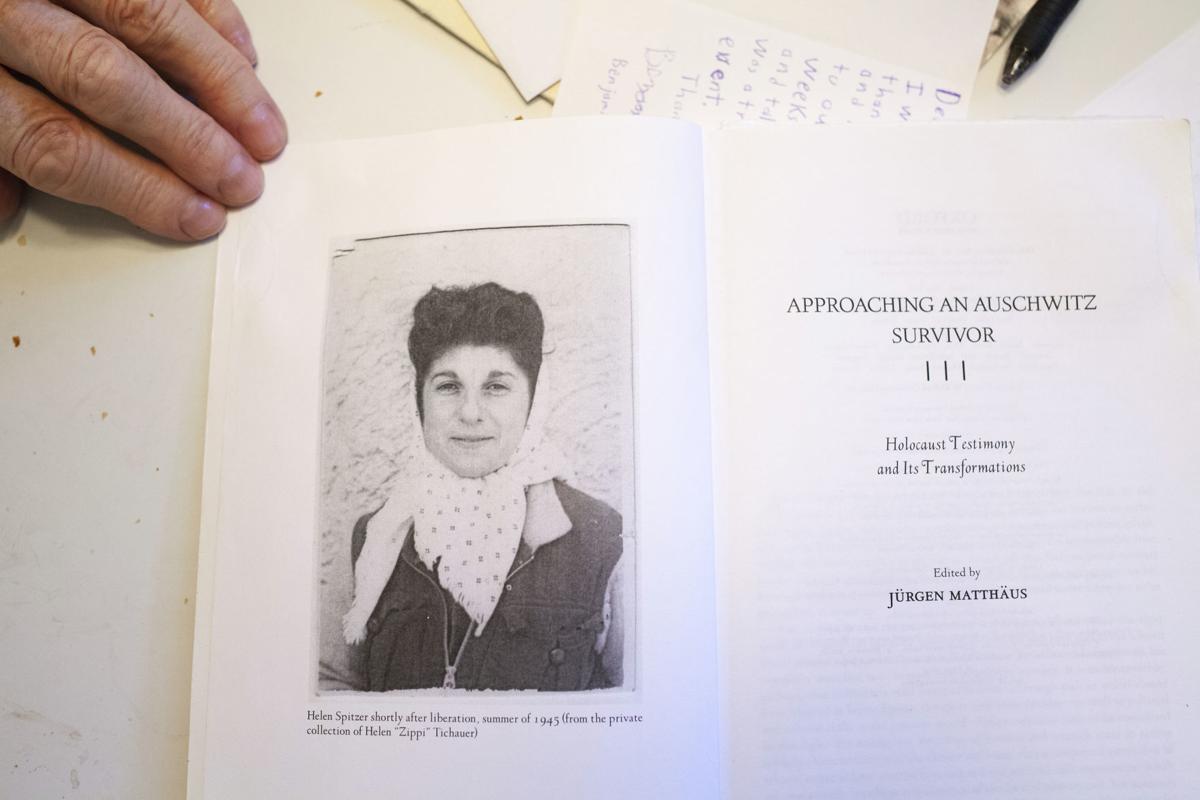 David Wisnia, an Auschwitz survivor, holds a copy of the book devoted to interviews with fellow Auschwitz survivor and former lover, Helen Spitzer, the woman he knew as “Zippi,” at his home in Levittown, Pennsylvania, back in November. 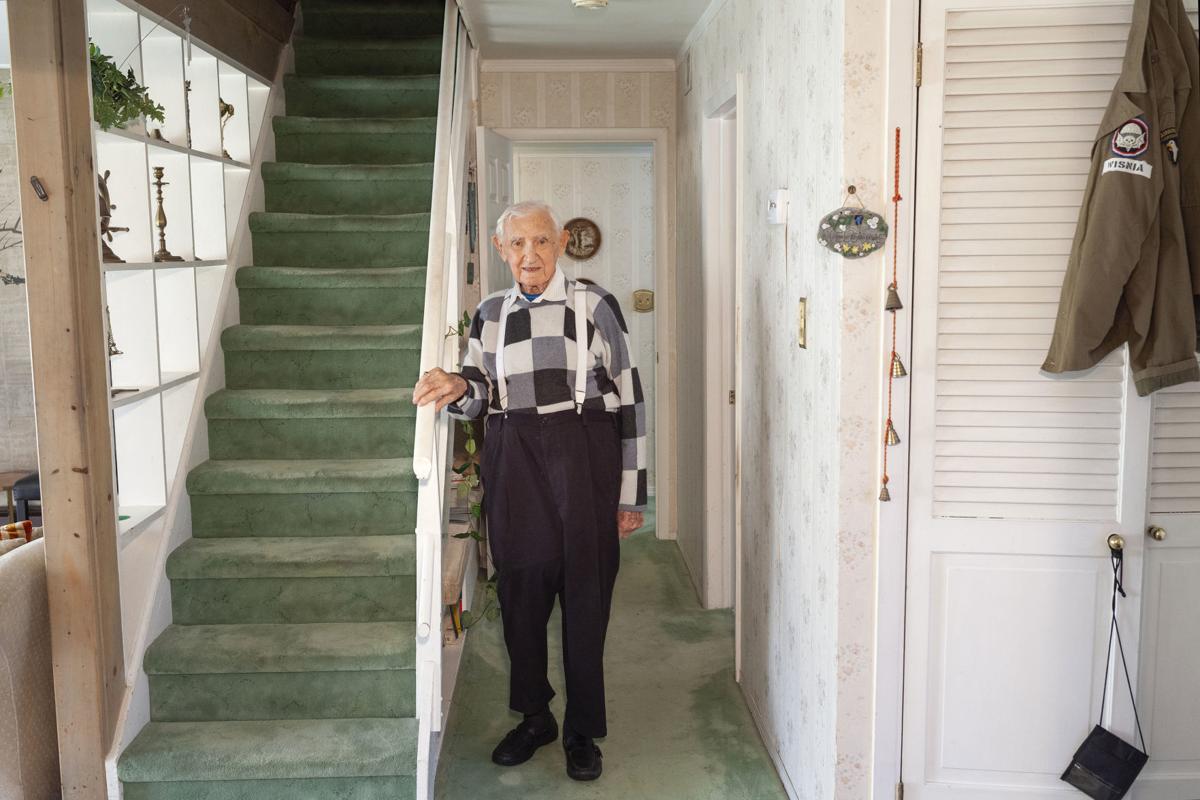 David Wisnia, an Auschwitz survivor who became an 101st Airborne trooper, at his home in Levittown, Pennsylvania. 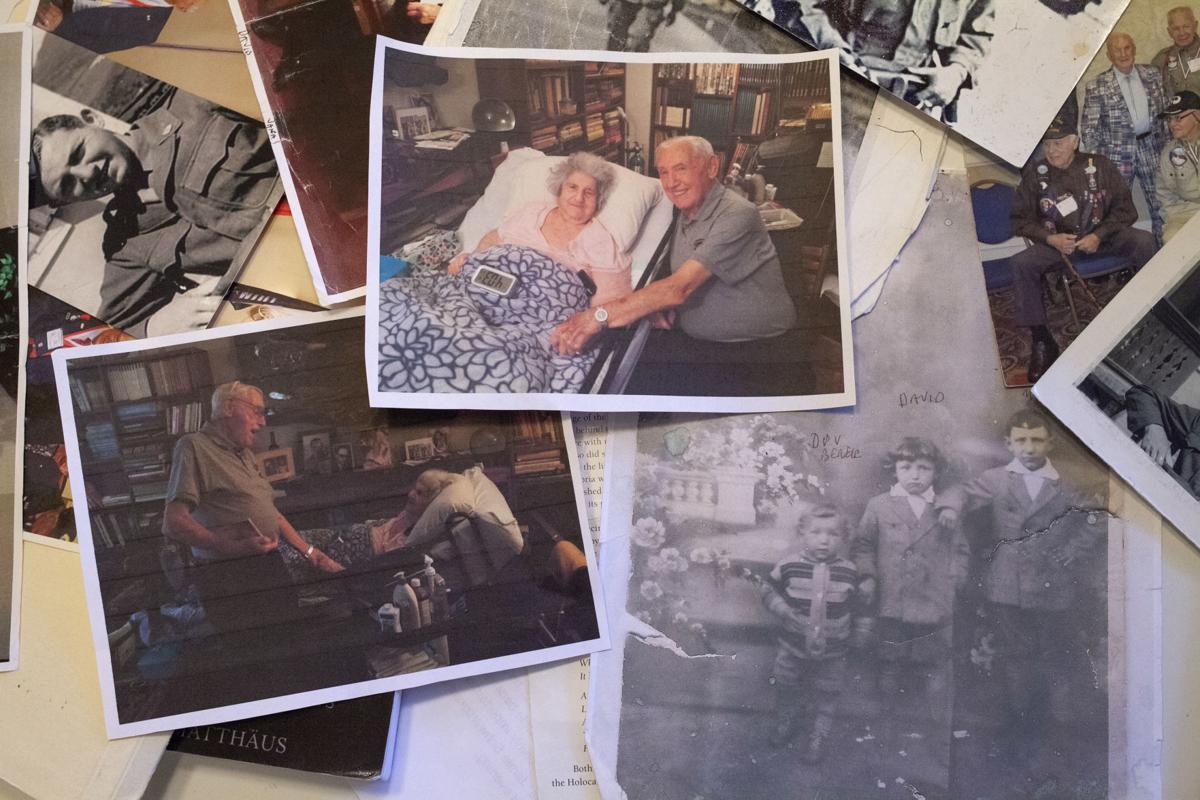 Various photographs of David Wisnia, an Auschwitz survivor, including some of his reunion with Helen Spitzer, a former lover, 72 years later, at his home in Levittown, Pennsylvaina, this past month.

David Wisnia, an Auschwitz survivor who became an 101st Airborne trooper, at his home in Levittown, Pennsylvania, back in November. Two former lovers in Auschwitz, Wisnia and Helen Spitzer, were reunited 72 years later and he had one question: Was she the reason he was alive today?

David Wisnia, an Auschwitz survivor, holds a copy of the book devoted to interviews with fellow Auschwitz survivor and former lover, Helen Spitzer, the woman he knew as “Zippi,” at his home in Levittown, Pennsylvania, back in November.

David Wisnia, an Auschwitz survivor who became an 101st Airborne trooper, at his home in Levittown, Pennsylvania.

Various photographs of David Wisnia, an Auschwitz survivor, including some of his reunion with Helen Spitzer, a former lover, 72 years later, at his home in Levittown, Pennsylvaina, this past month.

The first time he spoke to her, in 1943, by the Auschwitz crematory, David Wisnia realized that Helen Spitzer was no regular inmate. Zippi, as she was known, was clean, always neat. She wore a jacket and smelled good. They were introduced by a fellow inmate, at her request.

Her presence was unusual in itself: a woman outside the women’s quarters, speaking with a male prisoner. Before Wisnia knew it, they were alone, all the prisoners around them gone. This wasn’t a coincidence, he later realized. They made a plan to meet again in a week.

On their set date, Wisnia went as planned to meet at the barracks between crematories 4 and 5. He climbed on top of a makeshift ladder made up of packages of prisoners’ clothing. Spitzer had arranged it, a space amid hundreds of piles, just large enough to fit the two of them. Wisnia was 17 years old; she was 25.

They were both Jewish inmates in Auschwitz, both privileged prisoners. Wisnia, initially forced to collect the bodies of prisoners who committed suicide, had been chosen to entertain his Nazi captors when they discovered he was a talented singer.

Spitzer held the more high-powered position: She was the camp’s graphic designer. They became lovers, meeting in their nook at a prescribed time about once a month. After the initial fears of knowing they were putting their lives in danger, they began to look forward to their dates. Wisnia felt special. “She chose me,” he recalled.

For a few months, they managed to be each other’s escape, but they knew these visits wouldn’t last. Around them, death was everywhere. Still, the lovers planned a life together, a future outside of Auschwitz. They knew they would be separated, but they had a plan, after the fighting was done, to reunite.

On a recent afternoon this fall, Wisnia sat in his house of 67 years in his adopted hometown in Levittown, Pennsylvania, looking through old photographs. Still a passionate singer, Wisnia spent decades as a cantor at the local congregation. Now, about once a month, he gives speeches where he tells war stories, usually to students and sometimes at libraries or congregations.

“There are few people left who know the details,” he said.

Spitzer was among the first Jewish women to arrive in Auschwitz in March of 1942. Through her ability to speak German, graphic design skills and sheer luck, Spitzer secured an office job.

As Spitzer’s responsibilities grew, she was free to move around within parts of the camp and sometimes was allowed excursions. Yet Spitzer was never a Nazi collaborator or a kapo, a Jew assigned to oversee other prisoners. Instead, she used her position to help inmates and allies.

Wisnia was assigned to the “corpse unit” when he arrived. But within months word got around that Wisnia was a gifted singer. He started singing regularly to Nazi guards and was assigned a new job at a building the SS called the Sauna. He disinfected the clothing of new arrivals with the same Zyklon B pellets used to murder prisoners in the gas chamber.

Spitzer, who had noticed Wisnia at the Sauna, began making special visits. Their relationship lasted several months. One afternoon in 1944 they realized it would probably be their final climb up to their nook. The Nazis were transporting the last of the camp prisoners on death marches and destroying evidence of their crimes.

During their last rendezvous they made a plan. They would meet in Warsaw when the war was over, at a community center. It was a promise.

Wisnia left before Spitzer on one of the last transports out of Auschwitz. He was transferred to the Dachau concentration camp in December 1944. Soon after, during a death march from Dachau, he happened upon a hand shovel. He struck an SS guard and ran. The next day, while hiding in a barn, he heard what he thought were Soviet troops approaching. He ran to the tanks and hoped for the best. It turned out to be Americans.

Even though, as a Pole, he never could become a full-fledged GI, Wisnia performed numerous jobs after the war with the American Army. He worked at the Army Post Exchange, which provided basic supplies to soldiers. Once he’d joined the Americans, his plan to meet Zippi in Warsaw was no longer even a consideration. America was his future.

Spitzer was among the last to leave the camp alive. She was sent to the women’s camp at Ravensbrück and a sub-camp in Malchow before being evacuated in a death march. She and a friend escaped the march by removing the red stripe she had painted on their uniforms, allowing them to blend with the local population that was fleeing.

Amid the chaos, Spitzer made it to the first all-Jewish displaced persons camp in the American zone of occupied Germany, which in the spring of 1945 housed at least 4,000 survivors.

Soon after, Spitzer married Erwin Tichauer, that camp’s acting police chief. Once again, Spitzer, now known as Tichauer, was in a privileged position. Although they, too, were displaced persons, the Tichauers lived outside the camp.

Eventually, the Tichauers moved to America, first to Austin, Texas, and in 1967 they settled in New York, where Tichauer became a bioengineering professor at New York University.

Sometime after the war ended, Wisnia heard from a former Auschwitz inmate that Tichauer was alive. By then he was deeply enmeshed with the American Army, based in Versailles, where he waited until he could finally emigrate to the United States.

When his aunt and uncle picked him up at the port in Hoboken on February 1946, they couldn’t believe the 19-year-old in a GI uniform was the little David they last saw in Warsaw.

In a rush to make up for lost time, Wisnia plunged into New York City life, going to dances and parties. In 1947, at a wedding, he met his future wife, Hope.

Over the years, Wisnia kept tabs on Tichauer through a mutual friend. Meanwhile, his family grew — he had four children and six grandchildren. In 2016 Wisnia decided to try to reach out to Zippi. He’d shared the story with his family. His son, who was now a rabbi at Reform synagogue in Princeton, New Jersey, initiated contact for him. Finally, she agreed to a visit.

It had been 72 years since he’d last seen his former girlfriend. He’d heard she was in poor health but knew very little about her life. He suspected she’d helped to keep him alive and wanted to know if this was true.

When Wisnia and his grandchildren arrived at her apartment in Manhattan, they saw Tichauer lying in a hospital bed, surrounded by shelves filled with books. She had been alone since her husband died in 1996, and they never had any children. Over the years, bed-bound, she’d gone increasingly blind and deaf.

At first, she didn’t recognize him. Then Wisnia leaned in close.

“Her eyes went wide, almost like life came back to her,” said Wisnia’s grandson Avi Wisnia, 37. “It took us all aback.”

The reunion lasted about two hours. He finally had to ask: Did she have something to do with the fact that he’d managed to survive in Auschwitz all that time?

She held up her hand to display five fingers. Her voice was loud, her Slovakian accent deep. “I saved you five times from bad shipment,” she said.

“I knew she would do that,” Wisnia said to his grandchildren. “It’s absolutely amazing. Amazing.”

There was more. “I was waiting for you,” Tichauer said. Wisnia was taken aback. After she escaped the death march, she had waited for him in Warsaw. She’d followed the plan. But he never came.

Wisnia and Tichauer never saw each other again. She died last year at age 100. On their last afternoon together, before Wisnia left her apartment, she asked him to sing to her. He took her hand and sang her the Hungarian song she taught him in Auschwitz. He wanted to show her that he remembered the words.