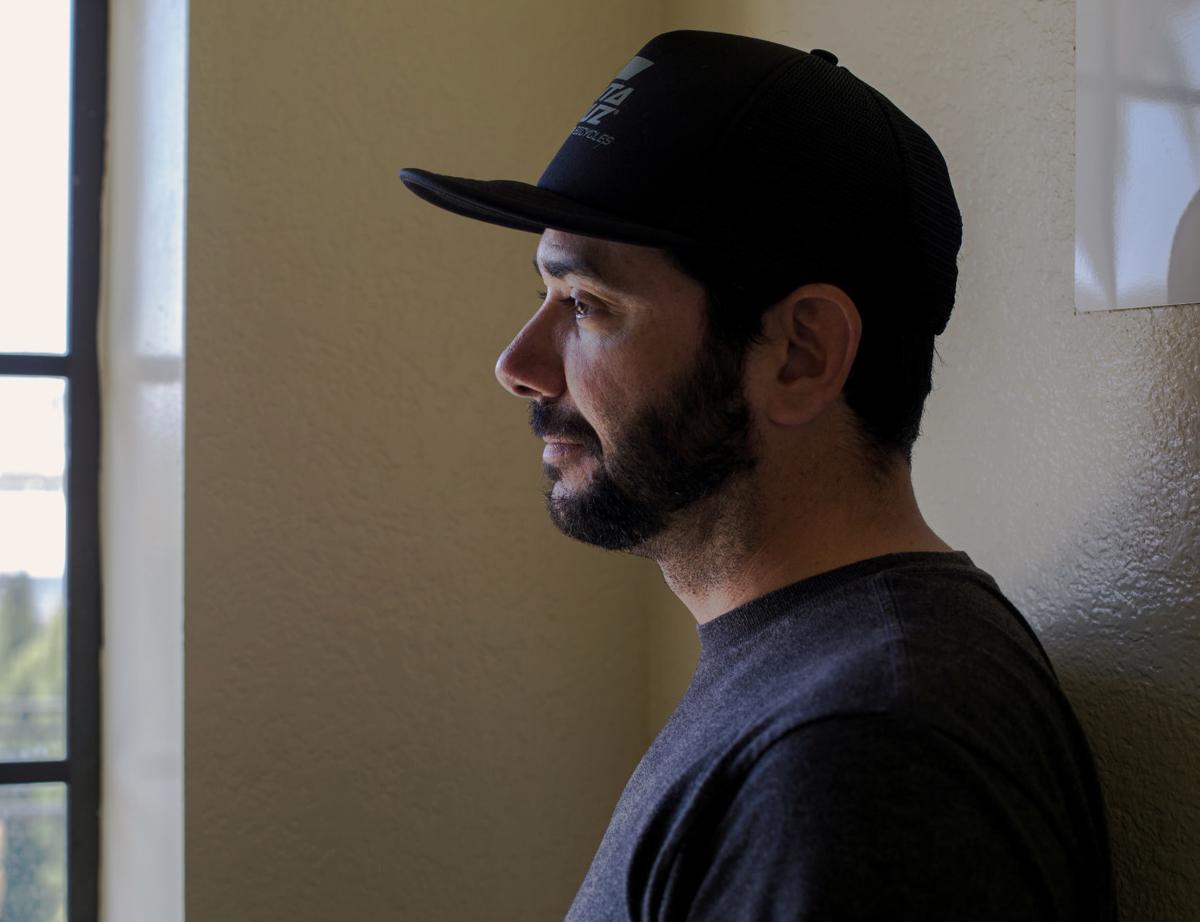 Albert Paul Cruz near his home in San Pedro, California, on June 27. Education Secretary Betsy DeVos is denying huge batches of relief requests from students whose schools defrauded them and even those who aren’t denied are getting very little, or nothing. 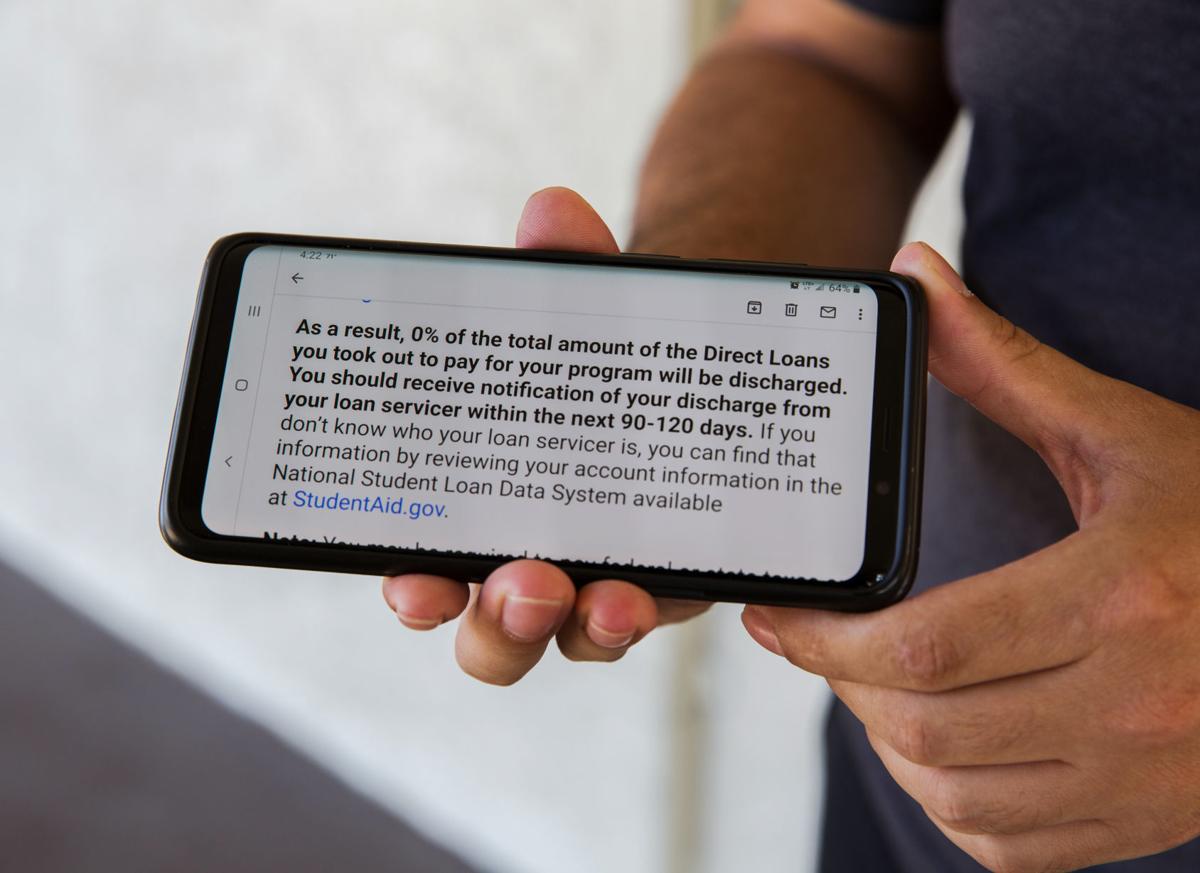 Albert Paul Cruz shows an email from his borrower defense application, showing that he gets 0% of his students loans discharged. 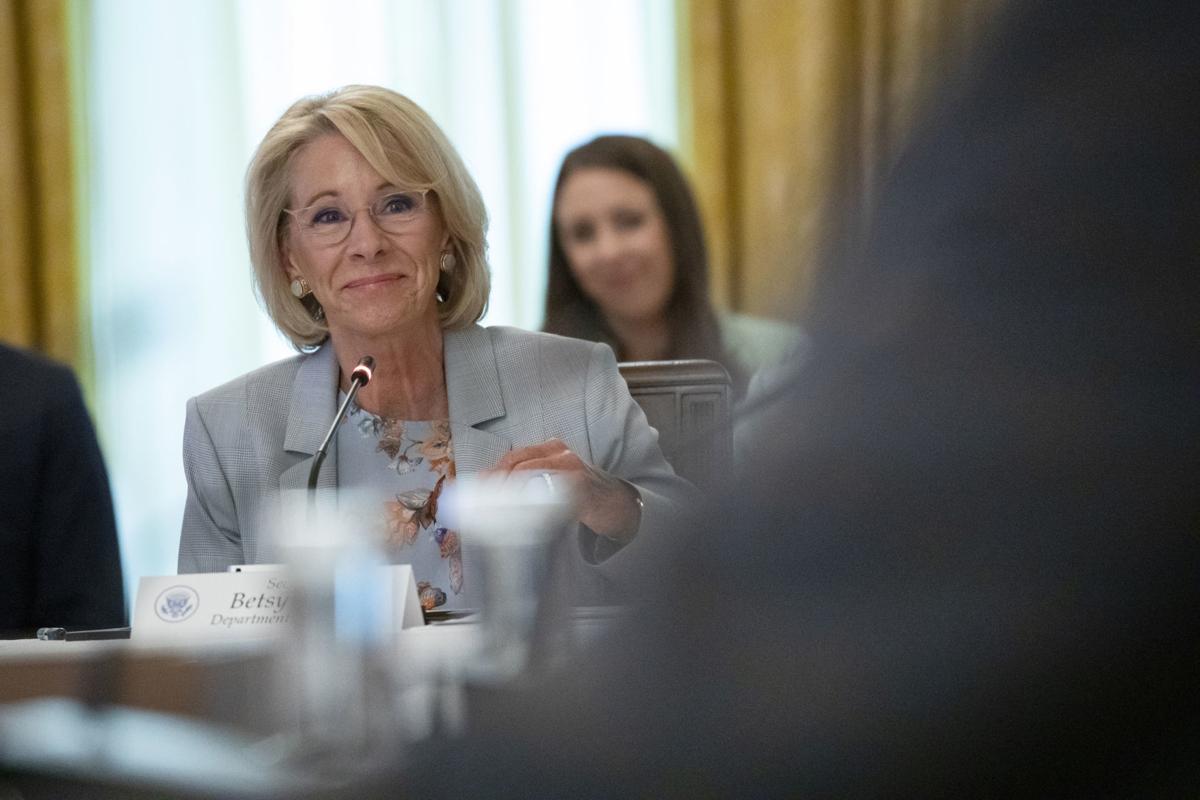 Education Secretary Betsy DeVos at the White House in Washington on June 26. DeVos is denying huge batches of relief requests from students whose schools defrauded them.

Albert Paul Cruz near his home in San Pedro, California, on June 27. Education Secretary Betsy DeVos is denying huge batches of relief requests from students whose schools defrauded them and even those who aren’t denied are getting very little, or nothing.

Albert Paul Cruz shows an email from his borrower defense application, showing that he gets 0% of his students loans discharged.

Education Secretary Betsy DeVos at the White House in Washington on June 26. DeVos is denying huge batches of relief requests from students whose schools defrauded them.

When Albert Paul Cruz opened a letter from the Education Department last month, he saw the words he’d been waiting for: “We approved your claim.” The government finally agreed that he’d been defrauded by ITT Technical Institute, the defunct for-profit chain where he’d racked up almost $60,000 in student loans getting what he considers a worthless degree.

Then he scrolled to the next page and saw how much of that debt would be forgiven: zero. The department, the letter said, had concluded he suffered no financial harm.

“You’re acknowledging the school defrauded its students and claiming that didn’t hurt us?” said Cruz, who earned an associate degree in computer networking systems in 2010 but never worked in that field. “How is that even possible?”

The approval of claims without financial relief is the latest twist in longstanding efforts by defrauded borrowers to get help from the federal government through a program meant to assist former students whose schools offered sham degrees and empty promises.

Years of delays and attempts to cut the relief borrowers can receive have prompted dozens of lawsuits against the department. Now, under pressure from federal courts to deal with hundreds of thousands of unresolved claims, the Education Department is processing them — and saying no. More than 45,000 rejection notices have been sent in recent months, according to agency data.

And when the department is legally obligated to approve a claim, it is often granting only minuscule relief — or none at all.

“Borrowers can’t win,” said Eileen Connor, the legal director of the Project on Predatory Student Lending, a group that has represented borrowers in multiple cases against the department, including one filed last month that challenges the agency’s partial-relief approach. “To tell even borrowers who can prove they were defrauded by their school that they still get no relief is absurd and cruel.”

Education Secretary Betsy DeVos has long refused to take part in the program, which she once called a “free money” giveaway. Last year, she said the program was a “mess” when she took over, and added that a new methodology for calculating relief — including granting none on many approved claims — “treats students fairly and ensures that taxpayers who did not go to college or who faithfully paid off their student loans do not shoulder student loan costs for those who didn’t suffer harm.”

Angela Morabito, a spokeswoman for the Education Department, said Friday that the agency was “faithfully implementing” the existing rules for the program and that the law “requires no relief in some circumstances.”

The department’s formula for relief uses a complicated sliding scale on which defrauded students’ debt reduction is calculated using group earnings data. For former ITT students, the agency’s calculations call for no relief for students in a majority of the school’s programs.

Morabito said that DeVos had “developed a scientifically sound method to evaluate and process claims.”

DeVos has long opposed the relief program, called Borrower Defense to Repayment, which allows students to have their federal student loan debts eliminated if their schools acted fraudulently. The decades-old provision was little used until five years ago, when a coordinated state and federal crackdown toppled big chains including ITT and Corinthian Colleges. Millions of former students were left with large debts for useless degrees from bankrupt schools or credits other institutions wouldn’t accept.

The education secretary at the time, Arne Duncan, promised to forgive the debts of students at Corinthian, and said more relief would follow. “This is our first major action on this, but obviously it won’t be the last,” he said in 2015. About 30,000 applicants received relief in the waning days of the Obama administration.

But DeVos has gone to great lengths to block other requests.

Her department processed no claims for more than a year. A judge found that it had illegally delayed rules that were written under the last administration to simplify and speed up claims. Another judge found the department had broken a federal privacy law by obtaining borrowers’ income information as it tried to justify forgiving less of their debt.

When forced to discharge certain loans, DeVos added a handwritten note to the form granting the request, saying she approved it “with extreme displeasure.” And in October, a federal judge held her in contempt for improperly billing 45,000 former Corinthian students after being ordered to stop collecting on their debts.

It was one of several high-profile losses for the department: One ruling last month ordered DeVos to fully wipe out the loans of 7,200 former Corinthian students. But judges have usually ordered her to process claims that have languished for as long as four years — although not necessarily approve them or grant them relief.

Cruz, who works as a prototype technician for an automaker, was one of more than 10,000 former students at ITT, which collapsed in 2016, who sought to use the borrower defense provision. Education Department officials concluded in a 2017 memo that ITT had engaged in “flagrant” and “pervasive” fraud, and they recommended that eligible borrowers receive “full relief.”

The department had decided before DeVos’ arrival to approve claims from some of those borrowers, including Cruz, as well as students who had attended certain campuses run by ITT and American Career Institute, a trade school that admitted it falsified records and deceived students.

But she overruled the full-relief recommendation and interpreted the department’s prior decisions to the letter: The ITT decision applied specifically to those who attended the school’s campuses in California, but was intended as a model for requests from other states. DeVos has not extended it to ITT students elsewhere.

So those students are being rejected, along with those from several other chains — including the University of Phoenix, which the Federal Trade Commission recently punished for making fraudulent claims.

More than a dozen recent denial notices reviewed by The New York Times range from incomplete to opaque. A line in one reads, “We considered evidence gathered from the following sources: [INSERT BULLETTED LIST AND FORMAT BEFORE SENDING].” Another notice told the borrower that the claim “fails for the following reason(s): Other.”

But the response received by David Boyer, a former ITT student, is more typical. It included a long list of evidence the agency said it had considered, including submissions by the Consumer Financial Protection Bureau, ITT’s accreditor, the advocacy group Veterans Education Success, and the attorneys general of Iowa, Massachusetts and New Mexico.

The department rejected Boyer’s claims, citing “insufficient evidence.” (Respondents can ask for a reconsideration, but several lawyers said they had never seen such a request succeed.)

DeVos’ time at the Education Department is most likely winding down: She has told agency employees that she does not intend to stay on if President Donald Trump is reelected, according to two employees who spoke on the condition of anonymity.

But her curtailing of the borrower-defense system will outlast her tenure. This month, new agency rules sharply limiting new claims took effect, even after a rare bipartisan effort in Congress to prevent it. Trump vetoed the bill — his first domestic-policy veto — and lawmakers couldn’t override him.

The agency’s stonewalling has infuriated members of Congress, including Rep. Robert C. Scott, D-Va., chairman of the House Education Committee. The committee recently released a 30-page report that concluded that the department’s methodology for granting relief was so restrictive that it was mathematically impossible for many borrowers to have their loans fully eliminated.

The borrower-defense system “is a valuable tool to give victims of fraud a second chance at a quality education,” Scott said. “Instead of using its authority to make defrauded borrowers whole, the department delayed and denied relief for hundreds of thousands of people.”

A second chance is what Boyer wants. A Navy veteran, he used the GI Bill to attend ITT — one of the for-profit schools that specifically sought out veterans because of their lucrative education benefits.

Boyer received a bachelor’s degree in applied science and electrical engineering that was all but worthless. ITT’s reputation was so bad that several potential employers rejected him once they realized where his degree was from, he said. He ended up taking its name off his résumé.

“All of us struggled to even make minimum wage,” Boyer said. After graduation he took a job fixing soda machines and microwaves in convenience stores.

An accepted borrower-defense claim would have restored his GI Bill benefits. Boyer, 52, who lives in Potosi, Missouri, and now works as a trade-school teacher, said that if he regained those benefits he would again pursue higher education.

“I’d like to have a degree that means something,” he said.