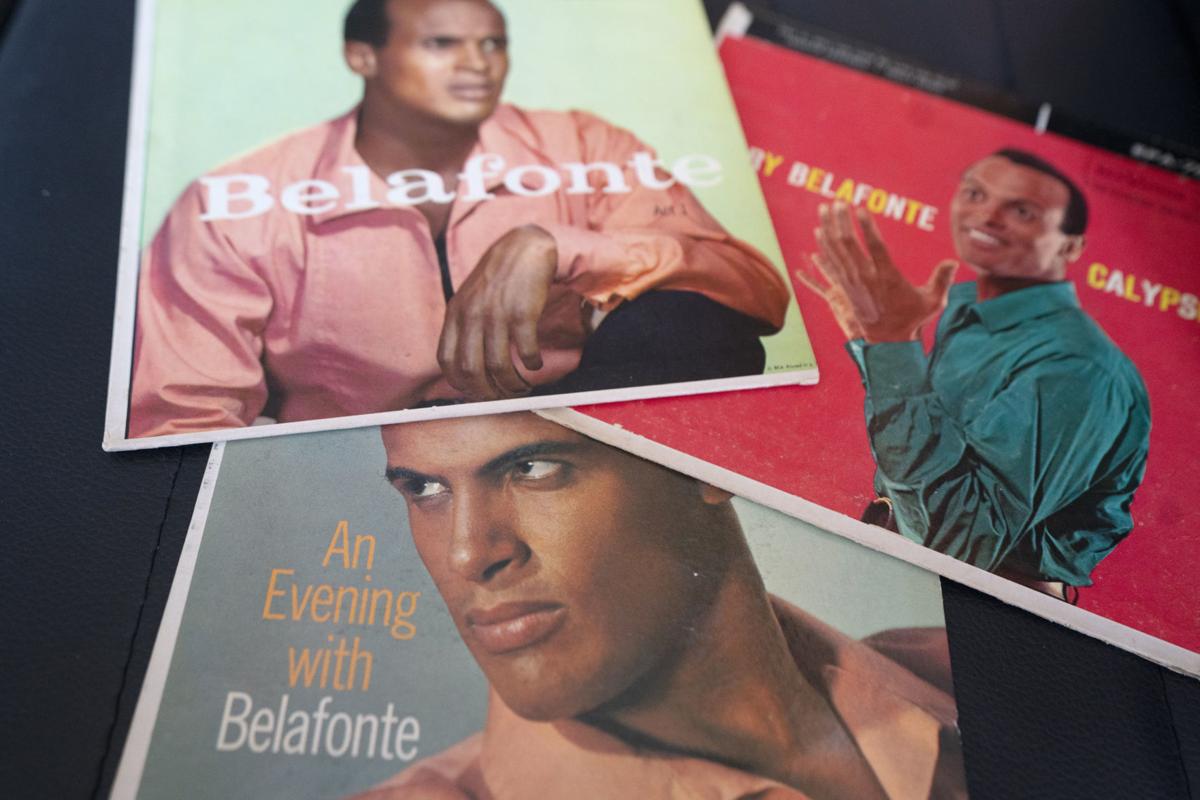 Album covers that are part of the vast archive of Harry Belafonte, which have been acquired by the Schomburg Center for Research in Black Culture, in New York. 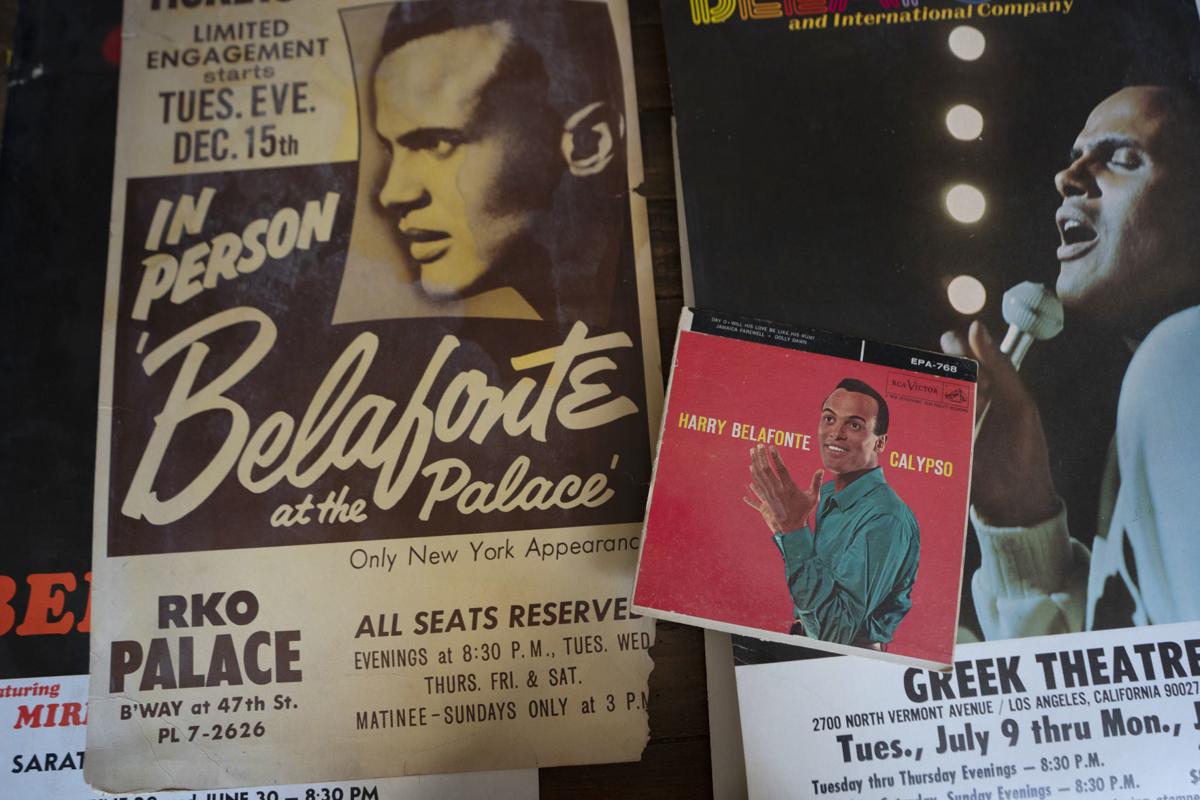 Materials that are part of the vast archive of Harry Belafonte, which have been acquired by the Schomburg Center for Research in Black Culture, in New York, Feb. 21, 2020. The vast maze of photographs, recordings, films, letters, artwork, clipping albums and other materials illuminates not just his career as an musician and actor, but as an activist and connector who seemed to know everyone, from Paul Robeson and Marlon Brando to Martin Luther King Jr., the Kennedys and Nelson Mandela. (James Estrin/The New York Times)

Album covers that are part of the vast archive of Harry Belafonte, which have been acquired by the Schomburg Center for Research in Black Culture, in New York.

Materials that are part of the vast archive of Harry Belafonte, which have been acquired by the Schomburg Center for Research in Black Culture, in New York, Feb. 21, 2020. The vast maze of photographs, recordings, films, letters, artwork, clipping albums and other materials illuminates not just his career as an musician and actor, but as an activist and connector who seemed to know everyone, from Paul Robeson and Marlon Brando to Martin Luther King Jr., the Kennedys and Nelson Mandela. (James Estrin/The New York Times)

When Harry Belafonte turned 93 on March 1, he celebrated with a tribute at the Apollo Theater in Harlem, New York, which ended with a thunderous audience singalong to a riff on his star-making 1956 hit, “The Banana Boat Song,” complete with rapper Doug E. Fresh beatboxing over its famous “Day-O!” refrain.

It was a fitting salute at a building that Belafonte, in his 2011 memoir, called a “cathedral of spirituality.” But, just a few blocks uptown, he is receiving a quieter but no less momentous celebration.

The Schomburg Center for Research in Black Culture, a division of the New York Public Library, has acquired Belafonte’s personal archive — a vast maze of photographs, recordings, films, letters, artwork, clipping albums and other materials. It illuminates not just his career as a musician and actor, but as an activist and connector who seemed to know everyone, from Paul Robeson and Marlon Brando to Martin Luther King Jr., the Kennedys and Nelson Mandela.

“Bigger is not always better, but in this case it is,” Kevin Young, director of the Schomburg, said in an interview last month in Belafonte’s office, where the last bits of the archive — which measures about 400 linear feet — were being boxed up.

“Everything you touch has a story and tells a story,” Young continued. “And it’s a story not just about Belafonte, but about black history, black activism and black arts, all of which he’s central to.”

Belafonte has been around so long, and done so much, it can be easy to forget half of it. He was the first solo singer to have a million-selling album (“Calypso,” from 1956) and the first African American to win an Emmy (for “Tonight With Belafonte,” in 1959). Magnetically handsome and charismatic, he was the first black “matinee idol,” as Look magazine once put it, “in our entertainment history.”

He was also a stalwart of the civil rights movement who seems to have helped organize or fund just about everything, including Freedom Summer, the Student Nonviolent Coordinating Committee, the 1963 March on Washington, the cultural boycott of apartheid-era South Africa and the 1985 charity fundraiser megahit “We Are the World.”

The sale of the archive is a homecoming of sorts for Belafonte, who got his introduction to theater (and later, his first professional role) at the American Negro Theater, which began life in the basement of the Schomburg.

In 1946, he was 19 and fresh out of the Navy, working as a janitor’s assistant, when an actress whose window blinds he installed gave him a ticket as a tip.

“I didn’t want a theater ticket; I wanted $5,” Belafonte recalled in a telephone interview earlier this week, in his famous rasp. “But once I stepped in that space, I never looked back.”

His sprawling office suite atop the Times Square headquarters of SEIU 1199, the health care workers union, shows just how far he’s traveled since.

Every wall and table is covered with photographs, gold records, awards plaques, art and posters from his many movies. The man himself was not there the day of Young’s visit, but an open door gave a glimpse of his small private office, with photographs of Mandela and King over a chair upholstered in West African cloth, along with 19th-century political cartoons and a poster for Paul Robeson’s 1936 film “Song of Freedom.”

His huge audiovisual collection — including master tapes, live sets, demos, and impromptu home movies and recordings — sits in a warehouse. Young was at the office with James Goldwasser, the book dealer who prepared the archive for sale with literary agent Chris Calhoun, to offer a glimpse of some highlights of the paper archive, much of which has been hidden away in boxes for decades.

(The library is not disclosing the terms of the acquisition, which was made with support from a consortium including the Ford Foundation, the Mellon Foundation and the Open Society Foundation.)

Goldwasser wove past mountains of boxes to sort through albums of rare calypso records from the 1950s. In another room, he opened a huge file drawer crammed with scripts for projects both produced and unproduced — “a capsule history of black film,” Young said — and started pulling things out at random.

There was a script for “Beat Street” (1984), one of the first Hollywood popularizations of hip-hop, produced by Belafonte. Next came one for the television special “The Strolling Twenties” (1964), one of the first mainstream popular representations of the Harlem Renaissance, on which Belafonte partnered with Langston Hughes and Duke Ellington.

On top of another cabinet was a jumble of old posters. Goldwasser pulled some down and flipped them over to reveal lyrics scrawled out in handwriting or printed out in vintage fonts — they were the original cue cards for the video shoot for “We Are the World,” to help stars like Michael Jackson, Bob Dylan and Cyndi Lauper remember the words.

“There’s this aspect to the archive where you just say … whaaat?” Young said. “You just can’t believe what’s here.”

Belafonte, of course, wasn’t always famous. Goldwasser picked up one of the oldest items in the archive, a notebook from around 1947 for a theater class at the New School’s Dramatic Workshop (where his classmates included Marlon Brando, Elaine Stritch and Tony Curtis) and started reading: “Sometimes I feel lonely, so lonely it frightens me. …”

Belafonte’s musical career started not long after, in similar storybook fashion. In 1949, he was working in the kitchen at a jazz joint called the Royal Roost, where he made his debut as a singer one night during intermission — with a backing band that included Charlie Parker and Max Roach.

Soon, he was working steadily.

A detailed ledger from 1951 shows how much he got paid for gigs at important clubs like the Village Vanguard, Birdland and the Blue Angel (and exactly how much of a cut his manager took).

Huge scrapbooks of clippings trace how his career grew, starting with a patchwork of tiny mentions in newspapers, moving on to magazine covers.

“You can see how he just gets busier and busier, until he’s everywhere,” Young said.

The archive includes material relating to his close relationships with Robeson, Sidney Poitier and King, whom Belafonte met in 1956 during the Montgomery bus boycott.

Young started flipping through a pile of response cards pledging support for the Committee to Defend Martin Luther King and the Struggle in the South, founded in Belafonte’s apartment in 1960, after King was arrested in Alabama on trumped-up charges of tax evasion.

He arranged a dozen on the table, in what looked like a lotto game meets Who’s Who of Black America: Lorraine Hansberry, Nat King Cole, Lena Horne, James Baldwin, Dorothy Dandridge, Langston Hughes (who signed in his signature green ink). Wrapped inside a handwritten letter from artist Charles White was a telegram of support from Brando.

There are also some surprises, like a touching 1985 letter from Joan Baez, telling him how much he had meant to her when she was starting out, even if the snobbery of the folk movement wouldn’t let her admit it.

“I learned every song you sang by heart and didn’t get snotty about being a purist until everybody told me I was the Virgin Mary,” she wrote. “It was only then that I decided you were ‘commercial.’”

The archive’s rarities also include a trove of photographs and planning notes from the week in February 1968 when Belafonte was the guest host of “The Tonight Show.” His eclectic guest list that week included King, Robert F. Kennedy, Lena Horne, Bill Cosby, Wilt Chamberlain, Marianne Moore and Zero Mostel.

Initially, he hesitated over Johnny Carson’s invitation to take over the show. “I told them I couldn’t do an hour of humor,” he recalled in the interview. “But I said I could go out every night and just talk to the people I most revered.”

Not that his interviews made everyone happy. The archive includes a cue card for a statement he read on the last night, responding to viewers who complained that he didn’t present “the other side” on civil rights and Vietnam.

“I don’t think that’s necessary,” it reads. “The other sides to both issues are only too well represented in every media and in reality, … We have been living with ‘the other side’ every day.”

The interviews with Kennedy and King (both of whom would be assassinated that year) were saved, presumably because of their newsworthiness, and clips can be seen on YouTube. But the show did not generally save tapes of whole episodes in that era or make transcripts, according to a letter in the archive from Carson — meaning that the material in Belafonte’s archive may be the only documentation that survives, Goldwasser said.

Asked what he hoped people would glean from his archive, Belafonte was both grand and humble: “What people learn when they read Mark Twain, when they read Frederick Douglass, when they listen to Ella Fitzgerald — what the times and the people were like.”