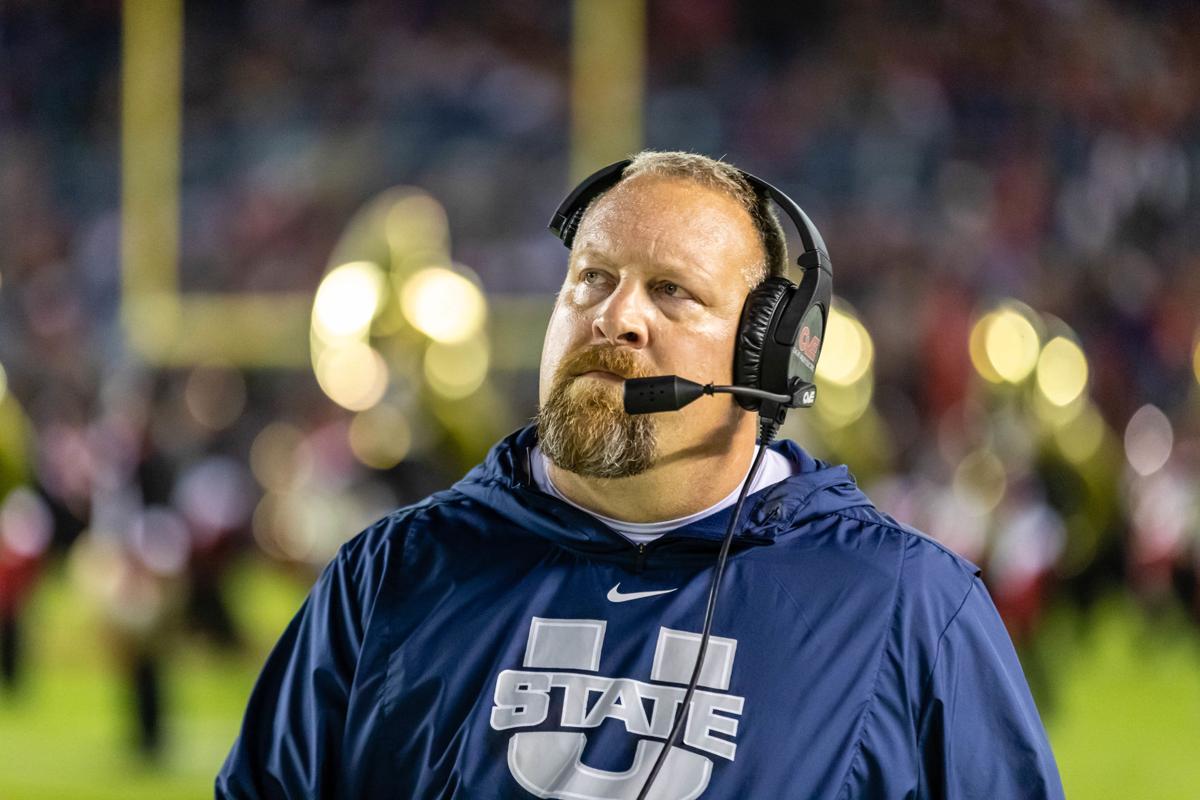 Stacy Collins is in his fifth year as an assistant coach with the Utah State University football program. 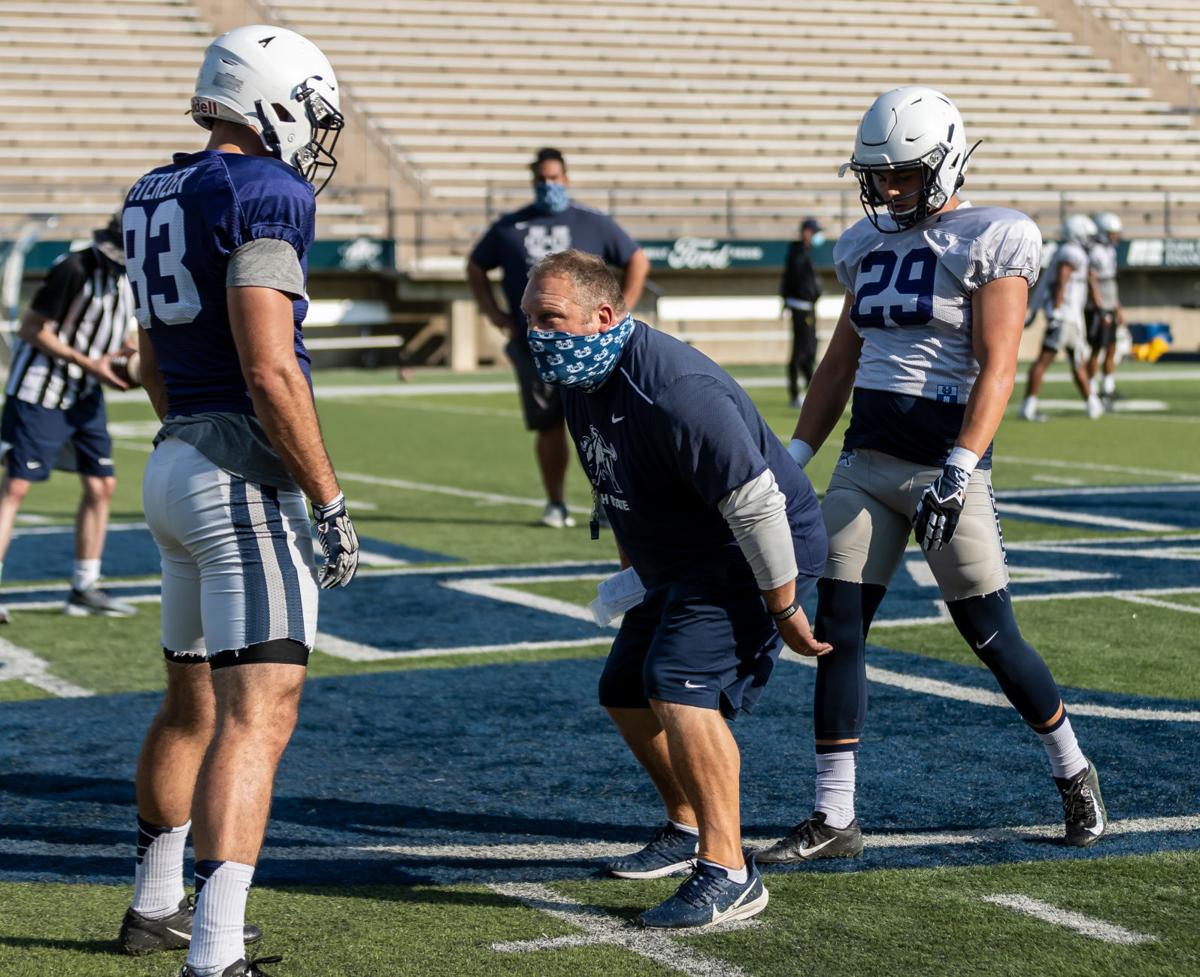 Stacy Collins goes through technique with a player during a Utah State practice. Collins is the co-defensive coordinator and secondary coach for the 2020 season. 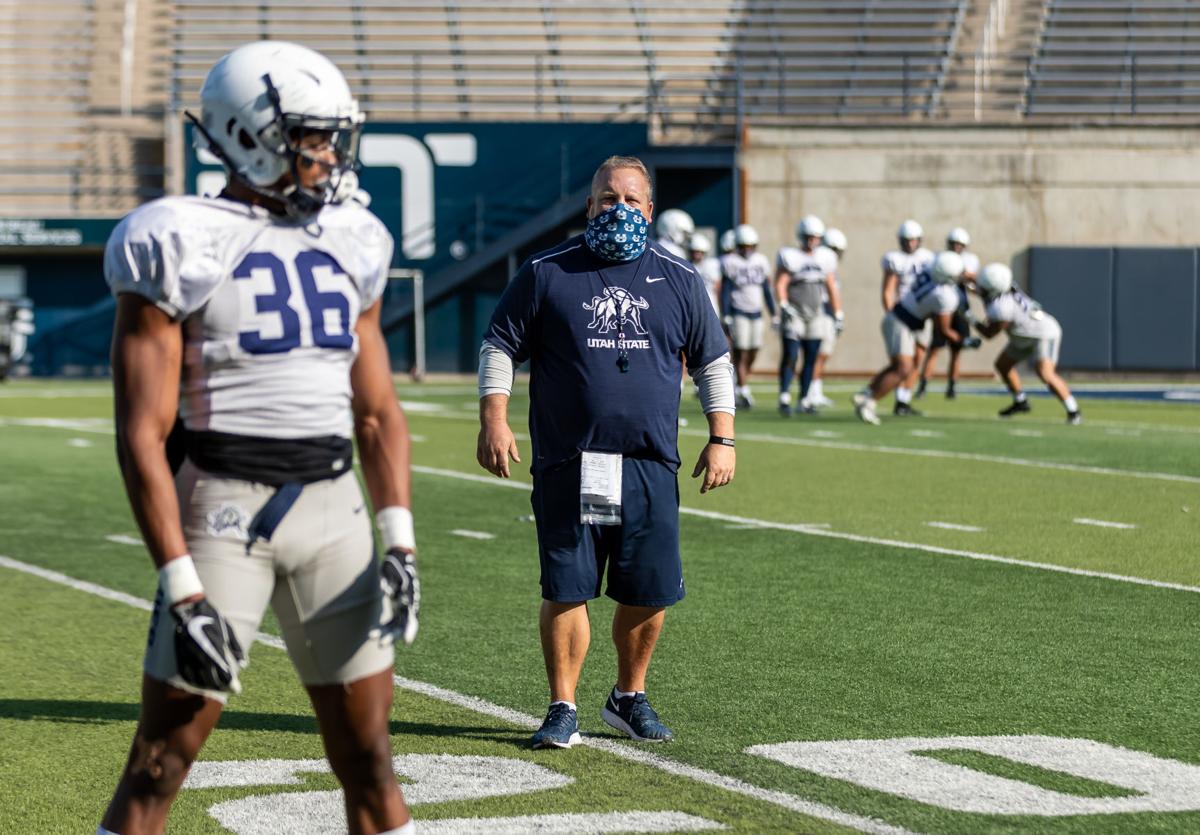 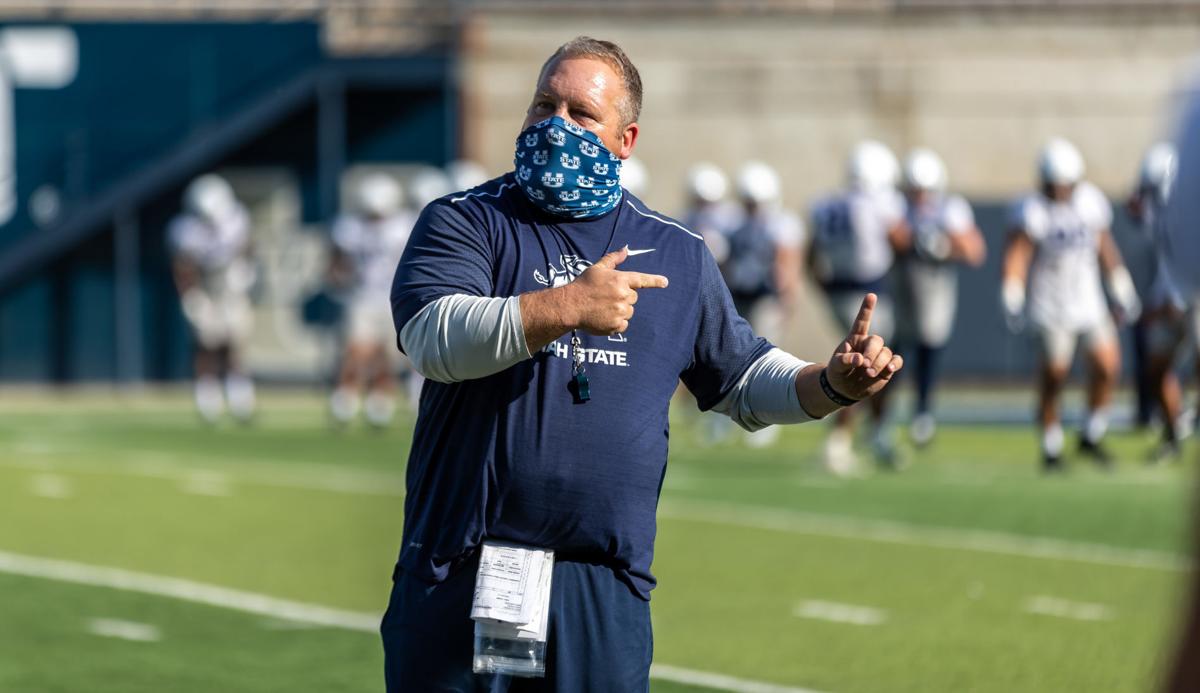 Assistant coach Stacy Collins has been a part of three bowl games with the Utah State football team.

Stacy Collins is in his fifth year as an assistant coach with the Utah State University football program.

Stacy Collins goes through technique with a player during a Utah State practice. Collins is the co-defensive coordinator and secondary coach for the 2020 season.

Assistant coach Stacy Collins has been a part of three bowl games with the Utah State football team.

Along with the coronavirus pandemic, the Utah State Aggies have dealt with other adversity during the abbreviated 2020 college football season.

Frank Maile, the co-defensive coordinator and defensive line coach for the Aggies, was selected the interim head coach for the remainder of the season.

Utah State took a 19-point loss to Fresno State at home in its fourth game, then saw its contest at Wyoming on Nov. 19 canceled due to COVID-19 issues.

But the Aggies notched their first win on Thanksgiving Day, defeating New Mexico 41-27 at Merlin Olsen Field at Maverik Stadium. Utah State (1-4, 1-4 MWC) trailed by seven at halftime, but used a 28-point third quarter to take control of the game.

“It was extremely important (to get a win),” said Stacy Collins, a Sutherlin High School graduate who’s the co-defensive coordinator and secondary coach for Utah State. “We needed to play better football, which we did in all three phases. We got going offensively, were able to get (the defense) off the field more and did some good things on special teams.”

The 45-year-old Collins, who was born in Roseburg and picked up his diploma from Sutherlin in 1993, is in his fifth year as an assistant coach at Utah State. He was the special teams coordinator and running backs coach last year.

The Aggies have played in three bowl games during Collins’ time in Logan, whipping North Texas 52-13 in the 2018 New Mexico Bowl to cap an 11-2 season — tying the school record for most wins in a season.

They were led by quarterback Jordan Love, who passed for 3,567 yards and 32 touchdowns. Love is now a rookie with the Green Bay Packers of the National Football League.

“(Logan) has been a great spot to live,” Collins said. “It’s a great place to raise kids and there are some unbelievable people here.

“I’m a teacher and educator, that’s my background. Coaching is teaching for me. I enjoy being around the kids, developing them as players and people and creating those relationships.”

The Utah State defense made some positive strides against New Mexico, allowing 348 yards and three touchdowns.

The Aggies had two takeaways (one interception, one fumble recovery), and finished with four sacks and six pass breakups. Freshman inside linebacker Kina Maile — the nephew of Frank Maile — returned a fumble 16 yards for a touchdown in the third quarter.

Freshman safety Luke Marion intercepted a pass late in the game to help seal the win.

“We still have to play better defensively, but that (effort) was good to see,” Collins said.

Utah State has allowed averages of 35.2 points and 490.2 yards through five contests.

The offensive player of the game for the Aggies against the Lobos was Andrew Peasley. The sophomore from La Grande, Oregon, who came out of quarantine after testing positive for COVID-19 and was making his first college start, completed 14 of 21 passes for 239 yards and four TDs.

Peasley was also the team’s leading rusher with 118 yards on 11 carries, highlighted by a 62-yard scoring run in the fourth quarter.

“He had a tremendous game,” Collins said.

The Aggies hope to take that momentum into their final scheduled home game. They host Air Force (2-2, 1-2) at 6:30 p.m. PST Thursday, and the contest will be televised by CBS Sports Network.

The Falcons are guided by Roseburg High School graduate Troy Calhoun. Air Force had its game with Colorado State last week at home canceled because of COVID-19 issues within the CSU program.

“Troy has done an unbelievable job with that program,” Collins said. “They have more variations than just the triple option and do a great job of mixing it up (offensively). They can run counter and play-action at you.

“You have to take the fight to them right away. They’re going to come right at you and play a physical brand of football, and we’re going to have to fight to get some takeaways and get off the field.”

Collins is proud of the resiliency the players have showed following the departure of Andersen, who was in his second stint with the program. He guided the Aggies from 2009-12, going 26-24. Andersen returned in 2019 and finished 33-33 overall in five-plus years at Utah State.

Andersen was Oregon State’s head coach from 2015-17, but resigned in the middle of the ’17 season following a 1-5 start.

“It’s been a wild ride,” Collins admitted of the 2020 campaign. “None of us saw that (Andersen’s firing) coming. The kids have been going through a lot of transition, starting with COVID. They’ve done a great job coming back and fighting through it.

“There have been a ton of ups and downs and we just take it day by day. We’re happy to be playing football.”

The futures of the current Utah State assistants will be up in the air after a new head coach is selected following this season. Some could get retained and some won’t.

“We all know what we signed up for,” Collins said. “Right now the focus in on the players and finishing the season right.”

Collins, who was a linebacker at Western Oregon University from 1994-97, is a well-traveled coach with 22 years of experience in the U.S. and Europe.

He was the head coach at Division II South Dakota School of Mines for four years prior to joining the Utah State staff, going 16-27 with two winning seasons. Collins was the assistant head coach at Portland State and its special teams coordinator in 2011.

Collins credits his wife, Mandi, for her support through the years. They met at Western Oregon, and have been married 18 years and are the parents of four daughters.

“The hardest transition is the family. My wife’s handled all these moves, which isn’t an easy thing to do,” Collins said.

Collins competed in four sports in high school. He was a fullback and linebacker for the Sutherlin football team, which was coached at the time by Ty Salness.

The Bulldogs advanced to the Class 3A playoffs his junior year in 1991, losing to Sherwood in the first round and finishing 5-5 overall. Sutherlin went 6-3 in 1992, but missed the postseason after tying for fourth in the competitive Sky-Em League.

Collins was an honorable mention all-Sky-Em linebacker both those seasons. He made 20 tackles in a 15-12 victory over La Pine at home in 1992.

Collins called a 6-0 upset at then-No. 7-ranked Junction City in 1991 “a big-time win for our program. Both Wilcox brothers (Josh and Justin) were playing for them.”

“Ty Salness was a great mentor and great person and I’m appreciative of everything he did,” Collins said. “We had some good football teams and those were great experiences.”