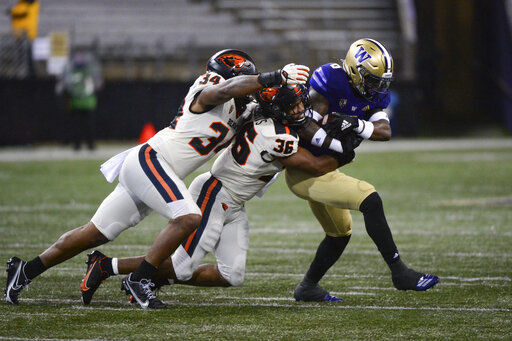 Washington running back Richard Newton (6) is tackled by Oregon State linebackers Omar Speights (36) and Avery Roberts (34) during a Pac-12 football game on Nov. 14 at Husky Stadium in Seattle. 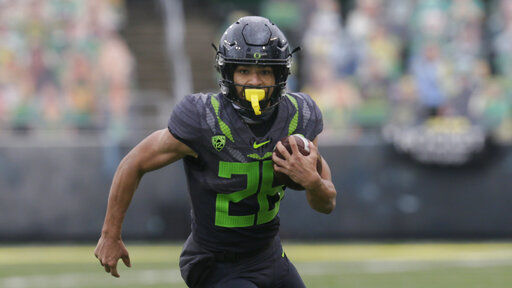 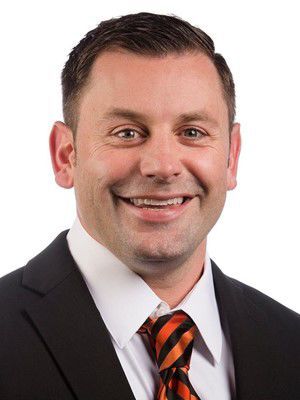 Washington running back Richard Newton (6) is tackled by Oregon State linebackers Omar Speights (36) and Avery Roberts (34) during a Pac-12 football game on Nov. 14 at Husky Stadium in Seattle.

Can the Beavers find something extra against the favored Ducks on Friday?

“Our guys will be ready to play,” Cookus, Oregon State’s special teams coordinator, said via telephone Monday from Corvallis. “I expect us to play well.”

Oregon State (1-2) and No. 9-ranked Oregon (3-0) will meet in the 124th edition of the football rivalry. Game time is 4:30 p.m. at Reser Stadium and no fans will be in the stands because of the coronavirus pandemic.

ESPN will televise the contest.

Formerly called the Civil War, the two clubs are squaring off in the fourth week of the Pac-12 season after the 2020 conference slate was shortened due to the pandemic. All nonconference contests were canceled.

The OSU-UO game is normally played in the final week of the regular season.

“It feels a little different, but it’s around Thanksgiving and that’s usually when we play them,” Cookus said. “We’re grateful to be playing football. Our next opponent happens to be the Ducks, and we’re excited about the opportunity to go out there and show what we can do.”

In last Saturday’s game with the Golden Bears at Reser, a special teams play set up the Beavers’ game-winning score, a 1-yard TD run by quarterback Tristan Gebbia with 4:30 left. Jesiah Irish blocked a punt, giving OSU the ball at the Cal 14.

California drove to the Beavers’ 10, but Chase Garbers’ pass was tipped by Hamilcar Rashed Jr. and intercepted by John McCartan.

Irish was selected the Pac-12 Special Teams Player of the Week, giving OSU that award for the second straight week. Champ Flemings was honored for his performance against Washington, returning four kickoffs for 125 yards.

Jermar Jefferson led the Beavers offensively against Cal, rushing for 196 yards on 18 carries — highlighted by a 75-yard touchdown run on the first play of the game. Jefferson was named the Pac-12 Offensive Player of the Week.

“It was a big win for us,” Cookus said. “We finally were able to finish the game. I was excited for the guys to win that game, it’s nice to see us get some results after all the hard work.

“We’re improving, but still not where we need to be. We can see each week we’ve made improvements in all phases of the game. We’ve got to play four quarters of football ... we know most games come down to the fourth quarter and we’ve got to be able to finish them.”

Cookus knows the Beavers will have to play their “A” game in order to stay with the Ducks, who are averaging 38.7 points and 499.7 yards a game.

“Oregon is good. They have a lot of weapons on offense,” he said. “They have some new faces, but kind of reload. They’re doing a nice job, have some weapons on the outside (with the receivers). They have a quarterback (Tyler Shough) who’s been waiting in the wings (behind Justin Herbert), and he’s taking charge and is running their offense at a high level.

“We’re going to have to tackle well and make them earn it, and come up with some takeaways. We have to make sure the guys are doing their jobs and keep the ball in front of us, play good team football.”

Shough, who passed for 334 yards and three touchdowns against UCLA, is one of three running threats for Oregon along with CJ Verdell (241 yards, three TDs) and Travis Dye (172 yards, one TD).

Shough has completed 57 of 86 passes for 873 yards and eight TDs. His top receivers are Jaylon Redd (12 catches, 160 yards) and Devon Williams (nine for 163). Tight end Hunter Kampmoyer made five receptions for 70 yards and a score versus the Bruins and Dye has caught three scoring passes out of the backfield.

“We need to start fast, take care of the ball and get some takeaways,” Cookus said. “We need to be solid in all phases against a good team.”

The Beavers have the top rusher in the conference in Jefferson, who has 449 yards and ranks second in the Pac-12 with 149.7 a game.

OSU averages 26.7 points and 354.3 yards. The Beavers will go against a UO defense that allows averages of 26 points and 432 yards.

“Gebbia’s improving each week. I know there are some plays he’d like back and has to learn from,” Cookus said. “(Jermar) is doing a great job of running the ball and our O-line is getting better each week, they’re playing physical.

“As a whole, sometimes we look pretty darn good. Other times we can’t seem to get going. Our focus is putting it all together, starting fast from the get-go.”

Cookus knows the importance of this game. He played in four of them, going 2-2 against the Ducks with wins in 1998 and 2000. Cookus intercepted Joey Harrington three times in Oregon State’s 23-13 victory over the then-No. 5 Ducks in 2000 at Reser.

“It’s fun to play your rival,” Cookus said. “You always want to step up your game when you play those guys. It’s for the right to own the state for at least a year.”