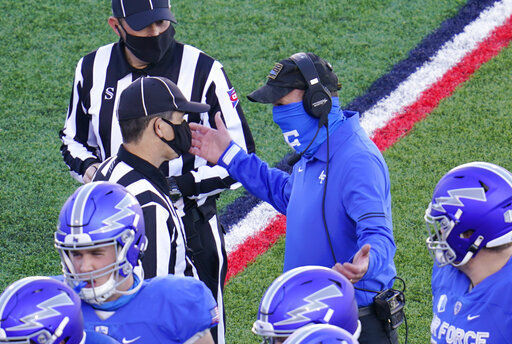 Air Force head coach Troy Calhoun argues with referees for a call in the first half of a Mountain West Conference game against Boise State on Oct. 31 at Air Force Academy, Colo. 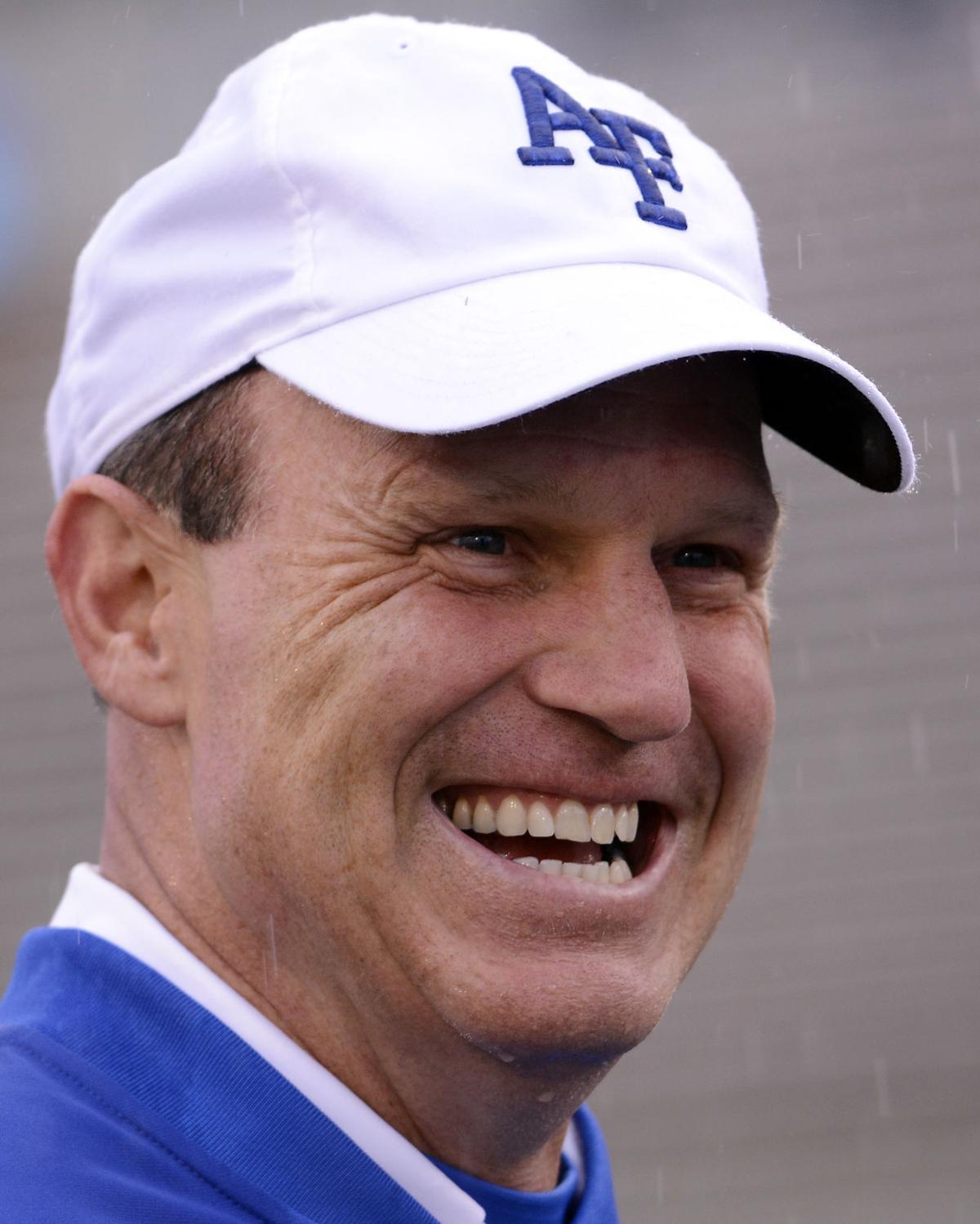 NOTE: After this story was published, the Colorado State-Air Force game on Thanksgiving day was canceled due to COVID-19 issues with CSU.

In the world of Division I college football, the coronavirus pandemic has delivered hit after hit and certainly tested the resolve of the players and coaches this fall.

Each week there have been games canceled or postponed around the country due to COVID-19, and teams have been forced to play short-handed at times due to positive tests or contact tracing.

The Air Force Academy Falcons are one of those schools grinding their way through this unprecedented season, playing home games in front of no fans and getting tested multiple times during the week.

Air Force, a member of the Mountain West Conference, didn’t open its season until Oct. 3 and has played four games to date.

The Falcons had their game on Nov. 7 against Army in West Point, New York, postponed. A week later, their contest against Wyoming in Laramie was canceled.

“That’s current reality (in 2020). That’s life a little bit, it doesn’t always go the way we planned it,” Troy Calhoun, the Air Force head coach and former Roseburg High School quarterback, told me via telephone from Colorado on Sunday night. “You have to adjust accordingly.

“You kind of bend, adapt, and have to be flexible to no end. You just don’t take anything for granted this year. We’re thankful to be able to play football.”

The 54-year-old Calhoun, a 1985 Roseburg graduate, reached a coaching milestone against New Mexico. He notched his 100th career win at Air Force, getting there in his 14th season as head coach. He owns a record of 100-71 at the academy, which is located near Colorado Springs.

Calhoun, a former Air Force player who succeeded Hall of Fame coach Fisher DeBerry in 2007, owns a 60-46 record in conference play and is 5-5 in bowl games.

“It means we’ve been a part of a really good staff and have kids who embrace being part of a hard-working, disciplined program,” said Calhoun, wanting to credit those around him. “They’ve been able to balance their academic and military demands, and still be competitive on the football field.

“This is a hard school, but a phenomenal place. You pinch yourself every day getting to work here.”

The Falcons were coming off an exceptional 11-2 season in 2019, capped off by a 31-21 victory over Washington State in the Cheez-It Bowl. Air Force was No. 22 in the final Associated Press Top 25 poll.

“We had some really good players and were fortunate to stay healthy,” Calhoun said. “We had a couple of big wins (at Colorado and versus WSU). We had a ton of seniors who had played a lot of football for us and they stretched their capabilities.”

But the Falcons turned in a vintage Air Force performance against New Mexico, rushing for 356 yards and possessing the ball nearly 13 minutes more than the Lobos with their triple-option attack.

Sophomore fullback Brad Roberts carried the ball 28 times for 177 yards and three touchdowns for the Falcons in the victory. Matthew Murla chipped in 64 yards on the ground and sophomore quarterback Haazig Daniels ran for 55 yards and a TD and completed 4 of 5 passes for 66 yards.

The Falcons’ defense posted their first shutout in conference play since 2011.

“You thought you were watching that team (Roseburg) that had feathers on their helmets,” said Calhoun, referring to the triple-option offense the Indians ran under Thurman Bell. “We have to do something different here.

“This is a fun group to coach. They love to practice and love to learn. We had over 30 guys take a turn back from the academy, so that meant quite a roster shuffle this year.”

You can watch the Falcons in action on Thanksgiving day. Their game against Colorado State (1-2, 1-2) is scheduled to start at 11 a.m. PST and will be televised by CBS Sports Network (CBSSN).

Calhoun remembers playing on Thanksgiving day twice before: In 2018 at home against Colorado State, a 27-19 win; and in 2005 as an assistant under head coach Mike Shanahan with the Denver Broncos against the Dallas Cowboys, a 24-21 overtime win at Texas Stadium.