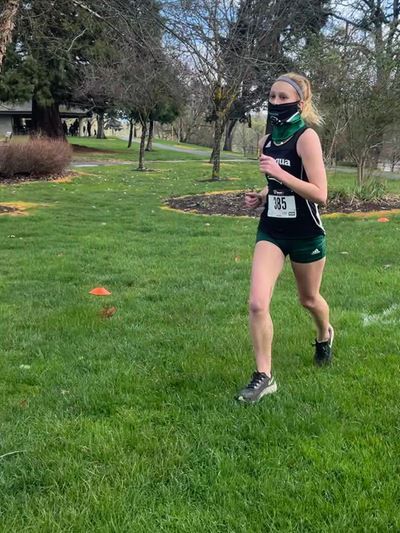 Umpqua’s Samantha Eichman runs to victory in the women’s 5,000-meter race on Saturday in the Umpqua Invitational cross country meet at Stewart Park. 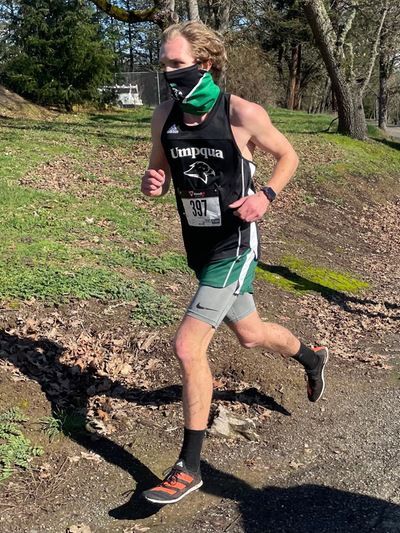 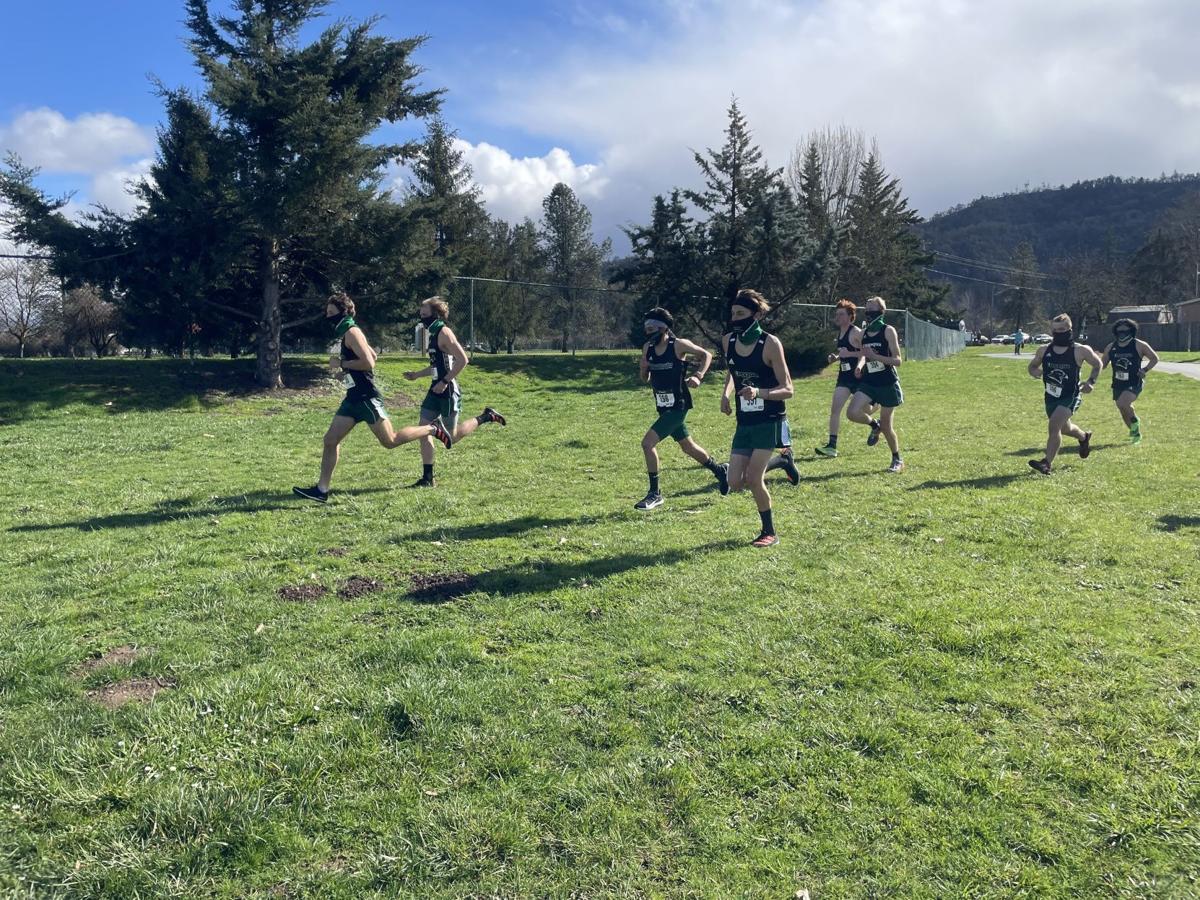 The men’s 8,000-meter race takes place during the Umpqua Invitational on Saturday at Stewart Park. 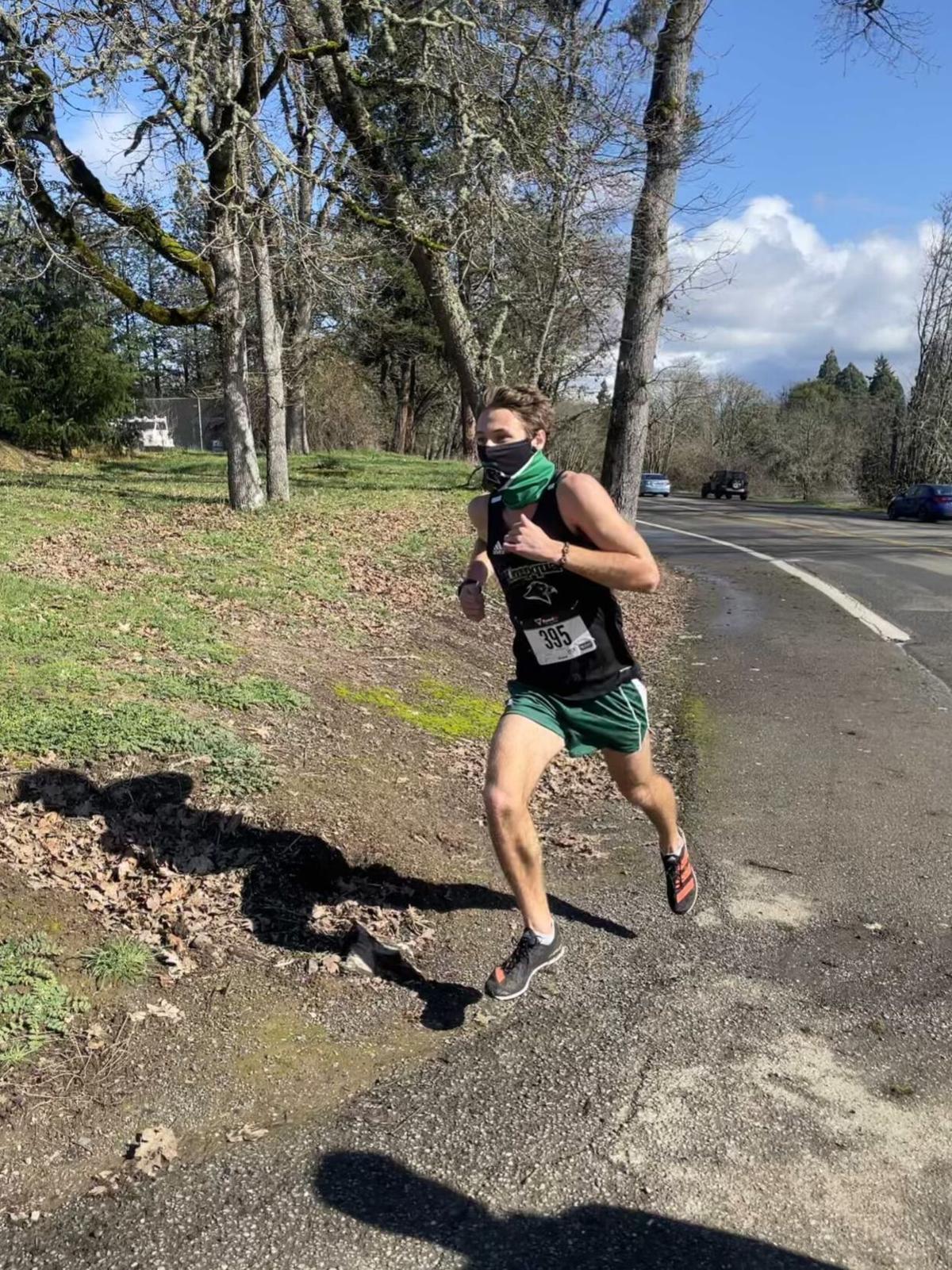 Umpqua’s Konrad Raum cruises to victory in the men’s 8,000-meter race during the Umpqua Invitational Saturday at Stewart Park.

Umpqua’s Samantha Eichman runs to victory in the women’s 5,000-meter race on Saturday in the Umpqua Invitational cross country meet at Stewart Park.

The men’s 8,000-meter race takes place during the Umpqua Invitational on Saturday at Stewart Park.

Umpqua’s Konrad Raum cruises to victory in the men’s 8,000-meter race during the Umpqua Invitational Saturday at Stewart Park.

The Umpqua Community College cross country teams hosted their second meet of the 2021 winter season on Saturday, facing two other South Region schools in the Umpqua Invitational at Stewart Park.

Samantha Eichman, a Roseburg High School graduate, earned her second win for the UCC women. She covered the 5,000-meter course in 22 minutes, 10 seconds — 48 seconds ahead of runner-up Hanna Caldwell of Chemeketa.

Eichman’s time was nearly three minutes faster than last week’s performance on a hilly course at UCC. She was familiar with the Stewart Park layout, having run on it during her days at RHS.

“It was nice to run on a flat course. It reminded me a little bit of high school, it felt like a senior race to be honest,” Eichman said. “Coach (Alan King) changed the course up a little bit and I liked what he did better.

“I was pretty motivated to run. I really wanted to go under 22 minutes at least, but I underestimated wearing a mask. The mud was a little crazy on the grass parts, but it was a fun race overall and I was happy with my time.”

“Sam looked good and strong. It looked like she was cruising out there,” King said. “Kathryn was a pleasant surprise. That’s a big jump for her.”

Umpqua finished with a perfect score of 15 points due to SWOCC and Chemeketa not having complete teams.

On the men’s side, UCC’s Konrad Raum notched his second victory. The sophomore from Cottage Grove was timed in 27:24 over 8,000 meters, more than a minute in front of second-place Jaime Mejia-German.

“The course was a lot harder than I thought it would be because of the mud,” said Raum, who had a minute PR for 8K. “I felt good about the race, but (the time) wasn’t what I was hoping for. I was hoping to go into the 26s, and if I had people to run with I feel I could do it.”

“Konrad got the lead from the gun and kept pulling away,” King said. “Those last two miles were where he separated himself.”

Tristan Wood, a 2017 Roseburg graduate, finished third for the Riverhawks (28:29), an improvement by 2 1/2 minutes for the distance.

“I felt great,” said Wood, who plans to sign with Lewis-Clark State. “That’s a big PR for me. I was shooting for the low 28s, but I think it turned out pretty well. I liked the last part of the race ... one of the SWOCC guys (William Hennum) made it a difficult race and beating him was really nice.”

“I’m real excited for Tristan,” King said. “He’s in his third year here and came as a walk-on pole vaulter. We saw something in his speed and ran him in the 800 (in track), and it took him a while how to understand to be a distance runner.”

Wood feels he’s in the “best shape of my life.”

“All the work I’ve put in during the past year is definitely paying off,” he said.

“Dexter was a surprise,” King said. “He caught a couple of SWOCC guys and one on our team. The second half (of the race) was really strong for him.”

The Riverhawks edged the Lakers in the team scoring, 26-30.

Umpqua will compete in the Lane Invitational on Feb. 27 in Eugene.

Riverhawks get ready for region meet with time trial