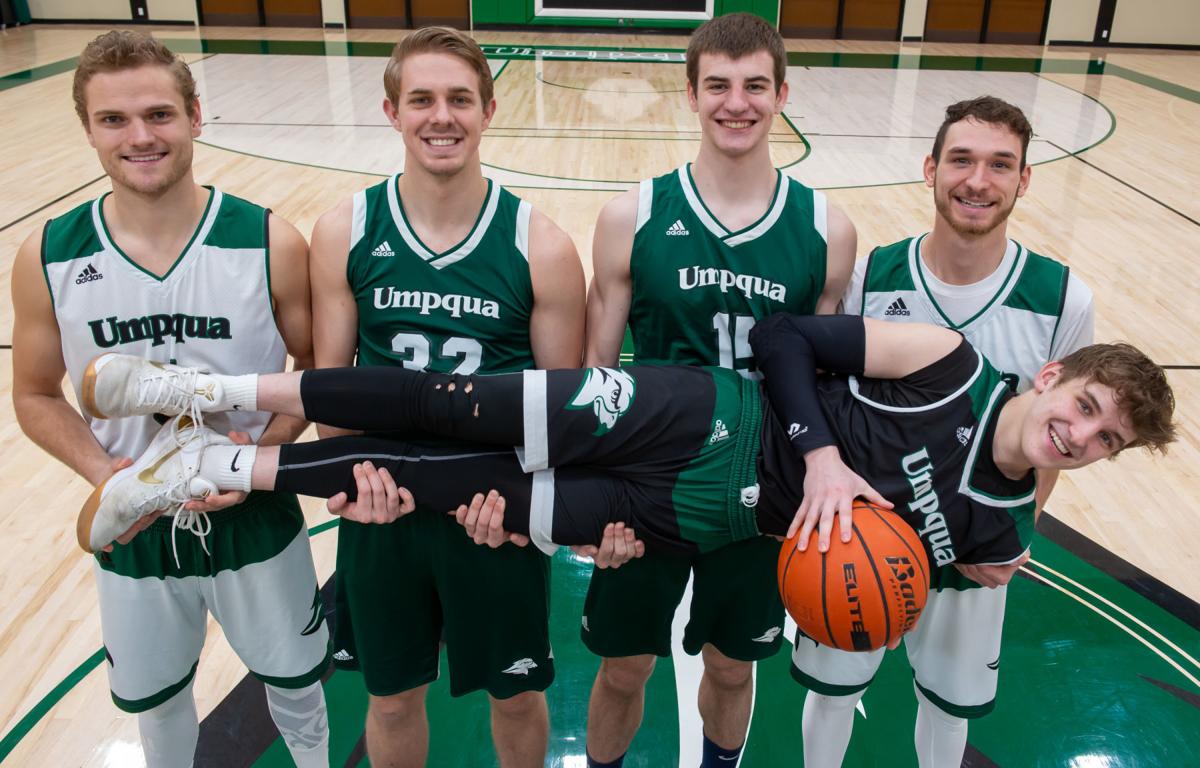 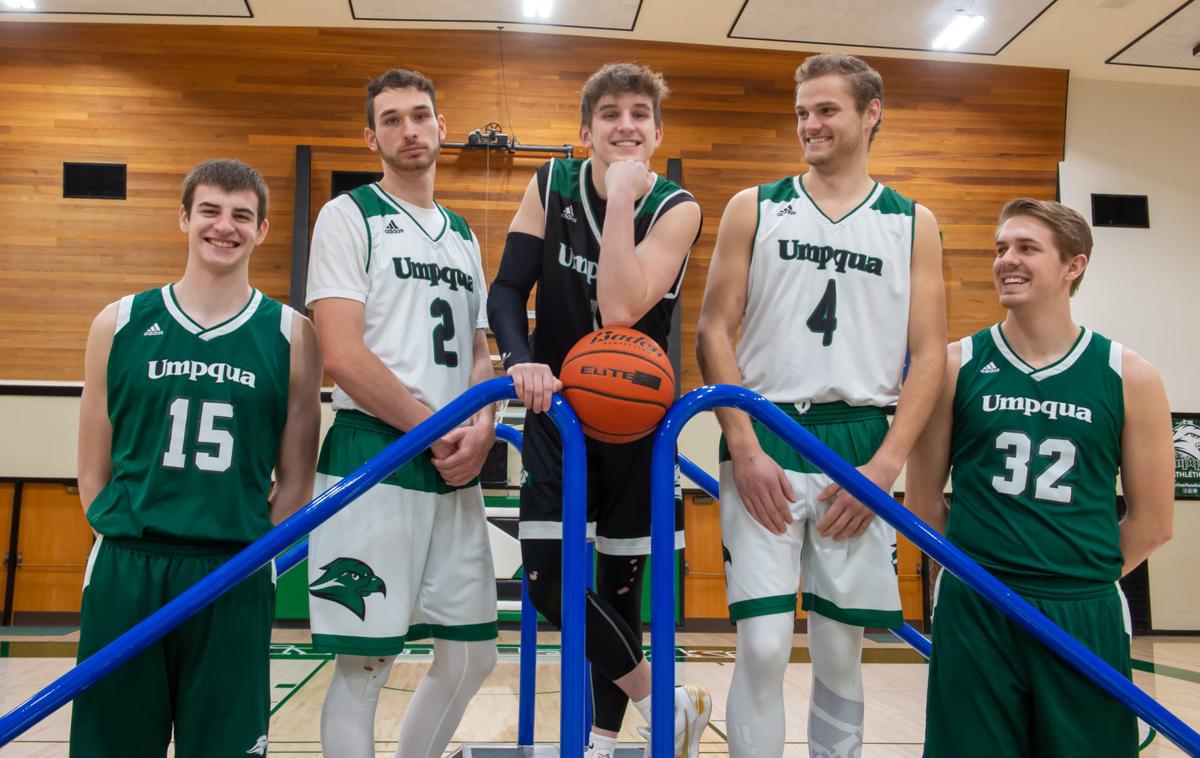 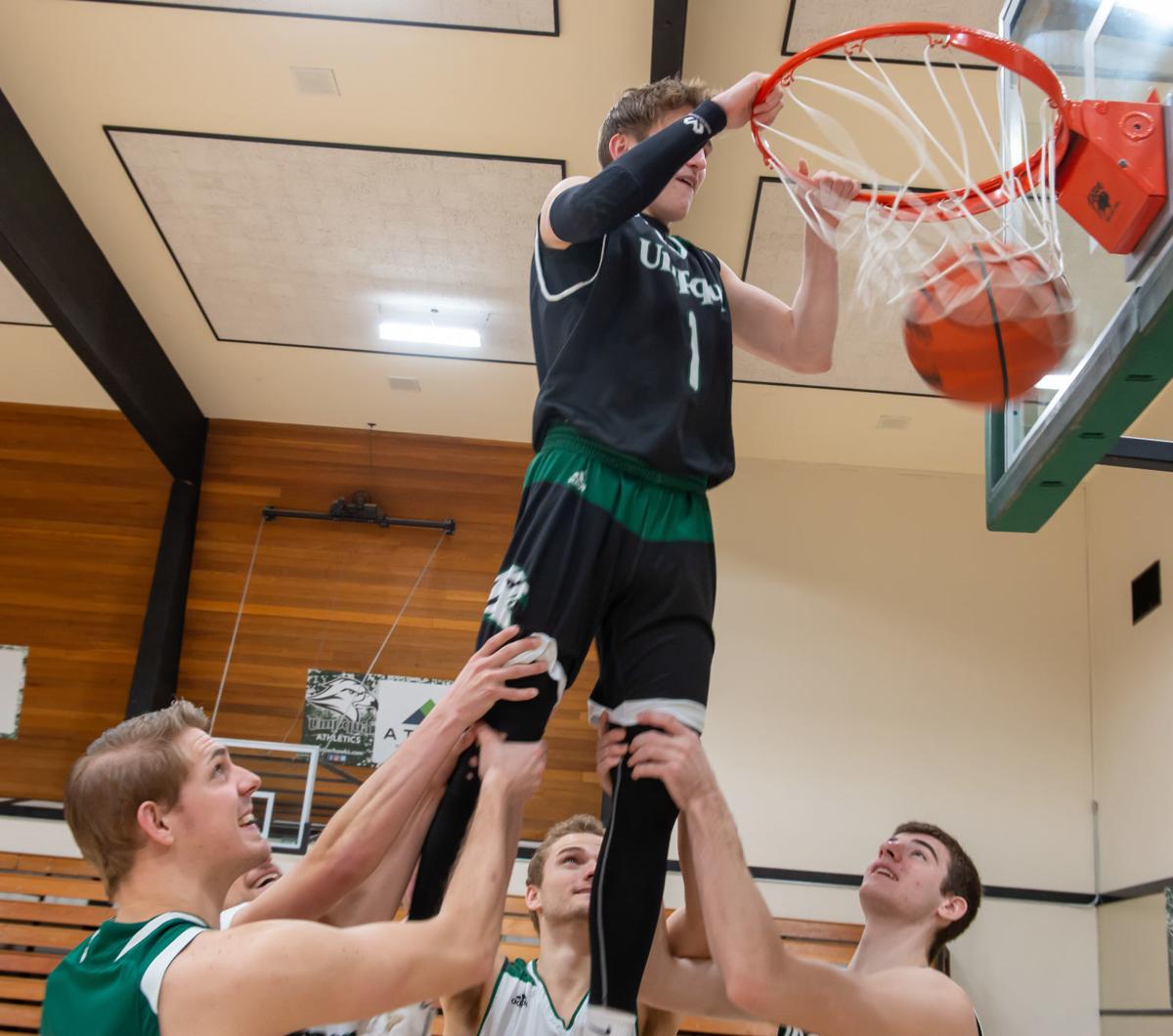 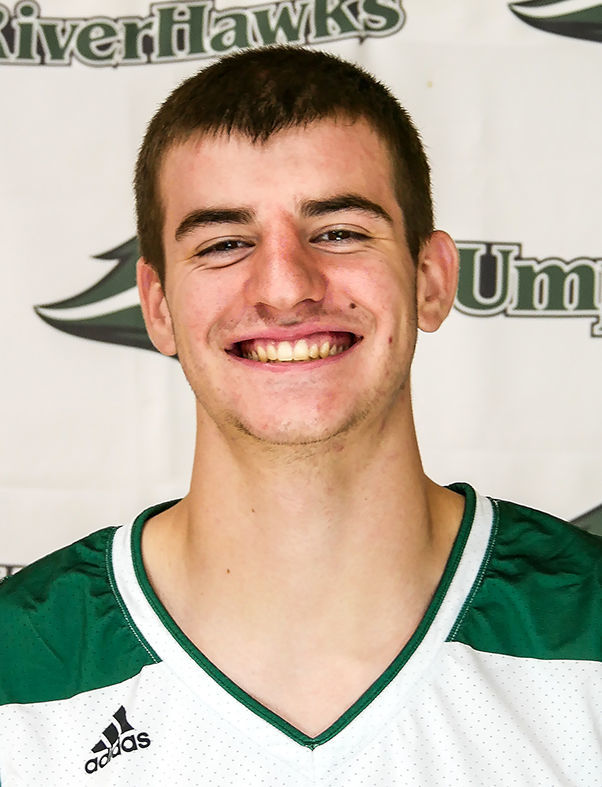 WINCHESTER — The Umpqua Riverhawks’ sophomore class is an interesting mix.

Three are in their 20s, two are married, one is a local kid and a premier rim defender, and one is arguably the best point guard in the Northwest Athletic Conference.

The quintet has a unique blend of experiences, both on the basketball court and in life, and this weekend they will try and turn all of that into something Umpqua Community College hasn’t seen since the early 1970s: a men’s basketball championship.

The No. 6-ranked Riverhawks open this weekend’s NWAC Tournament at 4 p.m. Saturday against Treasure Valley of Ontario in Everett, Washington.

Umpqua (25-4), coming off a regular season which included a sweep of South Region champion Clackamas, will be gunning for the first NWAC title in the program’s history.

“We might not have won the South, but we’re just as good as the team that did,” said point guard Brock Gilbert, a sophomore from Syracuse, Utah. “We still feel like we’re the best team in the South and I think we proved it. We’re a contender.”

Gilbert, who played in a reserve role as a freshman behind second-team all-South point guard Connor Shaw last season, has earned his way this season. Gilbert led the NWAC with 10.9 assists per game and was named to the 2019-20 All-South first team as well as earning All-Defensive team honors.

Sixth in the conference at 35 minutes per game, Gilbert attacks with ferocity on both ends of the floor.

“The first word that comes to mind is spastic,” sophomore forward Spencer Campbell (Pleasant View, Utah) said of Gilbert. “He’s determined. He’s the one guy who probably gets the most heated in practice. He’s determined to win this and you see it in practice. We all are very competitive, he’s just very vocal about it, which is good. We need that.”

Where does all of that energy come from?

“Diet Coke,” Gilbert said, drawing laughter from his classmates. “Actually, it’s just that I’m not old like some of these other guys.”

The Riverhawks definitely have some seasoned veterans among their sophomore group. Tanner Quinton (Cardston, Alberta, Canada) is 23 years old and Campbell is 22, as is starting sophomore forward Kolten Mortensen (Santaquin, Utah).

All three served missions for the Church of Jesus Christ of Latter Day Saints, Quinton in Canada, Campbell in Japan and Mortensen in Costa Rica. Quinton and Campbell are both married.

“They’ve been in leadership roles before,” UCC coach Daniel Leeworthy said. “When you’re setting a tone for the culture of the program, to have these mature guys come in and have great leadership, that certainly has helped our younger group and helped some of the sophomores develop and grow as well.”

Quinton, who transferred from Snow College in Ephraim, Utah, said it was difficult at first transitioning into playing a role off the bench.

“It’s an interesting role,” he said. “Being a bench player, your job is to provide a spark. When you get your time, you have to make the most of it and realize that’s your role — whether you play eight minutes or 20 minutes.”

Quinton, a 6-2 guard, has scored in double figures seven times on the season, but has seen the bulk of his contributions come on the defensive end of the floor. The same for Campbell, a 6-6 forward.

“It’s hard,” said Campbell, who started just two games this season. “Sitting on the bench and not playing the minutes you’d like, of course it is. But we’re all here, we’re all still playing because we love the game. That’s why you go to practice and put in the work.”

Mortensen, a 6-7 forward who enters the NWAC tournament averaging 14.4 points and 6.3 rebounds, is among the conference’s top 3-point shooters at 39.8%. His success is due largely to the strength of the Riverhawks’ guard play and the inside presence of fellow sophomore Cameron Benzel (6-7) and freshman sixth man Akoi Yuot (6-7).

“I’d been a center my whole life until I came here,” said Mortensen, who was selected to the All-South second team. “Coach wanted me to be more of a ‘stretch four’ and use my shooting ability. When Cam is inside working, I can space things out from the outside and give him some room. If my guy drops off to help, I’ve got an open shot.

“With the guys on this team, if you get to the right spot, the ball is going to come. This team is really unselfish. The ball always gets where it needs to be.”

Benzel is one of the top shooters in the NWAC at 59.1% from the floor, most of that coming from inside the lane where the Riverhawks have averaged nearly 47 points per game. While averaging 12 points and 7.3 rebounds per game, he is also one of the conference’s premier rim protectors with 1.4 blocked shots per outing, which earn him a spot along with Gilbert on the South’s All-Defensive team.

He said the growth of this sophomore group has taken off this season.

“Last year was kind of tough because we were all spread out,” Benzel said. “I’m driving 30 minutes back and forth from Yoncalla and these guys all have their own apartments in town. It was a little bit of a struggle.

“But this year, we all know what we want to do (as a team), and that has brought us closer together and we’ve started doing more stuff outside of school and outside of practice.”

“We’re a fun team to watch,” added Gilbert, “and the fact that you’re doing it with guys you love and guys that are like brothers, it just makes everything more fun.”

Gilbert said his tenacity on the practice floor caught some of his younger teammates off guard at first.

Umpqua will carry the momentum of last Saturday’s last-second victory over top-ranked Clackamas into this weekend’s opening round of the NWACs. That win also comes with a deserved lift in confidence as the Riverhawks try to win the program’s first men’s basketball championship since taking the Oregon Community College Athletic Association crown in 1972.

“That was a huge momentum push for us,” Mortensen said. “We all feel like we’re the best team in the South Region and the best in the NWAC. We’re just preparing and hopefully we can win out this weekend.”

Freshman of the Year

Defensive Player of the Year

Coach of the Year