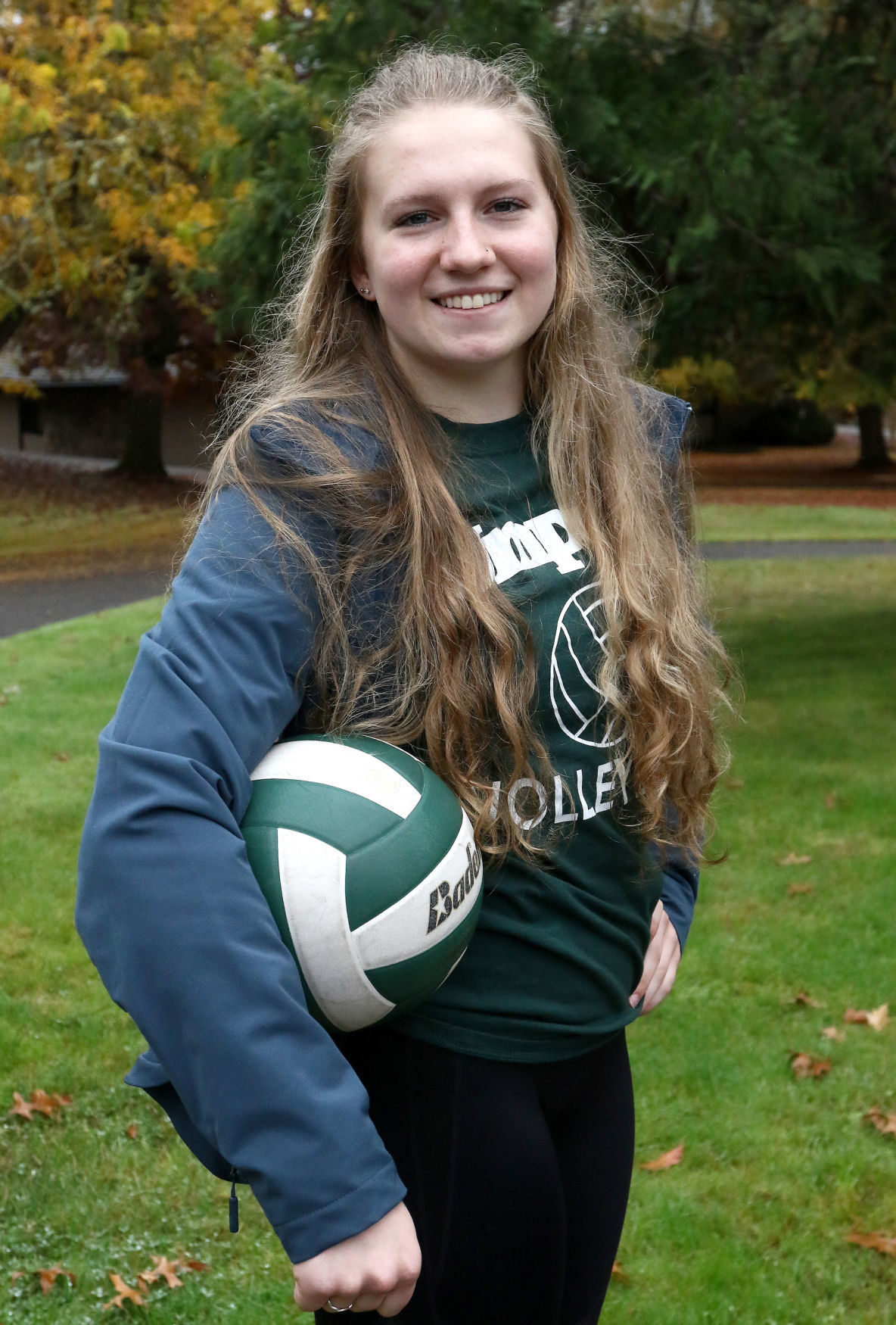 Sophomore setter Madison Becker has been a two-year starter for the Umpqua Community College volleyball team and an exceptional student. 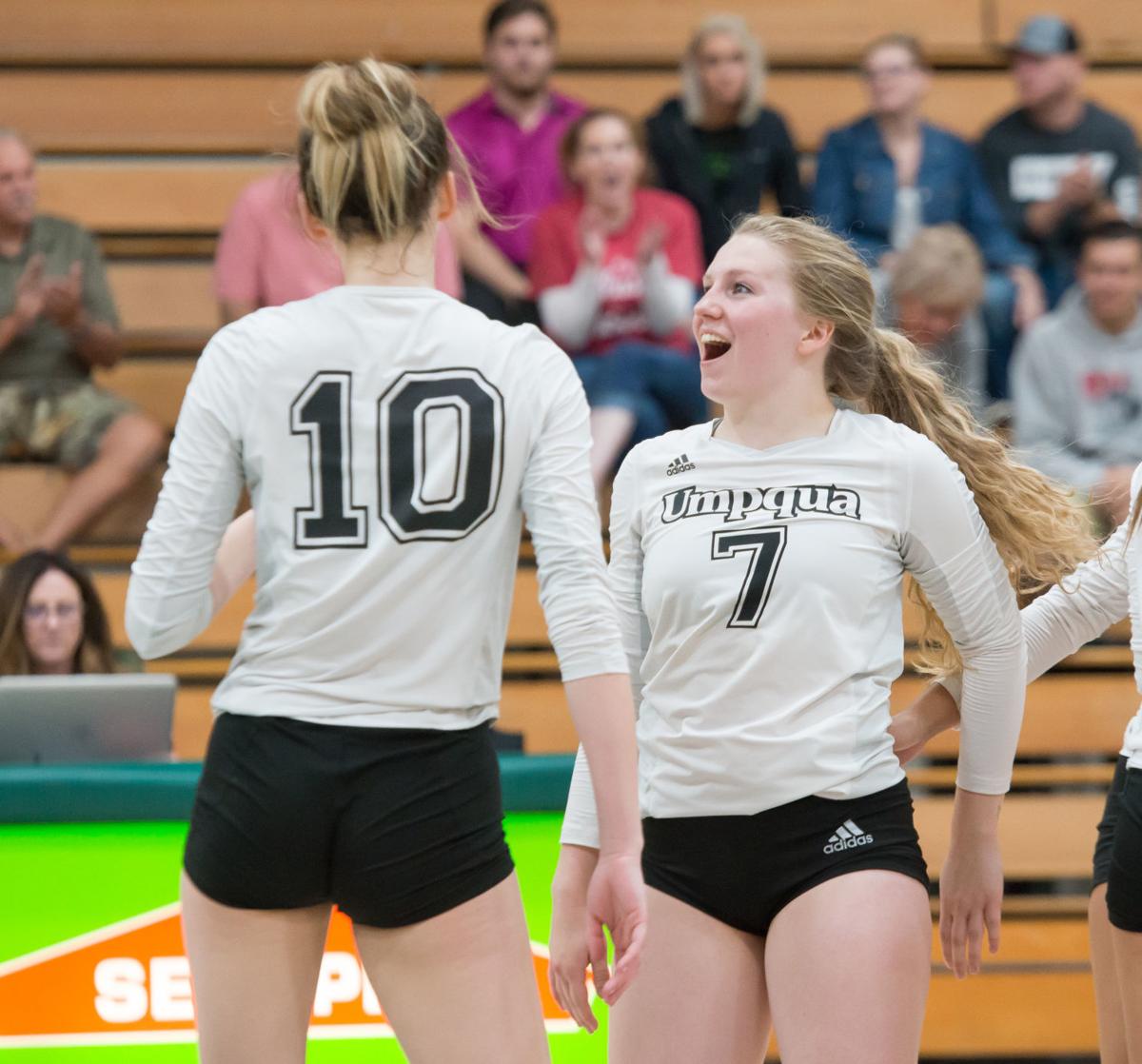 Umpqua sophomore setter Madison Becker (7) celebrates a point with Bailey Crawford-Caroll during a match on Oct. 19. Becker will play her final home match for the Riverhawks on Saturday. 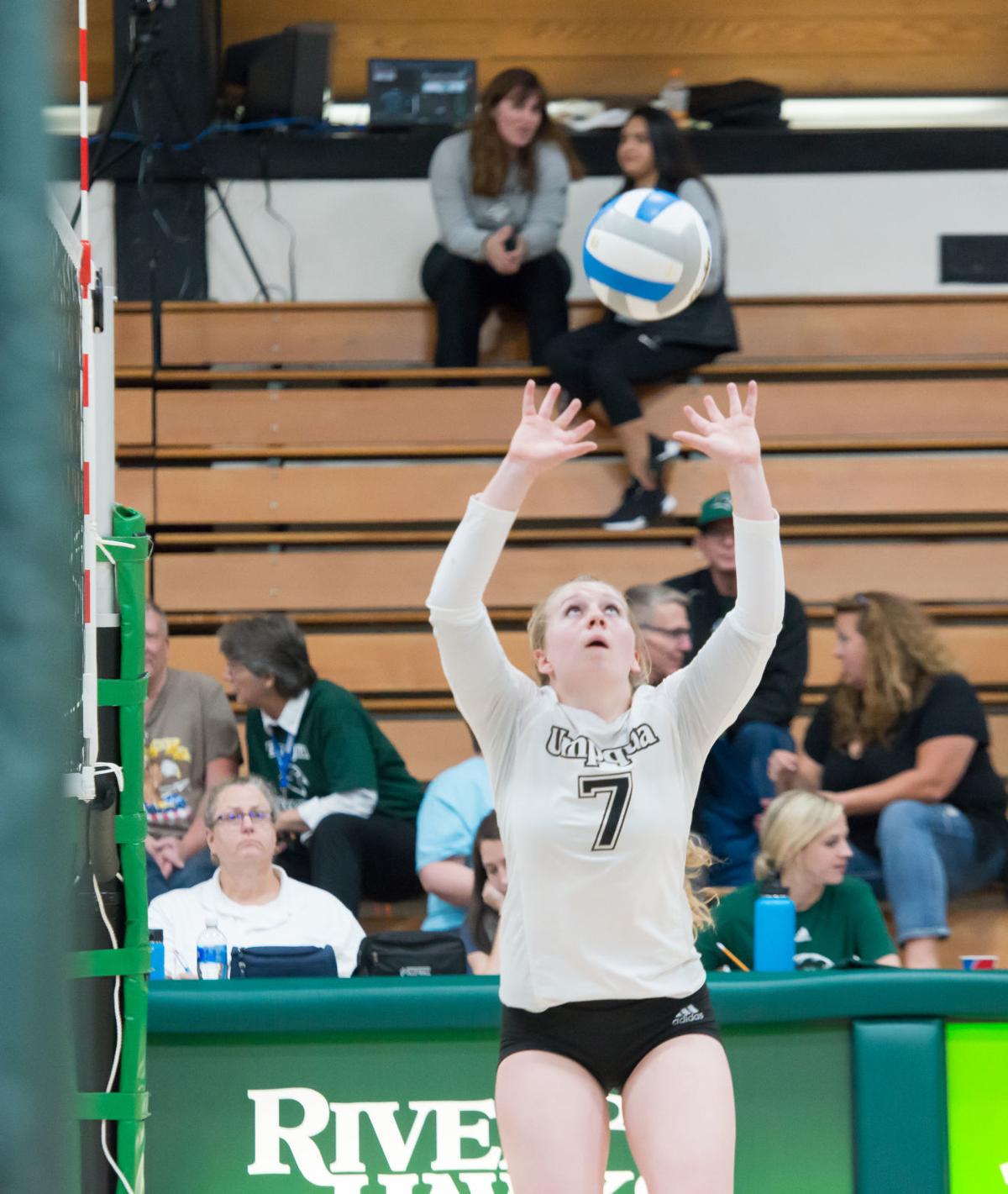 Umpqua Community College sophomore Madison Becker sets during a match earlier this season. Becker, one of the team’s most consistent players over the past two seasons, will play her final home match for the Riverhawks on Saturday.

Sophomore setter Madison Becker has been a two-year starter for the Umpqua Community College volleyball team and an exceptional student.

Umpqua sophomore setter Madison Becker (7) celebrates a point with Bailey Crawford-Caroll during a match on Oct. 19. Becker will play her final home match for the Riverhawks on Saturday.

Umpqua Community College sophomore Madison Becker sets during a match earlier this season. Becker, one of the team’s most consistent players over the past two seasons, will play her final home match for the Riverhawks on Saturday.

WINCHESTER — The Umpqua Community College volleyball team fell out of contention for a top-four finish in the Southern Region of the Northwest Athletic Conference with losses to Chemeketa and Clackamas last weekend at home.

The Riverhawks (12-17, 4-7 South) won’t accomplish their goal of qualifying for the NWAC tournament, but Madison Becker plans to give her all during the final three matches of the regular season.

Becker, a 5-foot-7 sophomore setter from Flagstaff, Arizona, is winding down a solid two-year career with the Riverhawks. Along with Emma Lind and Brooke West, Becker will play her final home match on Saturday afternoon when Umpqua hosts Lane Community College of Eugene.

“We all agreed we want to go out with a bang,” the 20-year-old Becker said Wednesday. “We have nothing to lose, we’re just going to go all out.”

Becker, a team captain, has kept a positive attitude throughout a frustrating season for the team. With a strong freshman class, the Riverhawks believed they had the talent to advance to the NWACs but will fall short for the second consecutive season.

It didn’t help when sophomore libero Kyrie Keffer, a starter, left the team a couple of weeks ago due to personal reasons.

“There’s a lot of different personalities on our team and sometimes they collide a little bit,” Becker said. “But overall we’ve gone over a lot of obstacles and still stayed together as a team. Of course we didn’t get the outcome we were looking for (advancing to the NWACs), but we all really adore each other very much.”

Between volleyball, academics and community service, Becker has delivered a model of consistency for the Riverhawks.

Working toward a bachelor’s degree in exercise science at Northern Arizona University — where she’ll transfer after graduating from UCC in the spring — the daughter of Kris and Tammy Becker carries a 3.8 GPA at Umpqua.

She’s a Transfer Opportunity Program (TRiO) student and a math tutor. Becker works at the UCC fitness center, and has given her time to community activities such as Champions Read, Boys & Girls Club mentorship and Community Clean-up.

“And the community service I’m involved with helps me get connected with a lot of other things. I love school, so learning new things is the way I want to go.”

On the court, Becker is a leader and directs the offense as the setter.

She’s compiled a whopping 673 assists on the season, ranking ninth in the NWAC with 7.74 assists per set. She’s made 225 digs on the defensive end, fourth best on the team.

“I’ve felt really good about it,” replied Becker, when asked about her season individually. “I just started to develop jump-setting, and it’s worked out a lot. It’s definitely some extra hard work, but I was ready to push myself and I think Lacy (Pinard, UCC head coach) believed in me, too.”

Becker — who’s listed at 5-7 on the roster but admits she’s nowhere close to that — has embraced her role as a captain.

“I want to encourage my whole team,” she said. “Being a setter is like being the quarterback of a team, but being a captain is leading by example and getting to know everybody on your team and knowing what kind of things work on the court. If they’re having a bad game, you know what to say to try and get them out of their funk.

“Being a team captain is just trying to keep everybody together.”

“Madison has an unprecedented work ethic on the court, but also in the classroom,” Pinard said. “She’s been a complete pleasure to coach. I’m eager to see what her future holds as she blossoms.”

Becker shared some tidbits about herself the public may not know.

“I’m a huge nerd,” she said with a grin. “I love Marvel movies and Star Wars, and was a band geek. I played the clarinet in high school, and really want to learn to play the guitar.”

Becker, who was introduced to volleyball in the sixth grade, will be a fulltime student at Northern Arizona.

“My time (at UCC) has been really satisfying,” she said. “I’ve gotten to meet a lot of people in the athletic department, a lot of teachers. I’ve found myself growing to love psychology, too. It’s all been a great experience and I’m so happy I got this chance to meet a lot of new people.”

Coaching is in store for Becker. She’ll coach a club team here after the season is over and is hoping to coach in Arizona, perhaps at Northland Prep.

“Volleyball helped me develop into the person I am today,” Becker said. “It’s definitely going to be a huge adjustment (not playing), but I’m planning on staying involved. Not being able to play, I know I’m going to miss it.”

What: A 5-foot-7 sophomore setter for the Umpqua Community College volleyball team.