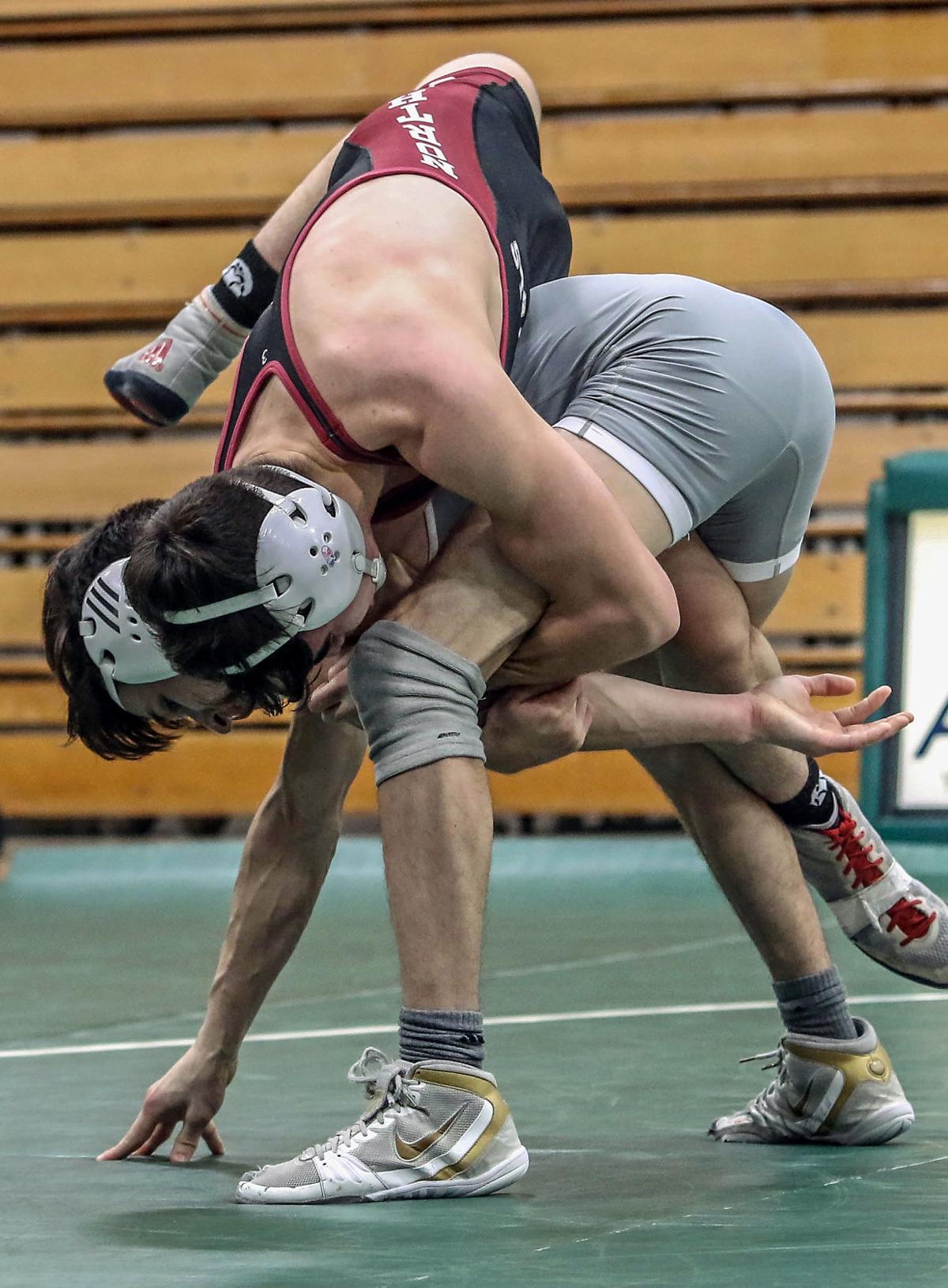 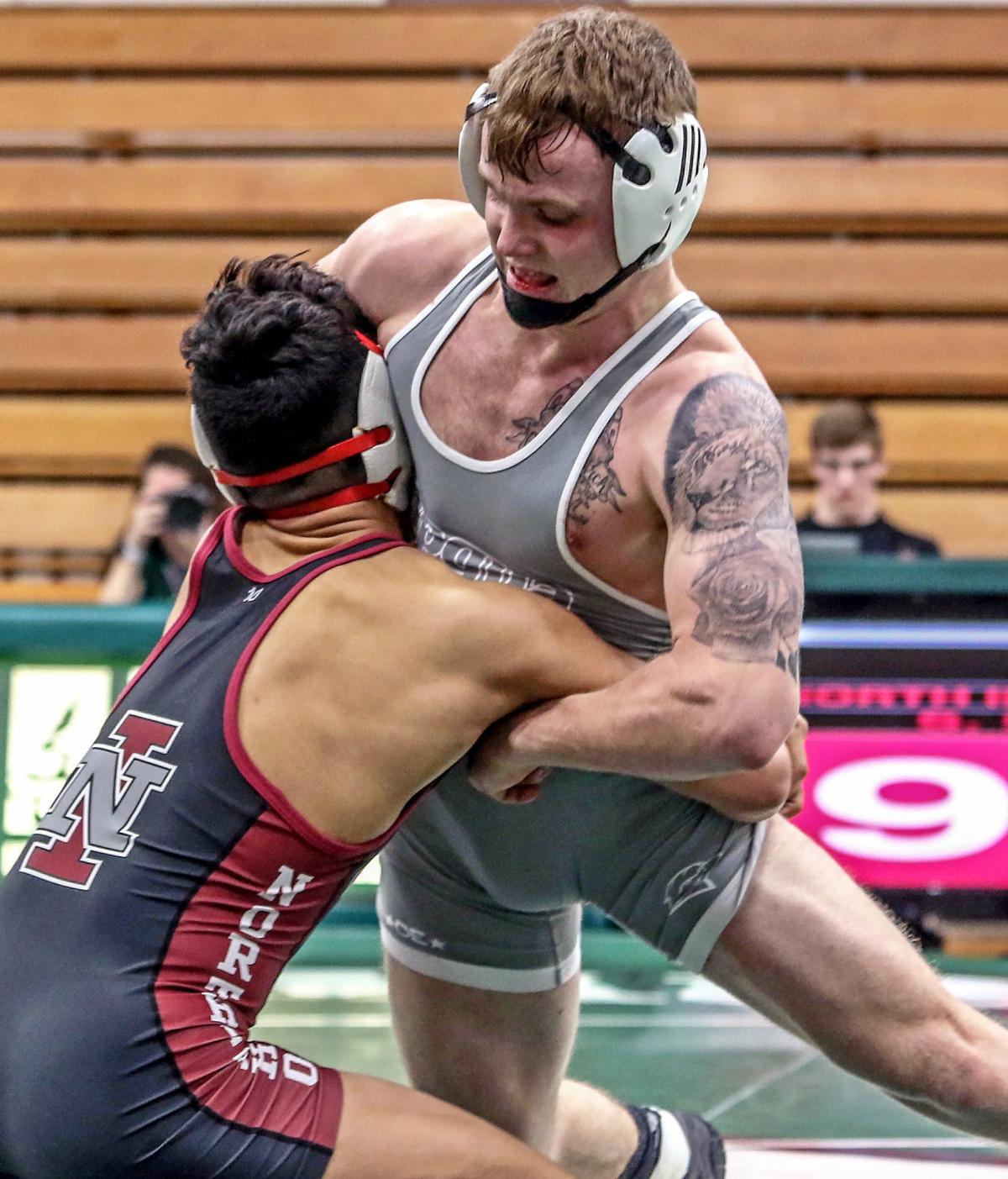 Umpqua wrestler Garrett Russell, right, controls North Idaho’s Sal Silva in the closing seconds of their 157-pound match, but Silva escaped with a 9-7 decision during their dual meet in Winchester on Saturday. 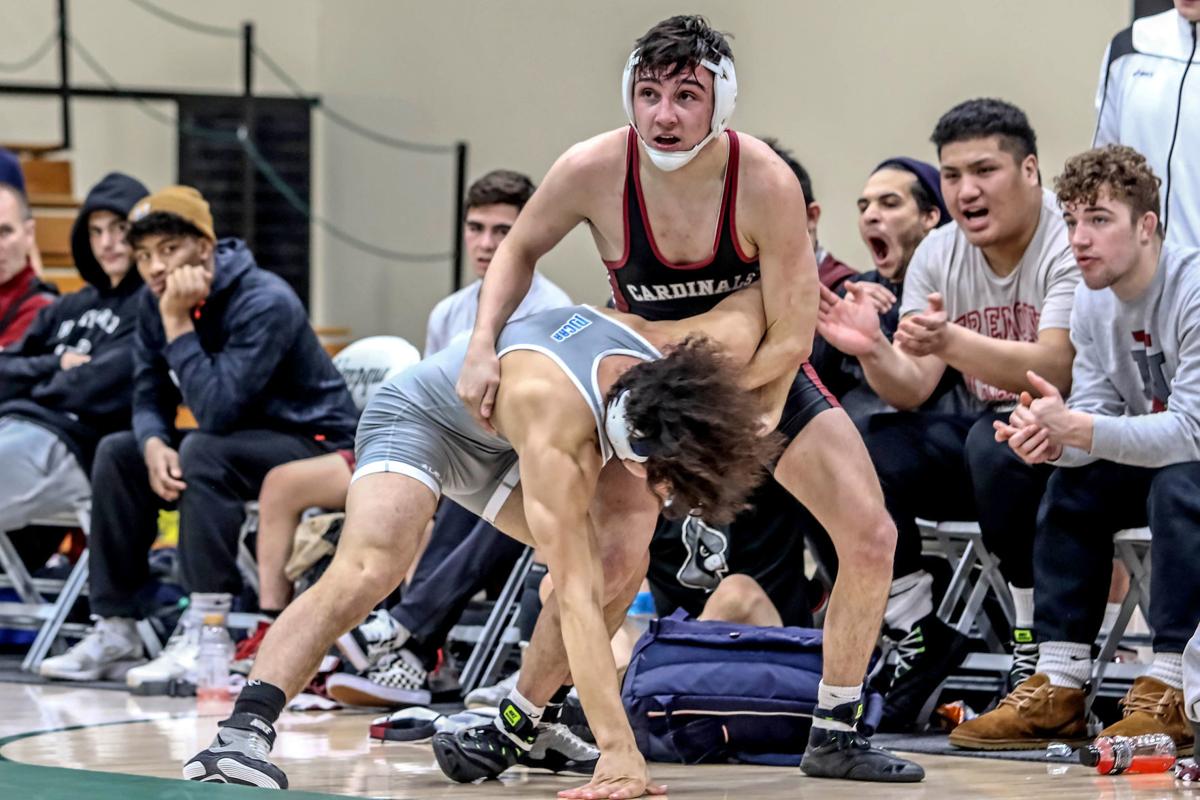 North Idaho’s Alex Lopez, right, looks up after coming off the mat with Umpqua’s Titus Mejia in the 149-pound match during their dual wrestling meet on Saturday. Mejia prevailed with a 5-0 decision.

Umpqua wrestler Garrett Russell, right, controls North Idaho’s Sal Silva in the closing seconds of their 157-pound match, but Silva escaped with a 9-7 decision during their dual meet in Winchester on Saturday.

North Idaho’s Alex Lopez, right, looks up after coming off the mat with Umpqua’s Titus Mejia in the 149-pound match during their dual wrestling meet on Saturday. Mejia prevailed with a 5-0 decision.

Trailing 9-7 late in the third round, Russell threw NIC’s Sal Silva — the seventh-ranked 157-pounder in the national junior college circuit according to Intermat.com — straight to his back, but didn’t have enough time to secure near-fall points, and Silva escaped with the decision.

That win helped the Cardinals of Couer d’Alene, Idaho, lock up a 34-10 dual-meet victory over No. 24 Umpqua Saturday afternoon.

Russell, a sophomore from Roseburg, jumped out to a quick 4-2 lead in the first round, but a late takedown by Silva knotted the match at 4-all. Silva entered the third round with a 9-4 advantage before Russell’s rally.

“Russell’s match got a little exciting at the end,” Umpqua coach Kyle Temple said. “I thought we might have had a couple of back points that could have put it into overtime.”

After spotting North Idaho an early edge, the Riverhawks rallied in the middle weights, getting a decision from Titus Mejia at 149 pounds and a 9-1 major decision from Caleb Werner, a freshman from Tillamook, at 165 to pull within 19-7 with four matches to go.

Ultimately, Umpqua gave up too many bonus points as the Cardinals posted three pins and accepted a forfeit in the team win.

“They’re the No. 3-ranked team in the nation for a reason,” Temple said.

Tayler Davis (184) earned a 4-2 decision over NIC’s Isaac Gomez, and Titus Mejia (149) blanked the Cardinals’ Alex Lopez 5-0 for the Riverhawks’ only other wins in the dual.

The problem for the Riverhawks’ coaching staff will be deciding a lineup. Only one wrester per weight class can be entered, and the ‘Hawks have veritable log jams from 149 pounds through heavyweight.

“You have to decide exactly who you want at each weight class, and sometimes that means having some tough conversations with some of the athletes,” Temple said. “But they understand that ultimately we are trying to improve our standing as a team, so we have to do what makes the team the most successful.”

The regional tournament will include North Idaho, No. 5 Clackamas, No. 11 SWOCC and No. 22 Highline Community College.