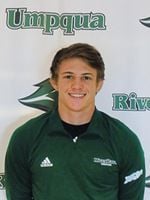 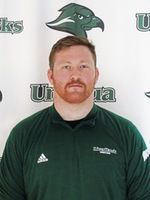 Umpqua Community College wrestlers are done after the first day of the NJCAA National Wrestling Championships in Council Bluffs, Iowa, on Friday.

The consolation round of four and the semifinals and finals in both the consolation and championship bracket will be wrestled Saturday.

Kiddoo won his opening match with a pin of Triton’s Thomas Russell in 3:38. In the round of 16 he lost a 15-3 major decision to Iowa Central’s Kevin Radcliff to drop into the consolation bracket.

The UCC freshman pinned Carter Cox of Ellsworth in 4:57, and won by fall over Kevin Saravia Merlos of Iowa Lakes in 6:46 before falling to Niagara’s Greg Quinn in 6:37 in the second round of eight.

Lamb went 2-2 at the tournament. In the opening round of 32, Lamb defeated John Fountain of Rowan by fall in 1:44. Lamb then fell in 2:58 to Northwest Kansas’ Elwin Trejo in the round of 16, dropping Lamb into the consolation bracket.

In the consolation bracket Lamb won a 5-0 decision over Justin Johnson of Mercyhurst, but dropped a 7-4 decision to Mike Okaro of Middlesex in the first consolation round of eight.

Russell fell to Kendon Lee of Northeast Oklahoma in 2:35 to start his tournament experience. The Roseburg graduate pinned Corey Eyer of Bergen in 2:03 in the first consolation round of 16, but lost a 4-2 decision to Muskegon’s Jaykob Bechtel in the second round.

Wright lost his first match by fall in 1:10 to Adam Reints of Minnesota West. The freshman won an 11-5 decision over Victor Tello of Spartanburg Methodist in the first consolation round of 16, but lost by technical fall in the second round to Andrew DeArmond of Barton in 2:56.

Umpqua freshman Myres fell to Cloud County’s Bryce Gfeller in two minutes in the round of 32 match of the championship bracket. Triton’s Andrew Poniatowski then pinned Myres in 2:18 in his first match of the consolation bracket.