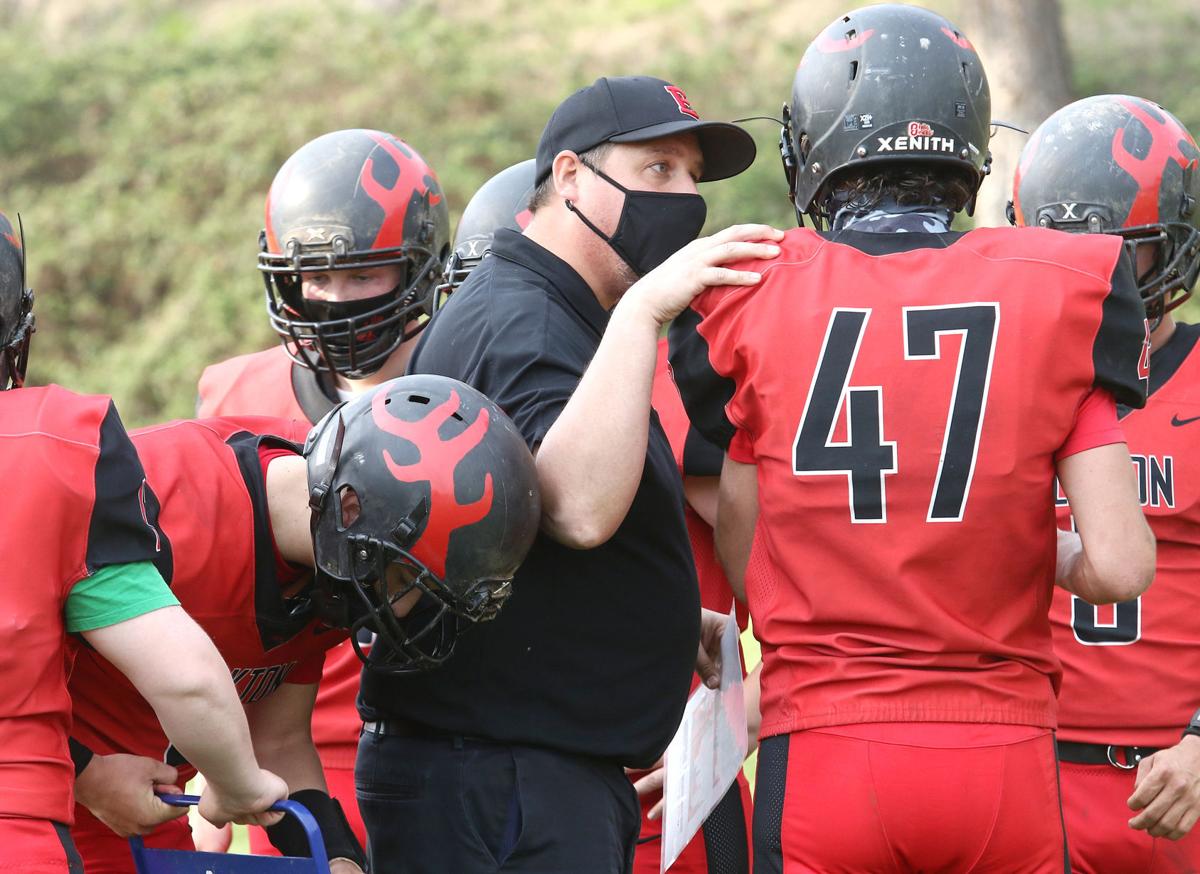 Elkton Charter School football head coach Jeremy Lockhart speaks with players during a timeout in their game with Siletz Valley at Saladen Field in Elkton on Friday. 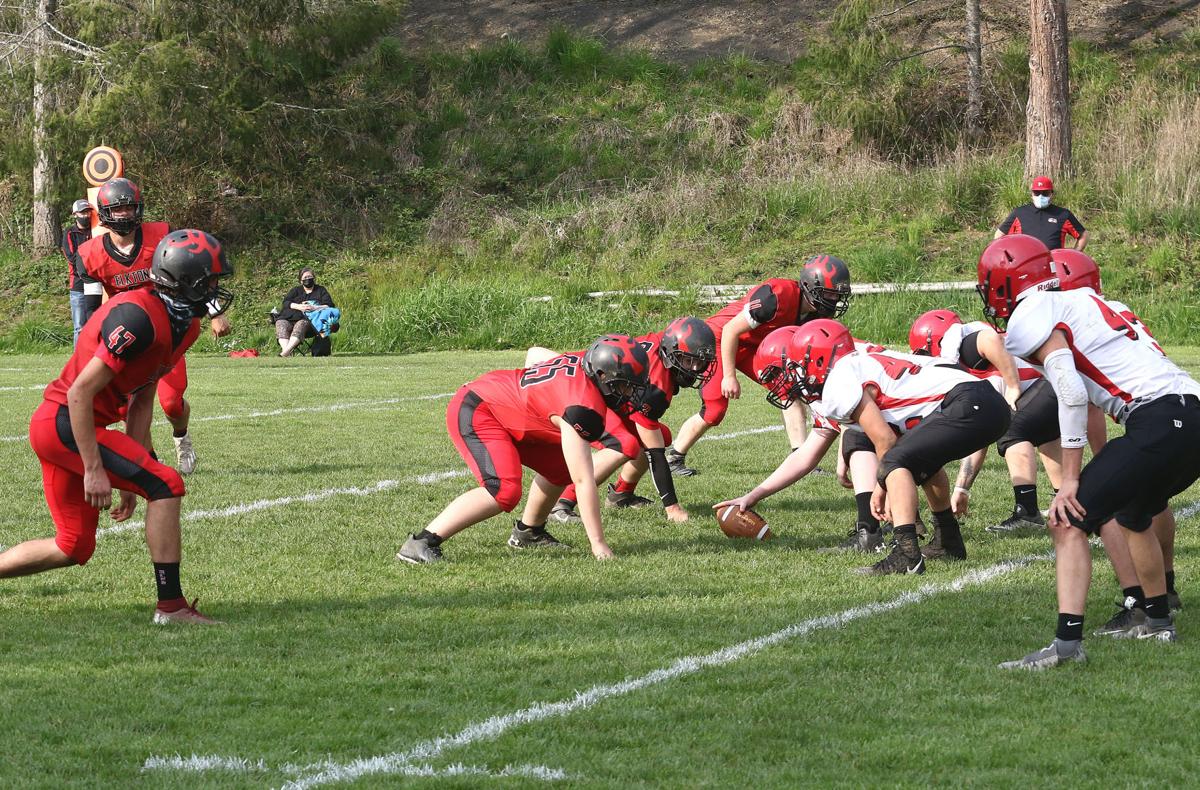 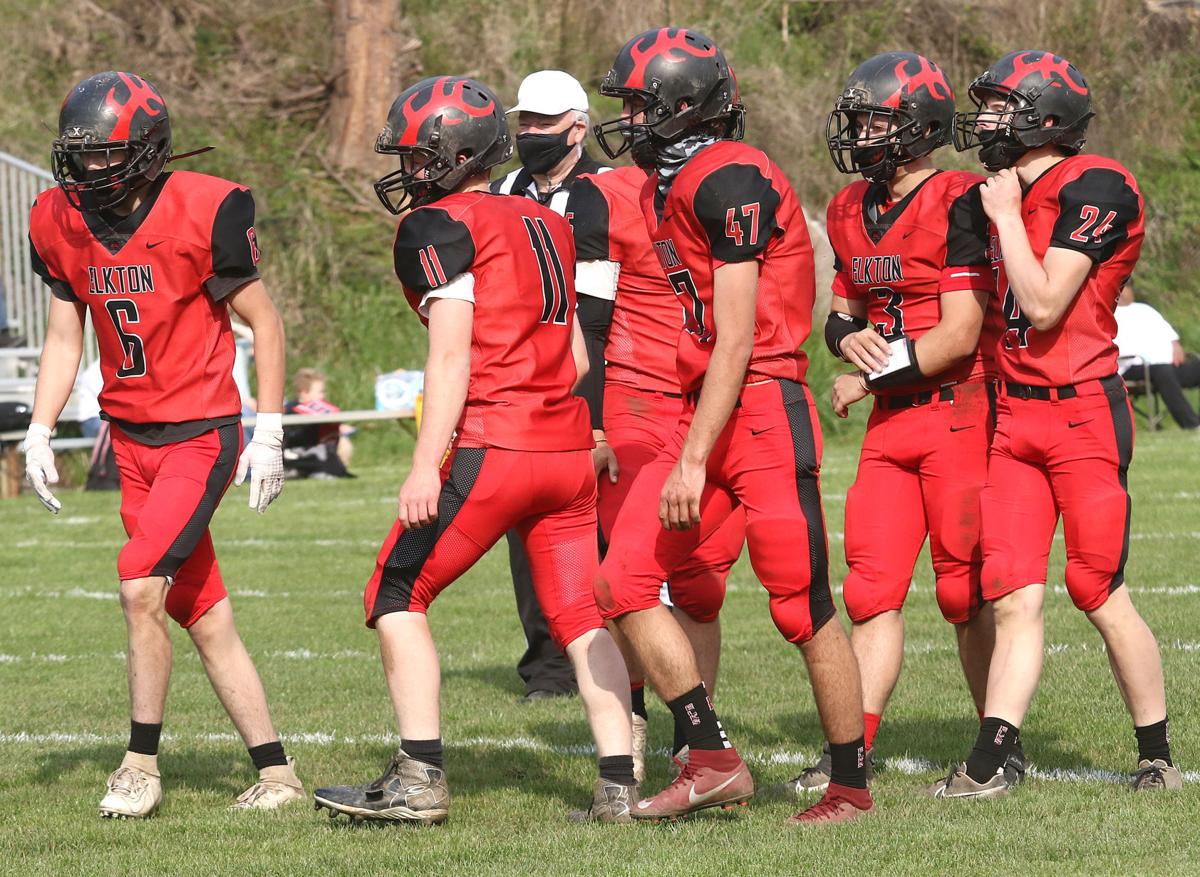 The Elkton Charter School football team comes out of a huddle during first half play against Siletz Valley in Elkton on Friday.

Elkton Charter School football head coach Jeremy Lockhart speaks with players during a timeout in their game with Siletz Valley at Saladen Field in Elkton on Friday.

The Elkton Charter School football team comes out of a huddle during first half play against Siletz Valley in Elkton on Friday.

ELKTON — The Oregon School Activities Association sanctioned a fringe sport known as six-man football from 1947-1959, awarding a state championship to those schools struggling with enrollment numbers and player availability.

During the OSAA’s adjusted winter/spring Season 2, there are 18 schools in Oregon participating in six-man football. And, for the first time in Douglas County since 1959, the Elkton Elks agreed to wade into that pool.

“It wasn’t the most popular decision, but it was the right decision,” Elks head coach Jeremy Lockhart said Friday. “Otherwise, we’re not playing right now.”

The Elks, who are 2-2 on the season, will host Eddyville Charter in an OSAA Culminating Week game at 4 p.m. next Friday. By the end of April, at least two other Douglas County high schools will have a difficult decision to make, and the long-time bitter rivals are stuck in a tight spot.

When the OSAA announced that there would be a winter/spring football season, Yoncalla and North Douglas both had a problem with a lack of players coming out for football. In fact, each school had nine players apiece at the start of the season. It was too late to commit to six-man.

Instead the two schools, which historically have had no love lost for one another, joined forces to form the Yoncalla/North Douglas War Eagles for an eight-man football season.

The rivalry, however, has changed a little.

“If the co-op between us and Yoncalla hadn’t been approved, we were headed (for six-man),” Mast said. “Right now, we’re not sure where we’re going to go.”

Bragg said that while this season has been enjoyable, there is a difficult decision to be made: if the schools remain as a co-op, combined enrollment numbers would force the OSAA to designate the Yoncalla/North Douglas cooperative as a Class 2A school playing 11-man football.

“We would like to keep it together, but there are a lot of logistics involved,” Bragg said. “If we stay together, we would have to play 11-man, but if we go separate, we would both probably have to go to six-man and I don’t think either of us want to do that.”

The rules of six-man football are not that dissimilar to a neighborhood football game:

Lockhart said the hardest part was convincing Elkton fans that it was still football.

“The biggest adjustment off the field was convincing people that it was still football and it’s still fun,” the Elkton coach said. “I had to do a lot of homework and research as far as what could I do, what should I do.

“It’s been fun. Throw back here, pitch there, crazy formations. It’s been a blast.”

Elkton senior Cooper Peters was a little hesitant at first.

“I’d never watched a six-man game before,” Peters said. “Once we started doing things, it got fun. I don’t think it gets the respect it deserves. It’s pretty exciting.”

Brandon Bowen played for the Elks in the early 2010s. Friday, which was senior night for Elkton, was his first experience seeing six-man.

The history of six-man football in Douglas County is largely unremarkable.

The OSAA brought back six-man football for the 2018 season, with 14 schools competing in two special districts in western and Eastern Oregon, but without an officially recognized state championship playoff.

Presently, 18 teams are competing at the six-man level: 10 in western Oregon and eight in Eastern Oregon. The drop to six-man has helped to eliminate some cooperatives, especially on the eastern side of the state. Schools which would partner to field an eight-man team can now field their own individual six-man teams.

Though, as numbers dwindle — a trend which has been accelerated by the coronavirus pandemic and distance learning — more smaller schools may be headed toward the six-man realm, or scrapping their football programs entirely.

Maintaining cooperatives, however, is a dilemma schools like Yoncalla and North Douglas will have to sort out in the very near future.

“Individually, schools get to keep their identity,” Mast said. “This isn’t just affecting this year. It’s going to affect 2022 as well.”