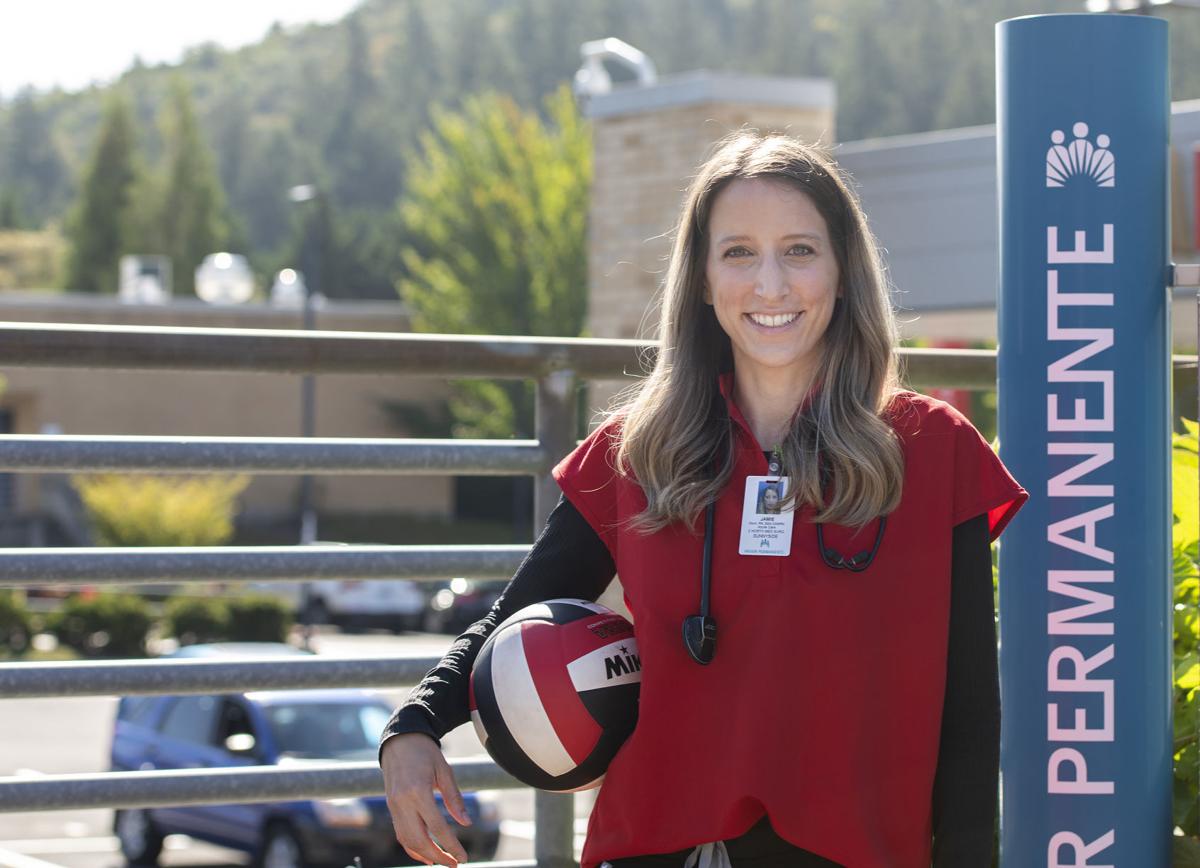 Jamie Dunn poses for her portrait outside of Kaiser Permanente Sunnyside Medical Center in Clackamas on Aug. 24, where she works as the head nurse in the surgical center. Dunn is a former standout athlete from Days Creek High School, where she won a pair of state championships while playing on a volleyball team that won 54 consecutive matches. 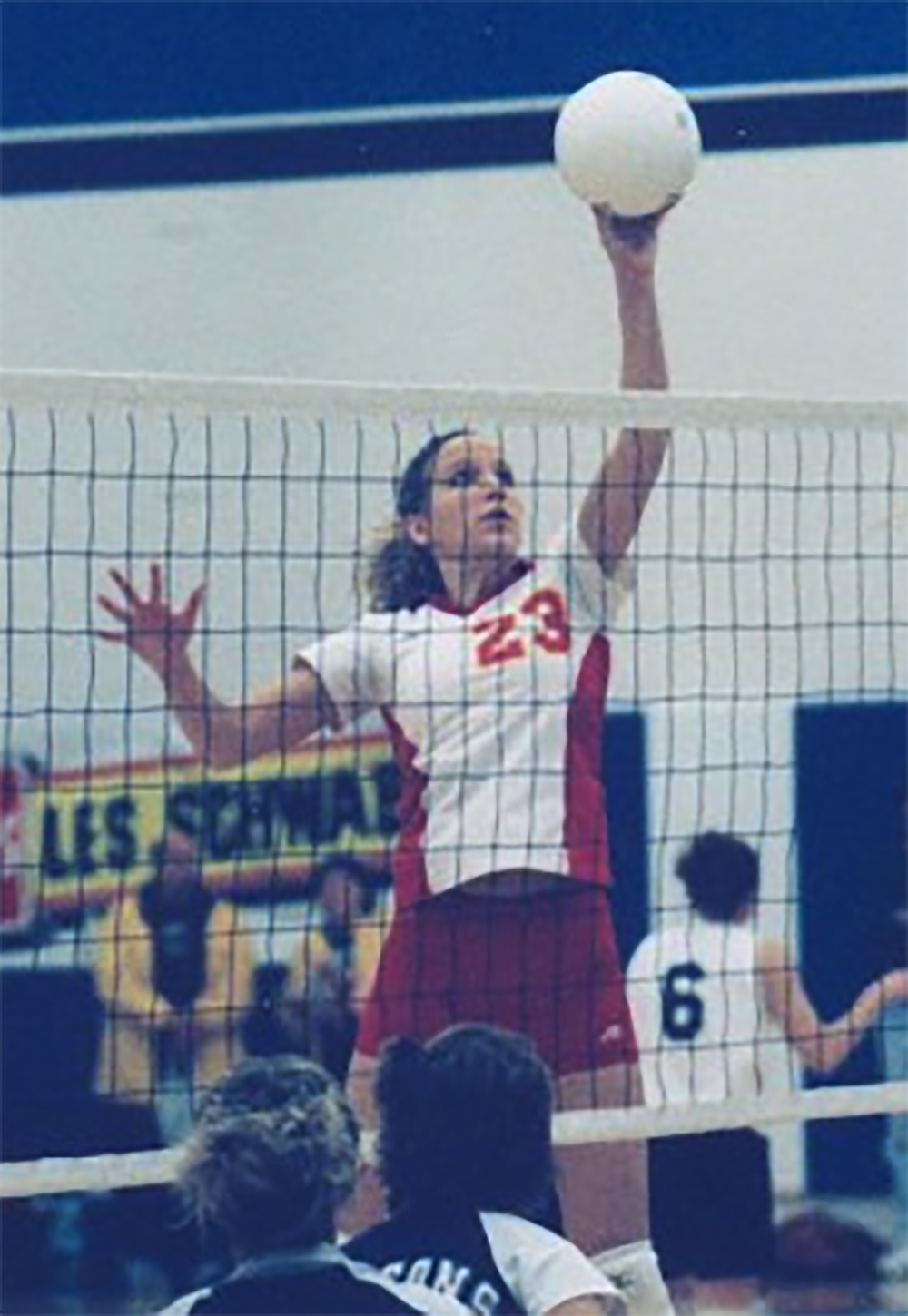 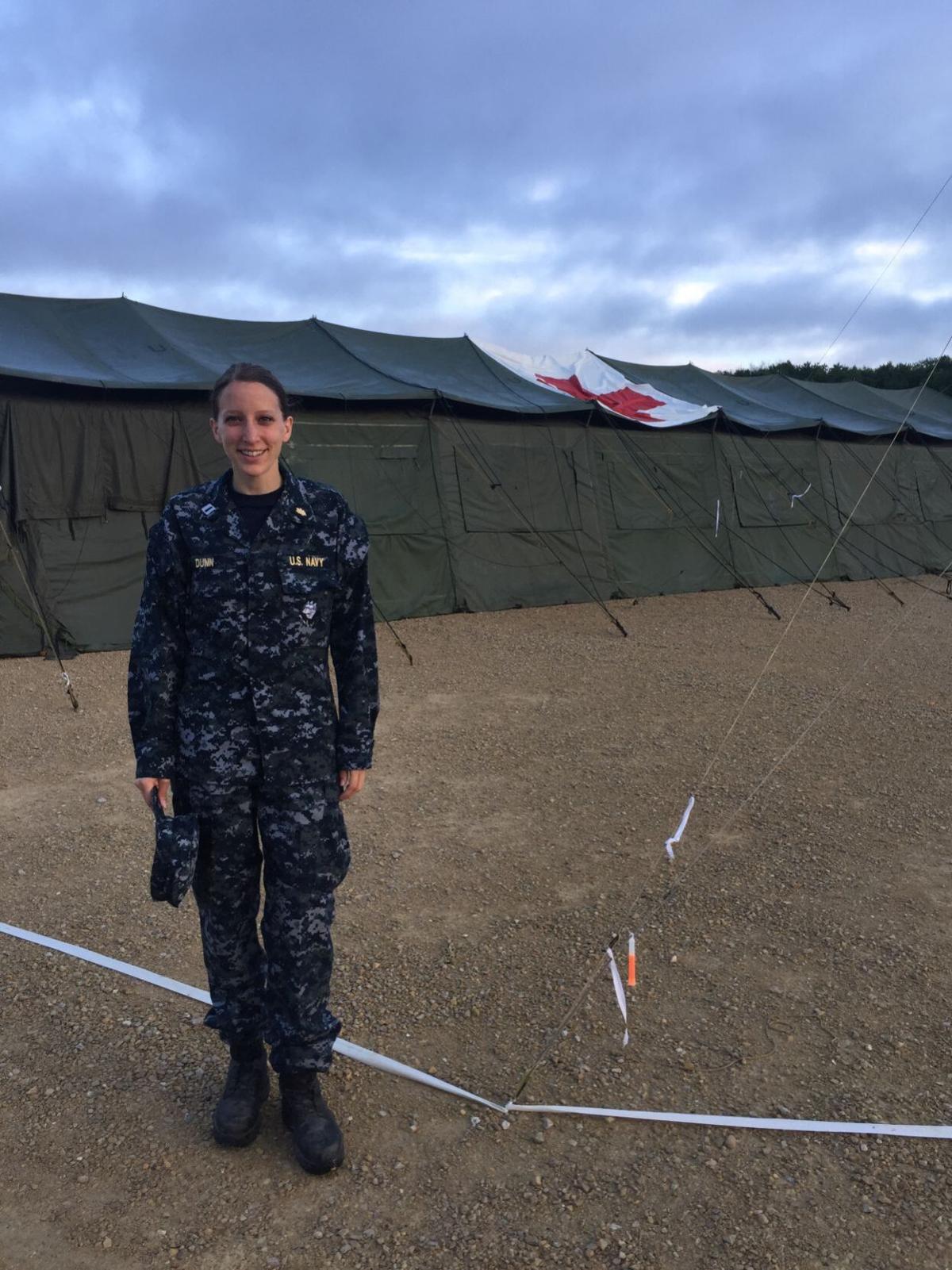 Jamie Dunn poses next to a medical tent she helped construct during a field exercise in Fort McCoy, Wisconsin. Dunn achieved the rank of lieutenant in the United States Navy Reserves, and her seven-year stint included an eight-month deployment at Guantanamo Bay in Cuba.

Jamie Dunn poses for her portrait outside of Kaiser Permanente Sunnyside Medical Center in Clackamas on Aug. 24, where she works as the head nurse in the surgical center. Dunn is a former standout athlete from Days Creek High School, where she won a pair of state championships while playing on a volleyball team that won 54 consecutive matches.

Jamie Dunn poses next to a medical tent she helped construct during a field exercise in Fort McCoy, Wisconsin. Dunn achieved the rank of lieutenant in the United States Navy Reserves, and her seven-year stint included an eight-month deployment at Guantanamo Bay in Cuba.

Just like she was as a student-athlete in Douglas County, Jamie Dunn is always on the go.

In a way, it only makes sense that the 2004 Days Creek High School graduate would still be that way.

“To be honest, I can’t think of a time when she wasn’t always doing something,” Ron Dunn, Jamie’s dad and former volleyball coach, said with a laugh. “Just by that virtue along with her competitive spirit. Both of those were second to none, and that attitude was infectious to everyone around her.”

No doubt, it’s hard to find spare time as a four-sport athlete an an honor-roll student in high school. With that background, it makes sense that she’s served as a commissioned officer in the Navy Reserves and a supervisor at one of the largest hospitals in the Portland-metro area.

“I guess I can consider myself incredibly lucky that I always got to be in sports from the time I was a little kid,” the 34-year-old Jamie said. “I was always busy, and I guess it instilled a really good work ethic. I’d really like to think the kind of work ethic I had in high school I carried over into my working life.”

Jamie Dunn’s working life now is as a charge nurse at Kaiser Permanente Sunnyside Medical Center in Clackamas where she supervises a staff of 22 in the facility’s surgery center, with as many as 12 on shift at a time. And even though she’s listed as an inactive reserve in the Navy, she reached the rank of lieutenant — or O3 — over eight years and had one overseas deployment.

She now resides in Camas, Washington, with her longtime boyfriend, Galen Maze-Rothstein, and their dogs Nyla and Buster. And since she wasn’t busy enough without the Navy in her life in the early part of the year, she joined a women’s volleyball league in Vancouver.

There, she played on an unbeaten team as an outside hitter, and the team’s setter happened to be South Umpqua graduate Jamie Ackerman, the former Jamie Brinkerhoff. They reached the league championship match, but it was canceled in March because of distancing restrictions associated with the current coronavirus pandemic.

Dunn, however, is pretty familiar with playing on championship volleyball teams.

During her junior and senior years, she played on a Days Creek squad that won two consecutive Class 1A state championships and combined to win 54 consecutive matches. During her senior year in 2003, the Wolves finished 34-0 and lost two sets all season: one in a road match at Elkton and the other in the Class 1A semifinals against Dufur before beating Elkton for the state title.

Along with Kathryn Mariner — the former Kate Ludwig — she earned first-team all-tournament recognition at the state volleyball tournament in Springfield and earned second-team recognition as a sophomore. She was also part of three teams that reached the Class 1A state basketball tournament in Baker City and was an eight-time medal winner at the state track and field meet, including three runner-ups and a third-place finish in the triple jump.

All the while, she was the softball team’s primary pitcher, which helped her accomplish the rare feat of winning 16 varsity letters in high school.

“It was always so much fun to watch her compete,” Ron Dunn said. “And she’s never really stopped.”

After she graduated from Days Creek, she attended Southwestern Oregon Community College in Coos Bay for one year before she transferred to the University of Utah where, in 2009, she earned her nursing degree. She came back to Oregon and had brief stints at CHI-Mercy Medical Center in Roseburg and Good Samaritan Medical Center in Corvallis before landing her current gig in Clackamas.

That wasn’t enough, though, and in 2012 she joined the Navy reserves.

“I guess it was just a way to challenge myself and try something new and exciting, I guess,” she said with a laugh. “I’m really glad I did, because I’ve picked up some great leadership skills and have met some really great people.”

Some of those she met during a two-week field-exercise training at Fort McCoy, Wisconsin, where she helped set up hospital tents and did simulations for running a field hospital for soldiers who were wounded in combat.

One of her more memorable experiences came in 2014 when she was deployed for eight months as part of a medical group at Guantanamo Bay in Cuba.

In turn, that high-pressure atmosphere also helped her take charge during the current coronavirus pandemic. She said the biggest challenge has been adjusting to the constantly fluid health and safety restrictions and recommendations being put in place at the state and federal level. Dunn said when the pandemic first started in March, she had to work with her staff to make room in the surgery center for the surge of cases the hospital expected to see.

“Thank God we didn’t see that,” she said. “But now there’s a lot of extra work because of (COVID-19) testing and all of these extra factors you have to consider now. It’s also a stress to the staff because they’re worried about (PPE) shortages and being exposed to the virus.”

It’s through these concerns she’s addressed that have helped her continue earning recognition in her profession. She’s won the Daisy Award — an acronym for Diseases Attacking the Immune System — which is awarded when a patient or co-worker nominates a nurse who they feel has had a positive impact on someone. She has also earned her medical-surgical nursing certification, and she has been was nominated for the March of Dimes Nurse of the Year in the adult acute care category.

Her father and others who have accompanied her to athletic competitions would be quick to point out how her compassionate side, along with her competitive side, make her a shoo-in for that kind of recognition.

Jamie Dunn doesn’t see it that way. She credits everyone else.

“It was all fun,” she said. “Just our class, our teammates and our amazing community that would show up to all of our games and meets and made things really special. That helped me do this.”

High school highlights: Was part of a Days Creek volleyball team that won 54 consecutive matches and two consecutive Class 1A state championships. Selected first-team all-tournament both years. ... Was a four-sport athlete who lettered four times in softball, volleyball, basketball and track and field. ... Was part of girls basketball team that reached the 1A state tournament three times and finished fourth her senior year. ... Was an eight-time podium finisher in track and field, including three runner-up finishes in the triple jump as a sophomore, junior and senior.