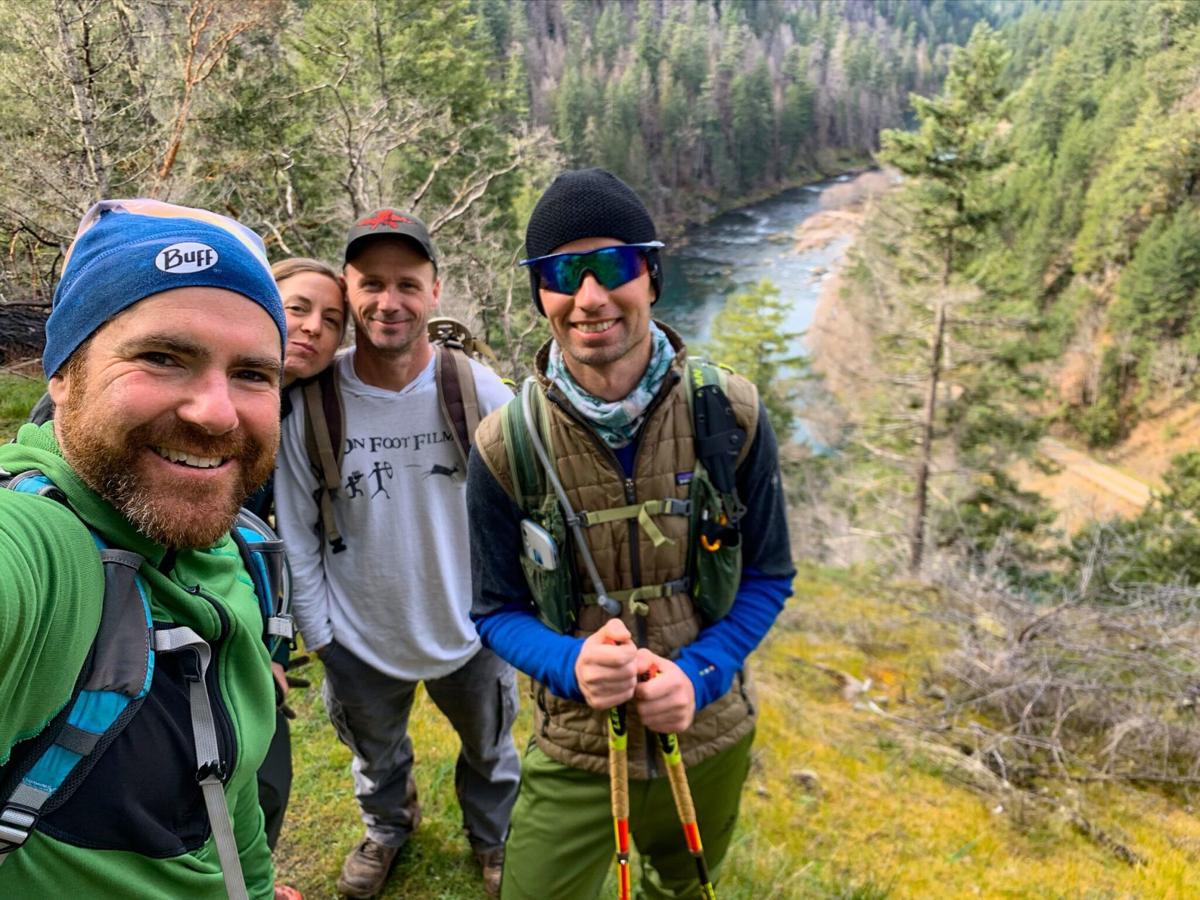 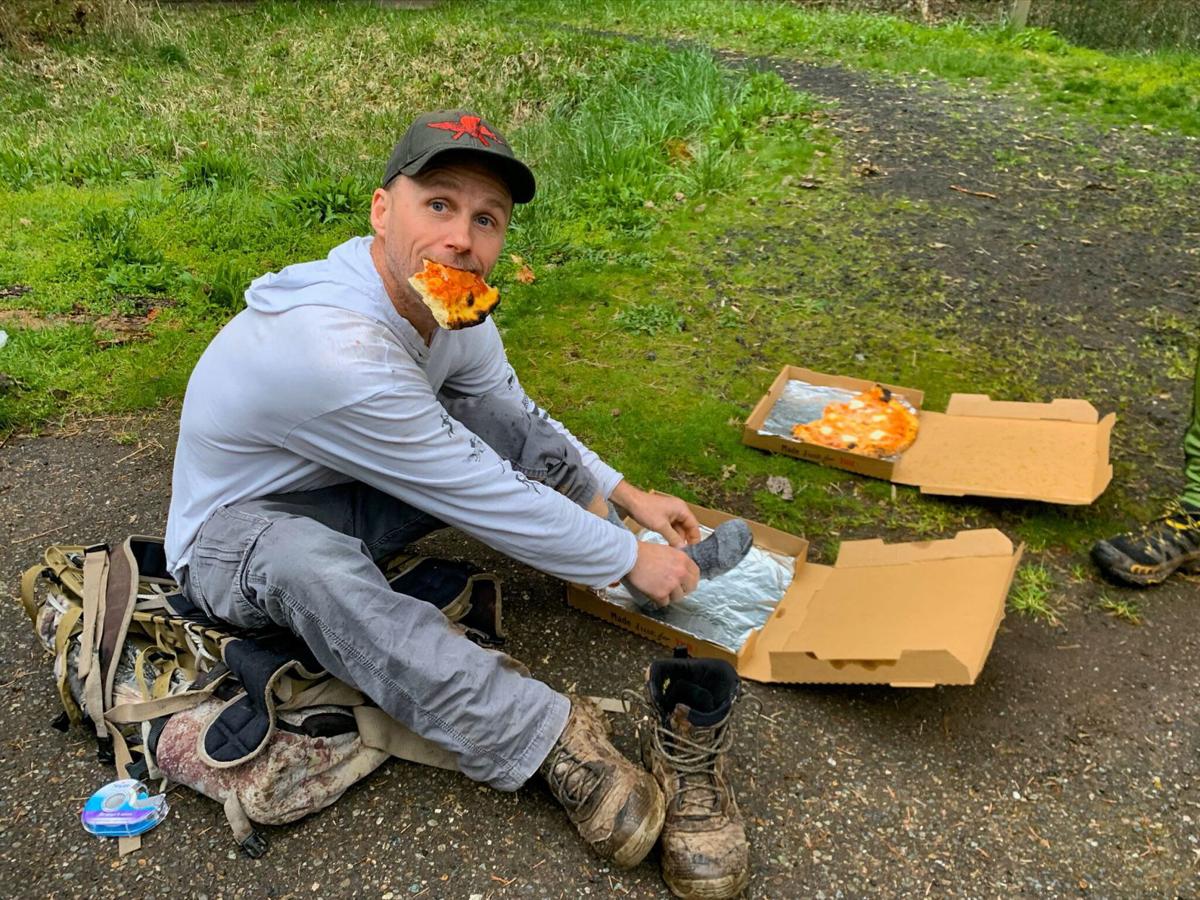 Jaysen Dunnavant, a 1994 Glide grad, refuels during a brief break in a 33.5-mile hike of the North Umpqua Trail Sunday as part of a fundraiser for the Glide High School track renovation project. 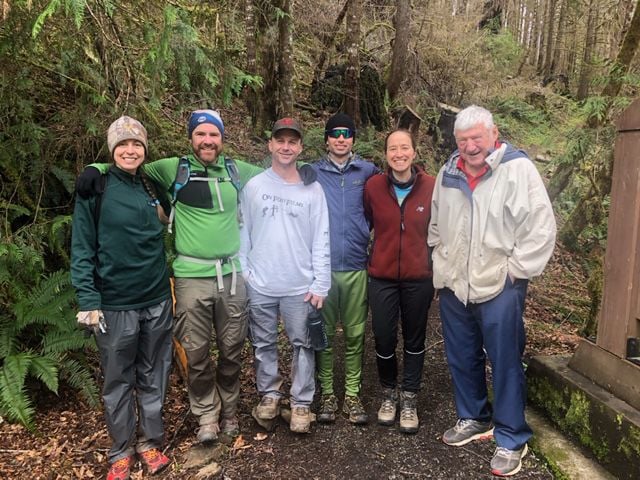 Former Glide track athletes Heather Barklow (from left), John Waller, Jaysen Dunnavant, Abe Long and Kelli (McManus) Long were greeted by former head Glide track coach Maynard Mai at one of their stops during a 33.5-mile trek along the North Umpqua Trail in an effort to raise money for the Glide Track Renovation Project on Sunday.

Jaysen Dunnavant, a 1994 Glide grad, refuels during a brief break in a 33.5-mile hike of the North Umpqua Trail Sunday as part of a fundraiser for the Glide High School track renovation project.

Former Glide track athletes Heather Barklow (from left), John Waller, Jaysen Dunnavant, Abe Long and Kelli (McManus) Long were greeted by former head Glide track coach Maynard Mai at one of their stops during a 33.5-mile trek along the North Umpqua Trail in an effort to raise money for the Glide Track Renovation Project on Sunday.

Dawn had yet to break over the Cascade Mountain foothills as John Waller, Heather Barklow, Jaysen Dunnavant and Abe Long gathered at the Swiftwater Park trailhead of the North Umpqua Trail Sunday morning.

Waller’s vehicle had already been staged at the Marstens Bridge trailhead near Twin Lakes, some 33.5 miles away. Kelli (McManus) Long brought Waller back with a white Toyota Tacoma, which would serve as the foursome’s support vehicle. On board with Kelli were a whopping 10 pizzas.

As 7 a.m. neared, another vehicle pulled up to the Swiftwater trailhead. Out of the vehicle emerged 86-year-old Maynard Mai, who headed Glide’s track and field program for over three decades.

The North Umpqua Trail was no stranger to Waller, Barklow, Dunnavant and Long in part because of Mai, who would send his cross country teams on runs along the scenic pathway for training.

“It just added a fundamental value to the whole thing,” Dunnavant said of Mai’s arrival. “I almost expected him to pull his bicycle out of the truck.”

“When I think of my youth in Glide and growing up in athletics, he was always the fixture,” said Barklow, a Class of 1996 Myrtle Point graduate who participated in track and cross country at Glide. “His impact was one that a lot of track athletes don’t always get from their coach.”

After a brief walk down memory lane and a few photos, the foursome hit the trail, a venture which would not end until almost 8 p.m.

But 13 hours on the NUT proved to be even more fulfilling than the original plan: 200 laps — 50 miles — on the GHS track.

“When you leave the North Umpqua for a while, you see it with an entirely new set of eyes,” said 1994 grad Waller, who runs the film company Uncage the Soul Productions, based in Portland. “The testimony to how special this place is is when you see it in a coffee table book in a coffee house in Germany.”

Waller and Barklow had spearheaded the original idea of a walk-a-thon at the GHS track to help the Glide Booster Club complete its goal of raising nearly $360,000 for a total renovation of the track complex. That included not only removing the track’s rubber surface, but also pulling out and replacing the cracked concrete base.

As fears of the COVID-19 coronavirus grew — Waller himself was concerned due to the number of people he had been in contact with in Portland — those plans shifted to their high school home away from home.

“It didn’t really matter where we did it and it didn’t matter how far,” Waller said. “It was just about honoring the huge amount of support the community had offered for this cause.”

When the effort was scheduled for the GHS track, Waller had been leaning on lifelong friend Dunnavant — a 45-year-old Marine and electrician — to be a part of it. Not necessarily to raise money, but to spend the day with his buddy.

“When he told me what the new plan was, my immediate reaction was, ‘I’m not walking to Toketee!’”

Those 10 pizzas were now down to six.

When the group reached the Panther Creek Trailhead at Horseshoe Bend, the wear was beginning to show. Dunnavant had learned that the old knee wasn’t quite what it used to be, but it certainly wasn’t dampening his spirits.

“Jaysen was our comedic relief,” Barklow said with a laugh. “We weren’t going to ditch him.”

“I don’t feel like I have to prove anything anymore, but I wasn’t going to bail on these guys,” Dunnavant said with a smile.

The journey along the North Umpqua River was much more arduous than 200 laps around a flat track. And the original 12-hour timeline turned into the group finishing their venture in the dark

“We just pulled out the head lamps and pushed on,” Barklow said.

The group ended near Twin Lakes, a place where Waller and Dunnavant could tell stories for days.

“The end result being Marstens Bridge, we’ve had some amazing times up there,” Dunnavant said with a laugh. “We’ve had a heck of a lot of adventures up there, also associated with pain.”

For Barklow, if was more than just a chance to reconnect with old teammates.

“I’ve still got it. We all do. It’s just nice to be able to do something that let’s you know you’re still alive,” she said. “It’s good to know you can still persevere, push through something. It’s like 35 miles? You got this.’”

And the next morning?

Added Dunnavant: “This has been going on for 35 years, because of a guy named John Waller. I’ve always thought a lot of him. He’s always had good ideas, and they always had something to do with pain. So really, nothing has changed.”

For Waller, encapsulating the walk in a single statement would have cheated the effort.

“This was more than just raising money for the track. It was about infusing some energy into a community that really needs a lift,” Waller said. “Glide is a struggling community, and the track is such a central part of that community.

“We did a thing and raised a little money, but it’s such a small slice of the pie.

“I was really motivated to give back to a place that had given so much to me as a kid.”

(Editor’s note: As a result of their months-long effort, the group raised an estimated $8,000, which through the help of a dollar-for-dollar match by the Oregon Community Foundation, meant $16,000 toward the Glide Track Renovation. Donations are still being accepted, and can be made directly to the Glide Booster Club, P.O. Box 244, Glide, OR 97443.)