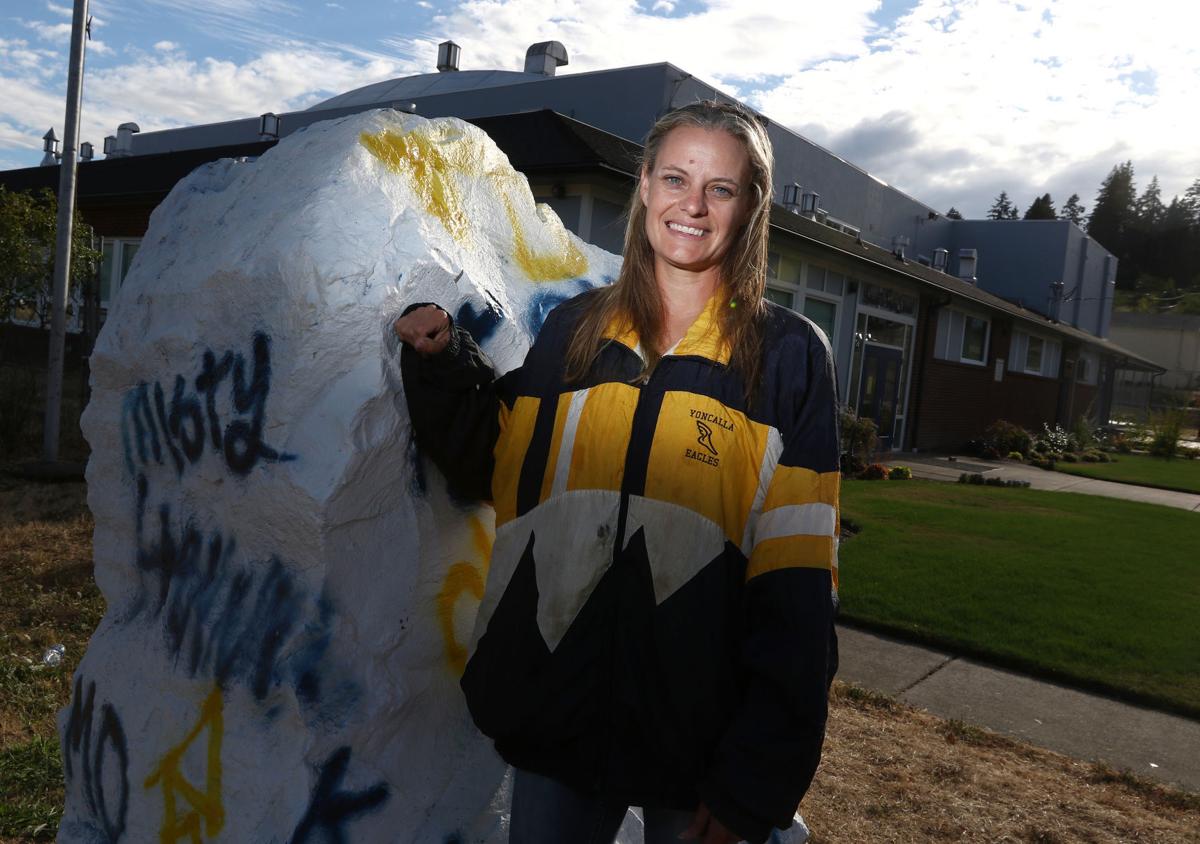 Yoncalla High School alum Maranda Brownson poses at the school on Aug. 20. Brownson was a track and field standout for the Eagles, graduating in 2001. 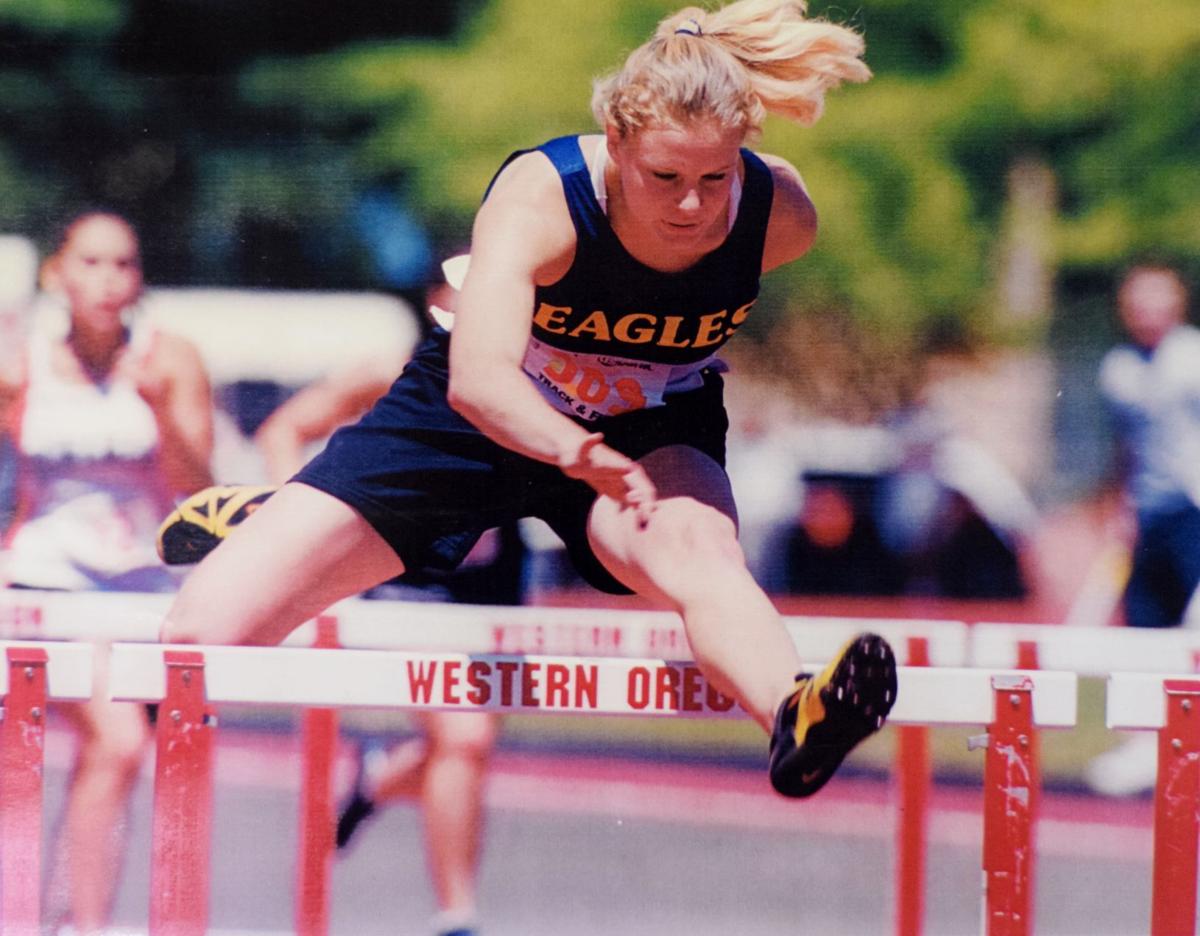 Yoncalla’s Maranda Brownson clears a hurdle in the 100-meter hurdles on her way to a state title in 2000. Brownson won four state titles in the event and became the first athlete in Oregon history to earn 16 individual state track and field titles. 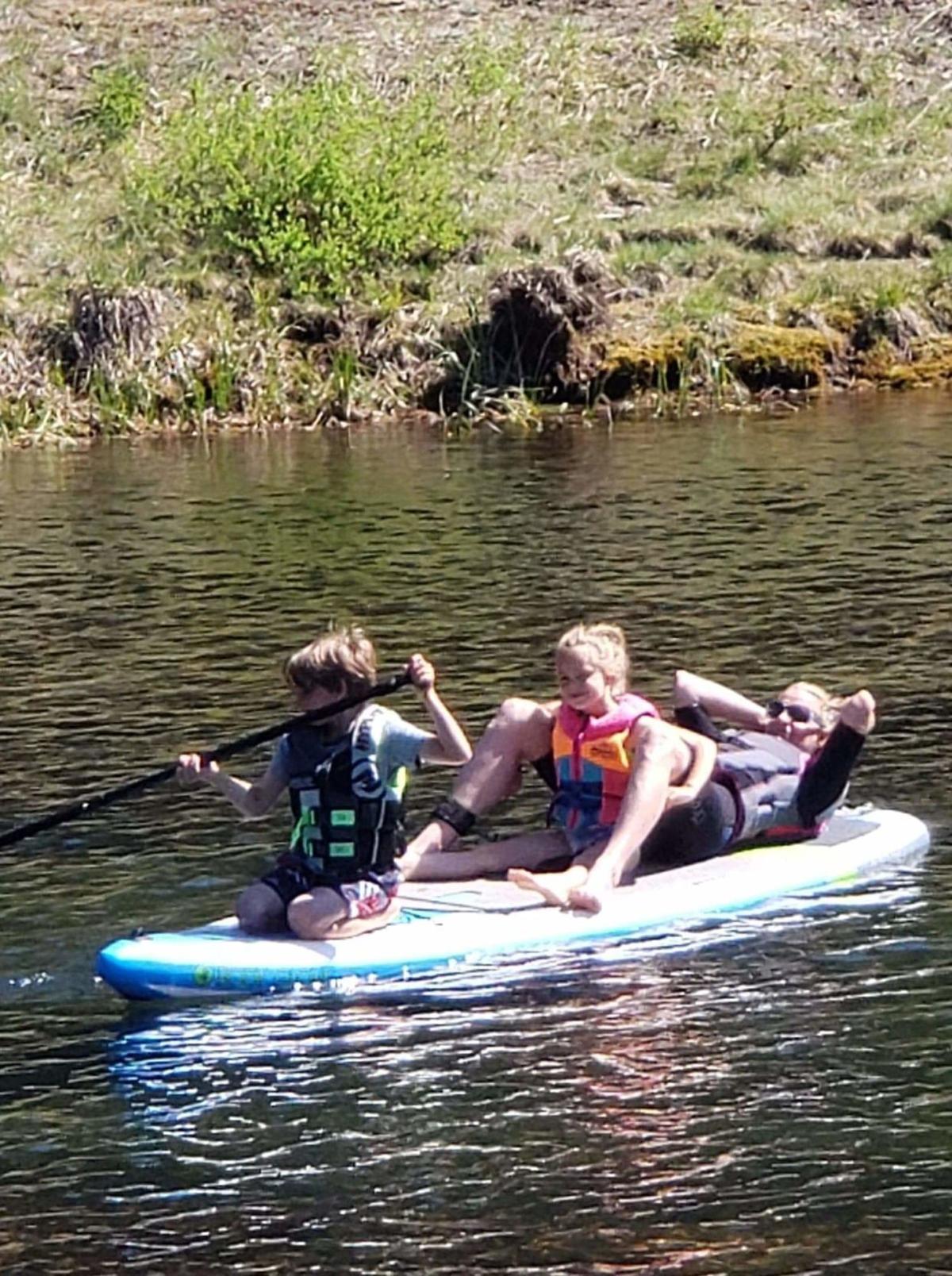 Maranda Brownson enjoys some time outdoors with her children Danner and Carly. 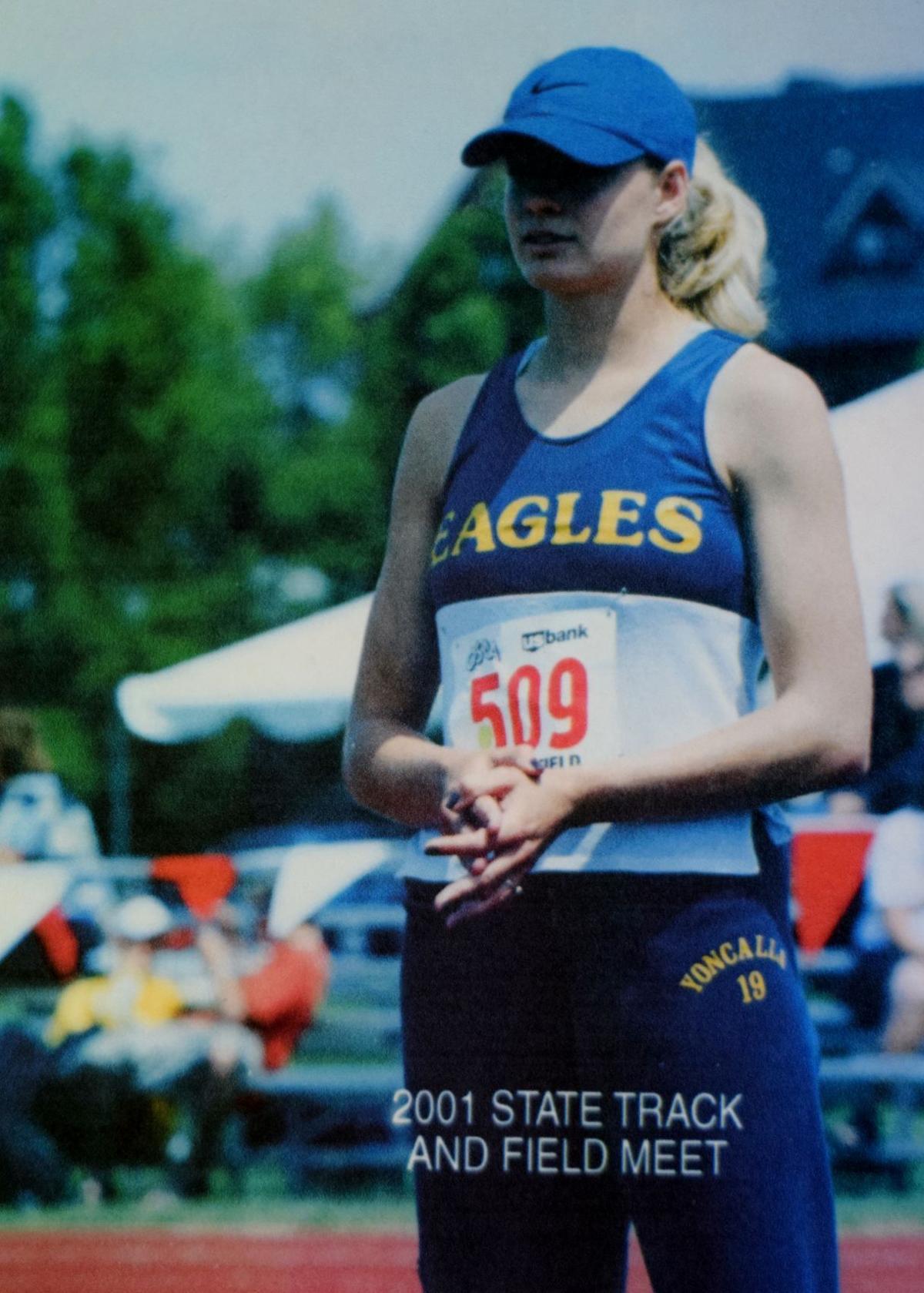 Maranda Brownson gets ready to compete at the Class 2A state track and field championships at Western Oregon University in Monmouth.

Yoncalla High School alum Maranda Brownson poses at the school on Aug. 20. Brownson was a track and field standout for the Eagles, graduating in 2001.

Yoncalla’s Maranda Brownson clears a hurdle in the 100-meter hurdles on her way to a state title in 2000. Brownson won four state titles in the event and became the first athlete in Oregon history to earn 16 individual state track and field titles.

Maranda Brownson enjoys some time outdoors with her children Danner and Carly.

Maranda Brownson gets ready to compete at the Class 2A state track and field championships at Western Oregon University in Monmouth.

For those who followed Douglas County high school sports in the late 1990s and early 2000s, you probably remember Maranda Brownson’s name.

The 5-foot-9 Brownson never finished second in the Class 2A state track and field meet before graduating from Yoncalla High School in 2001.

She qualified for state in four individual events each season for four years and never lost an event, becoming the first Oregon prep track athlete to win 16 individual state titles. Her 160 points scored at state still tops all classifications to this day.

“I think it’s easier to appreciate now because it’s been so long,” Brownson said of her track achievements in a recent interview. “I didn’t understand how great it was until I saw how it wasn’t duplicated.”

Nineteen years later at the age of 37, Brownson’s priorities lie with her family and two children. She’s the mother of Danner, 10, and Carly, 7. Brownson is divorced after being married for six years, but has been dating Kevin Noonan of Eugene for about a year.

“They’re just close enough in age that they get along really well,” Brownson said of her kids. “They’re a lot like me and not like me, so we challenge each other. My son is probably the most compassionate. My daughter is a little more sassy and her grace comes a little harder.

“They like to swim and play. My daughter figured out how to hurdle by accident, and there’s some potential there. My son is a swimmer, but wants to play basketball.”

Brownson’s work during the day centers around young children. She’s been a daycare provider out of her Roseburg home since 2016.

“I worked way too much after my second baby (Carly) was born,” Brownson explained. “I was having a hard time with daycare, I’d get phone calls and cancellations and couldn’t understand her when she spoke to me. I decided I’d look into daycare (with myself) and I love it.

“I love helping little ones learn. My favorite age group is 1-4 because they know how to talk. I’ve gotten to see my kids get on and off the bus every day. It works out great.”

Being a mother is a 24/7 job. Brownson feels the discipline and work ethic she gained as an athlete — first at Yoncalla and later at University of Nevada in Reno — has helped her deal with today’s daily challenges.

“You have to give up so much to compete at a high level,” Brownson said. “You have to be committed to training — have to train with a purpose. You can’t just go through the motions. You’re a competitor, and have to think about what your weaknesses are.

“Being a mom and being tired, especially when my kids were younger, it’s kind of the same thing. You have to keep your posture and stay focused on what’s important. Being surrounded by people who helped me be successful taught me a lot of valuable things that I didn’t know I was going to use later on.”

Brownson credits the likes of Tom Derbyshire, Bill Spelgatti, Mike Bober, Cindy Taylor and Cheryl Simons as influences for her development as an athlete. She added her father, Carl, was her biggest supporter.

Spelgatti who died in 2015, was better known as a basketball coach but worked with Brownson in track.

“He (Spelgatti) agreed to coach me, which was the greatest news ever because I was having a hard time training by myself,” Brownson said. “He taught me that life is 10% what happens to you and 90% is how you react to it. He never let me give up. It was always one more time, let’s try it again. He was engaged in what I was doing.

“Right before high school, Tom Derbyshire got me to realize that I had a chance to be a good athlete. He coached me all through middle school. When he handed me off to Mike Bober (a coach with Oregon South Track Club in Roseburg during the summer), I really started to learn the opportunities of a bigger school, a better track.

“They were kind enough to take me on, even though I wasn’t on their actual (spring) team. Cindy Taylor (a track coach and English teacher at Yoncalla) helped me all through my freshman year, keeping me grounded and focused. Cheryl Simons (my basketball coach) always reminded me to enjoy the moment.”

When it came to the big meets in track, Brownson was pure clutch.

She earned state titles in six events: She won the 200 meters and 100 hurdles four times apiece, finished first in the long jump three years, was a two-time champ in the triple jump and high jump and won the 100 once.

“My freshman and sophomore years we had a team and wanted to win,” Brownson said. “We had the other events covered, so I ran the 100. My junior and senior years we went with what I would be the most successful in, and I was training to be a heptathlete.”

“I did my first heptathlon the summer before my freshman year,” Brownson said. “I was so bad at the javelin. They had a book that has all the scores in it, and they had a separate sheet for the javelin. I think my sophomore or junior year I made the book, and dad was excited.”

She was honored as the Female Prep Athlete of the Year at the Oregon Sports Awards in 2001.

“When that was presented to me, it showed I could compete,” she said.

Brownson was also a standout for the Yoncalla girls basketball team, leading the Eagles to third place at the state tournament in 2000. The Big Fir League MVP scored 74 points in four games (making first-team all-tournament) as the Eagles finished with a 24-5 record.

“We loved basketball and were really competitive,” Brownson said. “We were short and low in numbers. I was the tallest one on the team.”

Brownson received a track scholarship from Nevada and was a heptathlete there. She ranks sixth on the school’s all-time list with a score of 5,283 points set in 2004. She won the Western Athletic Conference indoor pentathlon (five events) championship that year with 3,899 points.

“I had some really good teammates and had an amazing coach (Joe Blaney) in college,” Brownson said. “I battled some injuries my sophomore year.”

After graduating from Nevada with a bachelor’s degree in English, Brownson returned to Douglas County and coached the Yoncalla girls basketball team for one year. The Eagles finished 6-17 overall during the 2005-06 season.

“It was pretty fun,” Brownson said. “I got to learn a lot about the basics, and about my version of competition against other versions of competition. We weren’t very successful, but toward the end they were better than when they started.”

Brownson misses the athletic competition. She enjoyed being a fan of the Oakland High School boys basketball team the past couple of years with her nephew, Colton, starring for the Oakers.

“I’d never thought I’d cheer for Oakland (which was a rival in high school),” she said with a smile. “But Oakland has such a small town feel and they celebrate their kids. Letting my kids see that has been really good for me.”

High school highlights: Won 16 individual state titles in track and field at Yoncalla, four apiece in the 200 meters and 100 hurdles ... was selected Big Fir League MVP in basketball, leading the Eagles to third place in the Class 2A state tournament in 2000.