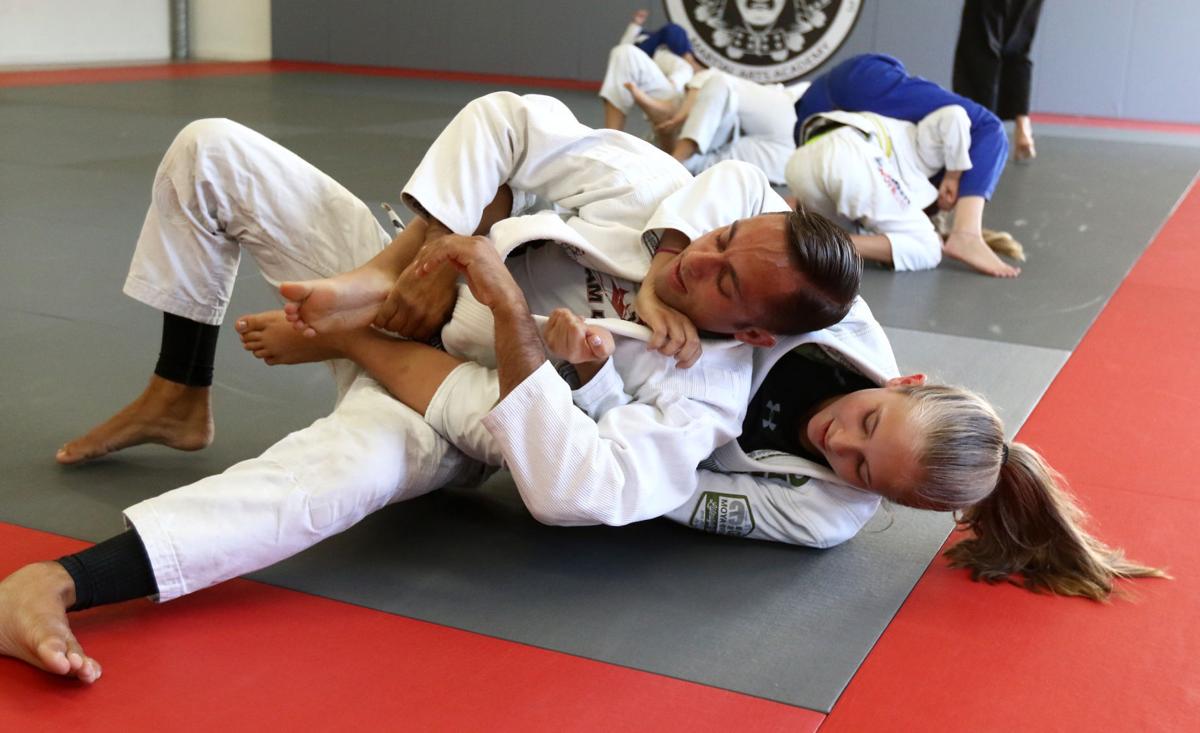 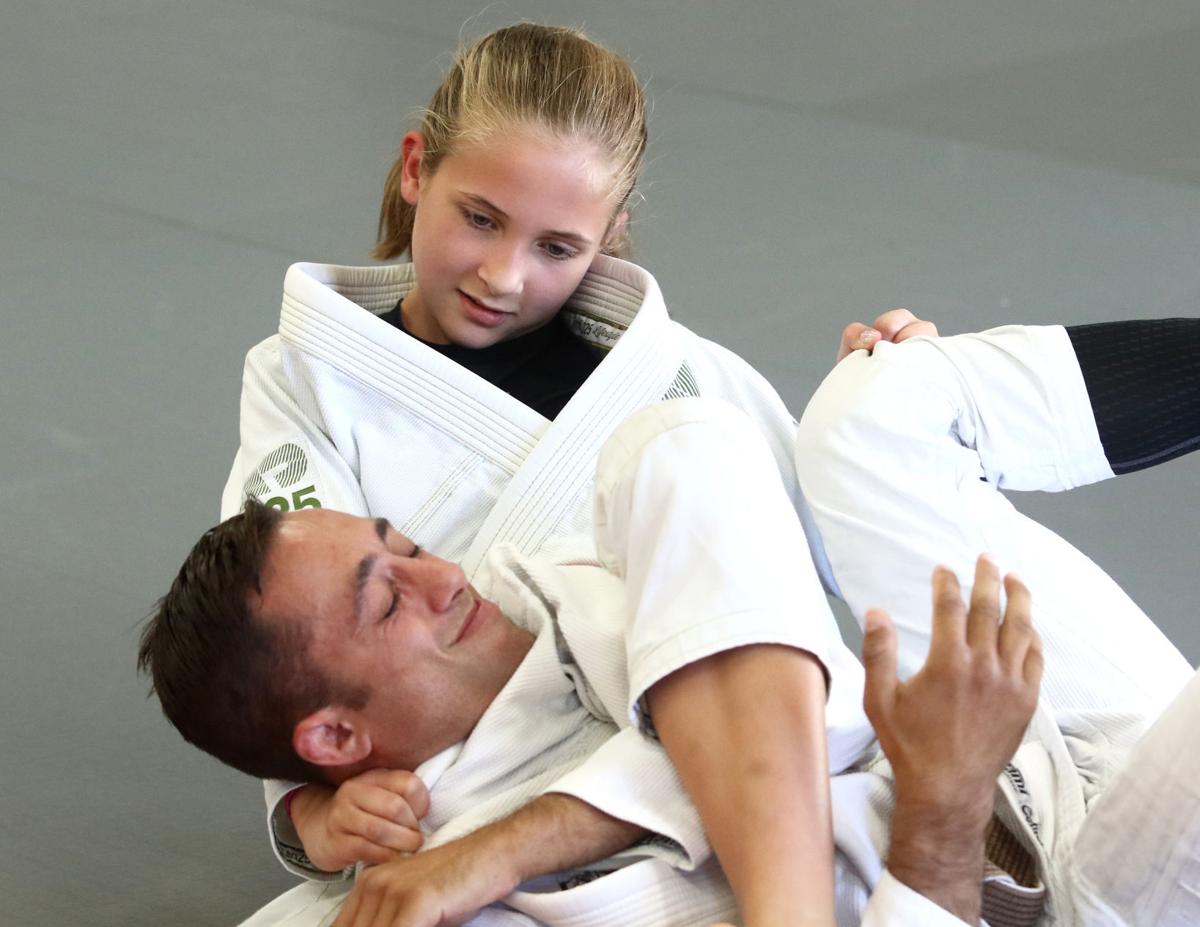 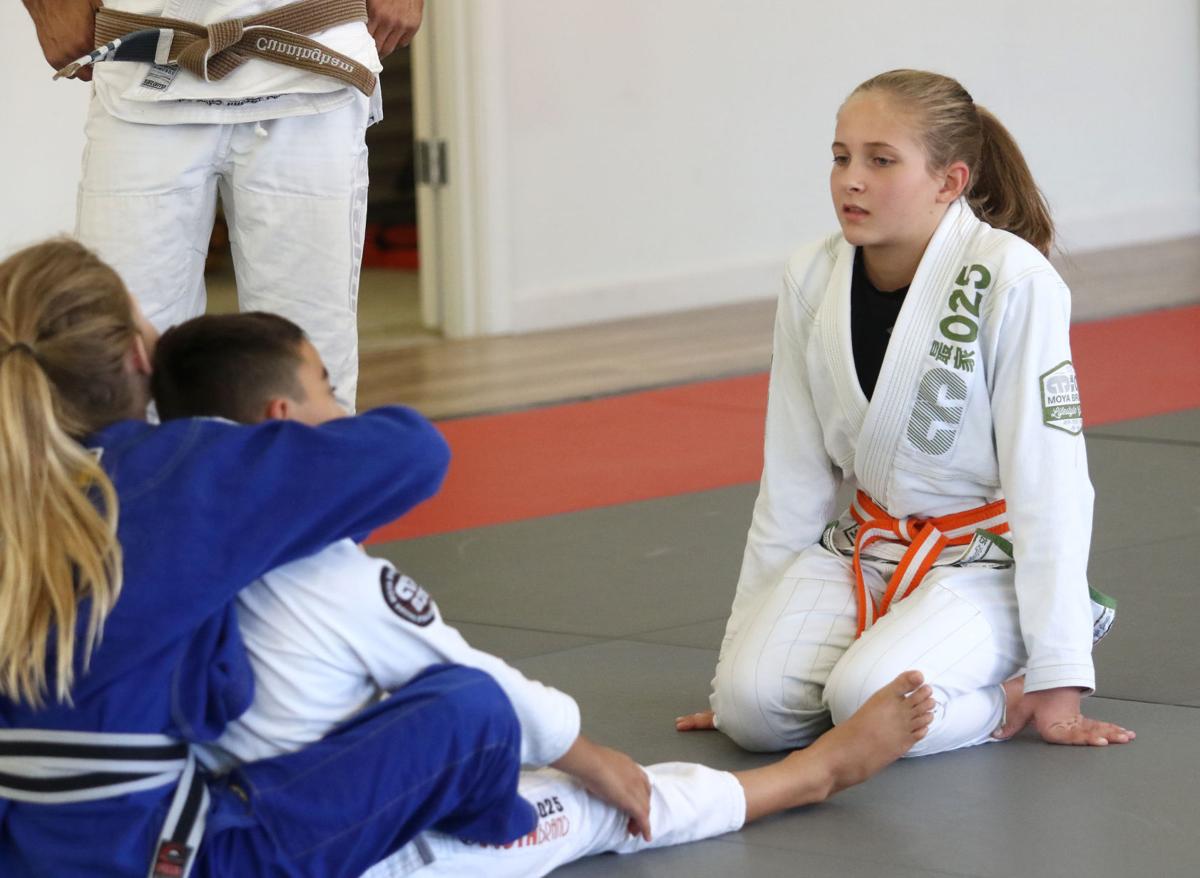 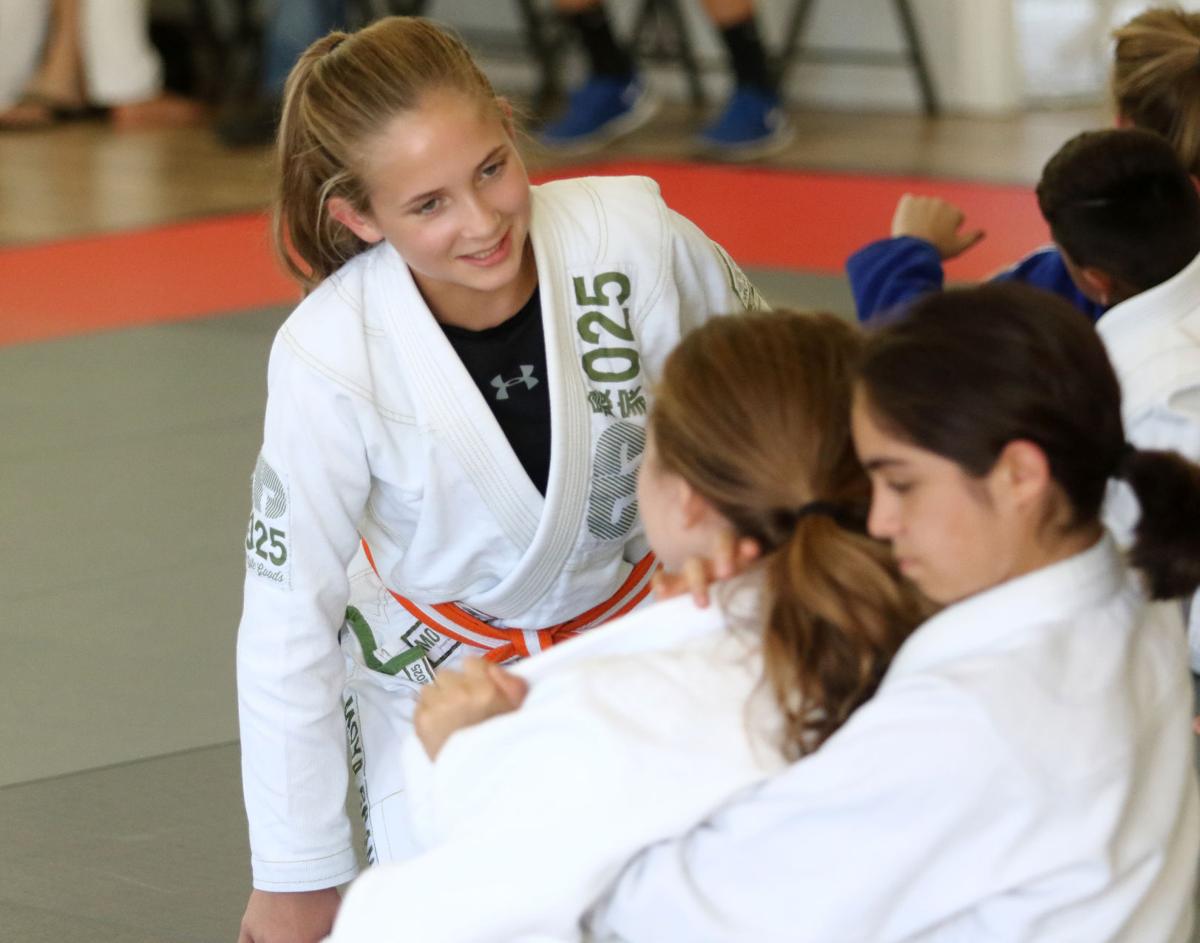 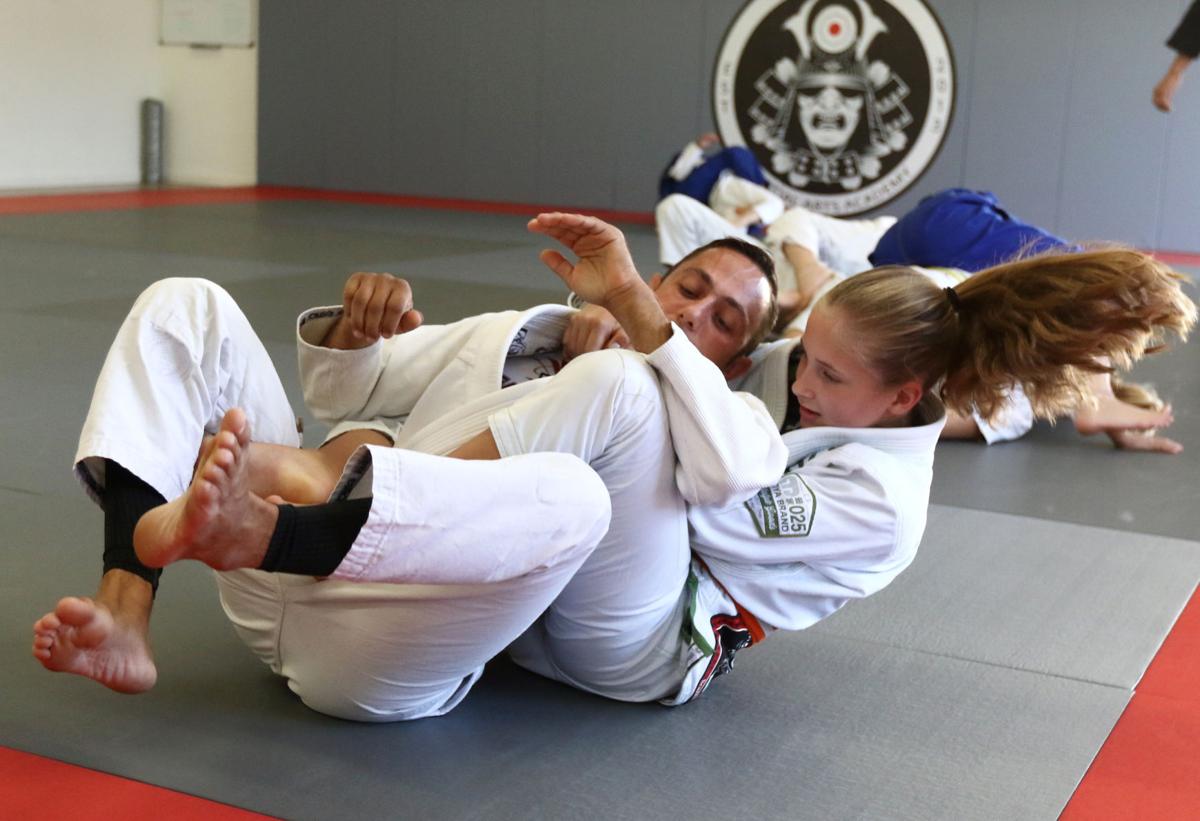 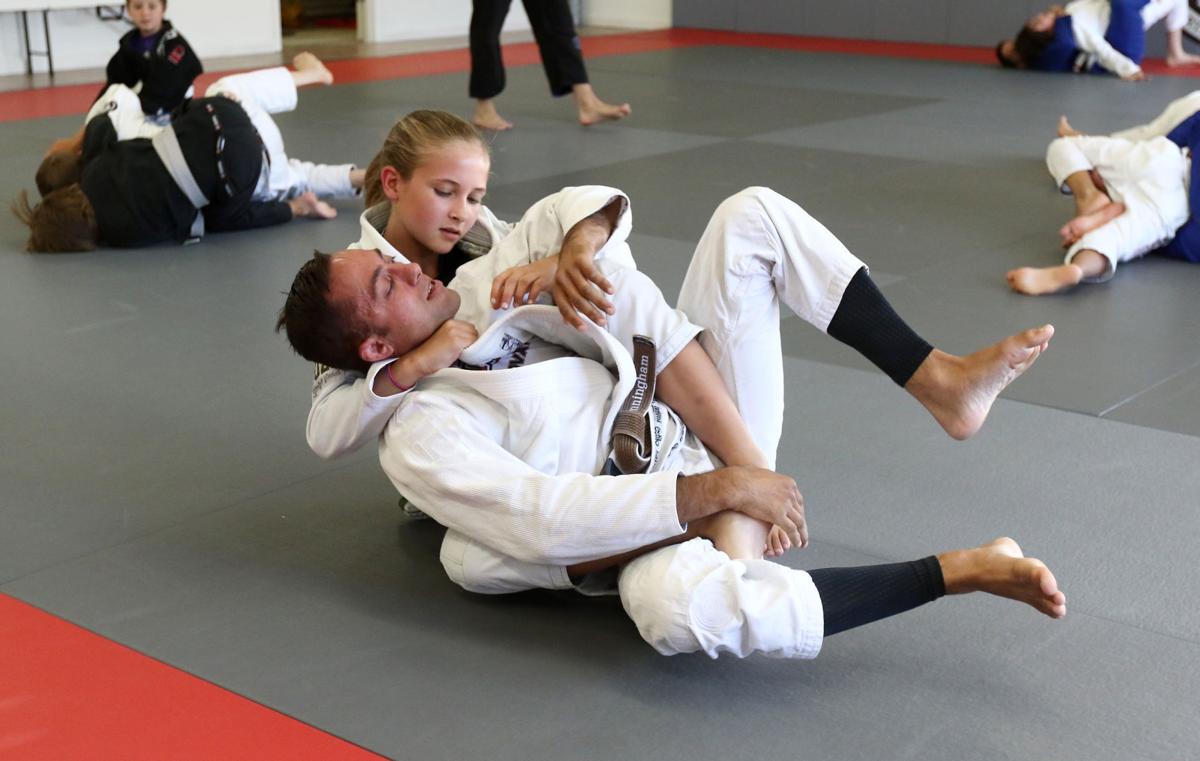 At first sight, Madeline Patrick may not look very intimidating with her bouncy blonde ponytail, small frame and glittery nail polish, but this 12-year-old is a force to be reckoned with when it comes to martial arts.

Patrick has been training at Performance Martial Arts Academy nearly every day for the past seven years and even assists co-owner Ryan Cunningham in training others her own age.

“It was a little awkward at first,” she said. “But I just pay attention to Ryan and demonstrate the move and then critique others.”

Madeline’s mom, Rain Patrick, was quick to jump in and said, “She’s really earned the respect from the other students and is really dedicated to this.”

Co-owner Julie Cunningham agreed that, even though Madeline is the first pre-teen to ever help train the younger students, it’s because of her dedication, intelligence and determination.

And those qualities show in her competitions as well.

Just last month Madeline Patrick defeated a 22-year-old woman with an armbar to win first place in a jiu-jitsu fight.

“It feels good to take down people that I didn’t know I could,” Madeline said. But she added that losses help her learn as well, because she will “try to think about what I did and what I need to work on.”

It’s this drive that allows Madeline not only to be a fierce competitor, but also a tremendous student.

She started the seventh grade at Joseph Lane Middle School this year and has made the honor roll every quarter so far.

“I wasn’t expecting as much homework on the first day,” Madeline said when asked how she likes school.

At Performance Martial Arts Academy they put an emphasis on not just teaching children about the basics of Brazilian jiu-jitsu and judo, but also about five fundamental life skills: discipline, respect, confidence, self-defense and fitness.

Many of the disciplines carry over to the classrooms where students are expected to be great role models. Through the martial arts academy they can earn rewards by getting a checked box if their teachers notice them doing well and once a students gets 30 checked boxes they earn a stripe and with 12 stripes they get a better chance to compete for their next belt.

Madeline has an orange belt right now and hopes that within a year to get her green belt as she’s progressively getting better in training.

It took Madeline seven years to get to the orange belt, starting with the white belt, followed by the gray and yellow belt.

“We saw a booth at the fair and she was playing soccer at the time, but wanted to try martial arts,” Rain Patrick said.

Madeline’s brother, Daniel, also competes in martial arts, while her sister, Taylor, decided to follow her dream of gymnastics.

Madeline competed in her first tournament at age 6.

“I just remember there was a cage fight at the same time and there were television cameras everywhere and I thought I was going to be on TV,” she said.

Madeline didn’t recall much else from the match, but her mother did.

“She was a little kid and just threw the other person down,” Rain Patrick said. “Everyone just cheered because this little kid did a judo throw in the middle of a jiu-jitsu fight.”

Ryan Cunningham has been training Madeline for all seven years and Madeline has a great respect for her coach.

Rain Patrick added, “(Ryan) is also training himself and trying to grow in the sport, which is different than someone who doesn’t practice the sport. This is his passion and that comes through in his teaching.”

Page designer Sanne Godfrey can be reached at 541-957-4214 or via email at sgodfrey@nrtoday.com.