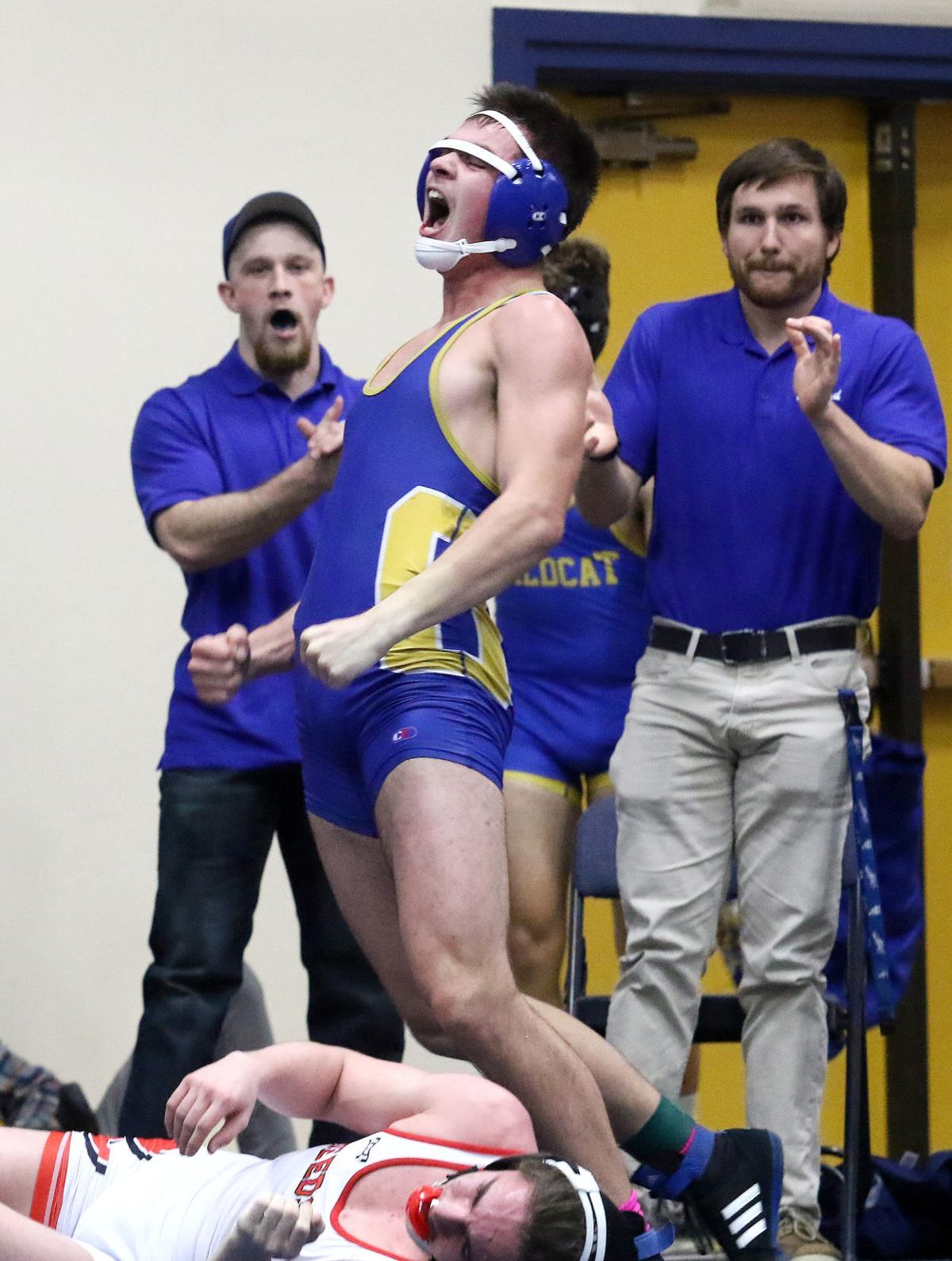 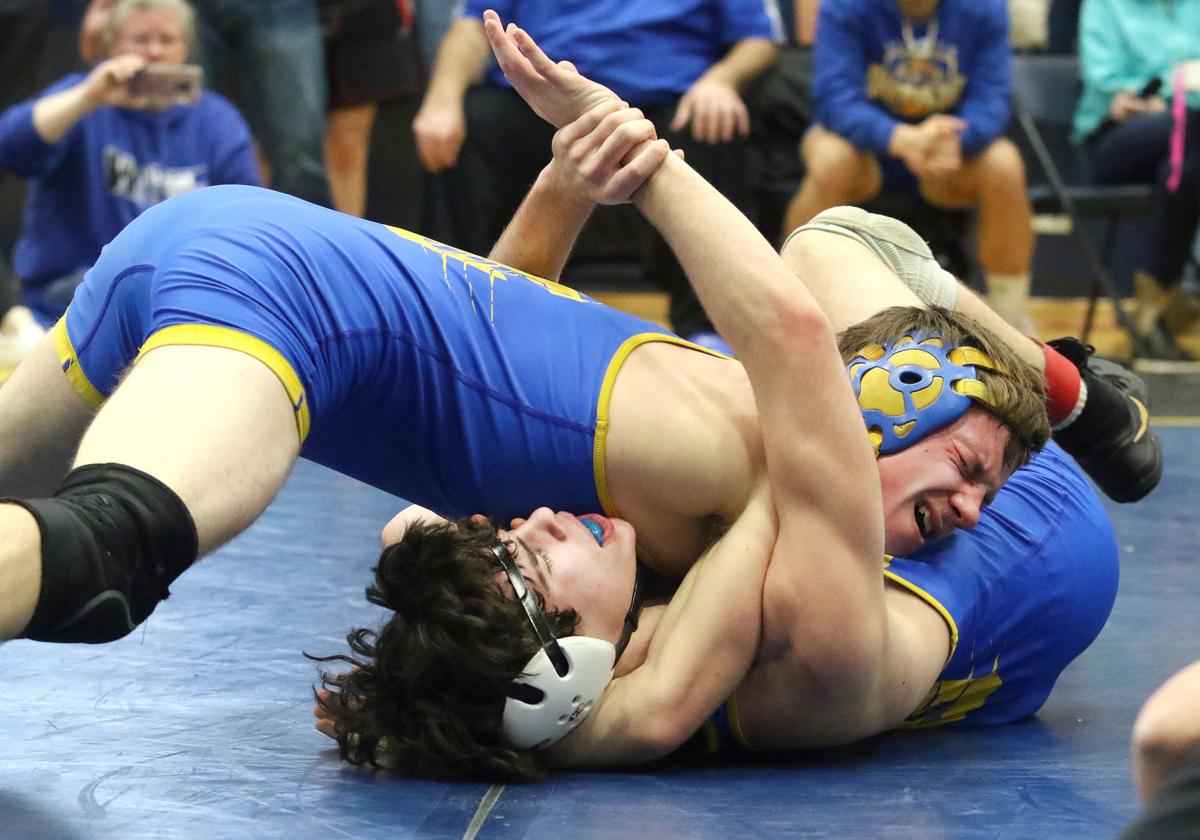 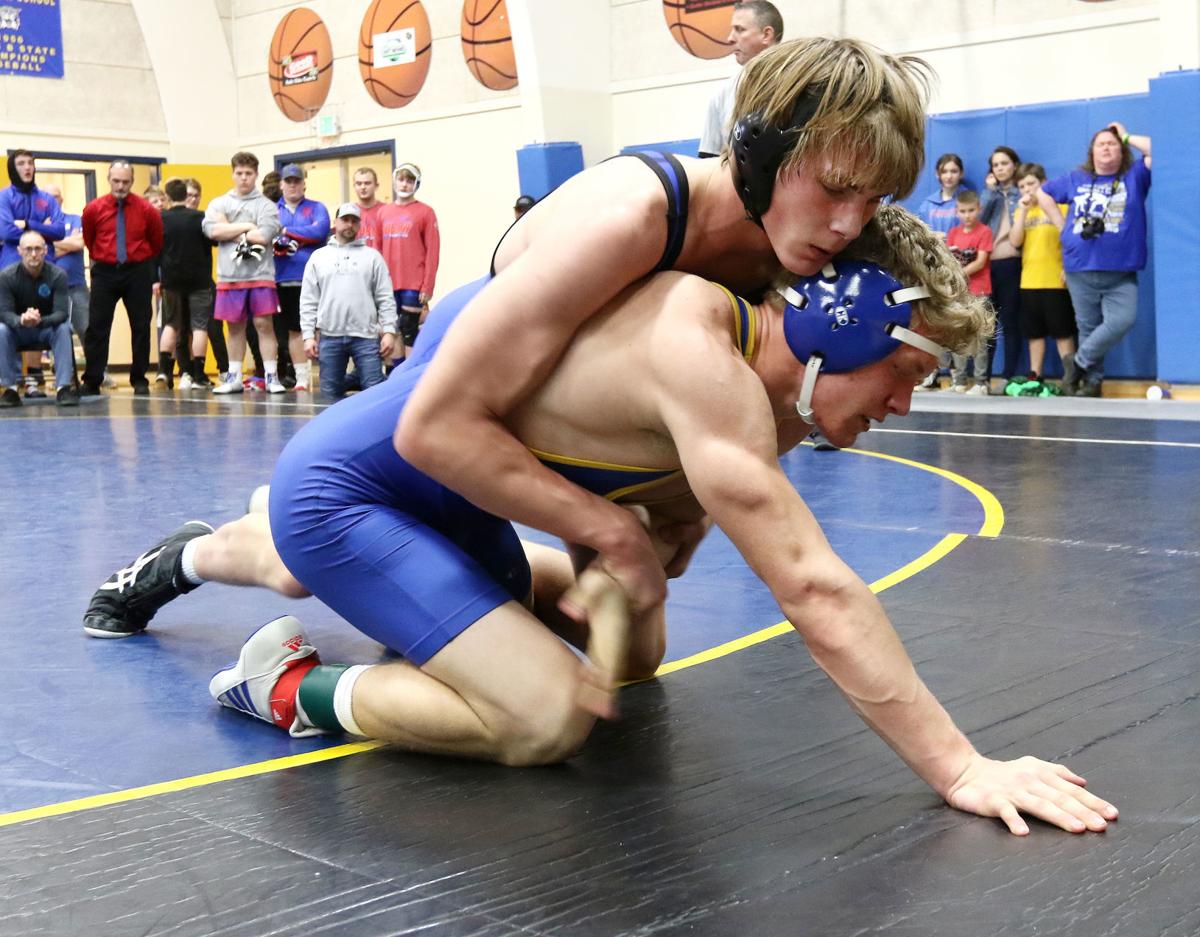 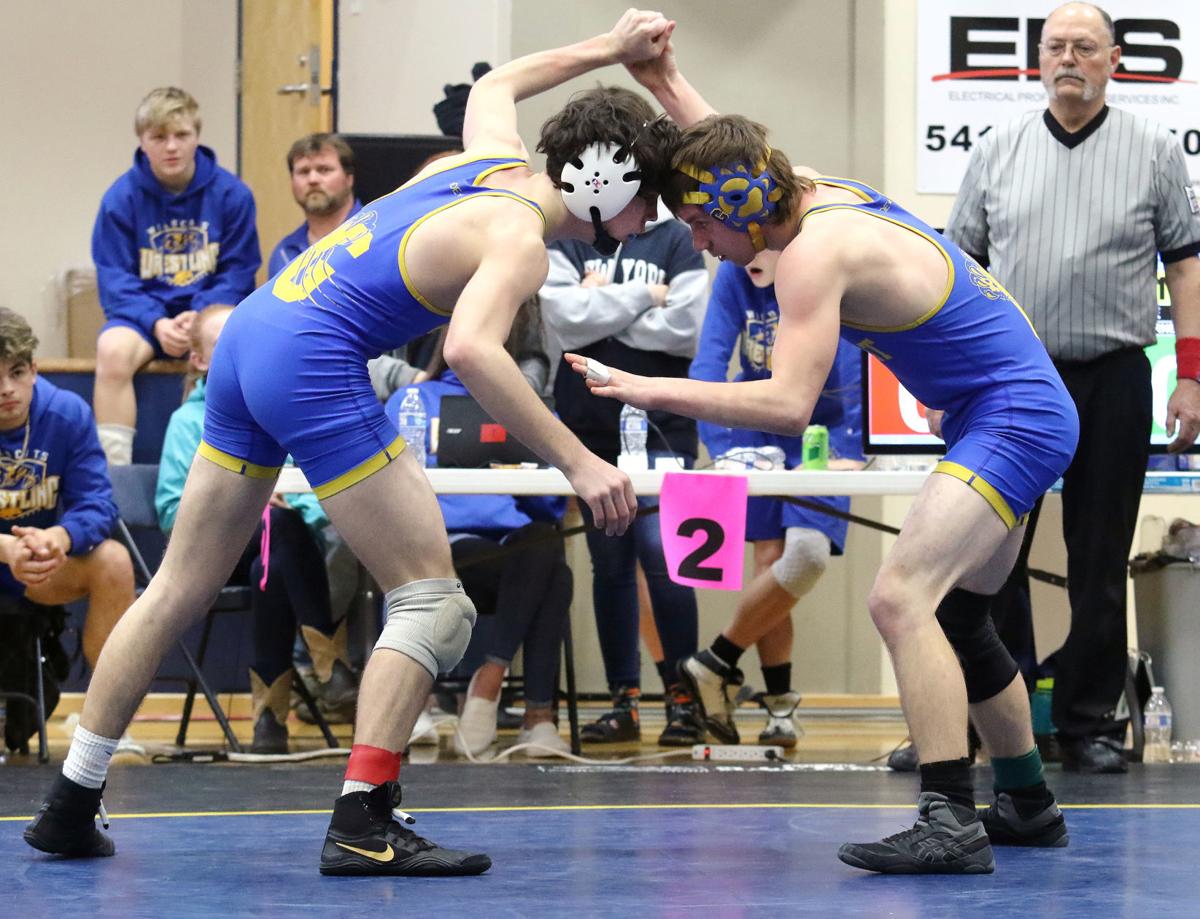 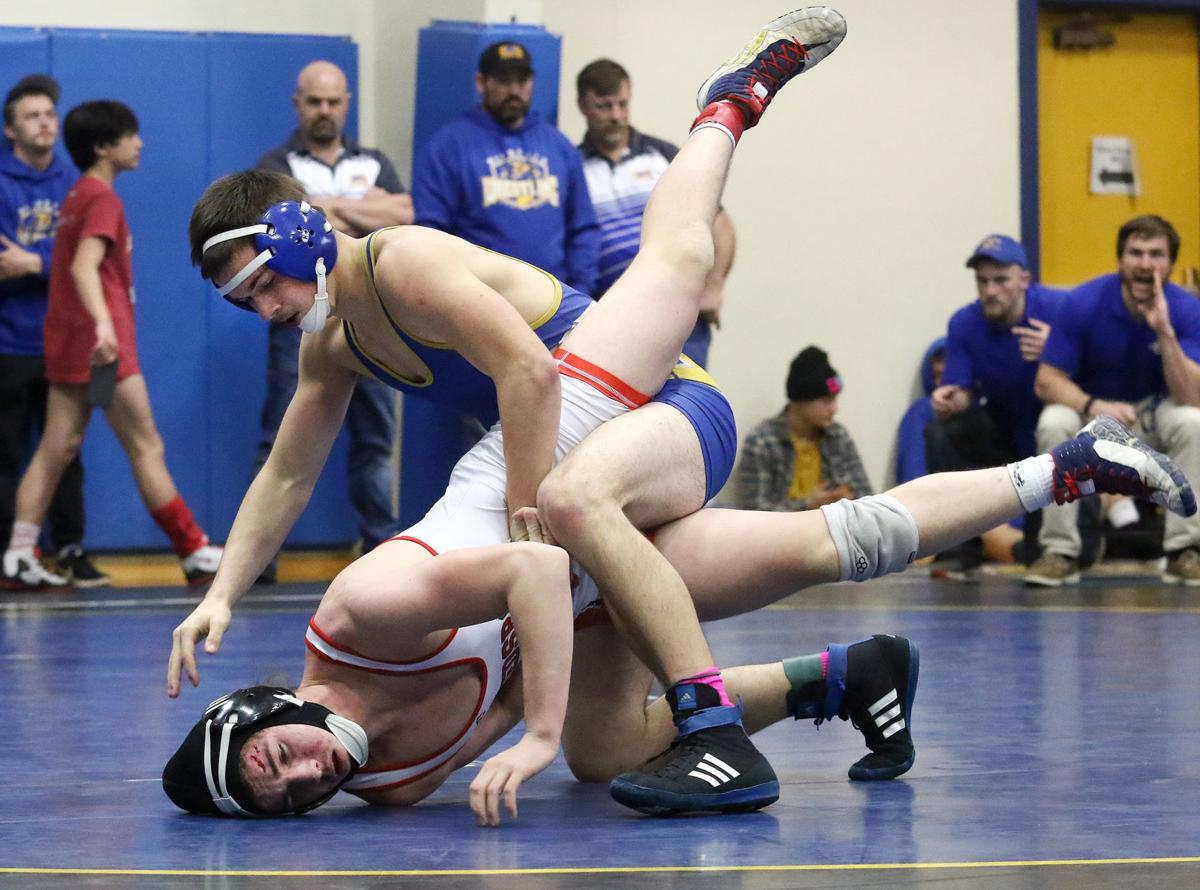 GLIDE — The last time the Oakland Oakers have had a wrestling season like this 2019-20 campaign was ...

Well, we’ll just say it’s been a while.

Oakland tallied 172 team points, finishing behind only No. 2-ranked Central Linn (264), who the Oakers dropped a 32-29 dual meet decision to earlier in the season.

“These guys really showed up this weekend. They wrestled great,” said Oakers coach Ian Patt, who was part of an Oakland team which placed sixth at the Class 2A/1A state championships in 2013. “I think the program is starting to turn the corner. We’ve had a great year, but we’re not done yet.”

Oakland sophomore Kaleb Oliver capped off a perfect regular season by winning the 132-pound title, then senior Austin Van Houten (170), junior Brayden Tackett (182) and senior Wil Powell (195) scored a trifecta of titles in the upper weights to earn all four of the Oakers qualifiers for the state championships, which will be held Feb. 28-29 at Portland’s Memorial Coliseum.

Oliver, who improved to 39-0 with 33 pins, had little trouble in his championship match, dropping Central Linn’s Tony Belcastro by fall in 1 minute, 48 seconds.

Van Houten and Reedsport’s Miguel Velazquez had arguably the best match of the championship finals, with Velazquez opening an 11-6 lead in the second round before Van Houten rallied to tie the match at 12-all in the third before pinning Velazquez with 47 seconds remaining.

“I knew I had to pin him to be seeded well (at state),” Van Houten said, “so I just threw it all in there.”

“It’s really great to see us come this far,” Tackett said. “We’re a basketball school, so it’s hard to get kids to come out and wrestle.”

“(Van Houten’s) pin was just awesome,” Patt said. “That was a real gut-check moment, and for him to get that pin with us having three in a row coming up, that really got the momentum going for us.”

Glide, which placed third as a team with 169 points, didn’t have much success in the championship finals, but still will advance six wrestlers to the state championships.

Top-seeded heavyweight Bryce McComb placed third but will get an automatic bid, and Corbyn Kangiser (160) reached the semifinals before getting head-butted by Monroe’s Tobin Payne. Kangiser won that match 12-5 but bowed out of the tournament, forfeiting the championship match to defending state champion Brody Ballard of Monroe.

Glide’s Austin Warner, after falling to Oliver in the 132-pound semifinals, met sophomore teammate Braxton Dill in the third-place final and earned a pin. Warner was then eligible for a wrestleback against runner-up Delcastro and scored a pin to secure his spot in the state tournament.

“You never want to see that, but you have to put your best kids in their best position to success,” Glide coach Aaron Towne said.

A wrestleback allows the third-place wrestler to challenge the runner-up in a weight class, provided the two have not wrestled previously in the tournament.

Wildcat freshman Byryn Miller got the wrestlebacks started off in thrilling fashion, taking down Central Linn’s Hagen Johnson near the edge of the mat, holding on and scoring a pin in 46 seconds.

“All I could hear was my teammates yelling, ‘Pull him in! You’re out of bounds!’” Miller said. “So I sucked him back in and he couldn’t move.”

It was a huge win for Miller, as Johnson was the 2A/1A 106-pound runner-up last February and ranked No. 4 in the state this season.

Gabe Syverson, who dropped the 138-pound final to the Cobras’ Hunter McIrvin, defended his runner-up finish in his wrestleback with a 13-1 major decision win over Lowell’s Tristan Garcin.

For Glide, a third-place finish at the district championships might have been a mirage no more than a month ago as Towne’s crew struggled through not only a rebuilding year, but a year filled with injuries and illness.

“Considering the struggles we had this year, the kids did a great job,” Towne said.

Reedsport, which was fourth in the team standings, qualified six wrestlers for the state tournament, getting individual titles from Aaron Solomon (106) and Elijah Carson (113).

Roseburg VA scheduling appointments for veterans to get COVID-19 vaccine
Lexi's amazing journey: Cat lost on Oregon camping trip makes it home to Arizona with the help of some human friends