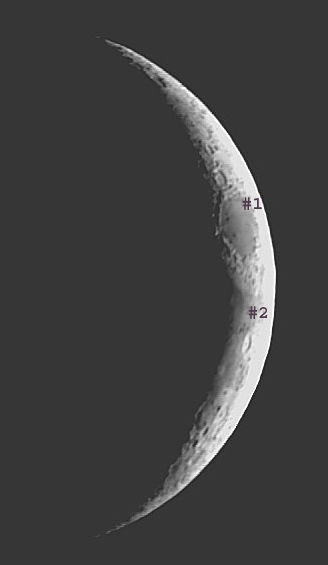 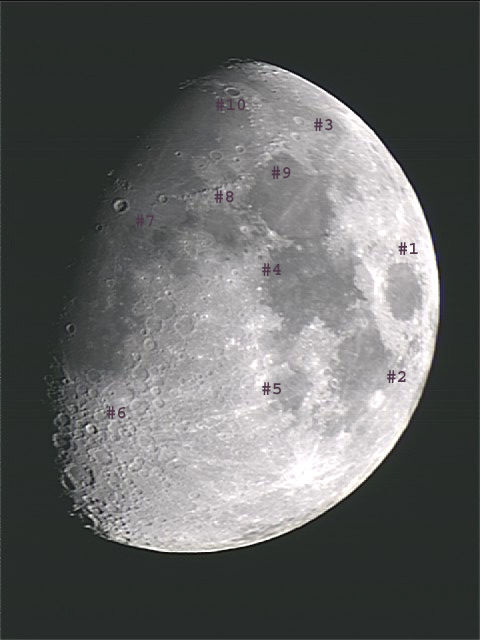 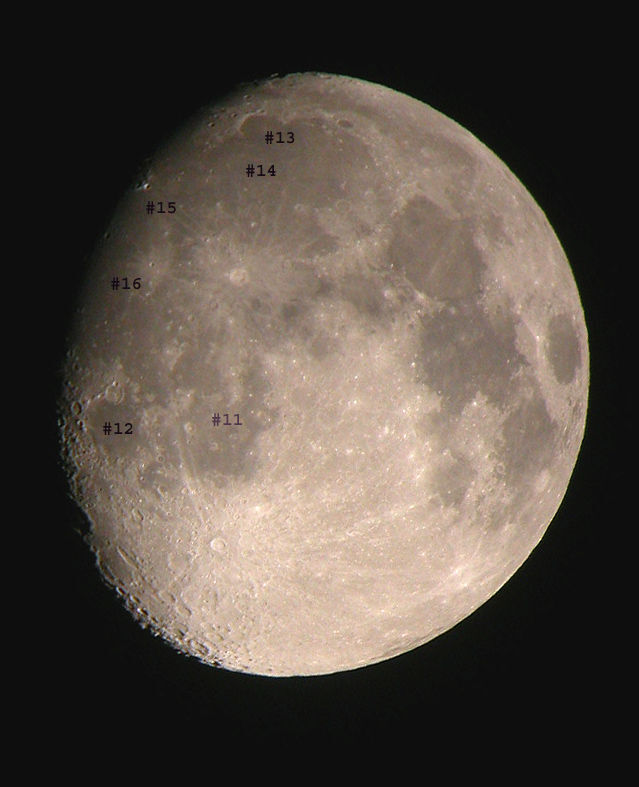 A nearly full moon on day 12

A nearly full moon on day 12

Start the New Year with an easy observing challenge. Take out your binoculars or small telescope and observe the moon over a two-week window during January or February 2021.

Exploring the moon is a good first target for new star gazers. You can involve the entire family searching for 16 lunar features from your back yard. The list includes a mountain range, several large craters and dark lava fields called seas or bays.

We start our exploration about three or four days after the New Moon phase (Jan. 13 or Feb. 11). A thin crescent moon hangs in the west-southwest after sunset. Depending on the weather, look on Jan. 16-17 or Feb. 14-15 to begin our lunar tour.

If skies clear on days five through seven, several other features can be observed. The moon is in the south as the sky darkens. First, let’s find two prominent craters as the crescent fattens a bit.

About 3/4 of the way up the lighted portion of the moon are the craters Atlas and Hercules (feature three of the waxing gibbous moon photo). Atlas is 54 miles across, while Hercules is about 43 miles in diameter.

After day five (Jan. 18 or Feb. 16), feature four — a large lava plain called Mare Tranquilits or the Sea of Tranquility — is in view. This region is historic because it is where man first touched down on the Moon on July 20, 1969. No, you cannot see the flag.

Now, sweep down to spot feature five which is another lava plain known as Mare Nectaris or the Sea of Nectar. Look about 1/3 of the way up the lighted portion of the moon from the bottom of the crescent. This dark feature is slightly more than 200 miles across.

Look to the southeast after sunset to find a bright moon. Sweep the bottom of the moon to find a bright round crater. Feature six is the prominent crater called Tycho, which is 54 miles in diameter.

Tycho is one of the most recent big lunar impacts. It took place about 100 million years ago, at about the time of the end if the Jurassic and the beginning of the Cretaceous eras on Earth. Dinosaurs ruled the earth as Tycho was blasted. Tycho is also known for its rays. These are prominent white lines sprouting from craters. These rays are moon dust which was ejected from impacts when either a meteorite or an asteroid struck the moon.

Tycho crater has some of the most beautiful and abundant rays of any lunar crater. The best days to see Tycho’s rays are days eight and nine in the lunar cycle.

Next, move your gaze just above the middle of the moon near the dark edge, called the terminator. Not a menacing robot. Look for feature seven, a prominent crater named after the famous astronomer Copernicus. This deep crater is about 56 miles across. Faint old rays may be seen on day nine.

Now, swing to the right to find a lunar mountain range, feature eight. The Montes Apenninus, or the lunar Apennines, looks like some tiny bumps in an upward curve. These bumps are actually mountains more than 575 miles in length and have peaks up to 16,000 feet. Galileo was amazed upon seeing lunar mountains.

Sweep to the upper left to find a dark oval at the edge of another dark lava plain. Feature 10 is the crater called Plato. This dark floored crater is now visible with a diameter of about 63 miles. It is also close to the top of the moon. (See the waxing gibbous moon photo for features 3-10).

The moon is nearly full and features 1-5 are mostly lost in the bright moon’s glare. You will notice a common theme among the dark lava fields we will explore.

Let’s start the final part of the Lunar Tour in the lower 1/3 above Tycho. Feature 11 is a large lava plain called Mare Nubium or the Sea of Clouds. This smooth dark plain is about 450 miles across.

Sweep to the right to find feature 12, Mare Humorum or the Sea of Moisture. This nearly circular dark spot is about half the size as Nubium at 220 miles across. Now, pan to the top of the moon to find features 13, 14 and 15.

Feature 13 is called Sinus Iridum or the Bay of Rainbows, a beautiful arc about 250 miles long adjacent to feature 14, Mare Imbrium or the Sea of Showers. This huge lava plain, more than 750 miles across, was created by a massive asteroid impact billions of years ago.

Swing toward the left to the terminator or dark edge to spot a white dot. Feature 15 is the crater Aristarchus named for a great Greek Astronomer. This moderately young, 450-million-year-old crater is about 25 miles across and about 9,000 feet deep.

Continue down from Aristarchus to a smooth dark area to the left of Copernicus. This is the last feature, number 16. It is called Oceanus Procellarum or the Ocean of Storms.

Paul Morgan is an astronomer at Umpqua Community College in Winchester. Linda Freeman is a member of Umpqua Astronomers.

Earth moves farther away from Mars this month

Invasion of the green crabs in Coos Bay estuary

The Winter Solstice Great Conjunction of Jupiter and Saturn — update

Umpqua backyard astronomy: A reality check of your first telescope