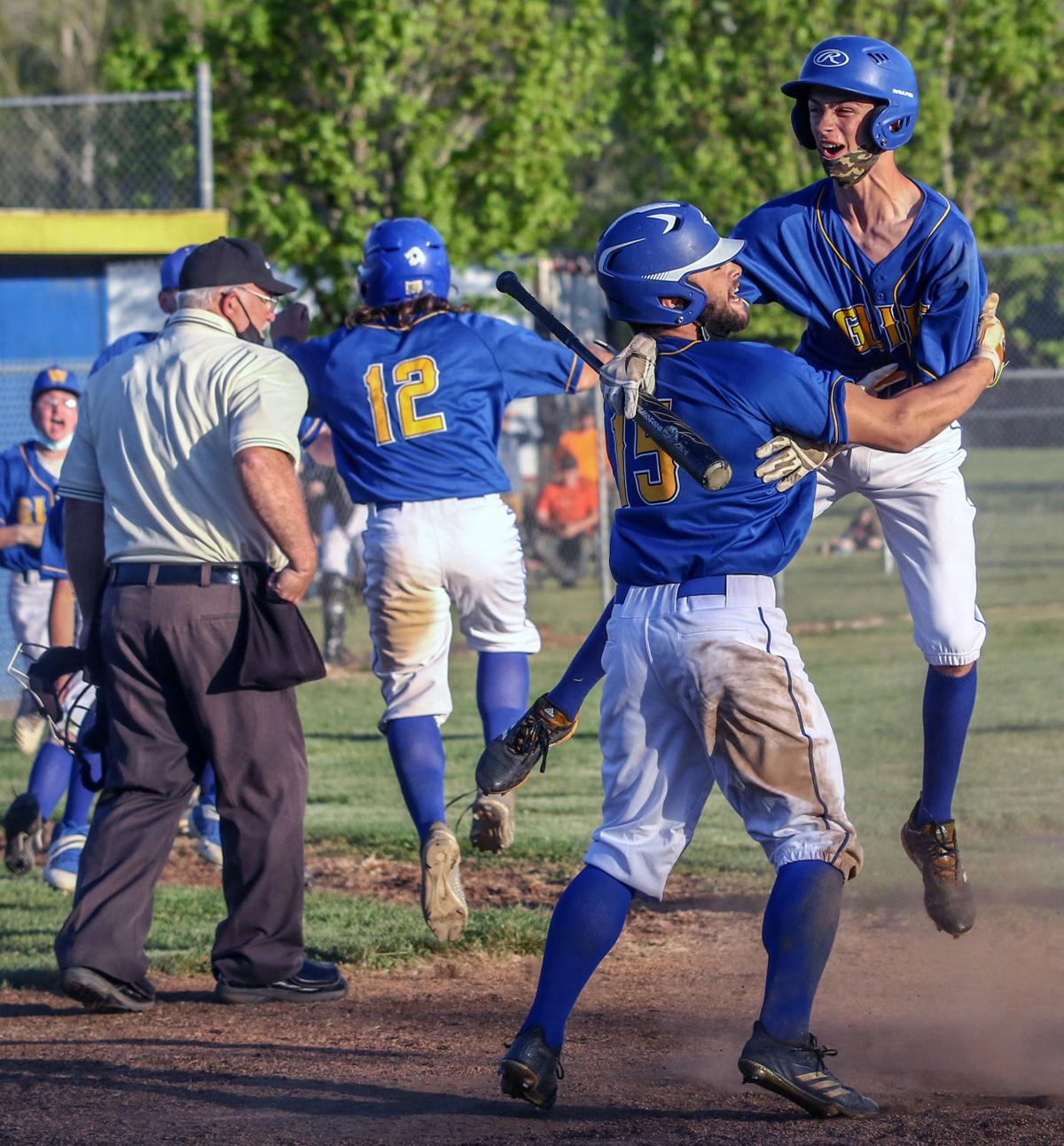 Glide senior Mason Delcollo (15) celebrates with teammate Dylan Ackerman (5) after Delcollo scored the winning run to give the Wildcats a 4-3 come-from-behind win on Tuesday at Sewell Field in Glide. 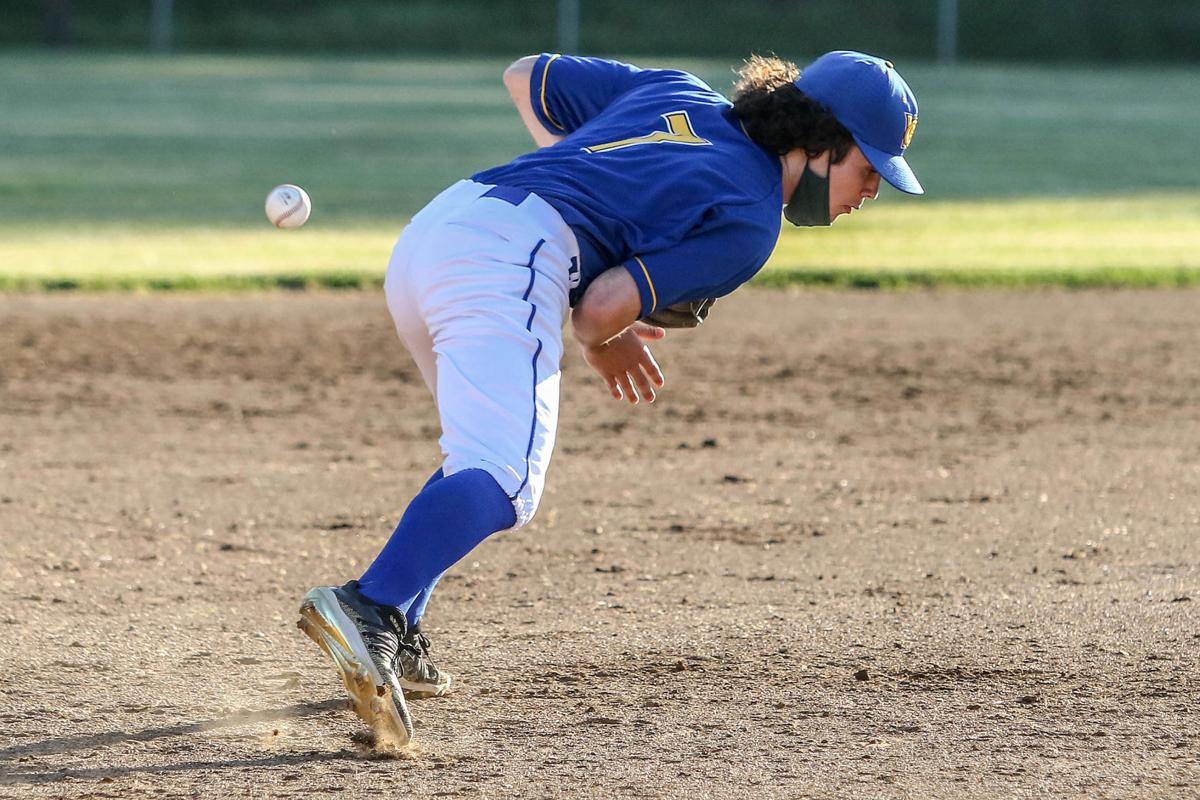 Glide third baseman Braxton Dill (7) attempts to stop a base hit by Oakland’s Dulton Rogers in the seventh inning of the 2A/1A Special District 4 baseball game at Sewell Field in Glide. 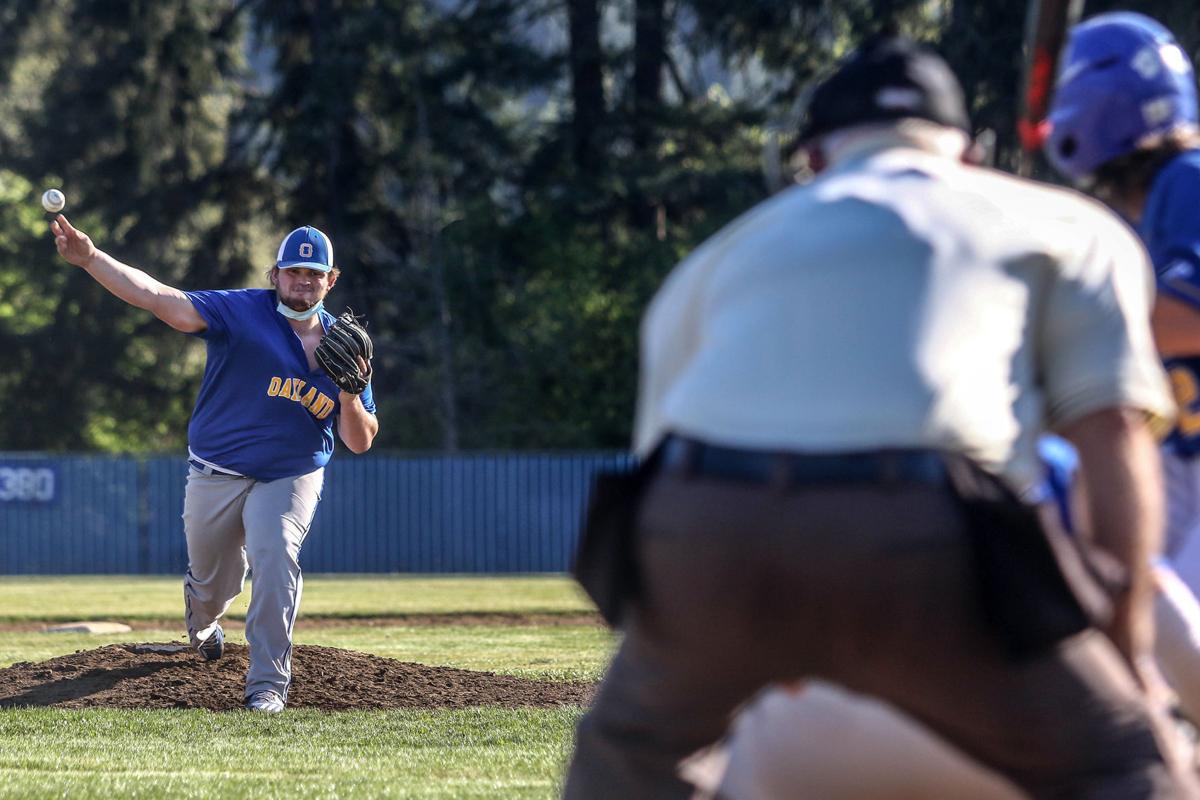 Oakland freshman Ty Percell (33) struck out six and allowed only two hits in just over five innings work against Glide on Tuesday. 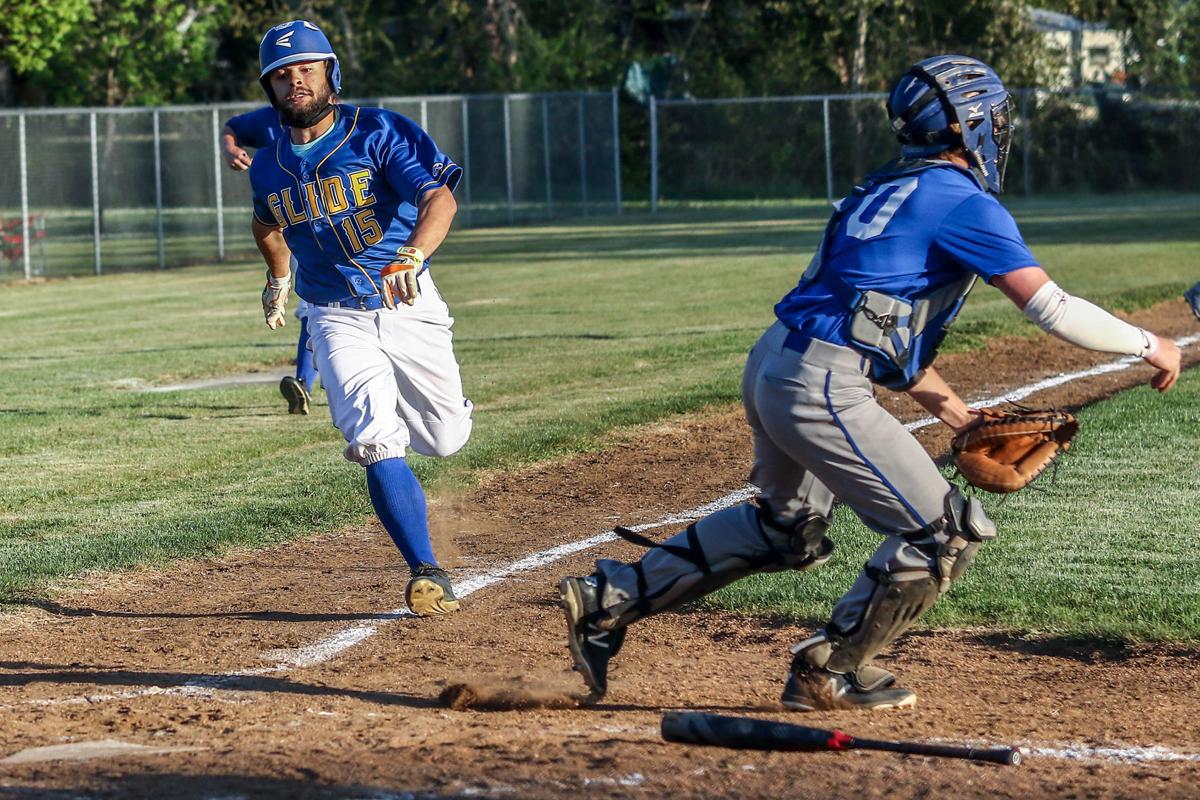 Glide baserunner Mason Delcollo (15) prepares to slide home with the winning run in the bottom of the eighth inning against Oakland on Tuesday. 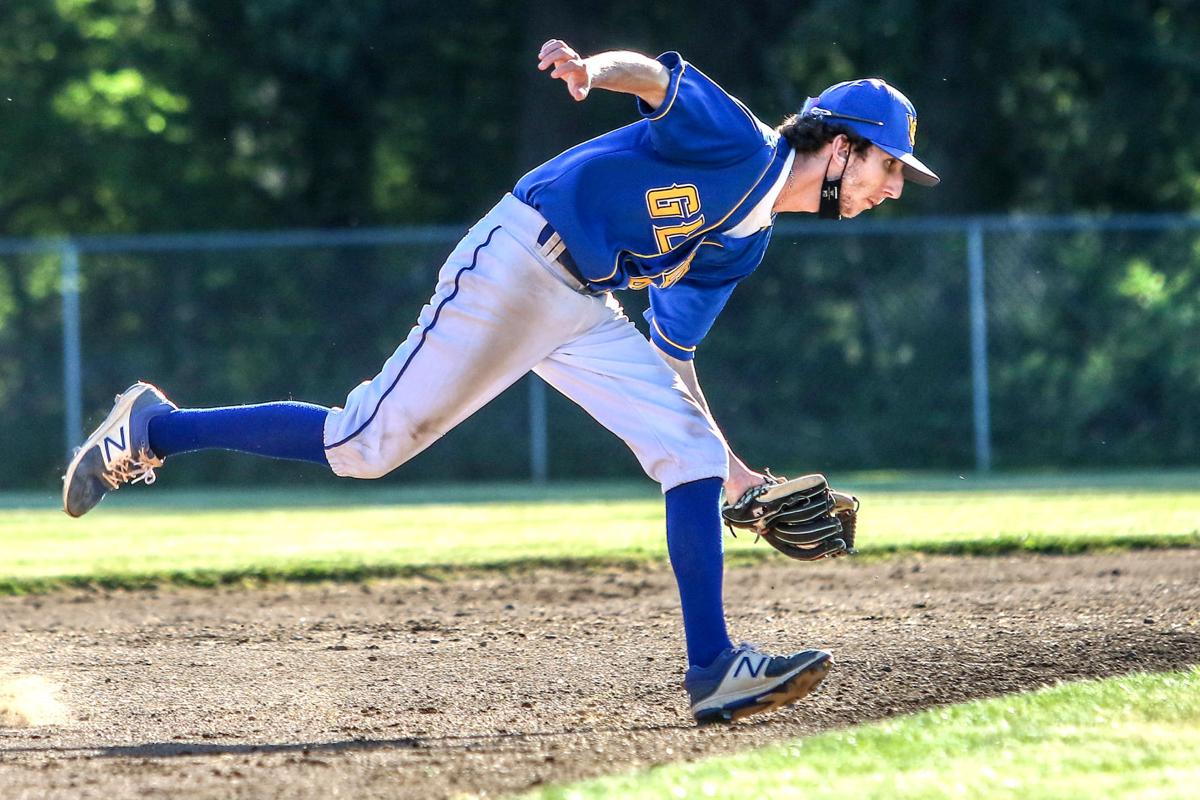 Glide shortstop Trever Short (8) scoops up a grounder in a Special District 4 baseball game against Oakland on Tuesday at Sewell Field.

Glide senior Mason Delcollo (15) celebrates with teammate Dylan Ackerman (5) after Delcollo scored the winning run to give the Wildcats a 4-3 come-from-behind win on Tuesday at Sewell Field in Glide.

Glide third baseman Braxton Dill (7) attempts to stop a base hit by Oakland’s Dulton Rogers in the seventh inning of the 2A/1A Special District 4 baseball game at Sewell Field in Glide.

Oakland freshman Ty Percell (33) struck out six and allowed only two hits in just over five innings work against Glide on Tuesday.

Glide baserunner Mason Delcollo (15) prepares to slide home with the winning run in the bottom of the eighth inning against Oakland on Tuesday.

Glide shortstop Trever Short (8) scoops up a grounder in a Special District 4 baseball game against Oakland on Tuesday at Sewell Field.

GLIDE — The Oakland Oakers were one out away from scoring a big road victory over the Glide Wildcats, but it all came unraveled in one wild sequence.

Glide took advantage of a big hit and three consecutive Oakland errors to come from behind and claim a 4-3 Class 2A/1A Special District 4 baseball victory over the Oakers Tuesday at Sewell Field.

With Glide down to its last out in the bottom of the eighth inning, trailing 3-2, Wildcat senior Mason Delcollo launched a high fly ball to deep left-center field, which was misjudged by both Oakland outfielders. Glide’s Malachi Dunnavant rounded second and broke for third as the relay throw from Oakland shortstop Cole Collins got away from second baseman Jeffery Kramer and rolled toward the pitcher’s mound.

Dunnavant scored to tie the game at 3-3, and Oakland pitcher Corbin Picknell, who was backing up home plate, rushed to recover the overthrow as Delcollo broke for second base. Picknell’s attempt to throw Delcollo out at second sailed back into centerfield, and Delcollo raced home with the winning run before being mobbed by teammates.

“It was a poorly played game, but somehow we pulled through,” Glide junior Colby Bucich said.

The game was tied at 2-2 after seven innings, and the Oakers scored the go-ahead run in the top of the eighth when junior designated hitter Isaiah Vanassche looped a ball into shallow right field to score freshman Ty Percell from third base.

With runners on second and third with one out, Glide reliever Dylan Ackerman managed a strikeout and fielded a short grounder to get the Wildcats out of the jam.

“That was a big moment in the game,” Glide coach Justin Bennett said. “I couldn’t be prouder of Dylan Ackerman today. He had no idea he was going to throw in this game today, and he finds out with two outs in the (bottom of the) seventh inning.

“We couldn’t have asked anything more from him.”

More on Ackerman in a moment.

In the bottom of the eighth, Braxton Dill got Glide on the bases with a leadoff single, but a sacrifice bunt attempt by Bucich was popped into the air to Picknell, who fired to first to complete a double play. Dunnavant reached on an error by Oakland first baseman Percell, setting up Decollo’s chaotic finishing blow.

Ackerman was pressed into pitching service in the top of the eighth after Glide relief pitcher Tryson Melton suffered a scary injury on a play at second base.

Melton lined a single into centerfield, but the incoming throw to second base was wild and Melton broke for second. Much like the play that ended the game, Picknell fielded the loose ball and fired to Kramer, whose swiping tag was in time to catch Melton.

As Melton attempted to jog back to the dugout, he took two steps before falling to the ground. Melton got back up, fell again and was motionless for nearly two minutes. Team personnel were able to help Melton to the dugout with apparent concussion-like symptoms, according to a school administrator.

Oakland coach Ben Lane said after the game that Kramer’s tag had caught Melton in the helmet.

Despite the manic ending to the game, both teams started off strong, especially on the mound. Starting pitchers Percell and Glide’s Trever Short traded strikeouts before Oakland put the first runs on the board in the top of the third.

Picknell launched a hard-hit ball to center field which was misplayed by Bucich and scored Marcus Carlson for the first run of the game. Percell followed with a run-scoring single to left to plate Dulton Rogers for a 2-0 Oakers lead.

Glide would eventually answer in the bottom of the fifth, with Melton hitting a sacrifice fly to score Dylan Damewood and Short driving home Bryce Swain to tie the game.

Oakland had a chance to blow the game open in the top of the seventh, loading the bases with two outs. Picknell blasted a ball to deep center field, but Bucich was able to run it down, making a stumbling catch to end the threat.

“I was a little nervous because I had dropped one earlier, but I was able to pull through and just got back there,” Bucich said.

The Oakers had yet another shot to pull away in the top of the eighth. Percell was hit by a pitch to lead off the frame, and Baker Brooksby drove a ball deep to left field which looked like it was leaving the yard but ultimately resulted in a ground rule double, moving Percell to third.

“Corbin hit two bombs, and then Baker’s shot ... those are home runs at our place,” said Lane, referring to the larger dimensions of Sewell Field.

Short struck out 10 Oakers over 4 1/3 innings with three walks and two hits. Melton pitched three innings with four strikeouts, two walks and allowed only one hit before exiting the game. Ackerman was credited with the pitching win.

Percell struck out six over 5 1/3 innings with two walks and two hits, while Picknell took the loss.

The teams combined for nine errors.

“We didn’t play our best baseball today,” Bennett said. “We didn’t do the little things very well. But we’re going to come out and practice hard tomorrow, practice hard Thursday. We have some things we need to clean up. It should have cost us, but we got lucky.”