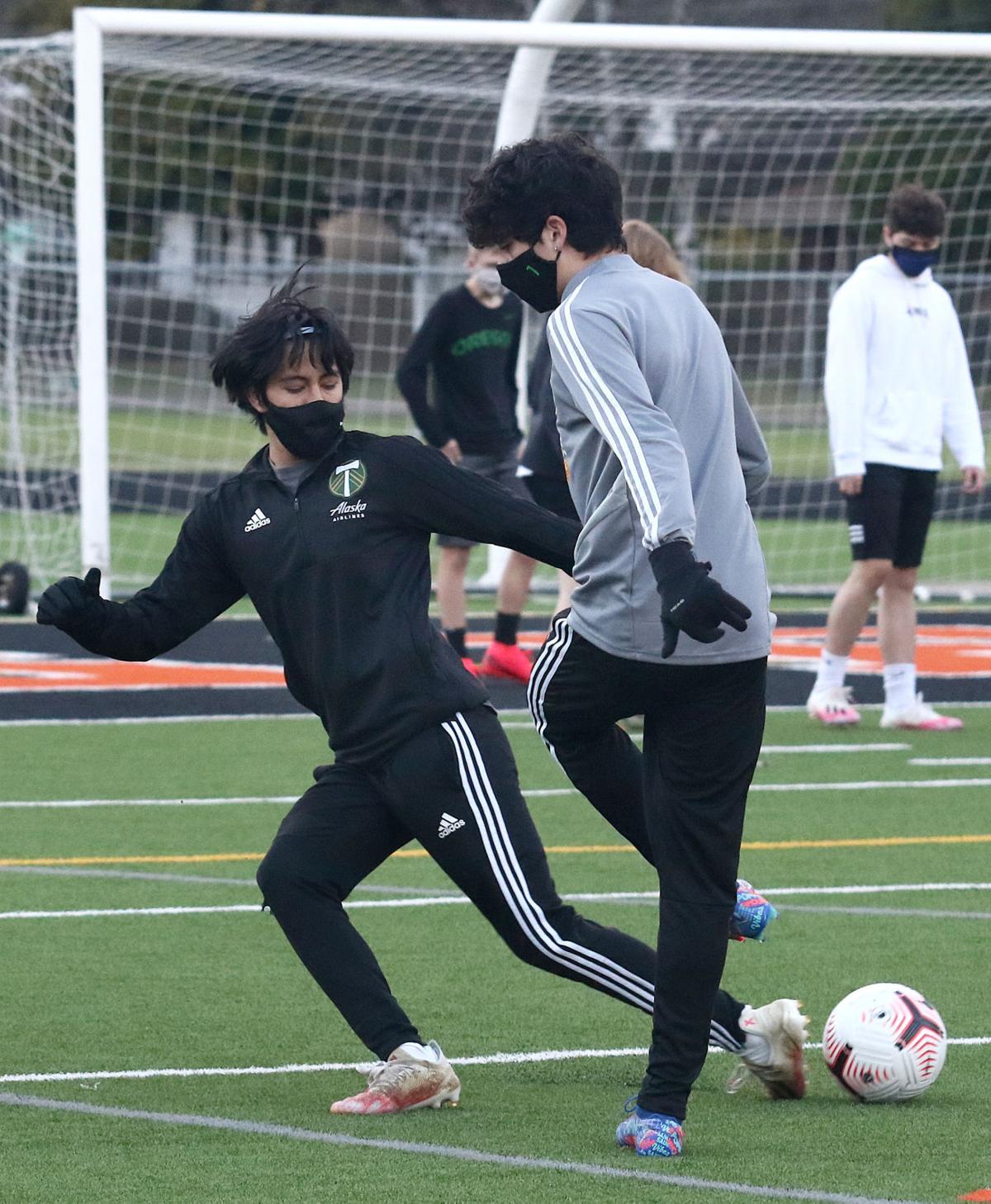 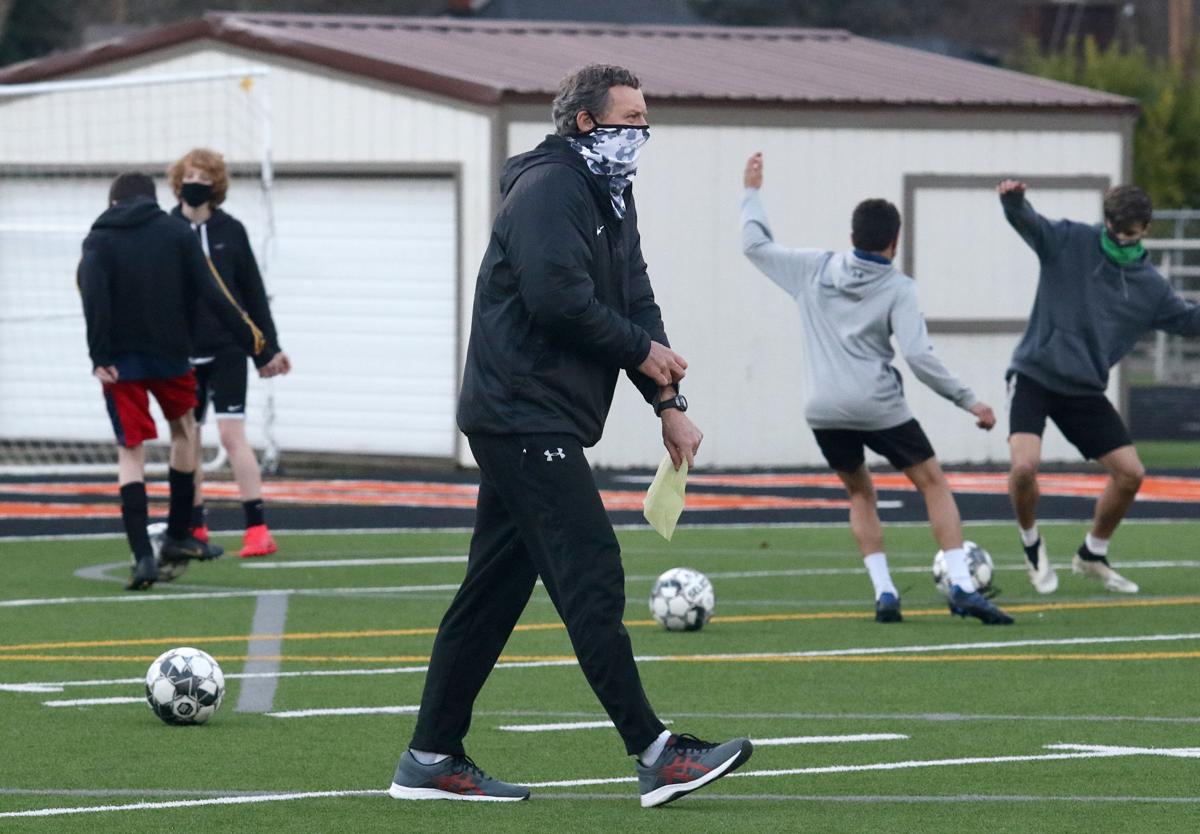 Roseburg High School head boys soccer coach Jim Giraudo looks on as his team runs through a drill at Finlay Field on Tuesday night. Giraudo is in his fifth season in charge of the program. 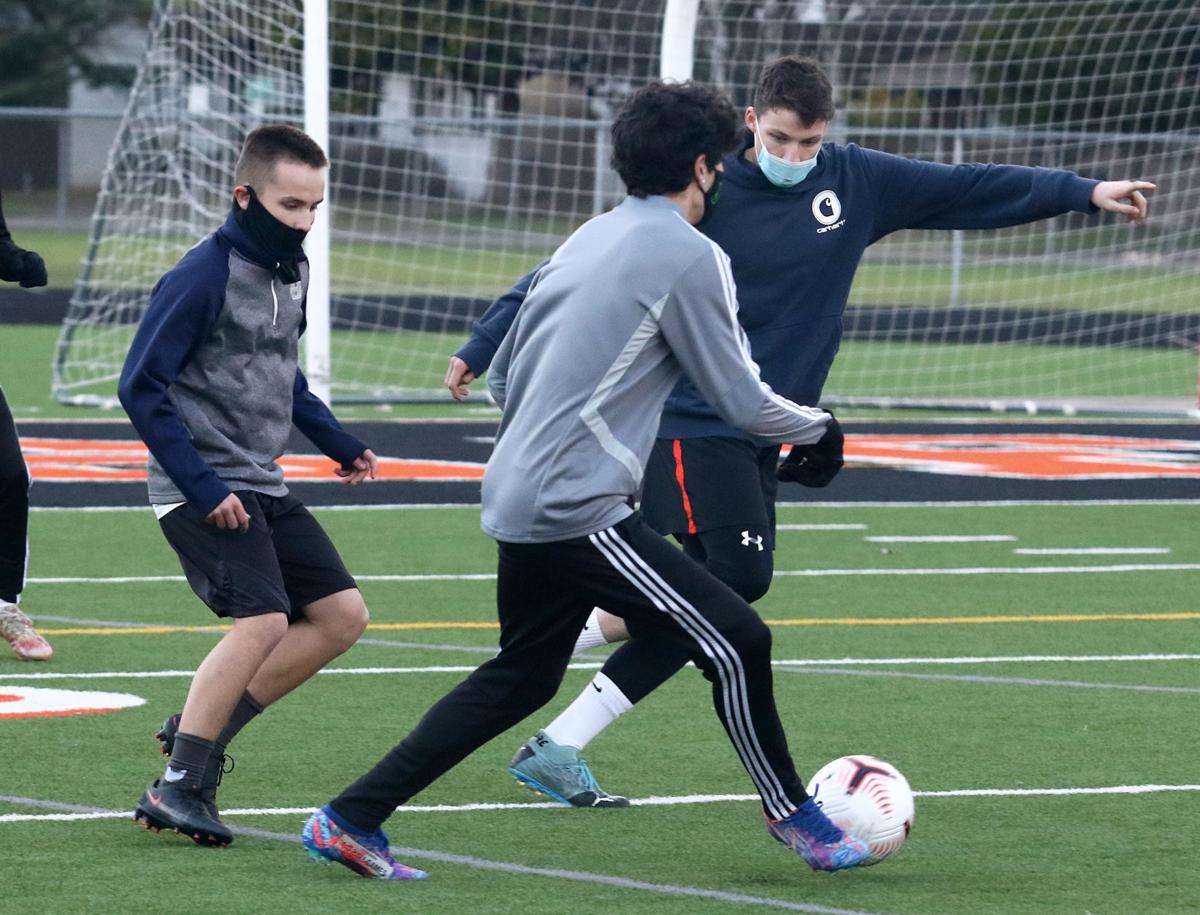 Roseburg High School boys soccer players warm up before a practice session at RHS on Tuesday. 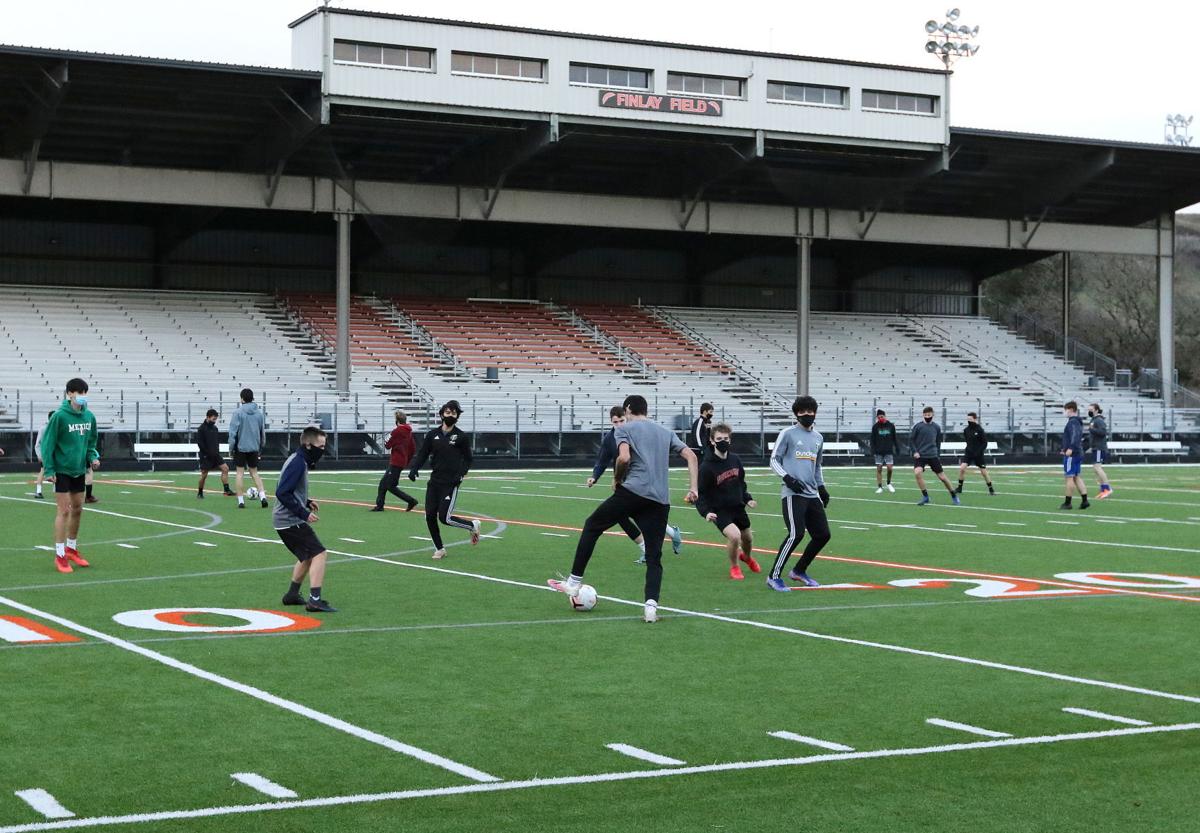 Members of the Roseburg High School boys soccer team work on a drill before a practice session at RHS on Tuesday.

Roseburg High School head boys soccer coach Jim Giraudo looks on as his team runs through a drill at Finlay Field on Tuesday night. Giraudo is in his fifth season in charge of the program.

Roseburg High School boys soccer players warm up before a practice session at RHS on Tuesday.

Members of the Roseburg High School boys soccer team work on a drill before a practice session at RHS on Tuesday.

Rain greeted members of the Roseburg High School boys soccer team early on during their workout on the turf Tuesday evening at Finlay Field.

But a little cold, wet weather wasn’t going to stop the Tribe in a maddening school year that so far has been dominated by the coronavirus pandemic.

Roseburg lost its normal 2020 fall season because of the virus, and is preparing to play a tentative shorter season this winter/spring — with approval needed from Gov. Kate Brown and the Oregon Health Authority. Right now, it’s a go.

Official practice, as announced by the Oregon School Activities Association, starts on Feb. 22 and the Indians are scheduled to open their slate on March 2.

“Right now, I’m feeling pretty optimistic (we’ll have a season),” Roseburg coach Jim Giraudo said. “Winning is fun, but this year there are no rankings so we’re just looking to get the kids on the field and having them improve their game. They’re so ready to get out and get moving.”

The Indians are looking for more success after struggling in 2019, finishing 1-11-2 overall and 1-8-1 in Southwest Conference play. Roseburg only managed 12 goals in 14 games.

“The expectation this (past) fall was we’d be better than last year,” Giraudo said. “We have lost a couple of seniors to early graduation, but our numbers are looking pretty good. It looks like we have a little better balance. We have several club players who play in Eugene ... they’re just a year older, stronger and better and we’re looking to them for goals.”

Seniors Rayce Bergeron, Attreyu Pinard and James Dauterman are the captains of the team this year. Bergeron and Pinard are defenders, while Dauterman is a midfielder.

“It was pretty heart-breaking (not having a fall season), to be honest,” Pinard said. “I was definitely looking forward to my senior season, that final type of send-off. Doing what I can for the program.

“It’s the same type of mindset. We have to go and push ourselves every day, try and get better. Hope for the best and win as many games as we can. I think we’re getting prepared for what we have coming up.”

“It was sad. I felt like I got cheated,” Dauterman said of no fall season. “Now with us having a second chance during the spring, it’s going to be good. We’ll do the best we can and I’m excited.

“We have to be ready for the season to be canceled, and have to be ready to adapt to whatever regulations are imposed by the OSAA. I think it’s going to be a decent season ... we don’t have as many older and talented players as we’ve had in the past, but have the potential to grow.”

Bergeron likes the makeup of the team.

“My mindset is still to go hard,” he said. “Stay strong and keep the team together, that’s what I’ve been trying to do. Make sure everyone is on the same page and keep pushing people, even if for a little bit.”

“Some parts of (this season) are the same,” Giraudo said. “The training’s the same, how you play the game is the same. The weather is different and that plays a part in it.”

“We have some strong technical ability and have some skilled players coming in as freshmen,” Pinard said. “There’s definitely some hope for the future.”