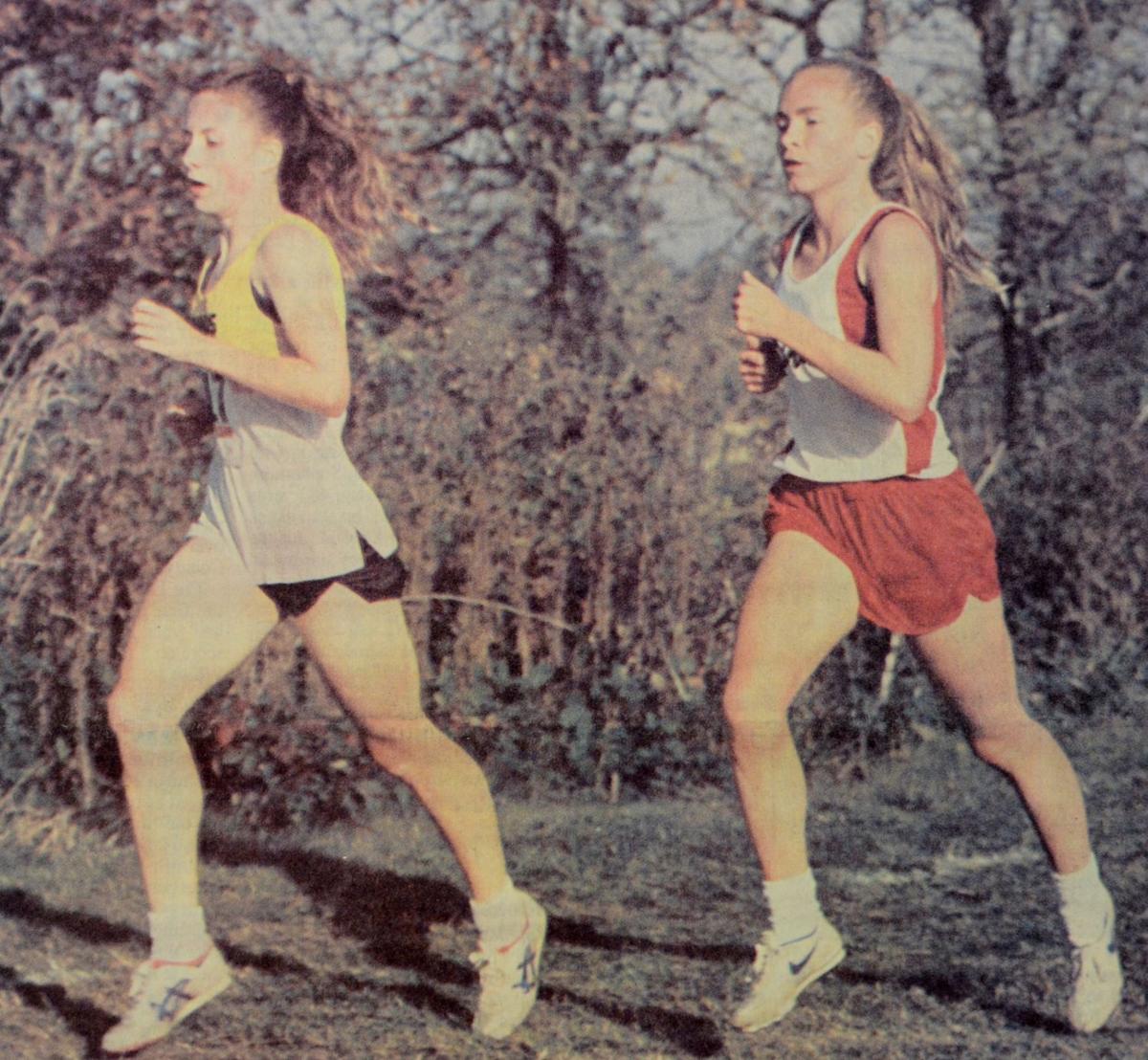 Iris Cripps of Glendale, right, runs with Camas Valley’s Alyson Barrett during the Class 2A/1A state cross country championships at Lane Community College in 1993. Cripps won the last of her three straight state titles that season, while Barrett ran to a state crown in 1996. 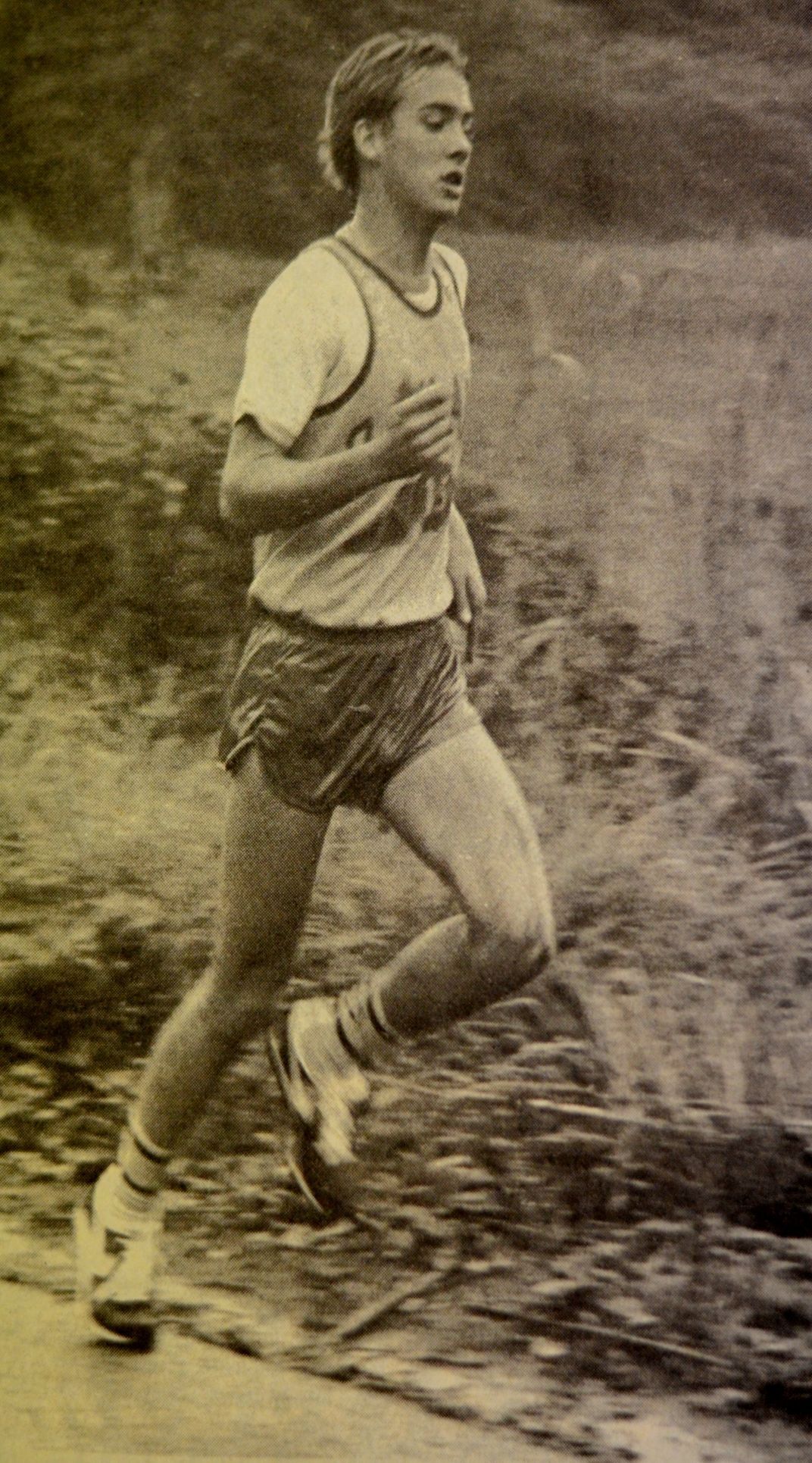 of Oakland won the 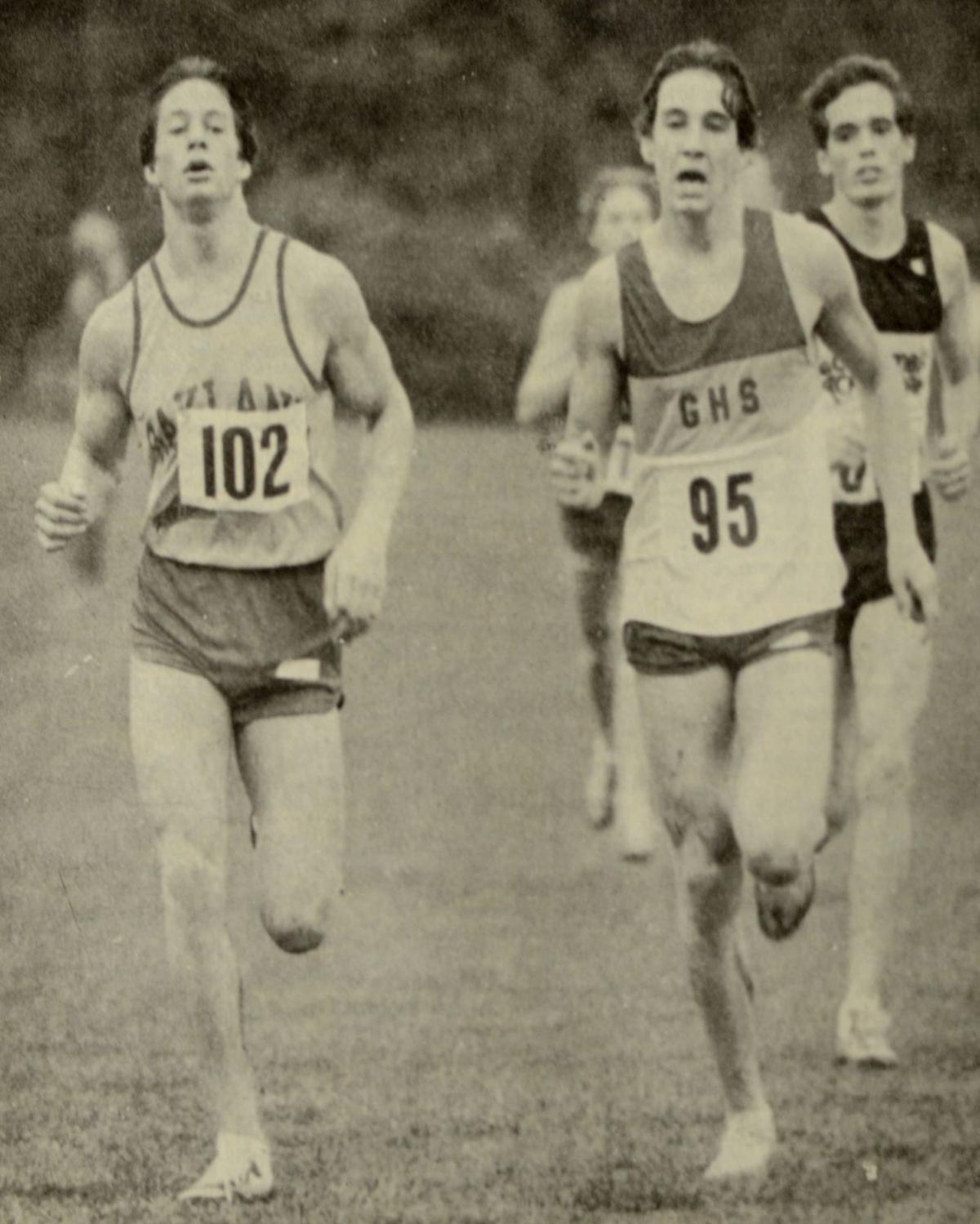 Oakland’s Jack Catton, left, sprints to the finish line against Matt Underwood of Gilchrist on his way to winning the Class A/B state title in 1983. The Oakland boys also won the team crown. 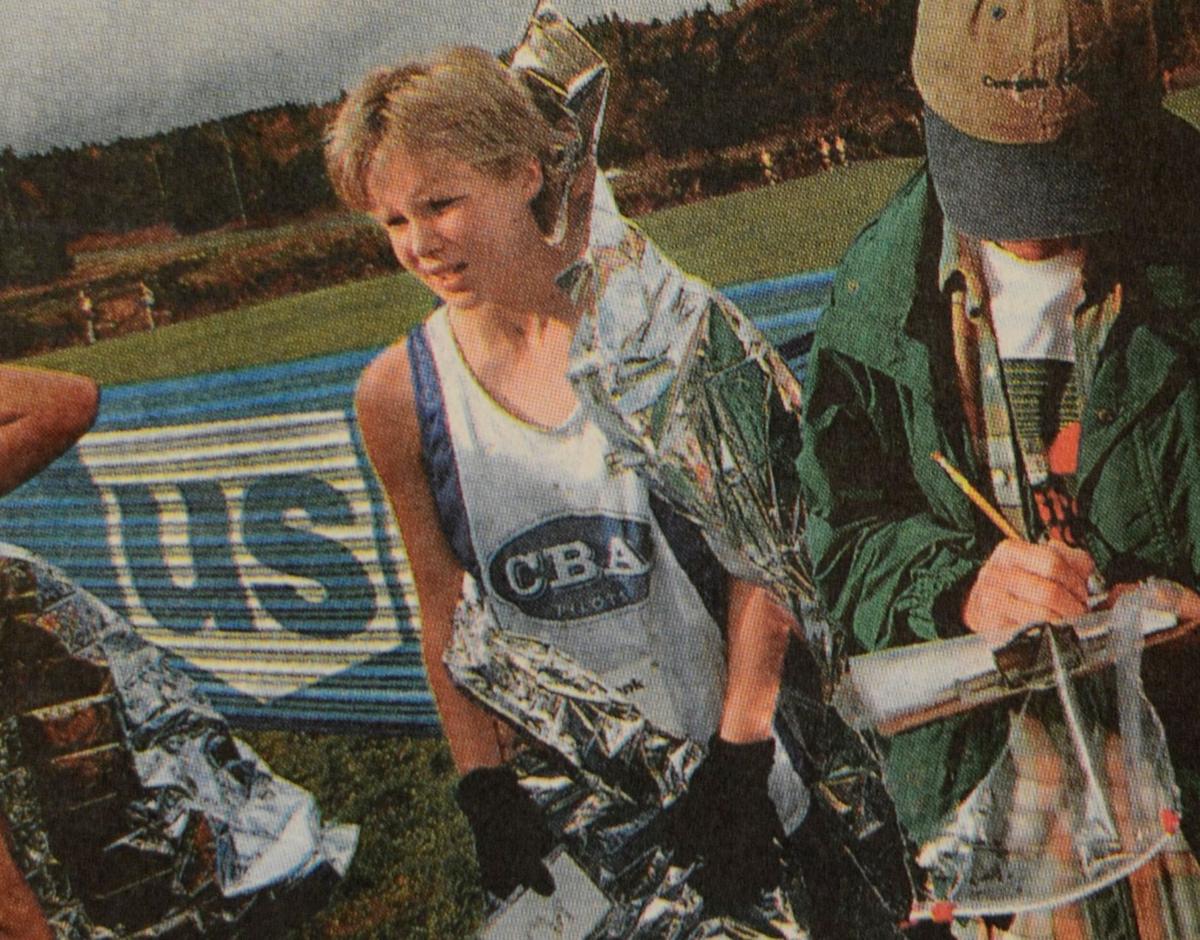 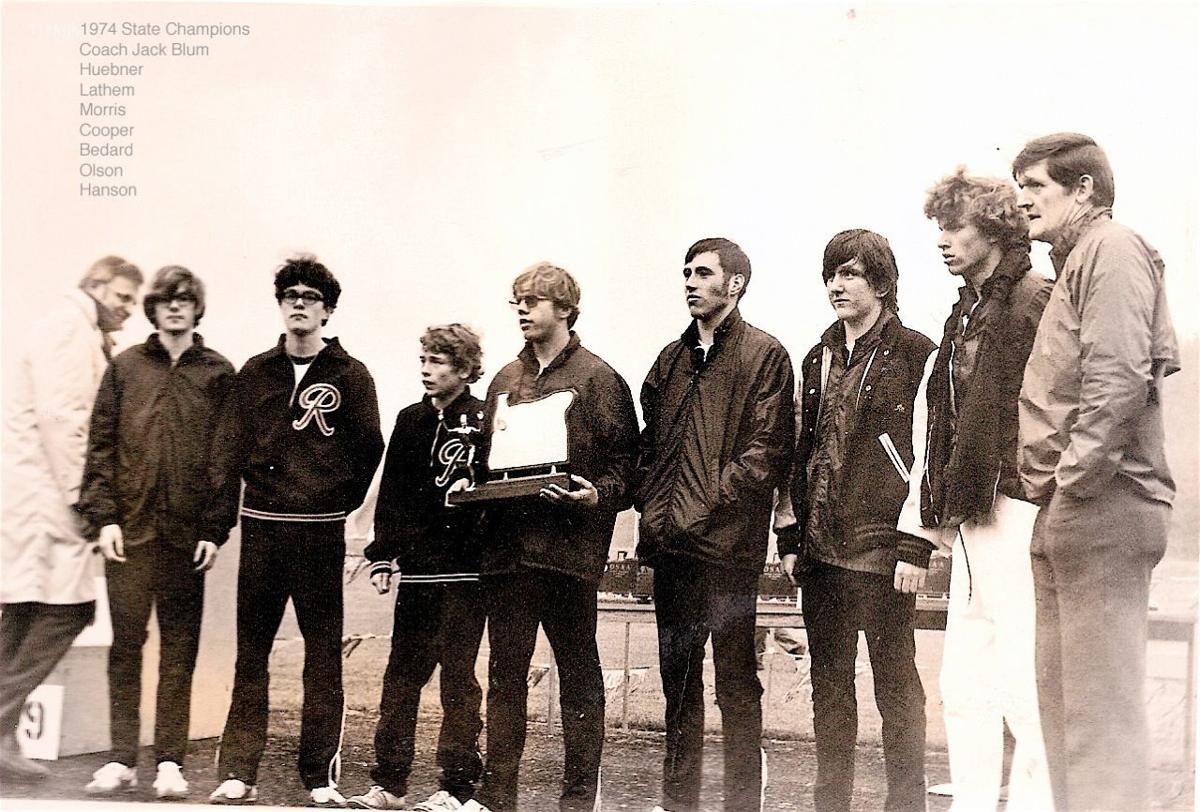 Iris Cripps of Glendale, right, runs with Camas Valley’s Alyson Barrett during the Class 2A/1A state cross country championships at Lane Community College in 1993. Cripps won the last of her three straight state titles that season, while Barrett ran to a state crown in 1996.

of Oakland won the

Oakland’s Jack Catton, left, sprints to the finish line against Matt Underwood of Gilchrist on his way to winning the Class A/B state title in 1983. The Oakland boys also won the team crown.

The OSAA goes back to 1949 on the boys’ side. Mark Robbins of Roseburg won the first of his two straight individual titles in 1953, and 14 more county runners would follow as state champions.

The Reedsport boys earned four consecutive titles from 1960-63 and also finished first in 1974, Oakland went back-to-back in 1982-83 and Canyonville Academy (then Canyonville Bible Academy) ran to championships in 1977 and 1992.

Jack Blum coached the Brave to Class A-2/B crowns at Willamette University in Salem from 1960-62, then returned to lead them to the AA championship at Lane Community College in Eugene in 1974. Harlin Millikin was Reedsport’s coach in 1963.

Lynn Faircloth placed second individually and Gene Faircloth finished fourth in the 1960 meet. Reedsport posted a score of 35 points in the 1.8-mile race, comfortably ahead of second-place Philomath (84).

The Brave cruised to the 1961 championship with a score of 38 points, with Pleasant Hill (91) a distant second. Lynn Faircloth won the individual title with a time of 9:25.1, followed by Gene Faircloth (second) and Chuck Knowlton (ninth).

In 1963, Faircloth wrapped up his prep career with a victory in 9:17.0. Wayne Jorgenson (fourth) and George Gardner (ninth) also finished in the Top 10. The Brave (55) finished nine points ahead of the Billies.

"Jack Blum was a great coach. We worshiped the ground he walked on," said Huebner, who's a 1975 Reedsport grad. "He took kids out of the hall who he thought could be built for running. He made it fun."

Canyonville rolled to the 1977 championship under Roger Shaffer with 24 points, placing three runners in the Top 10. Union (82) was second.

“That was the lowest team score ever recorded in any state meet at the time,” Shaffer said. “Total domination.”

“That 1977 team was in a class by itself,” Shaffer said. “It was an incredible collection of talent, if you go down the line. A super dedicated group.”

“There were two super stars on that team in Knight and Carter,” Shaffer said.

“I felt pretty comfortable at about two miles,” Lind told The News-Review afterwards. “I wasn’t going to be influenced by anything today — the weather, the competition. There weren’t going to be any excuses today.

“As far as being second last year is concerned, it was enough of an incentive for me. It made me more hungry.”

“Some of those kids trained pretty hard over the summer to improve on the year before, it gave them a start going into the (1982) season,” Baird said. “It was a junior-dominated team and they came back the next year and won it again.

“I didn’t expect to see us as the state champion. Roger Shaffer said at one of our meets he thought we had a state championship team, and that kind of surprised me. We competed well.”

“Brandt was really motivated, he put in a lot of miles,” Baird said. “We didn’t always agree on how we should go (with race tactics). He liked to start fast, but I tried to get him to pace himself a little bit. I lost that fight, but can’t argue with the results.”

Oakland had a score of 66, 10 in front of second-place Gilchrist.

“Jack came out for cross country in order to train and get tough for wrestling,” Baird said. “Wrestling was his sport, but by the time he graduated he told me he liked cross country more than wrestling.”

In 1984, LaFleur gave Oakland three straight individual state champions in cross country with a victory in 17:06.4, winning the race by 35 seconds on LCC’s muddy course.

“We had some real quality kids during those years,” Baird said. “They were willing to put themselves out there, no excuses. They were students and gentlemen.”

Shaffer and Mark Banducci coached the 1998 Canyonville girls team to the Class 2A/1A state crown. The Pilots edged Oakridge by three points with a score of 53.

“The course was very slippery and muddy,” Carrie Banducci told The News-Review following the race. “It got even worse on the second lap, but I felt like I had a little left and it was the last race of the season so I wanted to give it all I had.”

“That team was a long, long story,” Shaffer said, crediting Mark Banducci for playing a big role in the success of the squad. “Carrie Banducci was the star of the team. We knew we had three or four decent runners, then we picked up a couple of others.

“We knew (state) was a tossup between us and Oakridge. Ashley (Watkins) had the heart of a tiger. She passed three or four runners in the last 100 meters, and that’s probably the reason we won the championship.”

Shaffer said the 1970 Canyonville girls team is recognized at the boarding school in South County as an Oregon cross country champion. The Pilots won the “Oregon Invitational” — a non-sanctioned OSAA meet — at the Roseburg VA course with a score of 37 points, 41 in front of runner-up Burns.

Glendale each had two three-time state individual champions in cross country: Rosa Gutierrez from 1978-80 and Iris Cripps from 1991-93.

Iris Cripps and her brother, Tai, are the only sibling duo to win state cross country titles in the same year (1993).

“I’m glad we did it,” Tai Cripps told The News-Review. “This is special.”

Iris Cripps, competing in her final state cross country meet, avenged a 13-second loss to freshman Alyson Barrett of Camas Valley at district with a come-from-behind victory in the final 800 meters. Iris Cripps was timed in 19:17.7 for 5,000 meters.

“I was hurting pretty bad on the soccer hill, but coach (Jeff Hess) was yelling at me ‘to go after what you want’ and I had to focus mentally,” Iris Cripps said. “This one is much more satisfying because I had to work hard. I had someone with me, and it felt great to compete and succeed.”

Roseburg High cross country teams happy to be back together

Roseburg High cross country teams happy to be back together