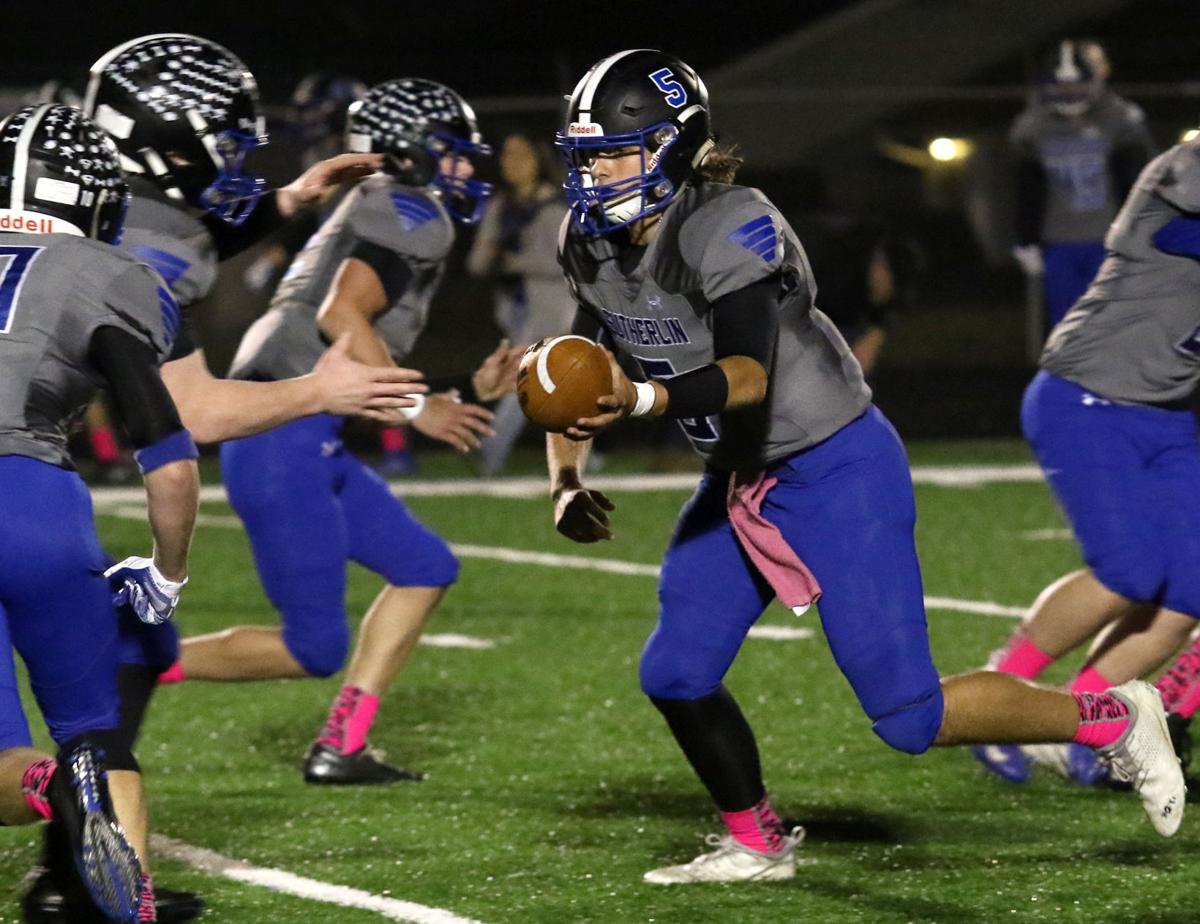 Sutherlin quarterback Tehgan Pacini hands the ball off to Josh Davis against Santiam Christian in Sutherlin in 2019. 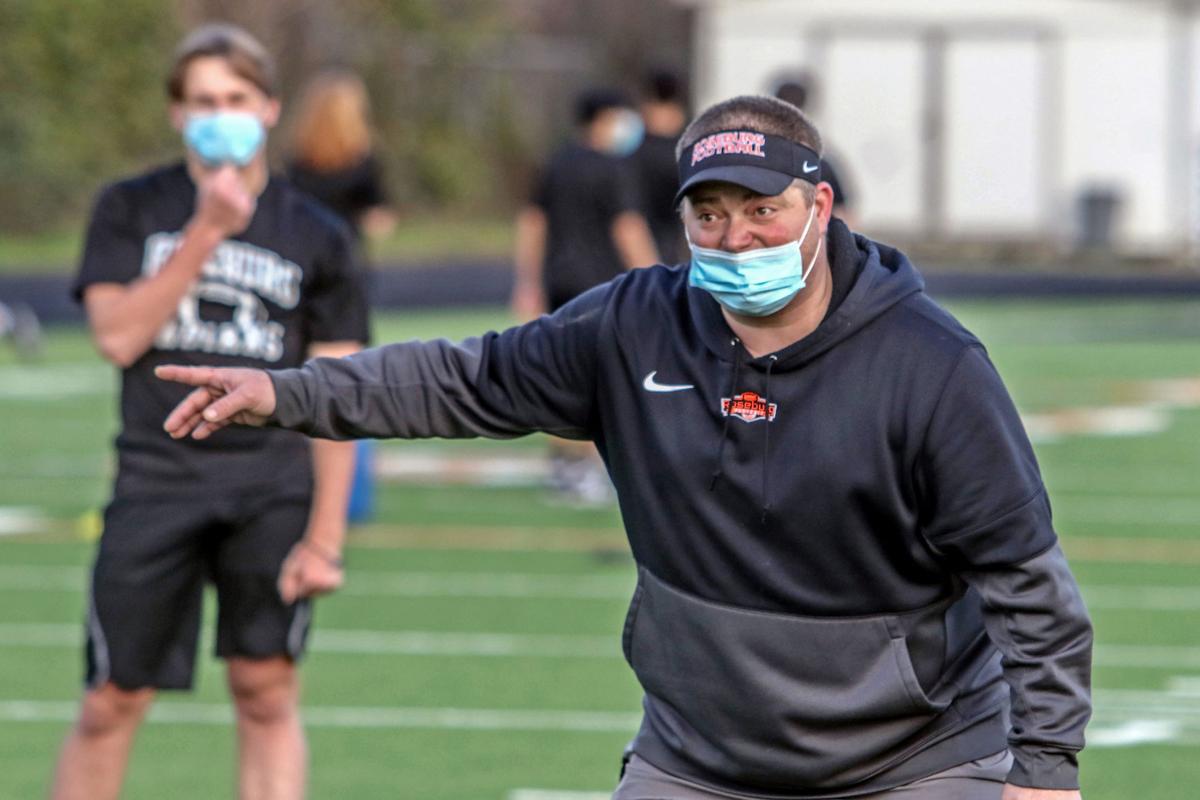 Roseburg head coach Dave Heuberger gives instruction to athletes during a workout by the RHS football team at Finlay Field in January. 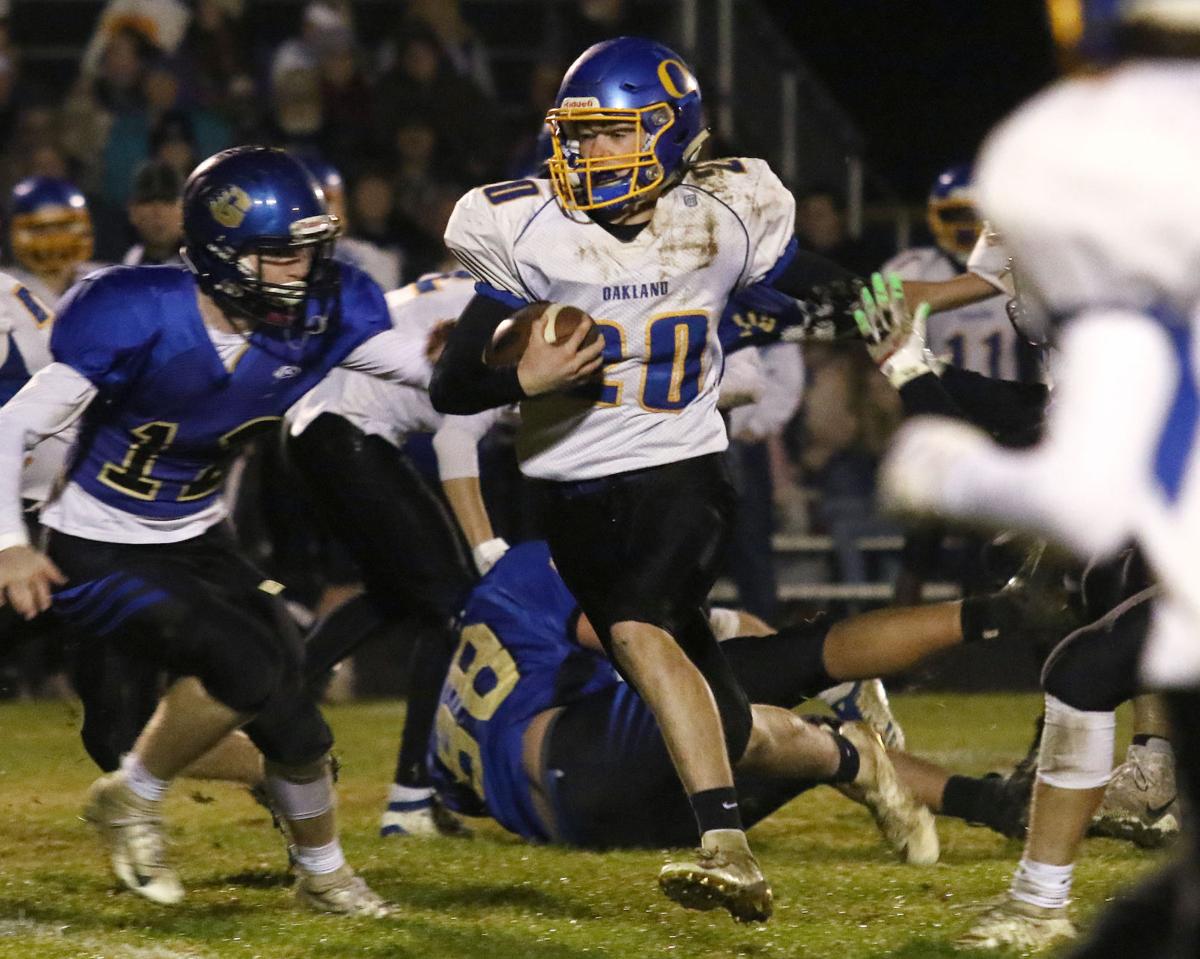 Oakland’s Corbin Picknell runs the ball against Glide during a Class 2A playoff game in Glide in 2019. 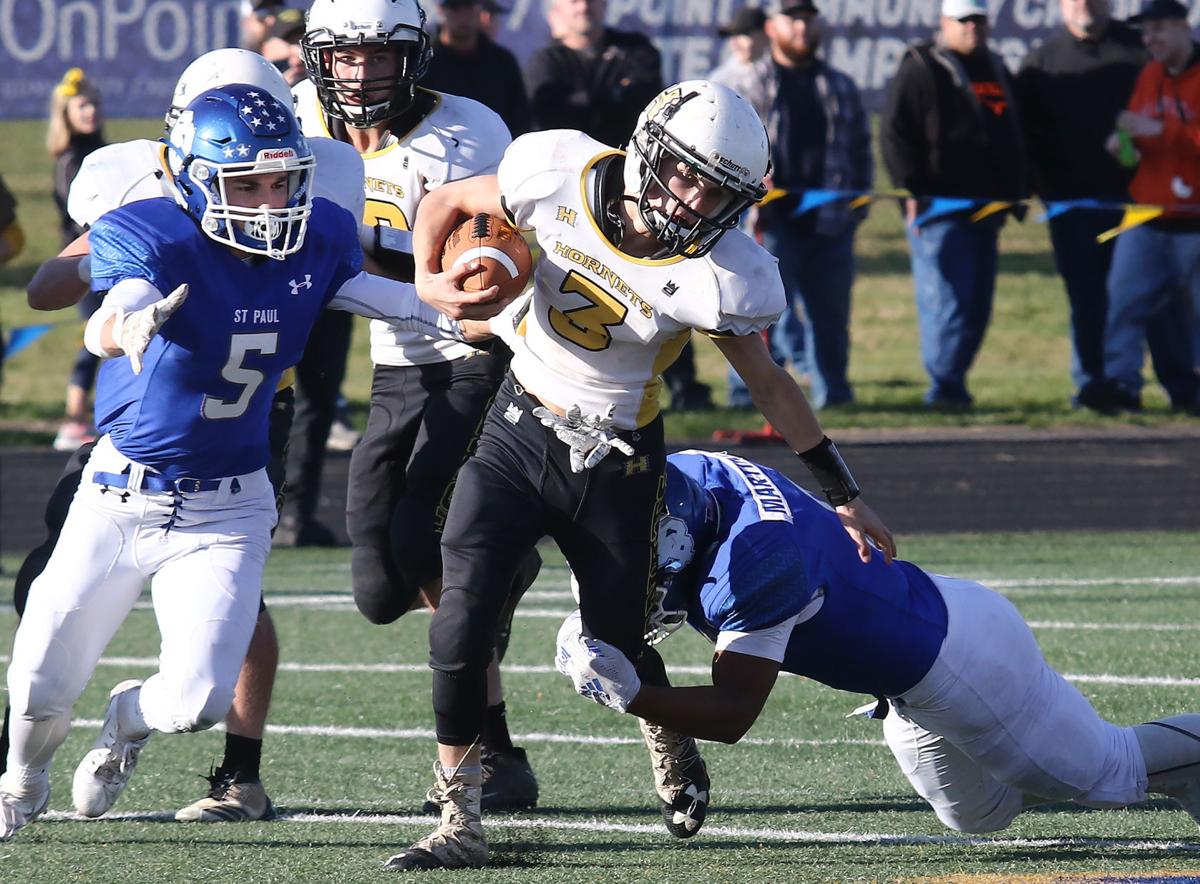 Camas Valley quarterback Jared Standley fights to get past St. Paul defenders during a Class 1A eight-man semifinal playoff game at Cottage Grove High School in 2019.

Sutherlin quarterback Tehgan Pacini hands the ball off to Josh Davis against Santiam Christian in Sutherlin in 2019.

Roseburg head coach Dave Heuberger gives instruction to athletes during a workout by the RHS football team at Finlay Field in January.

Oakland’s Corbin Picknell runs the ball against Glide during a Class 2A playoff game in Glide in 2019.

Camas Valley quarterback Jared Standley fights to get past St. Paul defenders during a Class 1A eight-man semifinal playoff game at Cottage Grove High School in 2019.

If the coronavirus doesn’t get in the way, 13 of Douglas County’s 14 high school football teams are scheduled to play their season openers on March 5.

Riddle has a bye. No spectators will be allowed at the games due to COVID-19 restrictions.

Yoncalla and North Douglas, who both play Class 1A eight-man, are combining their squads for the shortened 2021 season due to low numbers.

Roseburg, the county’s lone 6A school, is beginning its fifth year under head coach Dave Heuberger.

“The kids were excited — more relieved than anything (about hearing a football season is scheduled to happen),” Heuberger said. “A lot of them have stuck with it eight months (working out), hoping for that moment. They’re excited to move to the next step.

“It doesn’t matter who we play. To get to the point where we’ll be able to get on the field Friday night, that’s going to be something special for the kids. You want to see them rewarded.”

Douglas and Sutherlin are 3A Far West League rivals. The Trojans have a new head coach in Robin Knebel, a former Roseburg High School standout lineman who went on to play at the University of Oregon.

“We had some senior boys crying (upon the announcement),” Sutherlin 11th-year coach Josh Gary said. “It’s been a tough year on these kids. To get to play football is a huge thing, I can’t exaggerate that. What’s more normal than football on Friday night?

“The kids deserve to play. I told them if we get to play that first game against Douglas, that’s a gift. But if one kid gets COVID, we’re all shut down. That’s the risk we’re taking.”

South Umpqua is the county’s other 3A school. Steve Stebbins is entering his eighth season as head coach.

“I was happy for our kids,” Stebbins said. “They were chomping at the bit, but not sure what was going to happen. Now that we’re cleared, we’re going to amp it up a little bit and go.

“Our priority is just to keep getting better every day. It’s muddy and wet, but the kids are still running around having a good time out there.”

Oakland, Glide and Reedsport are 2A schools. Eric Savage is the new head coach of the Wildcats, while Bill Shaw is in his first year in charge of the Brave.

Shaw, a 1980 Yoncalla graduate, is a former head coach at Yoncalla and Elkton.

“I don’t know if anybody knows how significant this is for young people, especially at a small school,” Shaw said. “It feels really good to know we’ll get a chance to play a little bit. I went from 14 to 23 kids in the weight room, so the enthusiasm is building.

“It’s going to be weird playing in this (cold) weather, but it’ll still be a great experience.”

Ben Lane, who guided Oakland to the state championship in 2012, is back for his 11th year.

“The kids are excited, of course,” Lane said. “They want to get back out there, and it’s huge to get them out doing something. The kids know they’ve got five-six games if it goes perfect and the mental approach will be a little different.

“Football is football. We’ll approach it the same, we’ll go after it the same. Hopefully we’ll field a great team and play with the tenacity we’ve had in the past.”

Matt Bragg, entering his 12th year at Yoncalla, is the dean of county football coaches. He’ll combine knowledge with JJ Mast, in his eighth season at North Douglas.

There’s plenty of familiarity with each other. Both played at Yoncalla (Bragg graduated in 1992 and Mast in ’94), and N.D. assistant Shawn McHaffie is another Yoncalla alum (’96).

“We’re going to be friendly for a year,” Bragg said with a laugh. “Actually, I’m looking forward to it. I like the way things are working out. You wouldn’t know we’re rivals, the way the kids are acting.

“The kids just want to play. We want to be the best team of the teams we’re playing.”

To date, each school has nine players on the roster. The Yoncalla coaches will run the offense and the North Douglas coaches will work with the defense. All home games will be played in Yoncalla.

“The kids are just happy to be out there again,” Mast said. “A month ago we didn’t think we’d be playing. I’m glad the OSAA was patient, and held on. The teams are coming together really well.”

Camas Valley, a perennial state power during the past decade, is looking forward to hosting its first official night game with Days Creek under its new lights. The Wolves have a new head coach in Travis Fuller.

“The kids were very happy. We’ve been going for so long (with practices) and needed that good news,” C.V. second-year coach Keri Ewing said. “We did a lot of stuff from July until October.

“We want to beat everyone we play, want to compete.”

Riddle’s new head coach is Clark Wozich. Robin Miller at Glendale and Jeremy Lockhart at Elkton are both in their second seasons.