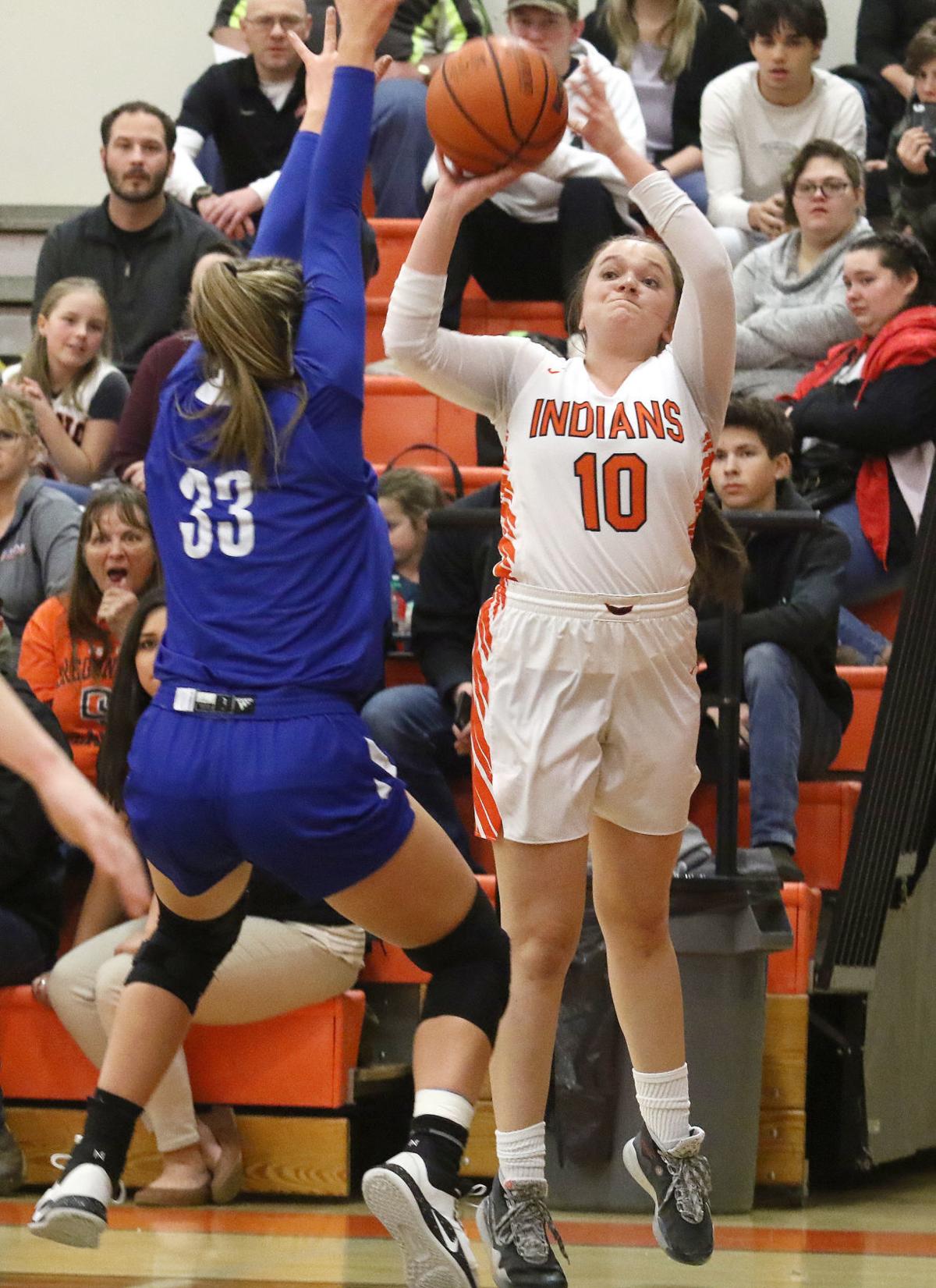 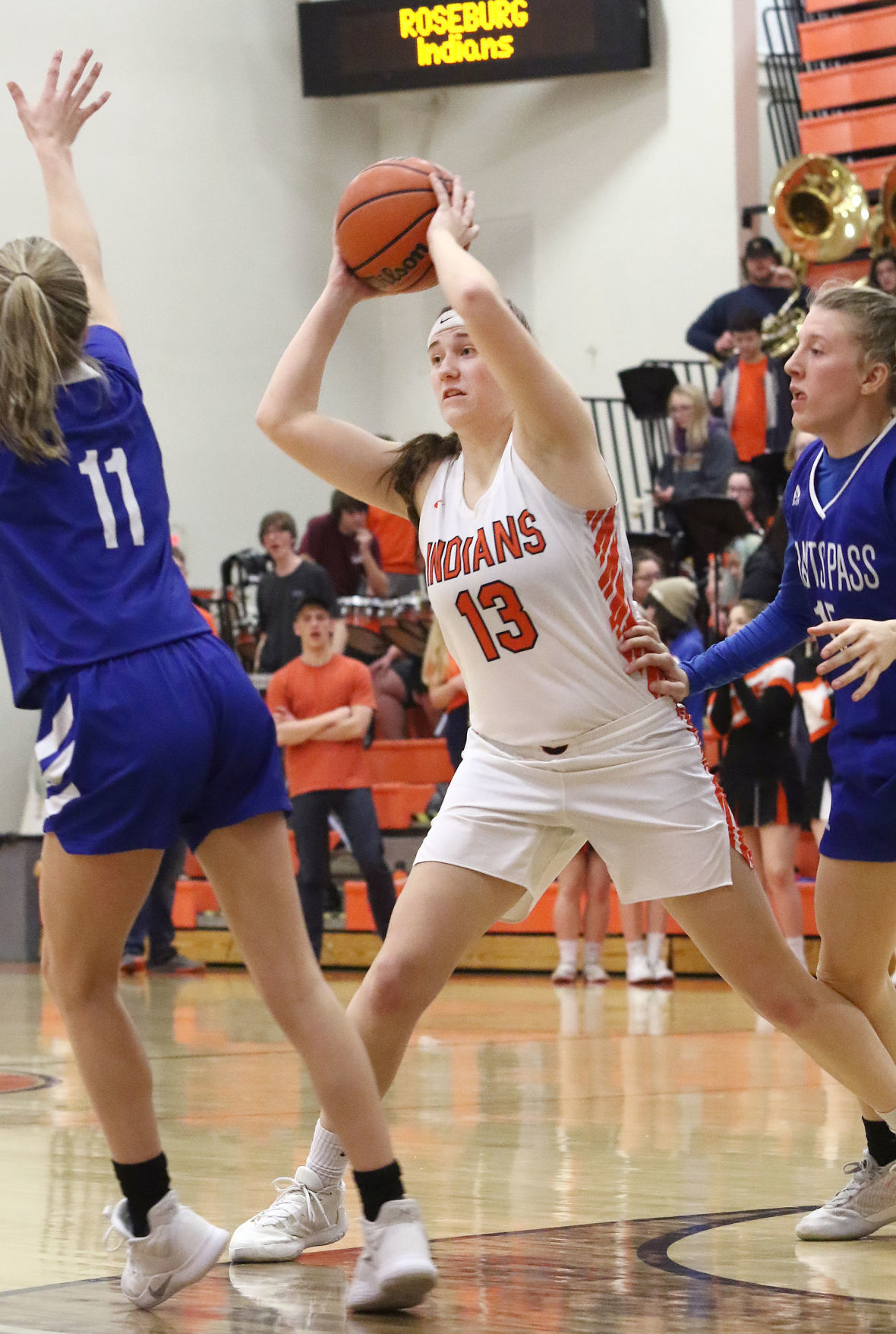 Roseburg post Katie Knudson passes away from Grants Pass’ Sophie Mock (11) and Camdyn Bruner during the first half Tuesday at RHS. 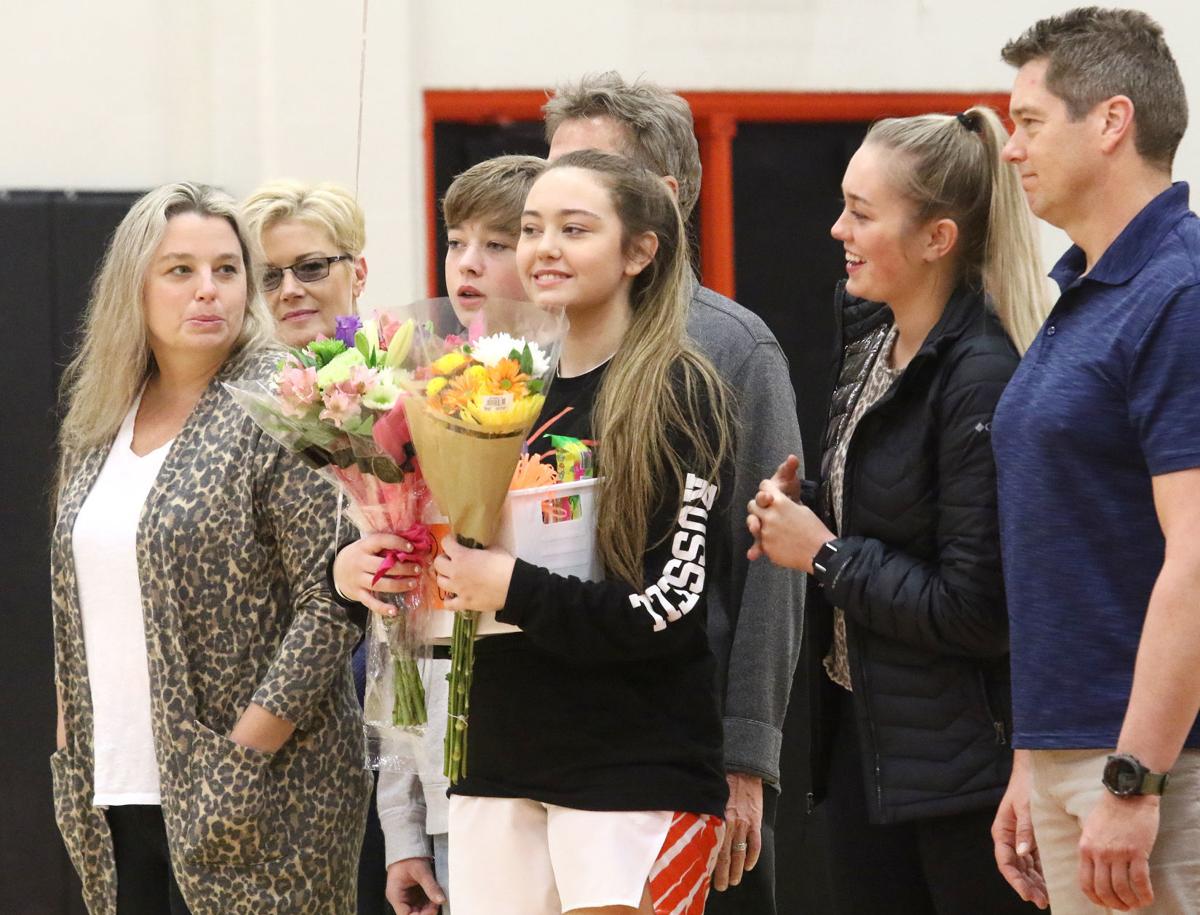 Roseburg’s Rylee Russell is joined by her family during a pre-game ceremony honoring the seniors on the girls basketball team Tuesday night at RHS. 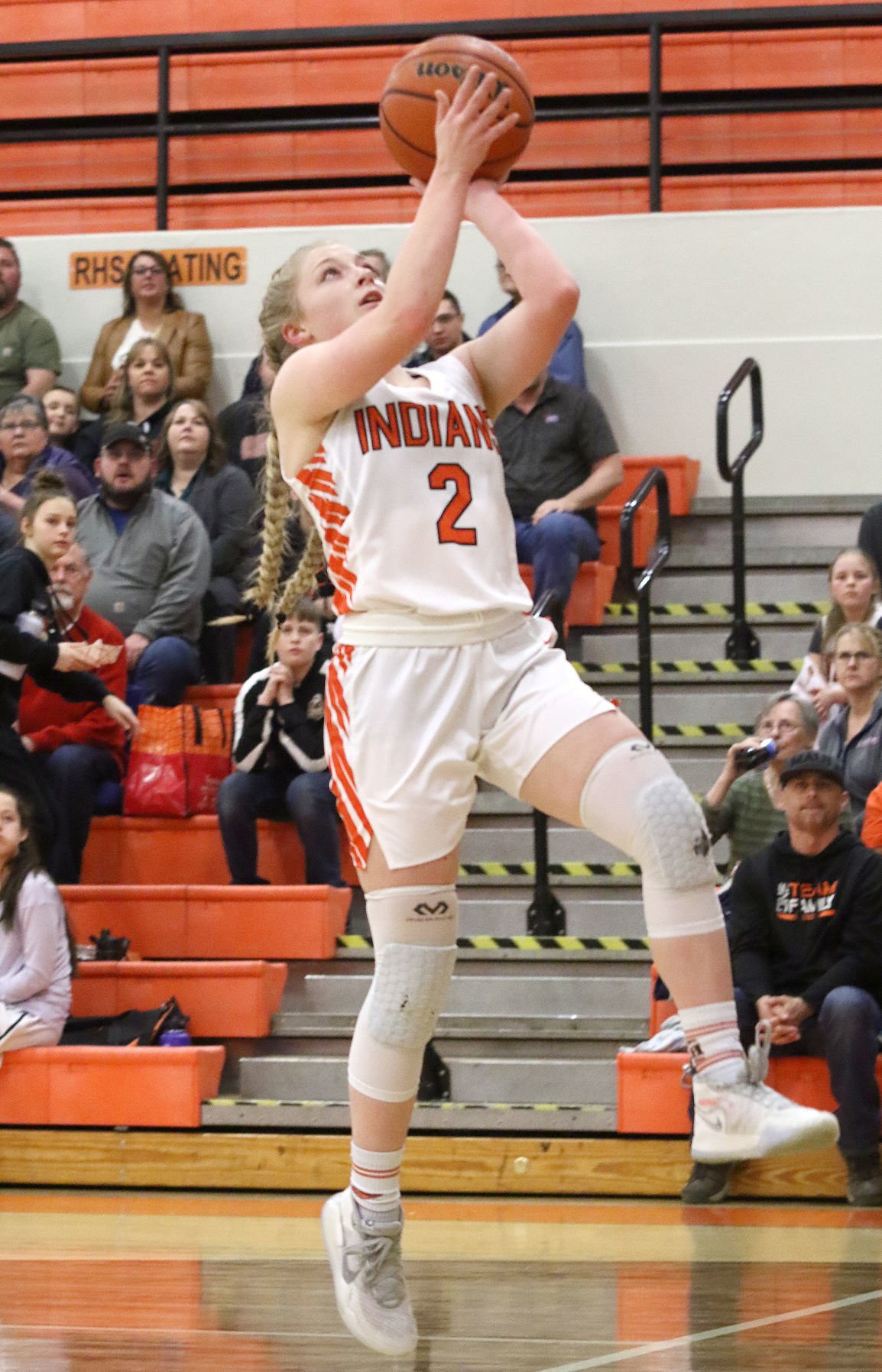 Roseburg guard Emma Vredenburg scores on a fast break after stealing the ball during first half play against Grants Pass Tuesday at Robertson Memorial Gym. 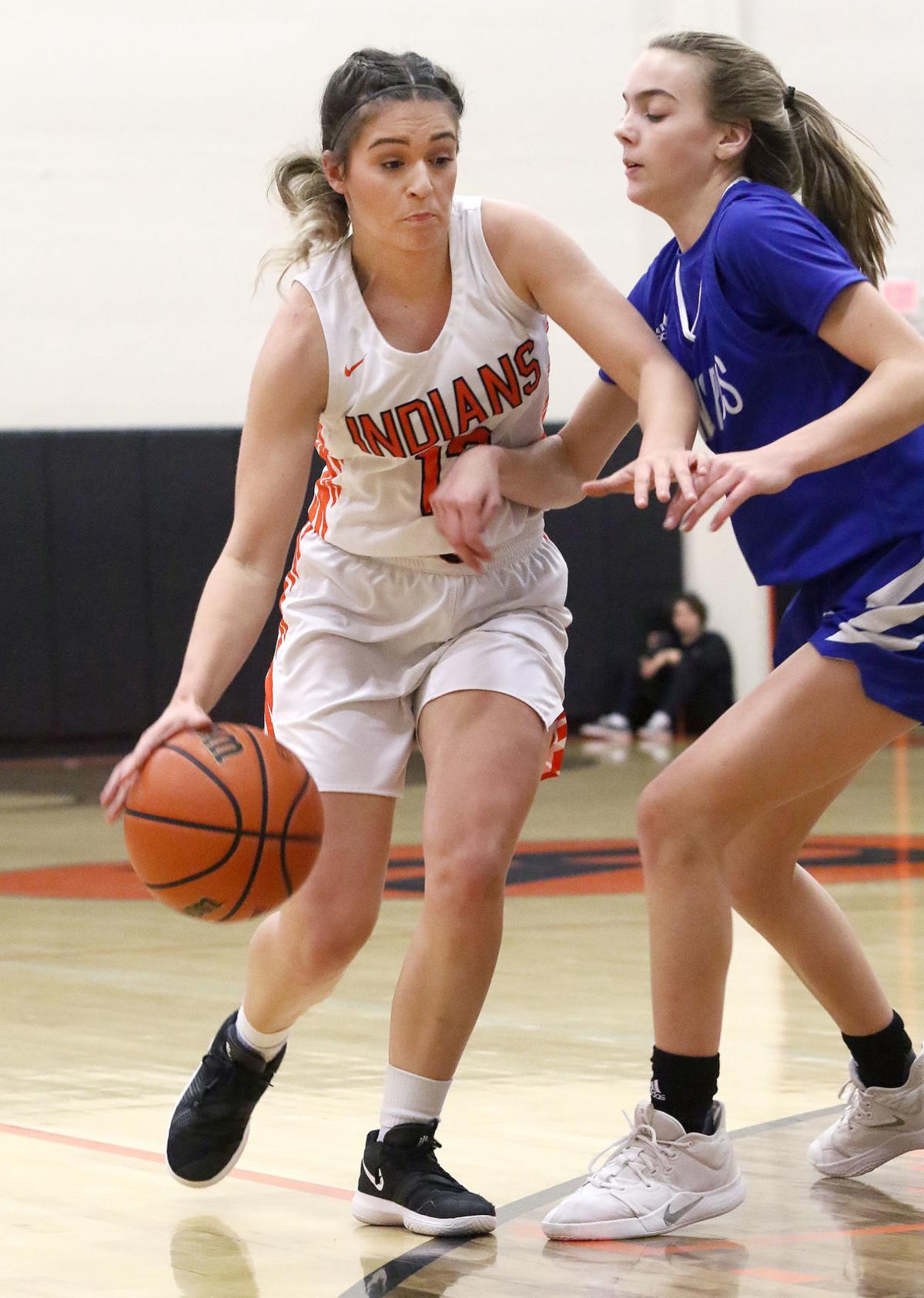 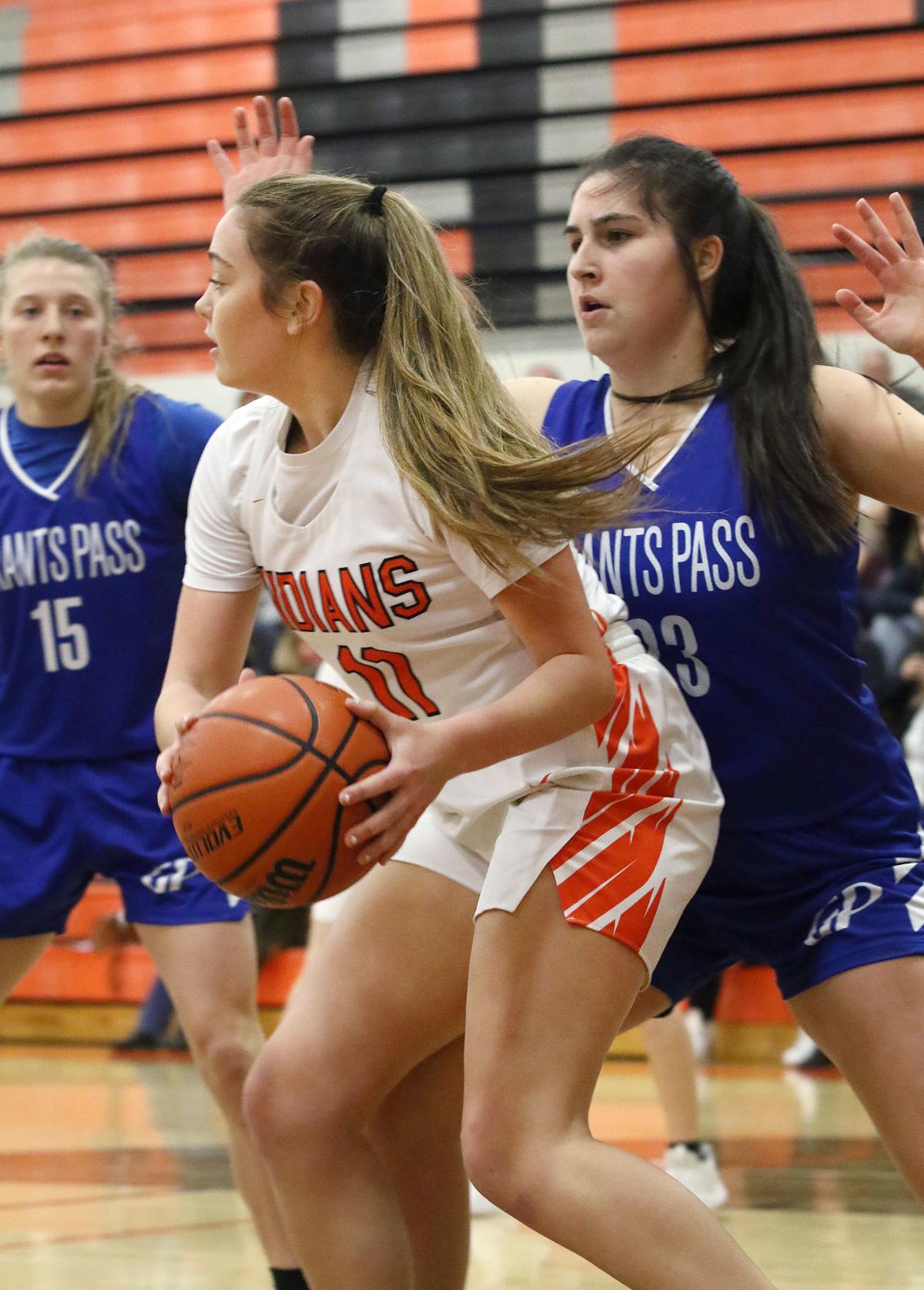 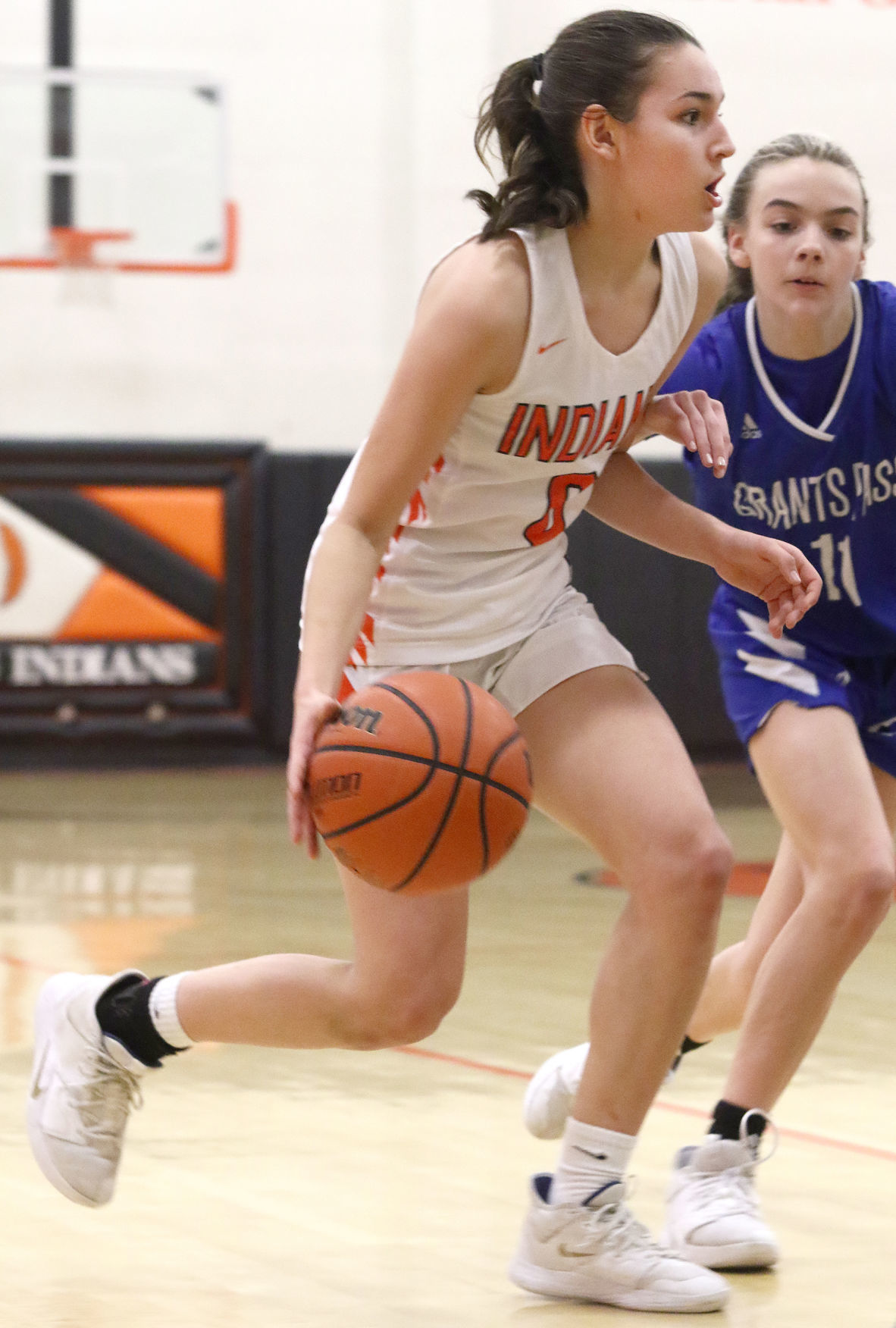 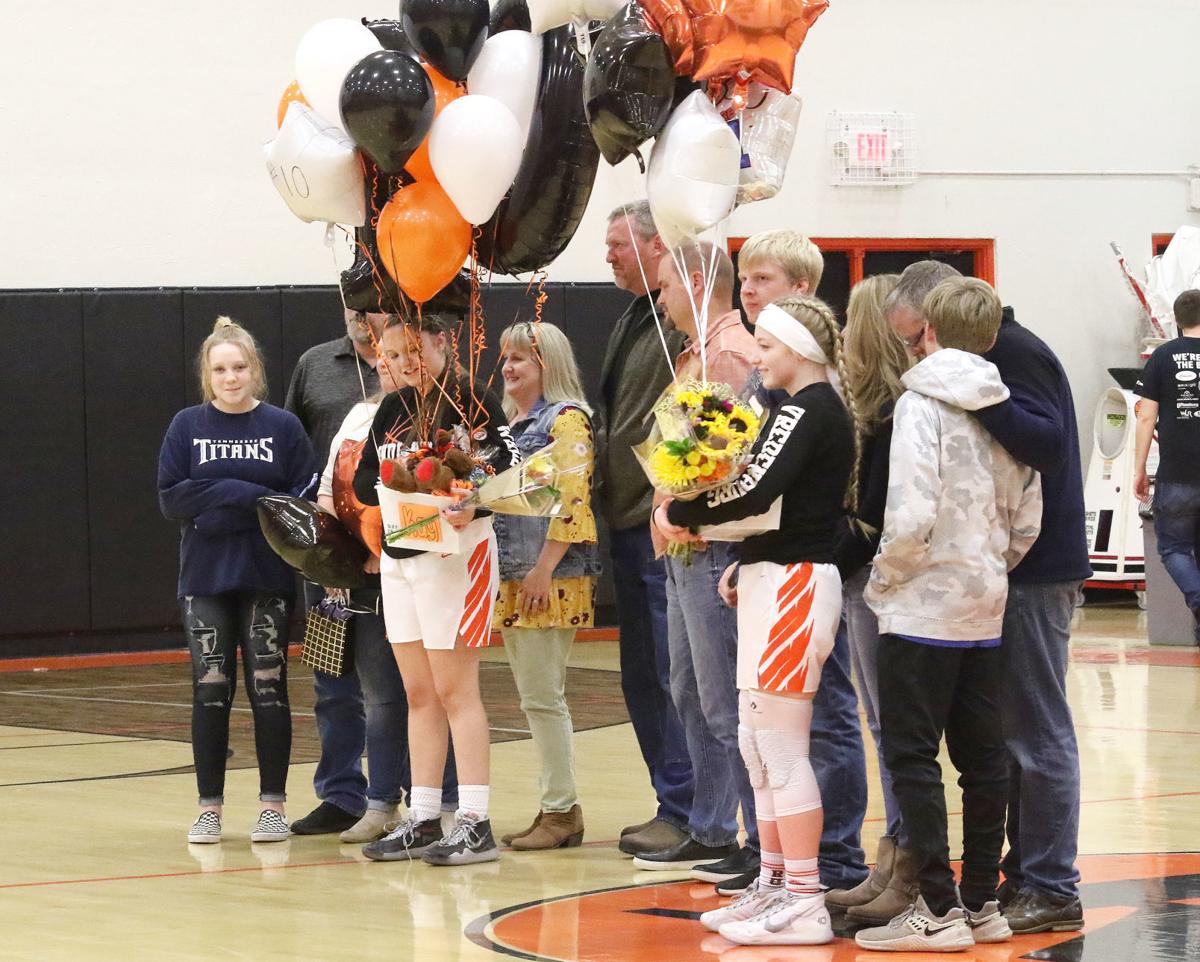 Roseburg post Katie Knudson passes away from Grants Pass’ Sophie Mock (11) and Camdyn Bruner during the first half Tuesday at RHS.

Roseburg’s Rylee Russell is joined by her family during a pre-game ceremony honoring the seniors on the girls basketball team Tuesday night at RHS.

Roseburg guard Emma Vredenburg scores on a fast break after stealing the ball during first half play against Grants Pass Tuesday at Robertson Memorial Gym.

But nine field goals won’t cut it at the Class 6A level as the Indians dropped a 43-26 decision to the Cavers in a Southwest Conference game Tuesday at Robertson Memorial Gym.

“We ran our offense most of the game and found a lot of open shots, but they just wouldn’t fall,” said senior guard Emma Vredenburg, who led Roseburg with nine points. “We still took as many as we could and worked really hard.”

“We did very well on our defense, but the offense wasn’t working as well as we’d hoped,” added senior guard Ericka Allen.

Grants Pass (10-12, 3-6) picked up its third conference victory and won its sixth straight over Roseburg, while the Tribe (2-21, 0-9) remained winless in the SWC. Roseburg ends its season at North Medford Friday.

The game was closer than the final score. The Indians got a pair of 3-pointers from Vredenburg and Kaylee White at the start of the third quarter and cut a six-point halftime deficit to 23-22.

Roseburg had two opportunities to take the lead, but Katie Knudson and White missed good shots.

Roseburg only managed one field goal and two free throws over the last eight minutes — both by Vredenburg. The Cavers scored all eight of their points in the fourth at the charity stripe.

“I’m not disappointed (with the effort),” Roseburg coach Dane Tornell said. “The shooting side of things is always a challenge for us, but we had no lack of open shots. We were taking great shots and moving the ball well. After the first three minutes, our defense was fantastic.

Knudson finished with six points and six rebounds. Rylee Russell was the top rebounder for the Indians with seven.

“We had a couple of turnovers that Grants Pass converted on and they hit a big three, and that shut down our emotional level a little bit (in the third),” Tornell said. “Our girls came out ready to fight. For us and our third quarter curse, that was pretty encouraging to see them come out and get a couple of quick scores.”

Roseburg honored five seniors and their families before the contest: Vredenburg, Knudson, Allen, White and Russell.

“My teammates,” replied Knudson, when asked what she likes most about this year’s team. “I love these girls, do or die. I honestly don’t know what I’d do without them.

“(Senior night) was very emotional. These girls have been my girls since our freshmen year. Being a third-year varsity player, it hits home playing on this court and I’m going to miss it.”

Vredenburg said, “I actually handled it (senior night) better than I thought I would. If this would’ve been my last game I would’ve gotten way more emotional.”

Allen admitted she shed a few tears after the game.

“I’m going to miss playing with the seniors and underclassmen,” she said. “I definitely like the chemistry I have with the seniors. We’ve all been playing together since the eighth grade, so it’s been really nice.”