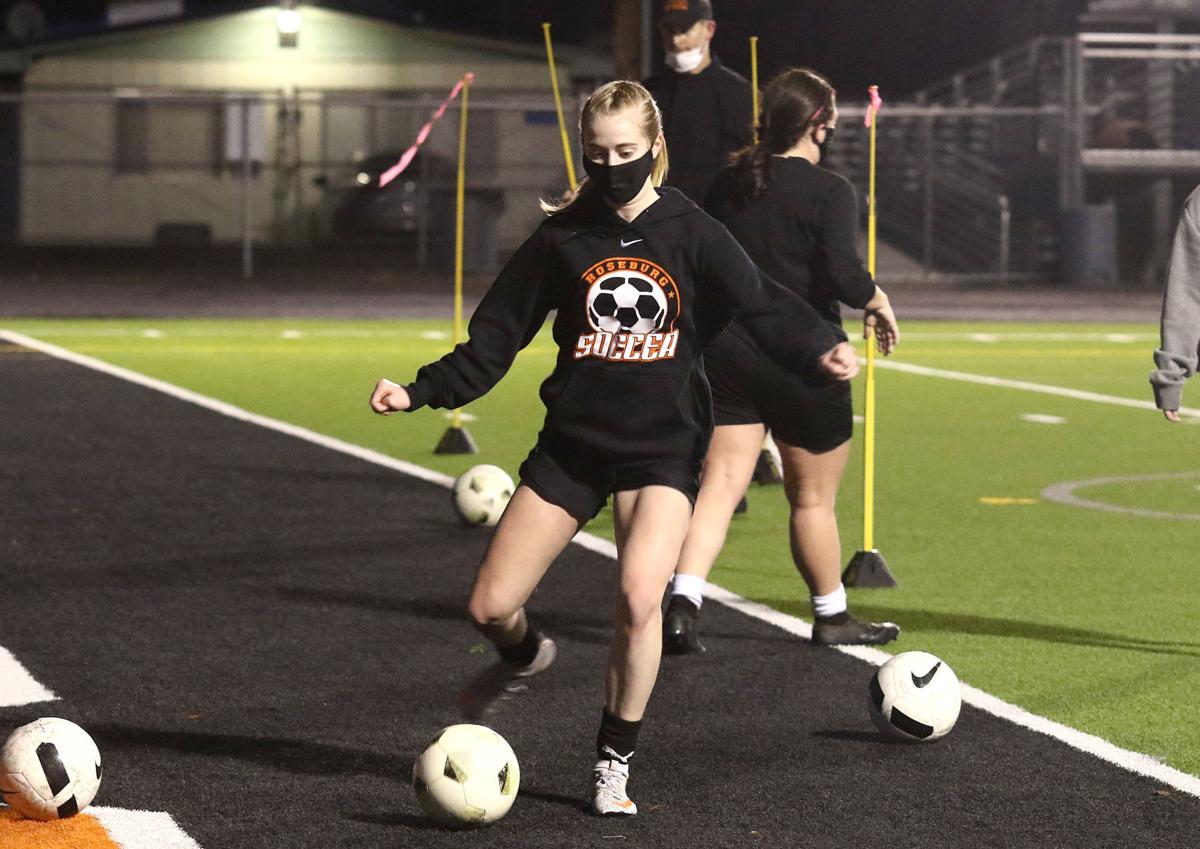 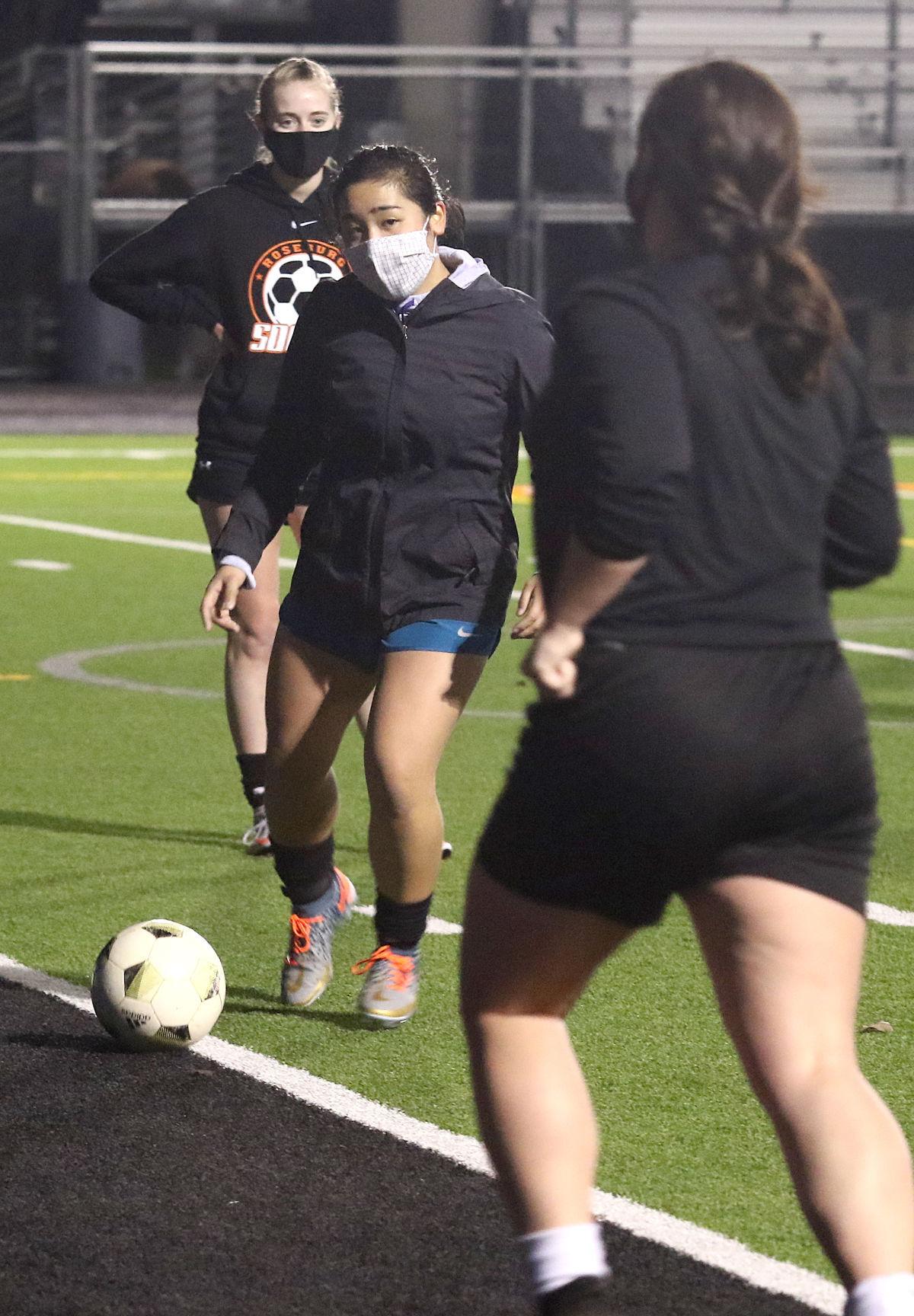 Camille Dela Cruz, middle, and teammates put in some work during practice on Wednesday night at Finlay Field. 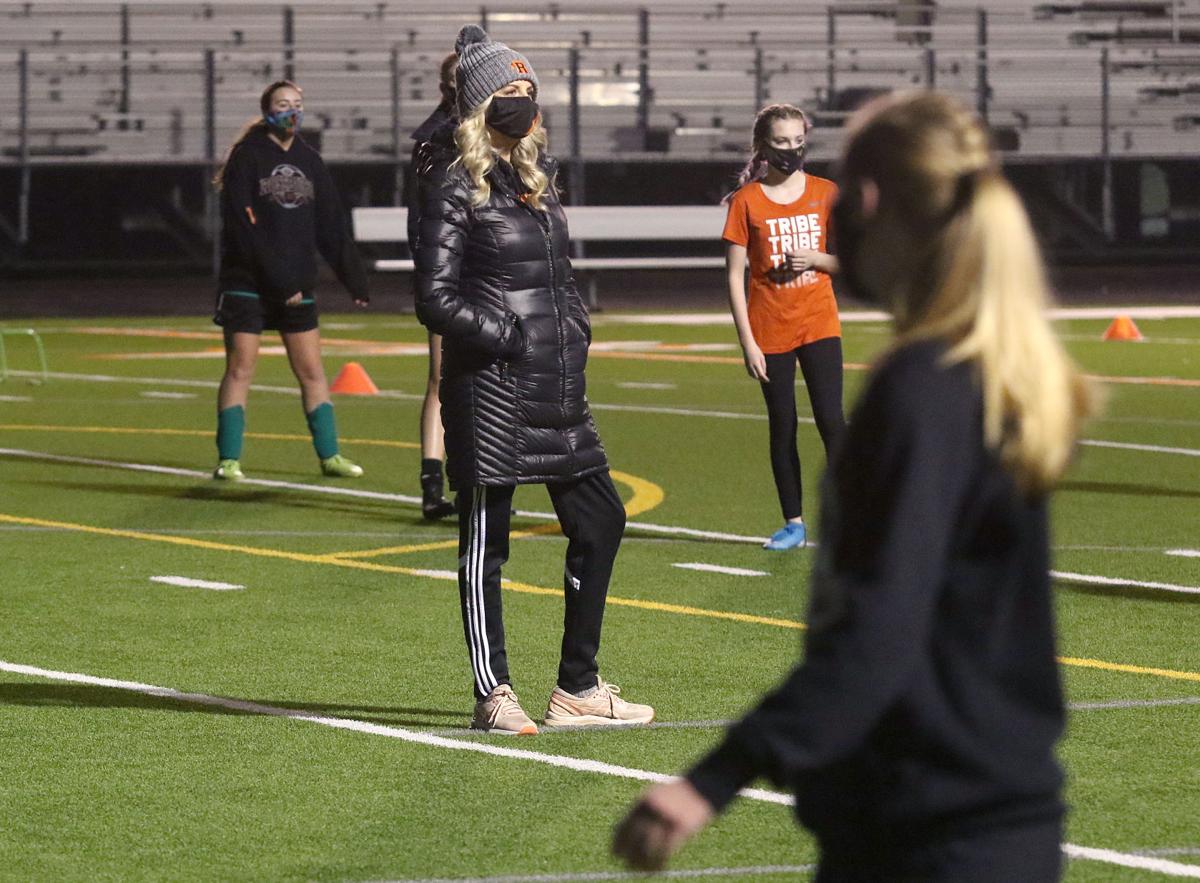 Roseburg High School head girls soccer head coach Kristin Parks looks on as the team runs through drills at Finlay Field on Wednesday night. Parks is in her third season with the program. 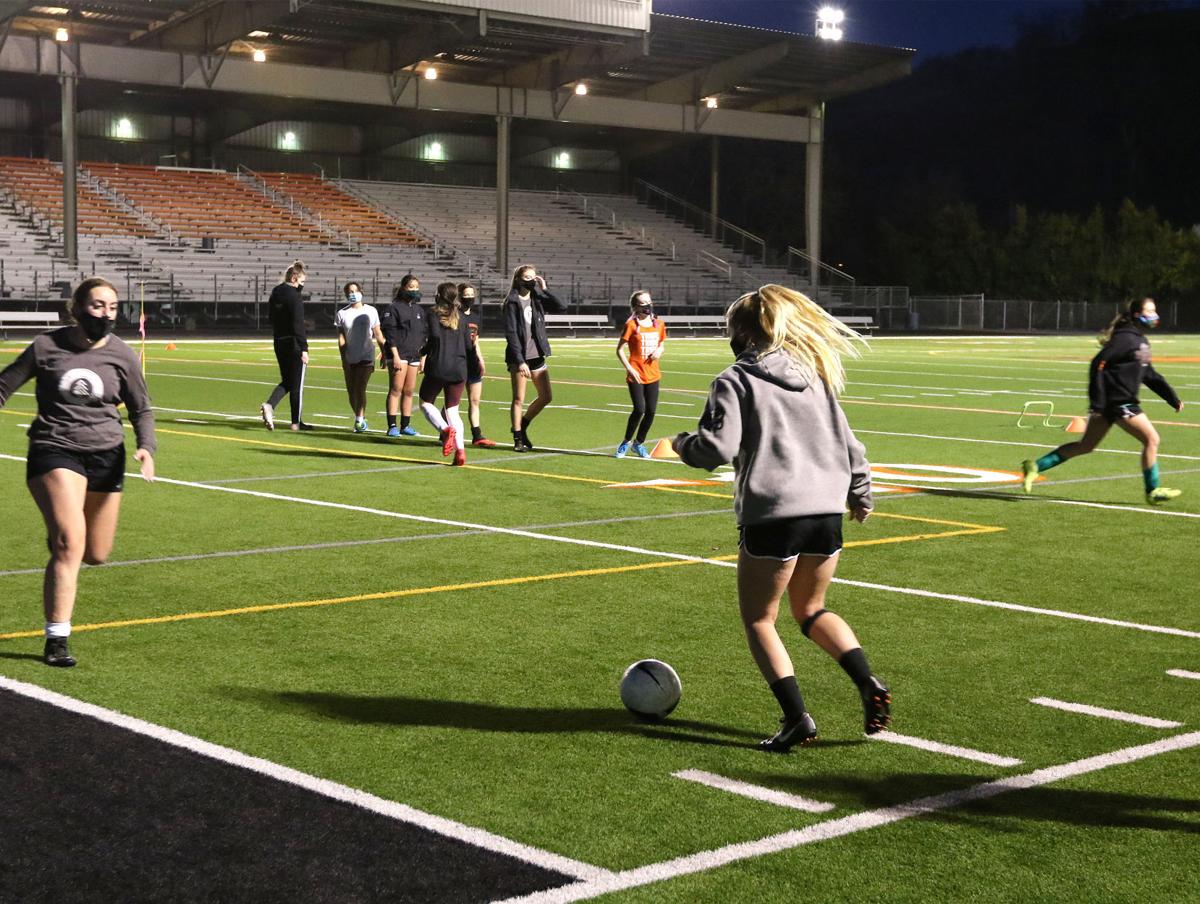 The Roseburg High School girls soccer team works out under the lights on Wednesday night at Finlay Field.

Camille Dela Cruz, middle, and teammates put in some work during practice on Wednesday night at Finlay Field.

Roseburg High School head girls soccer head coach Kristin Parks looks on as the team runs through drills at Finlay Field on Wednesday night. Parks is in her third season with the program.

The Roseburg High School girls soccer team works out under the lights on Wednesday night at Finlay Field.

The Roseburg High School girls soccer team took a big hit numbers-wise, resulting from the impact of the coronavirus pandemic.

Head coach Kristin Parks said on Wednesday night during a practice at Finlay Field that 15 players who were members of the varsity or junior varsity team in 2019 didn’t return this season for various reasons. With no guarantee of a season this school year, some of them opted to get jobs.

Parks, in her third year with the program, currently has 16 to 18 players available for the tentative upcoming 2021 winter/spring season which begins on March 2 against Ashland at home. The Indians aren’t expecting to field a JV team.

Roseburg lost its normal 2020 fall season due to the pandemic, so the Oregon School Activities Association pushed the season back in order to try and get each team some form of a season. Official practice begins on Feb. 22, assuming the Oregon Health Authority and Gov. Kate Brown keep the green light on.

“It’s a totally different team, this makeup of girls,” Parks said. “It’s been frustrating because I’m watching kids who have played soccer since they were five years old not be able to compete in their junior and senior season. My heart is sad for those girls because you know they had to make some really tough decisions.

“It’s just tough for them to make these kind of choices at such a young age, when they should be enjoying their senior year — the final games and senior night. Instead the world is totally different for them now.”

This group isn’t feeling sorry for themselves. They’re just hoping to get to play and compete against other schools. Roseburg won’t play a regular Southwest Conference schedule, but face schools in southern Oregon — South Medford, North Medford, Grants Pass, Ashland, Crater and Eagle Point — if everything works out.

“We’ve had some great practices with these girls,” Parks said. “They’re very positive. It’s a very young team with not much depth and experience, but there are some strong athletes both mentally and physically coming up who are giving some of our older girls a push and that’s exciting to see.”

The Indians lost five seniors to graduation from last year’s team that finished 2-12 overall and 0-10 in conference. One of them was second-team all-SWC selection Kaitlyn Riley, Kristin Parks’ daughter.

Dela Cruz admitted losing the fall season was a blow, but she’s excited to be back on the field with her teammates.

“I love soccer. Especially because it was my senior year, it felt like another thing that I really enjoyed was taken from me by COVID,” Dela Cruz said. “It’s weird, I miss having it in the fall.

“It feels really good to be out here. It’s nice getting a good workout in, and it’s nice being around girls who have the same passion for the sport. The energy here ... every time I come out, I’m always excited. My mindset is to give it 100 percent. Give my all to the team and help the team improve.”

Carpenter is looking forward to a season, even if a six-week one.

“It was pretty disappointing that we didn’t get to play in the fall,” she said. “I enjoy playing soccer, and we lost playing time and experience time. For a lot of our inexperienced players, we lost a lot of valuable playing time.

“I think we have a decent team. A lot of inexperience, but they’ll get to the level of playing soccer and be able to adapt to the varsity level. We’re very connected and got each other’s backs, and we’ll have a pretty fun season.”

Van Acker feels the motivation remains the same, even without rankings and wins and losses not being as important during these trying times.

“It was pretty upsetting not having a fall season, but we’re doing pretty well now. We’ve kept it together,” Van Acker said. “Being older and looking at the team, bringing other people up is motivation for myself. I hope for the best ... some of these girls are new, but everyone has really good potential.”

“The important thing for me is teamwork,” Dela Cruz said. “Keeping each other positive and energetic, that’s more important than wins and losses.”

Kristin Parks is assisted by Matt Parks, Phil McAfee and Clarah Schaffer. Kristin Parks has a 5-22-1 record at Roseburg, 0-20 in SWC contests.

“At this point, it’s about getting these kids playing,” Kristin Parks said. “Letting them have some fun, burning off some steam from the last 12 months of craziness. We’ll have some tough games. We’ll get out on the field, and try and learn and improve.”