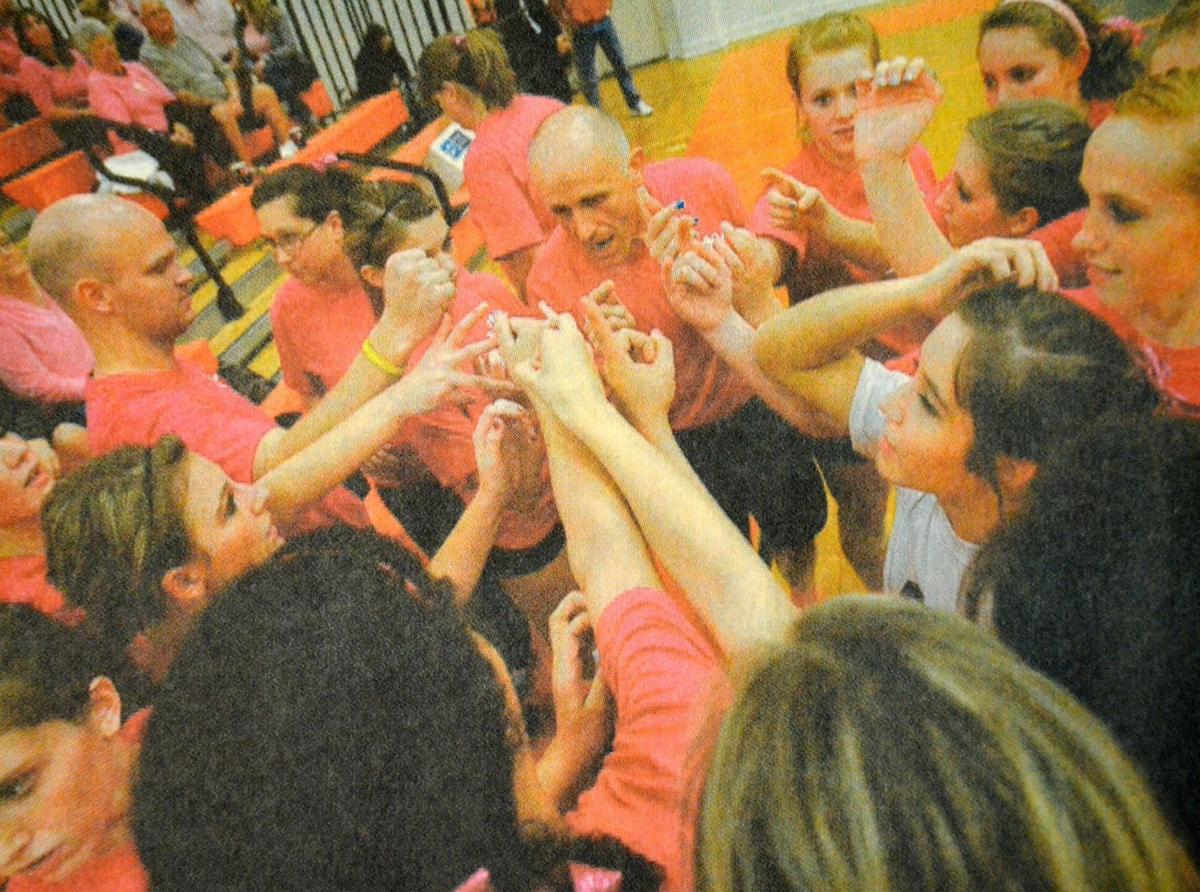 Roseburg High volleyball coach Bruce Myers breaks a team huddle before a match during his final season of coaching at RHS in 2012. 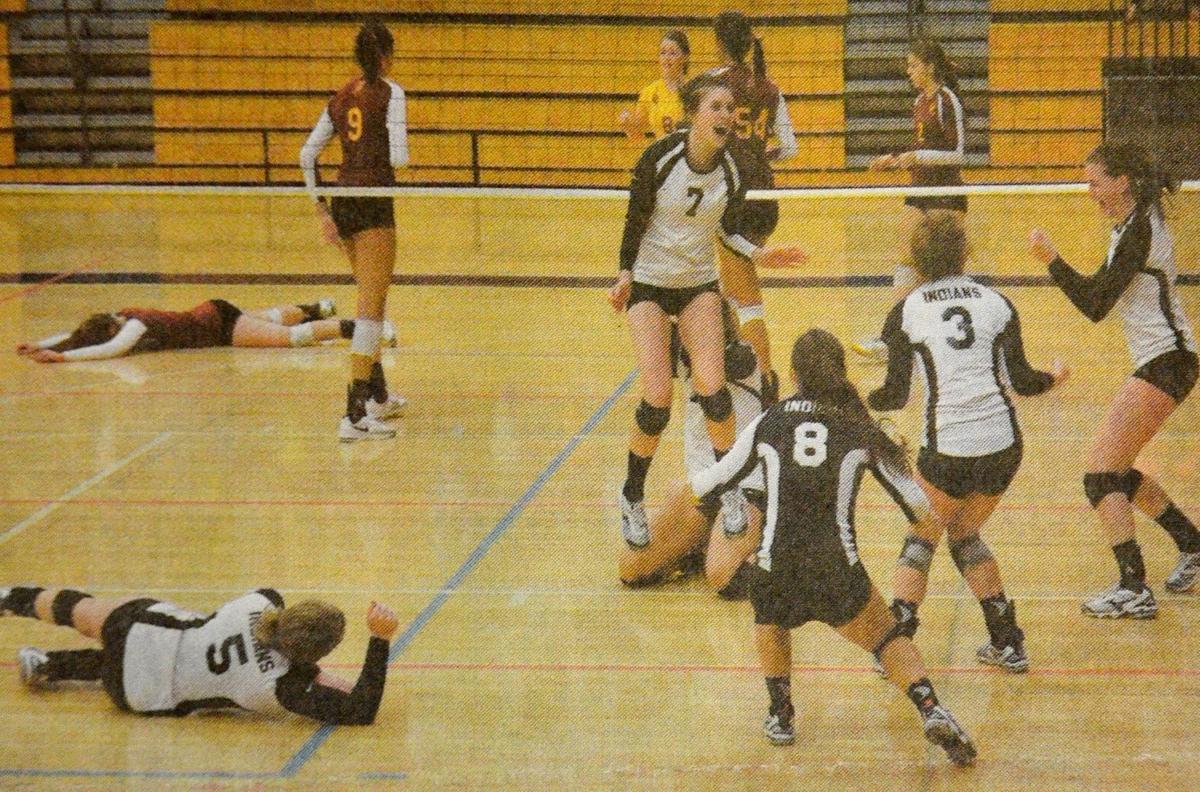 Raluca Gosman (7) celebrates with her Roseburg High teammates after the Indians’ semifinal victory over Central Catholic at the 2012 Class 6A state volleyball tournament in Hillsboro. 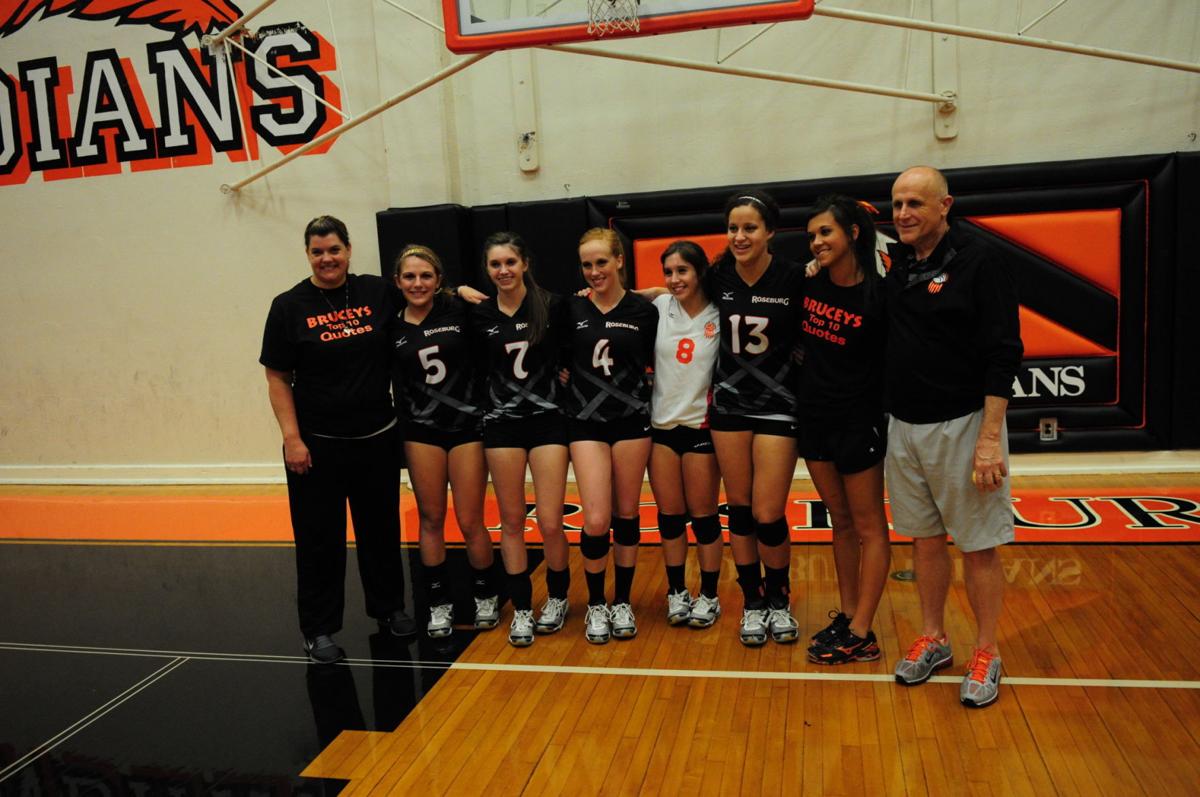 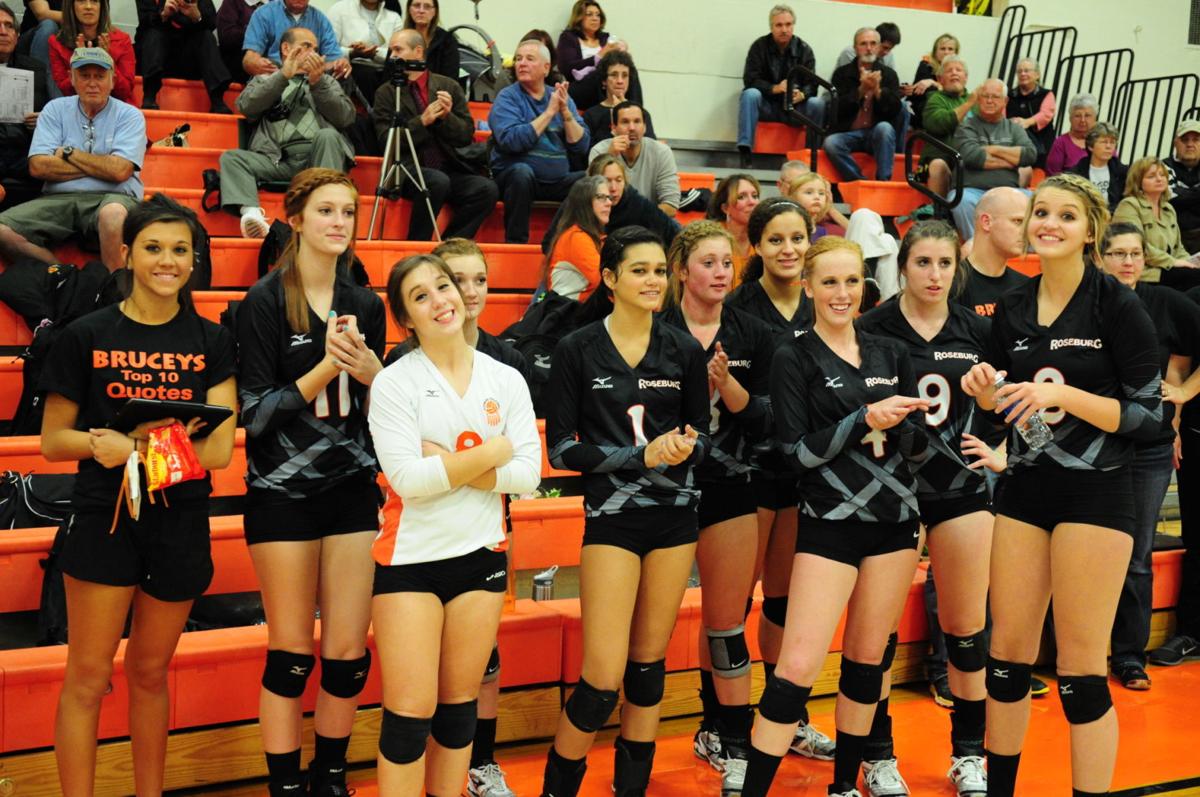 Members of the 2012 Roseburg High School volleyball team show their enthusiasm from the bench during a match at Robertson Memorial Gym. The Indians went on to advance to the Class 6A championship match, losing to Jesuit in five sets.

Roseburg High volleyball coach Bruce Myers breaks a team huddle before a match during his final season of coaching at RHS in 2012.

Raluca Gosman (7) celebrates with her Roseburg High teammates after the Indians’ semifinal victory over Central Catholic at the 2012 Class 6A state volleyball tournament in Hillsboro.

Members of the 2012 Roseburg High School volleyball team show their enthusiasm from the bench during a match at Robertson Memorial Gym. The Indians went on to advance to the Class 6A championship match, losing to Jesuit in five sets.

Well, the 2012 squad has to rank at the top based on its runner-up finish in the Class 6A state tournament.

“It was heartbreaking,” Cali (Tovey) Brown, a second-team all-state libero on the 2012 team, said of the loss to Jesuit. “For me, it’s still a touchy subject. But I was proud of what we accomplished. That was absolutely the best team I’ve played on.”

“It was awesome. That was the best team,” added Vanessa Bentley, the setter on that squad who was honored as the Class 6A Player of the Year. “If you ask me, that was the best year of everyone’s lives. There were so many memories, you can’t begin to talk about them.”

Myers, Roseburg’s winningest volleyball coach with a record of 369-125 according to OSAA records, was selected the 6A Coach of the Year.

“I felt bad for the girls (after the Jesuit match),” said Myers, who now lives in Salem and is currently the head coach at 5A Central High in Independence. “They worked so hard and did everything necessary to be state champions.

“Those were fun kids to be around. They loved playing volleyball and were highly-competitive kids. It was a deep team, we went eight-nine strong. We had multiple options and could attack you from sideline to sideline.”

“That was such a special team. It brought me life-long memories,” said Bruns, who’s a RN at Mercy Medical Center. “We weren’t tall, but super athletic. We had great teamwork and bonding, and were able to bring out the best in each other. To reach the state championship match was an awesome feeling.”

The Tribe entered the 2012 season with high expectations following a solid 2011 campaign. Roseburg won the conference crown, placed sixth at the state tournament and finished 26-6 overall without a senior on the roster.

“From the time we were 12 and playing club volleyball, we made a goal to play together in the state finals,” Brown said. “That was our motivation throughout middle school. We wanted to beat the Portland girls. We didn’t win at the end, but did beat Central Catholic.”

“We grew up from (club),” Bentley said. “Our senior year we were definitely ready to go and make it far.”

The Indians played a challenging nonconference schedule in 2012. Roseburg went unbeaten in Southern Oregon Hybrid play, going 8-0. Bentley was the SOH Player of the Year, while Bruns, Griggs, Gianotti and Tovey were first-team selections. Cash, Misfeldt and Haskett made the second team.

The Tribe opened the state tournament against Barlow, winning the quarterfinal match 25-23, 25-20, 25-22. Next up were Rick Lorenz’s Rams of Central Catholic, a longtime Oregon prep volleyball powerhouse.

Gosman turned in perhaps the performance of her life, getting 20 kills. Bentley had 48 assists.

“That was one of the best feelings I’ve ever had,” Bruns said. “It made us feel like all that hard work had paid off.”

It was down to Jesuit and Roseburg. The Crusaders advanced to the championship match with a sweep of Clackamas. The Indians were looking to become the second team from the southern side of the state to win a big-school state volleyball crown, following the 2005 Ashland Grizzlies.

Roseburg was in excellent position after winning the second and third sets, but couldn’t finish the deal against Jesuit (28-5), which got 20 kills from 6-foot-5 sophomore Ariana Wiltjer.

Gosman led the Tribe with 15 kills and Bruns chipped in 10. Bentley had 37 assists and 12 digs.

“Everyone was pretty nervous, but after the first couple of plays the nerves went away,” Bentley said. “We didn’t win, but it was really fun.”

“I remember fighting to the very end,” Brown said. “There were some questionable calls (in the fifth set) that hurt us.”’

Bruns said, “That was such an emotional match. I’ll never forget being in that match.”

Bentley, Bruns and Gosman were first-team all-tournament picks and Griggs made the second team.

Myers and his wife Nancy moved to Salem after that season to be closer to their kids and grandchildren. Myers didn’t stop coaching, though. He worked with the Sprague freshman team one year and was head coach at McNary and West Salem for one year each before taking over the Central program in 2019.

“I wonder what I did in life to be so lucky to get (the Roseburg) job,” Myers said. “(Former Roseburg AD) Bill Welch paid me a huge compliment. After a match at South Medford, he shook my hand and told me I was a pretty good hire. I was the last coach he hired (before retiring).

“I got to coach so many great kids. So many of them are so successful.”

“Bruce was hands down the best coach I’ve played for,” said Bentley, who’s currently a paralegal at a law firm in Houston, Texas, and is preparing for law school. “There’s nobody else like him. He was tough, but made it fun.”

Most of the players from the 2012 team went on to play a sport or two in college.

Haskett, Brown, Bruns, Cash and Misfeldt all competed in small college or community college volleyball. Brown played two years of volleyball at Snow College in Ephraim, Utah, then transferred to Utah State University in Logan and swam two seasons for the D-I Aggies.

Brown is now the head volleyball coach at Hidden Valley High in Murphy.

Myers guided nine Roseburg teams to the state tournament and two of them finished fourth — the 2000 team, led by Megan Morley, and the 2003 club, which included Emily Waldron, Katie Fuller and Lindsy Bartholomew.

Myers picked Joslyn Gallop as the best player he coached at RHS. Gallop, who led the Indians to a fifth-place state tournament finish in 1996, went on to star at D-1 San Jose State and is currently the head coach at Emery-Riddle in Daytona Beach, Florida.

The Indians had some very good teams under Nora Eaton, winning Southern Oregon Conference championships in 1983 and 1986. Tami (Good) Hellwege was a member of the ’83 team and played at Oregon State University.