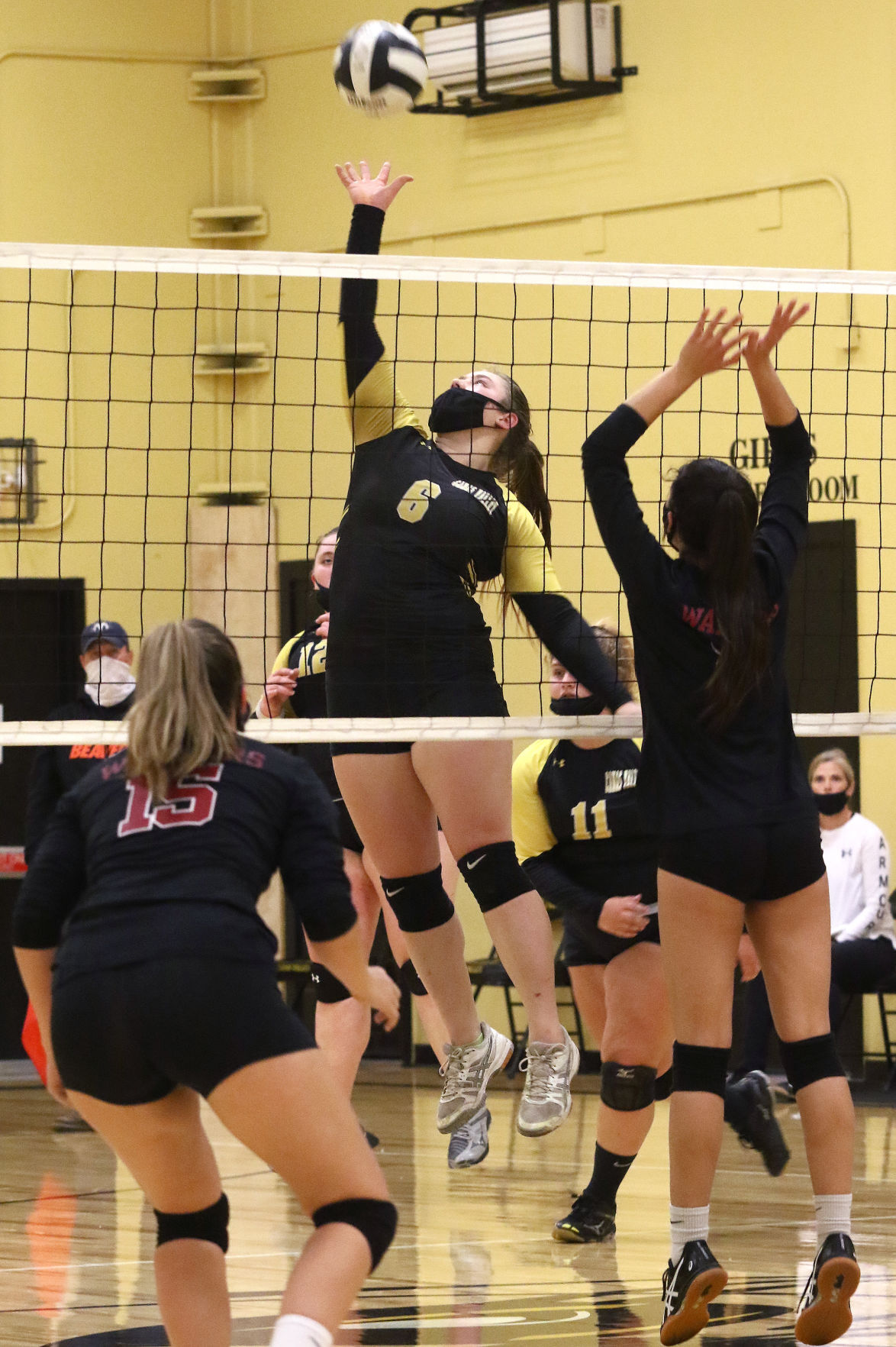 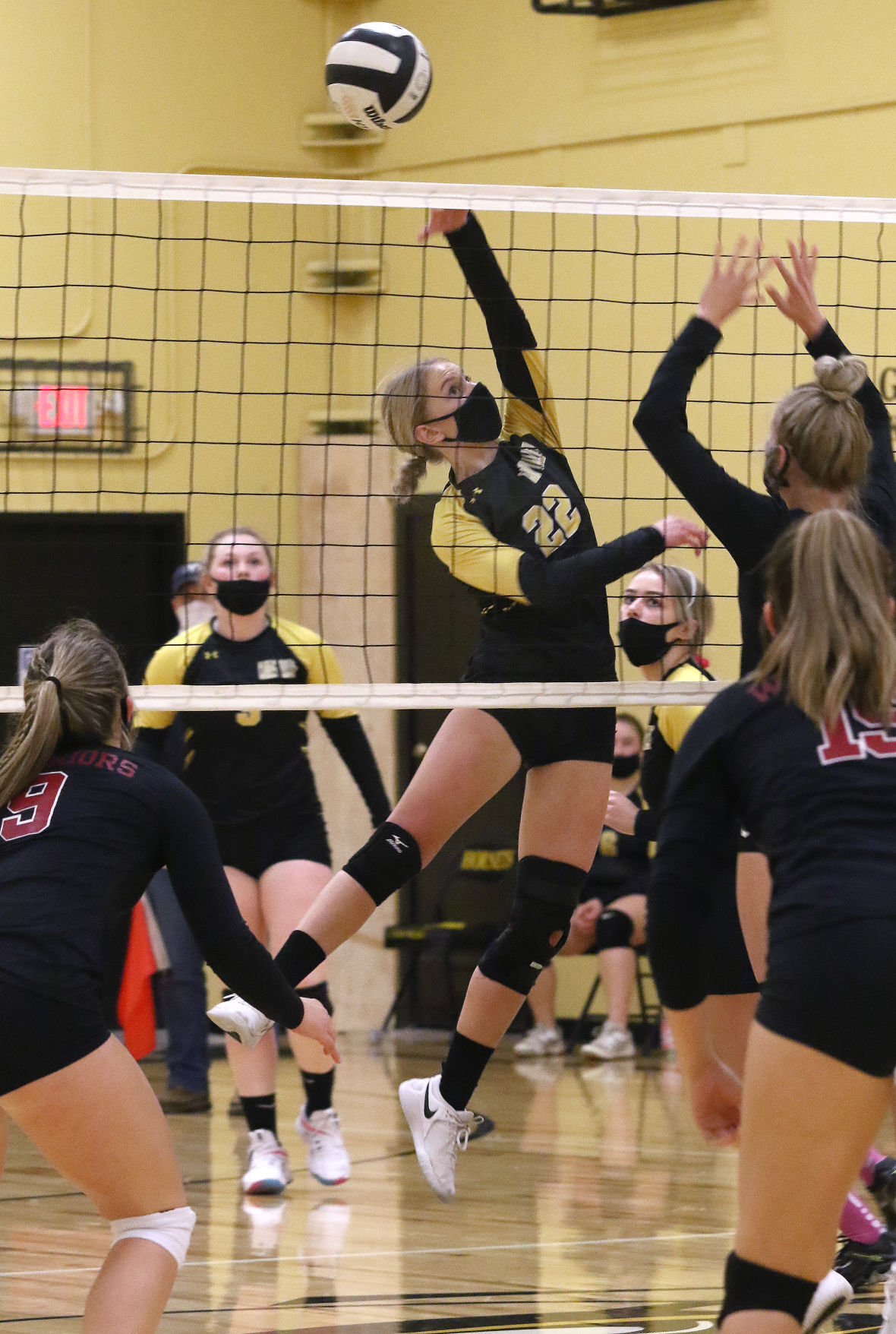 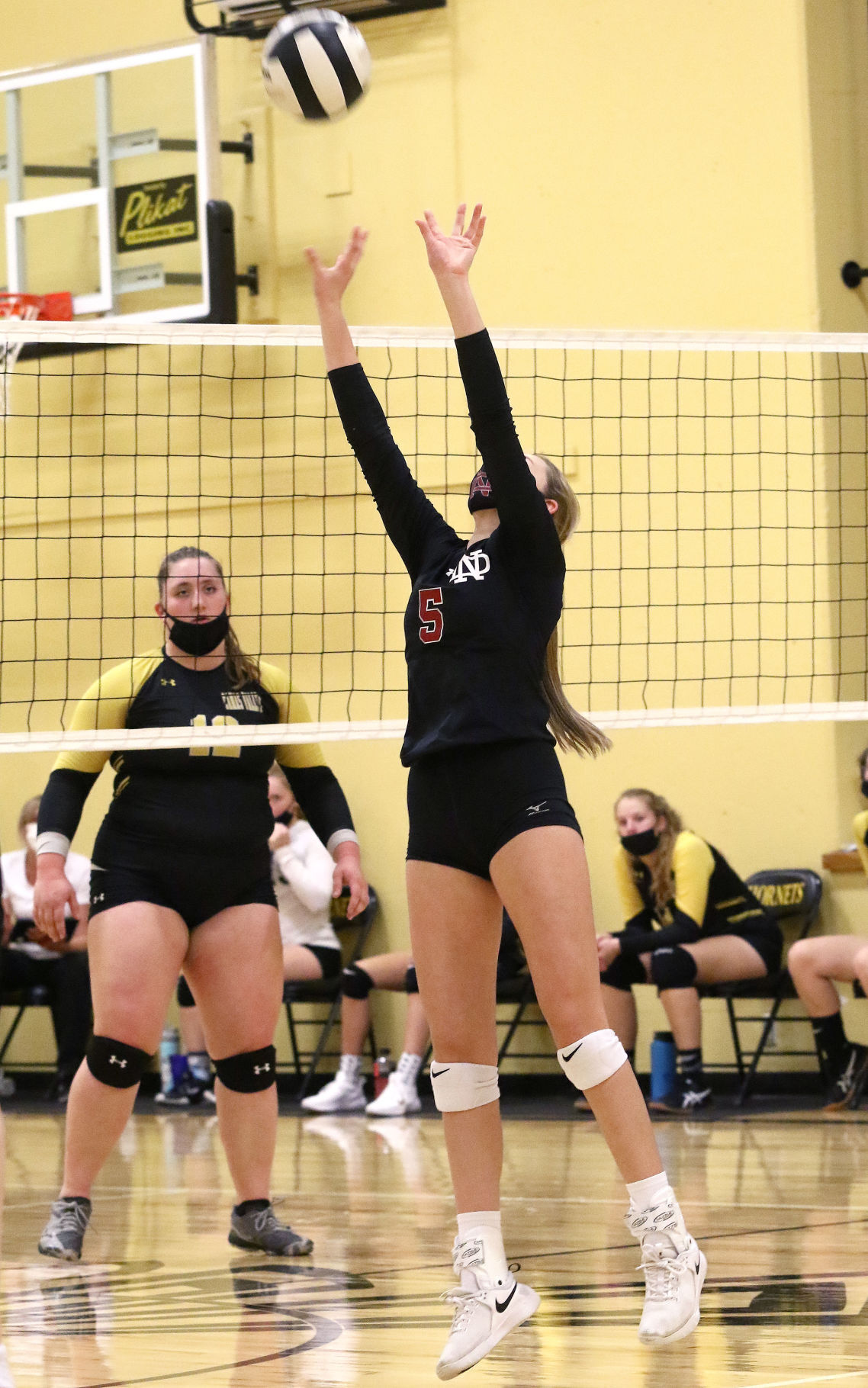 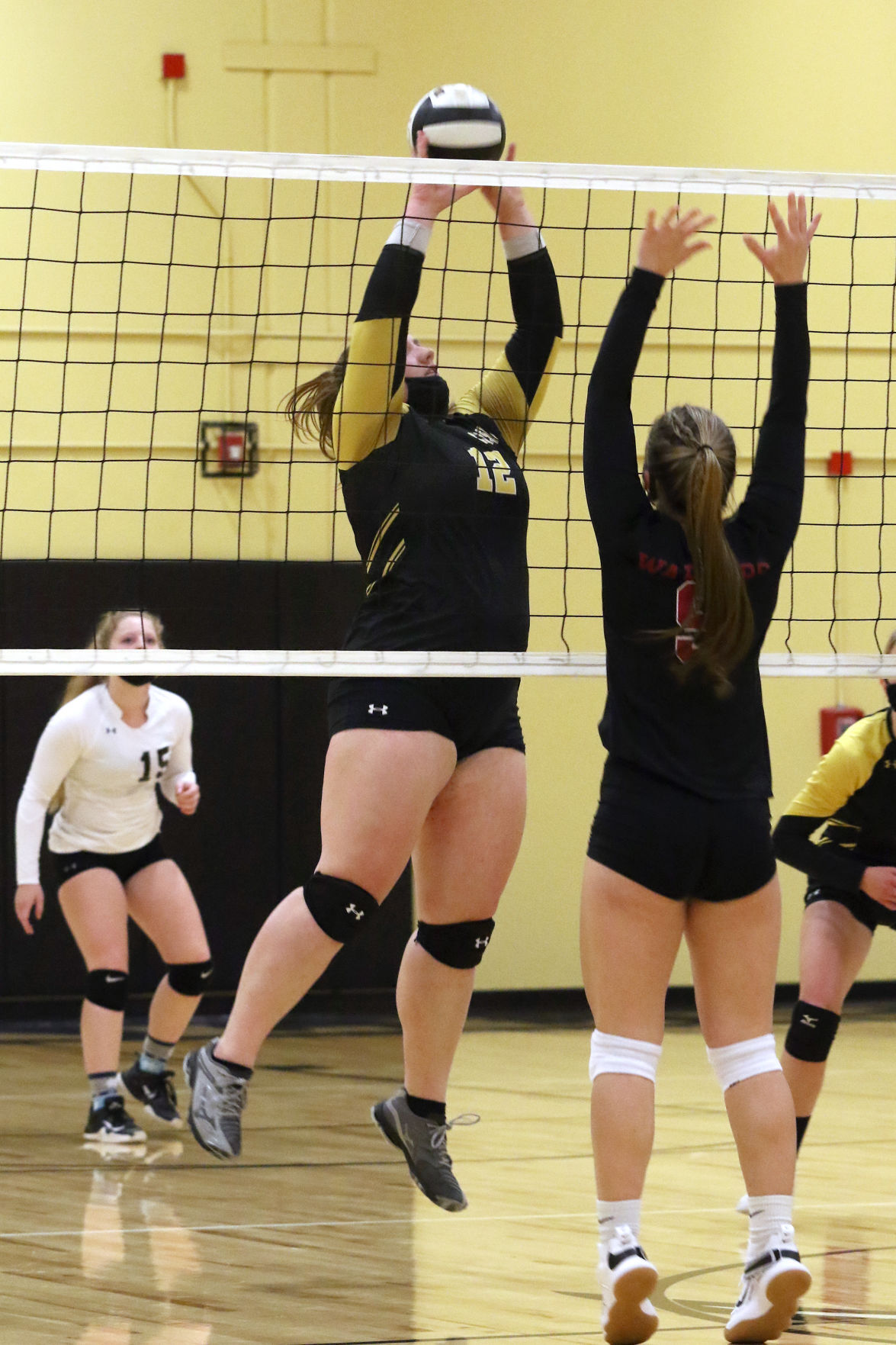 Their was no lack of enthusiasm in the Hornets’ gym, with North Douglas and Camas Valley battling in a five-set match. All the players were in their game uniforms, fans from both sides cheered on their teams and Oregon School Activities Association officials worked the contest.

This match doesn’t count in the records, though. As you know, this hasn’t been a normal year.

It was just a scrimmage as the coronavirus pandemic has bumped the 2020 Oregon high school fall sports seasons to the spring of ’21.

There’s no guarantee there will be a prep volleyball season in March due to the pandemic, but everyone is keeping their fingers crossed.

Many of Douglas County’s Class 1A teams have made good use of their practice opportunities this fall and scrimmages in place of the season that didn’t happen.

“It’s hard (not having an official fall season), but I’m glad we get to play right now,” said North Douglas junior Samantha MacDowell, who was the Skyline Libero of the Year in 2019. “Hopefully later on we can play some more.”

“I’m definitely a little annoyed, but it’s out of my control so I’m taking what I can get and putting 100 percent into every practice and scrimmage,” Camas Valley senior Hailey Holmgren said.

“It’s definitely been stressful and disappointing,” said Wolfe, who received first-team all-league honors last year. “I lost my sophomore year because of my knee and lost most of my junior year because of the knee. This was the year I was going to come back and kind of redeem myself.

“But I’m super thankful for what I do have. We’re a small school and we’re still able to play. Even if I don’t have an official school season, I have this.”

“It’s been hard,” admitted Joy DeRoss, a senior for the Hornets who made second-team all-league in 2019. “Some days it’s good, other days you just want to break down and cry because you work so hard.

“(COVID-19) can take track season (last spring), but I’m going to work my butt off my senior year. I’m working hard to get where I am, and it’s not just me, it’s everybody on our team. If we get a season, I’m hoping to see us go to state.”

The Hornets won the South Division of the Skyline last season and finished 17-6 overall. Their season came to an end with a loss to Elkton in the district tournament.

Sophomore Brooklyn Williams is among the returning players for North Douglas, which finished 22-10 overall and lost to Rogue Valley Adventist in the second round of the state playoffs last year. Williams was a first-team all-league selection in her first season of high school volleyball.

“It’s been really rough,” Williams said. “It hasn’t been normal at all ... volleyball’s my favorite sport, so it’s been hard not getting to play like how we usually would. But I’m glad we’re just doing something right now.”

Emily Reed is in her second year as head coach of the Warriors.

“The girls feel very fortunate they get to be out here, so we’re taking every opportunity that we can just to get better,” Reed said. “A lot of these girls spent a lot of time over the summer playing beach volleyball or coming in and doing workouts. We’re just taking this opportunity to prepare for the season and to get better for the future.”

The Days Creek Wolves are the defending Skyline regular season and tournament champions. Led by graduated seniors Moriah Michaels and Joleen Crume, Days Creek placed third in the 1A state tournament, capping off a 29-3 season.

Seniors Ashtyn Slater and Megan Kruzic, both first-team all-league picks, are the top returners for the Wolves.

“It’s been a little strange (this fall), to say the least,” Days Creek second-year coach Gloria Kruzic said. “We haven’t been going at it full bore (with volleyball) at all. Some of the kids are doing other sport season workouts as well.”

The Wolves pulled out a five-set match with Camas Valley Tuesday.

“It feels great (getting to scrimmage),” Gloria Kruzic said. “It was great to be on the court with Camas. They were really fun to play and I thought they looked great. It felt like normal life a little bit.”

The coaches and players have been wearing face coverings, and following social distancing guidelines the best they could during the scrimmages.

“Several of our girls took part-time jobs and some practices we didn’t have a full team and that created challenges, but we’re grateful we can get anything right now,” C.V. third-year coach Tresta Payne said. “It’s been important to give them hope and something to do, for sure.”

The Skyline League has been a strong volleyball league over the years and getting to play someone beside themselves benefits all the teams.

“It’s important to scrimmage,” DeRoss said. “It helps you get an idea what your team looks like, but it also gives you a chance to work out the kinks — where you’re weak and what your strengths are. If we didn’t scrimmage, I don’t think we’d be as good as we are today.”

“It’s good to get these moments to figure out what our chemistry and dynamic is going to be,” Wolfe said. “We try and keep (these scrimmages) as natural and normal as possible. These are teams we’re going to play in March. We want to make the intensity, mentality and energy the same as any other match ... it feels official and we want to make it that way.”

Even if it wasn’t an official win, Williams was proud of her team’s comeback against an improved club.

“This is good for us to get out and get some reps in and work together as a team,” she said. “It’s really good for bonding. We came out and it was rough (at the start), we let them have way too long of runs. But we fought and gave it our all.”

“We played pretty hard tonight,” MacDowell said. “We have some things to work on, but we’re really working as a team.”