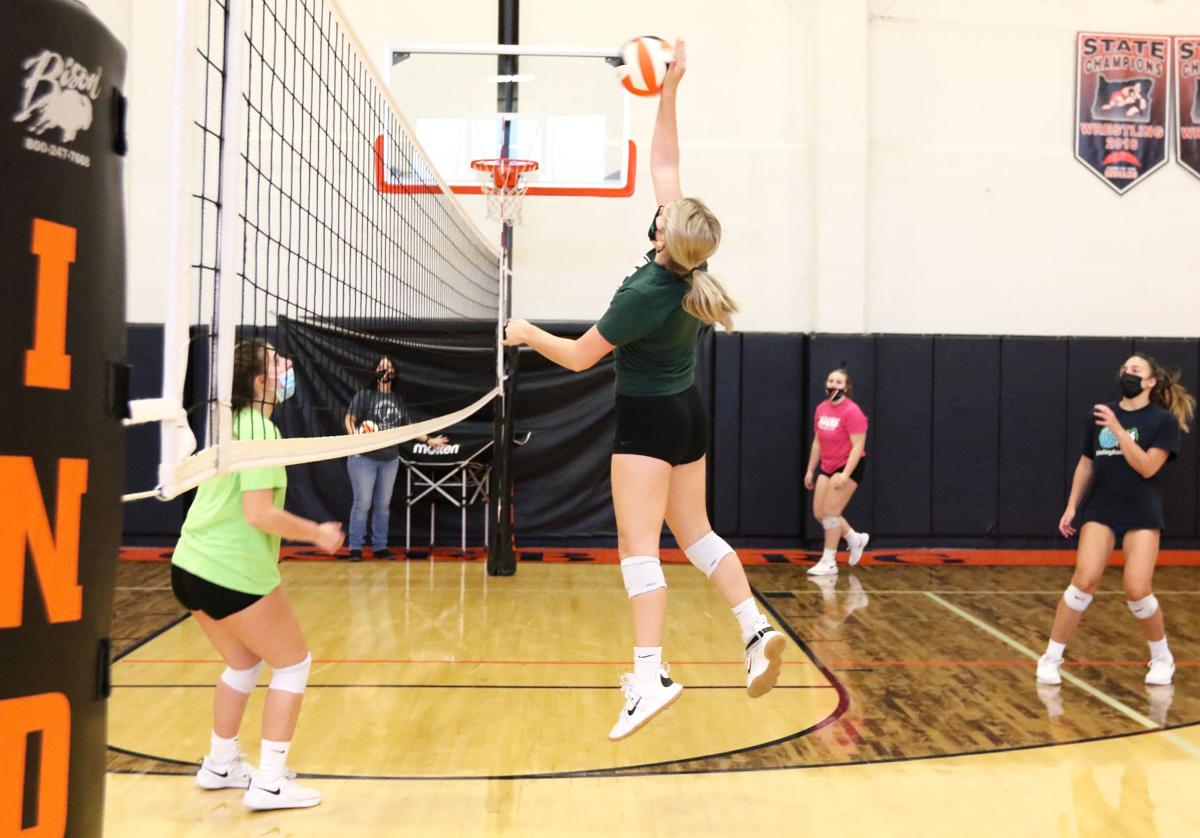 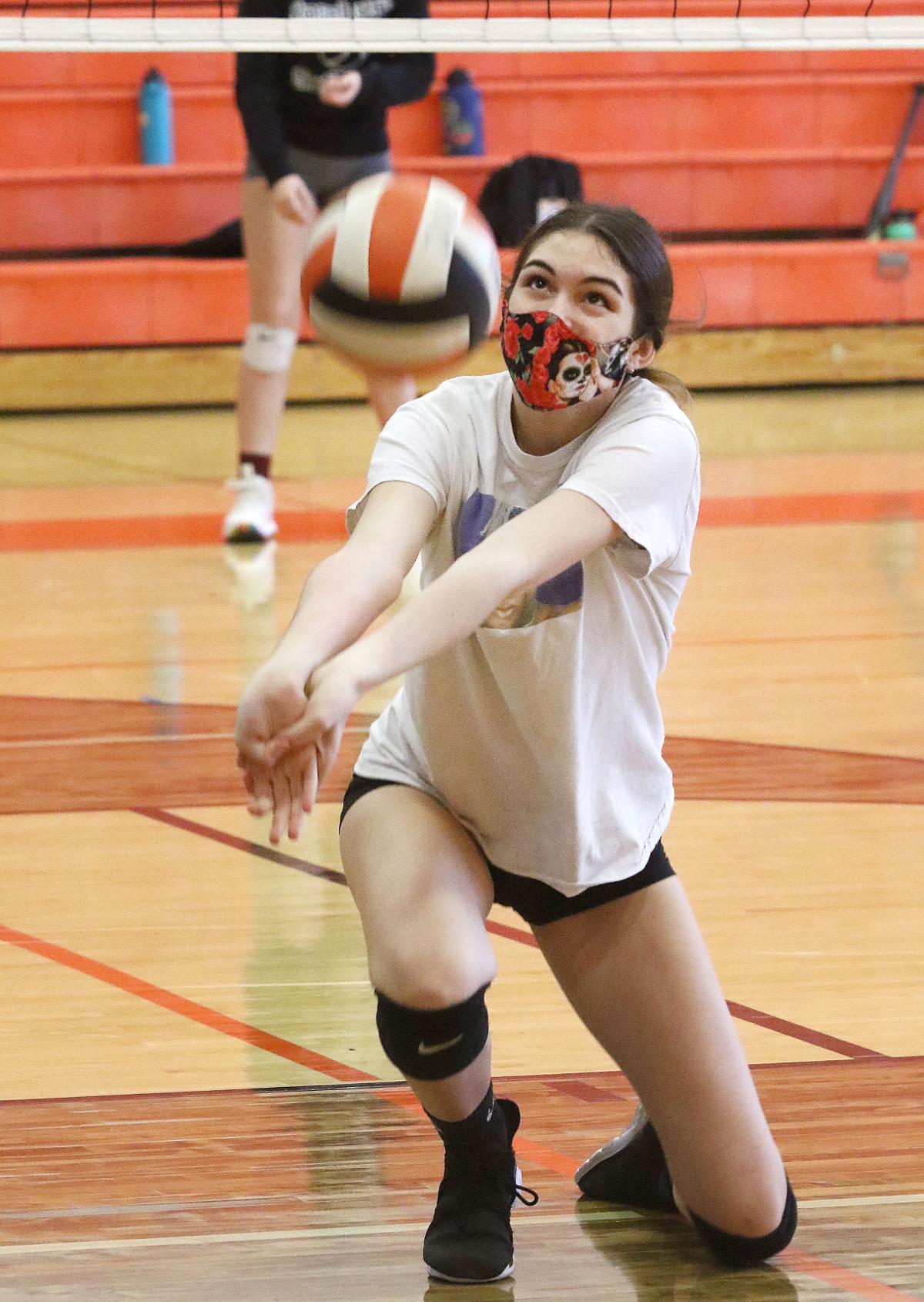 Roseburg freshman Aria Smith warms up with teammates prior to a volleyball workout session. 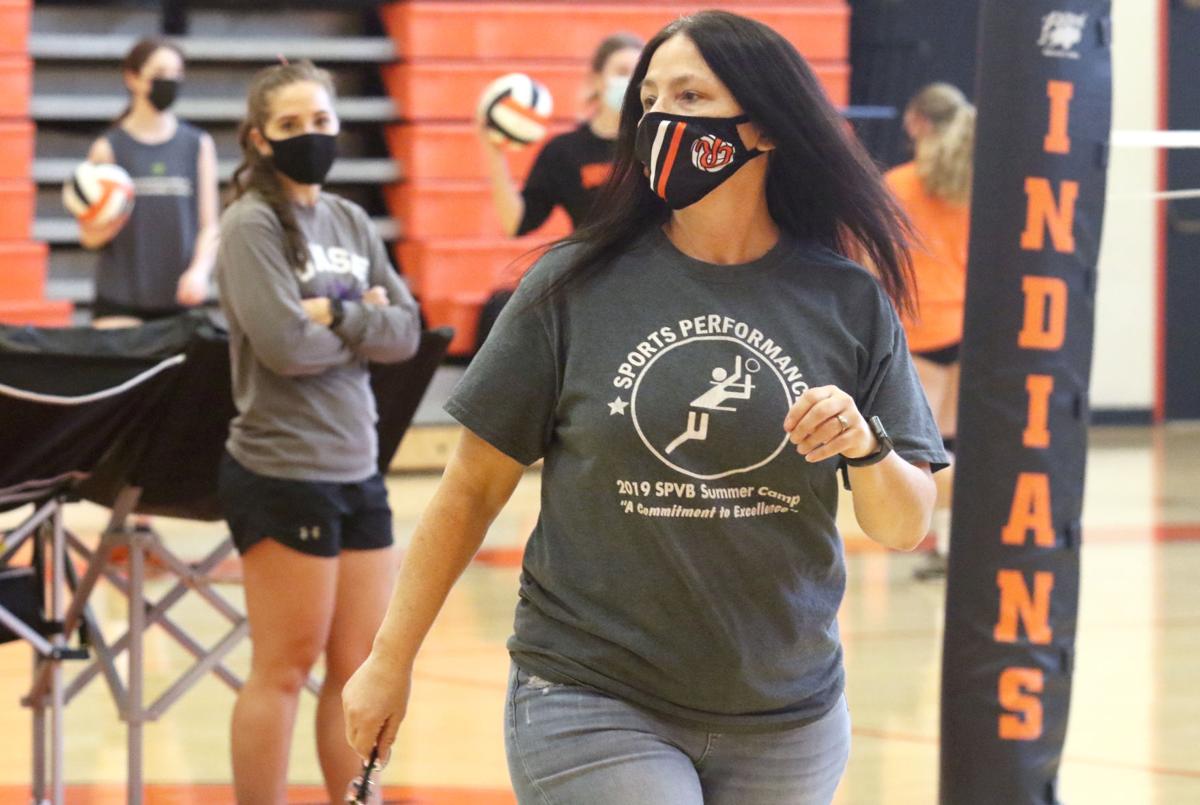 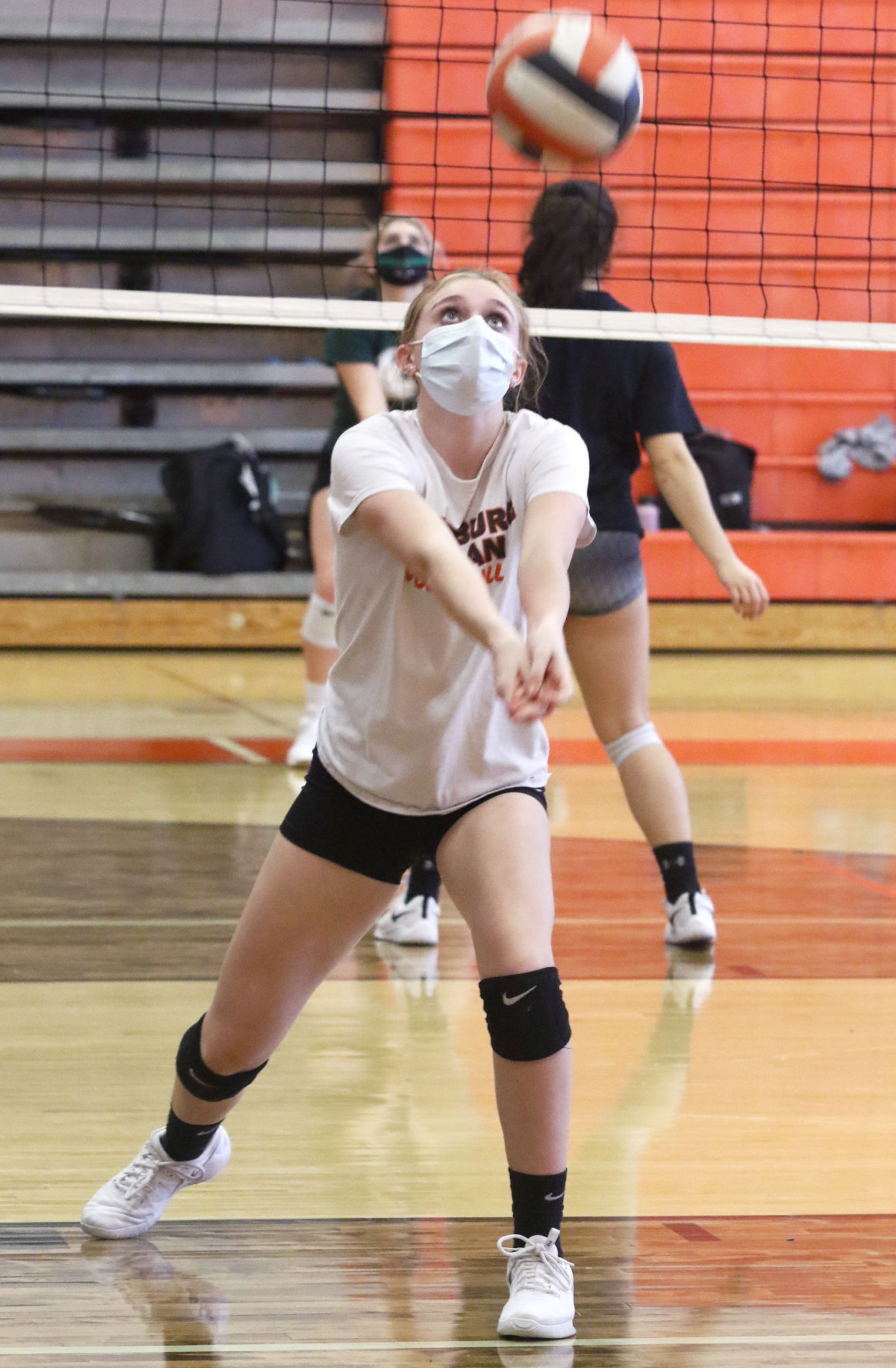 Roseburg freshman Mikyla Cunningham warms up with teammates prior to a volleyball workout at RHS on Wednesday. 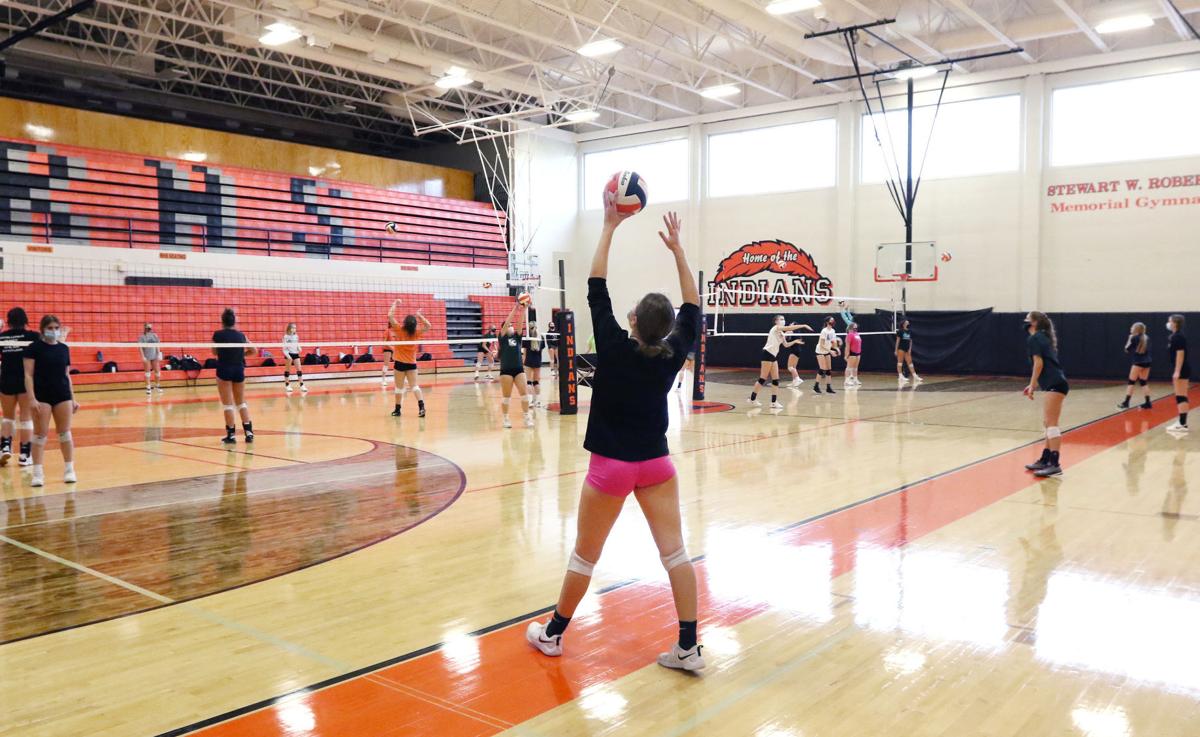 Roseburg High School volleyball players warm up before a workout at RHS on Wednesday. 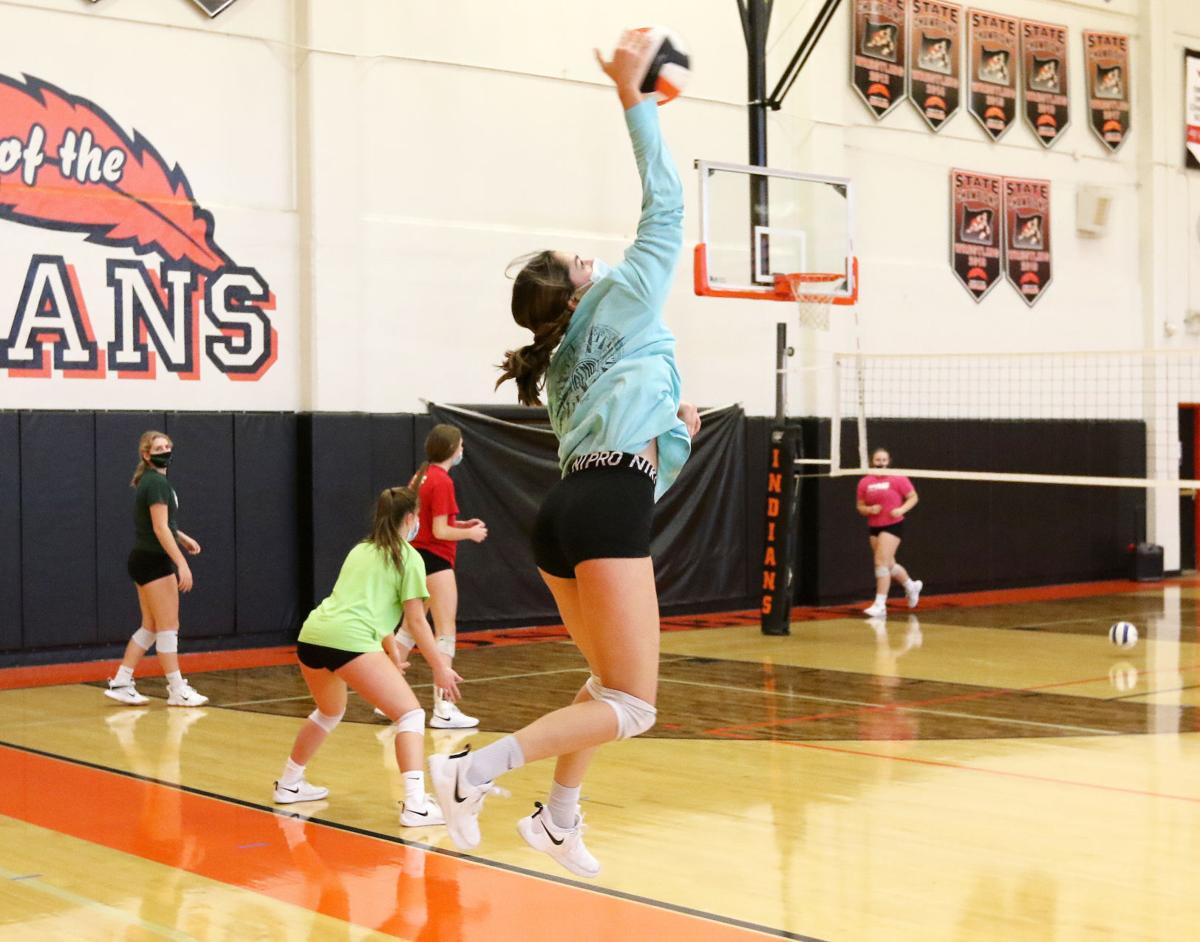 Roseburg sophomore Grace Luttrell warms up with teammates prior to a workout session at RHS on Wednesday. 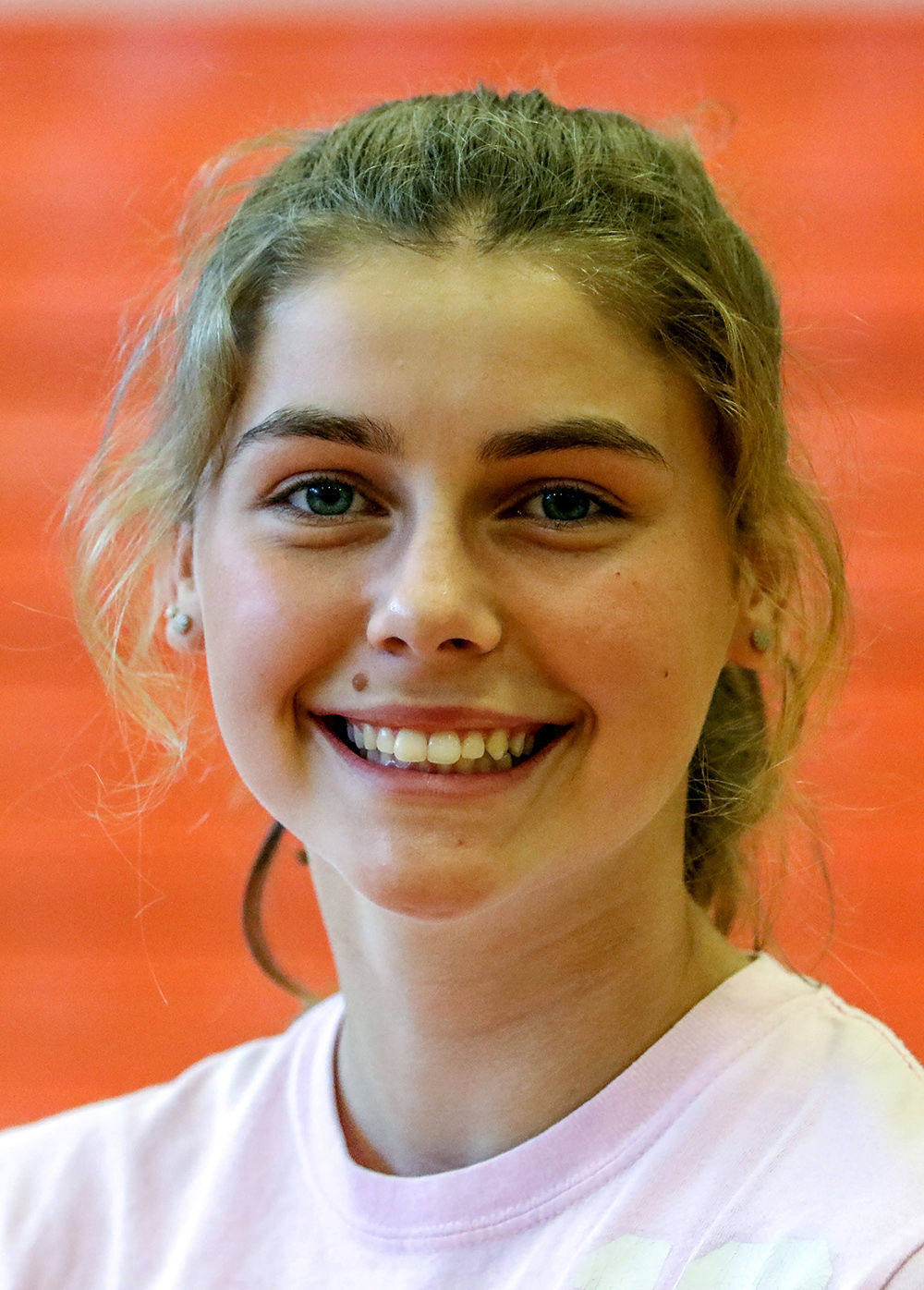 Roseburg freshman Aria Smith warms up with teammates prior to a volleyball workout session.

Roseburg freshman Mikyla Cunningham warms up with teammates prior to a volleyball workout at RHS on Wednesday.

Roseburg High School volleyball players warm up before a workout at RHS on Wednesday.

Roseburg sophomore Grace Luttrell warms up with teammates prior to a workout session at RHS on Wednesday.

An enthusiastic group of Roseburg High School volleyball players were working on their games during a workout Wednesday afternoon at Robertson Memorial Gym.

The coronavirus pandemic cost the Indians their 2020 fall season, but they’re hoping to get a shorter one in this winter/spring.

The Oregon School Activities Association has tentatively scheduled the first day of practice for volleyball, soccer and cross country for Feb. 22. Football will start Feb. 8.

Games and matches can begin on March 1, assuming Gov. Kate Brown and the Oregon Health Authority give the go-ahead.

“All of the seniors have been playing together in club since sixth grade,” said Madison Carter, one of the returning seniors for Roseburg. “It’s been really fun to grow up and play the sport together. We’re just hoping to get one last season together before we head off to college.”

“I honestly don’t know if we’ll have a season, but hope we will,” added Sierra Paroz, another returning senior. “I’ve been waiting for a long time. I’ve been looking forward to my senior year since I was a freshman, and I just hope we get to play.”

“This group is very close-knit,” said Vicki Crowl, in her second year as Roseburg’s head coach. “We are so excited. We have a huge senior class, and they want to finish out strong. We won’t be playing in a regular conference, but they’re excited to get on the court and play. The girls want to share the joy of being on the court with their friends.”

Not getting to play volleyball in September and October — and possibly November — was a punch to the gut for the RHS players and coaches.

“It definitely did suck,” Paroz said. “Volleyball is my passion, I just really enjoyed playing with all of my friends. I was hoping we’d at least have a season, (and when we didn’t) I got upset about it.”

“With it being my senior year, I’d always looked up to the senior girls on their senior night and looked forward to that,” Carter said. “Not being able to have that, I was super disappointed. But I’m super happy to be in the gym right now. Hopefully with us going back to school in the next two weeks we can work towards having a season.”

Not coaching during the fall left a big void for Crowl, a former head coach at South Umpqua and Douglas.

“I watched a lot of volleyball videos, did stuff around my house and was a little bit depressed like some of the girls,” Crowl said. “It’s a big part of your life, and all of a sudden it’s gone. You have to adjust and figure out where to go.”

The Indians have four seniors who have already signed to play volleyball at Umpqua Community College next year — Carter, Paroz, Alisha Sabins and Eliana Bruton.

“I just hope we get to travel and play some matches,” Carter said. “That’s what has been getting me through the school year. I decided not to graduate early so I’d get a chance to play volleyball. This is what’s keeping me going.”

Roseburg lost four seniors to graduation, including first-team all-conference outside hitter Chay Swenson. The Indians finished fourth in the Southwest Conference with a 4-6 record and went 10-14 overall, losing to Mountainside of Beaverton in the first round of the Class 6A playoffs.

“It’s a great group of girls (this year),” Carter said. “We understand each other well on the court.”

“I look around and see the girls, and feel like we’ll definitely do well,” Paroz said. “We have some height and girls who can hit the ball. We have girls who can set and our defense is pretty strong.”

Returning to school for in-person learning on Jan. 25 will be a huge lift, Crowl said.

“Having your friends with you almost all day is the best medicine anybody can have,” she said.

“I’m ready to come back to school,” Paroz said. “I like to be in-person learning things. It’s been a long time.”