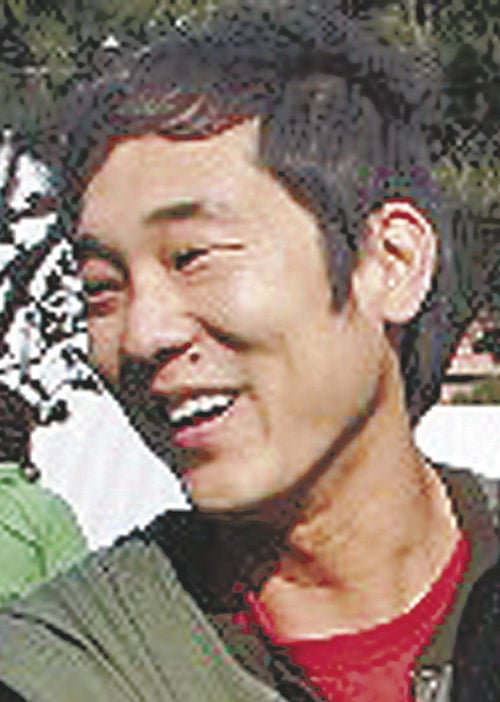 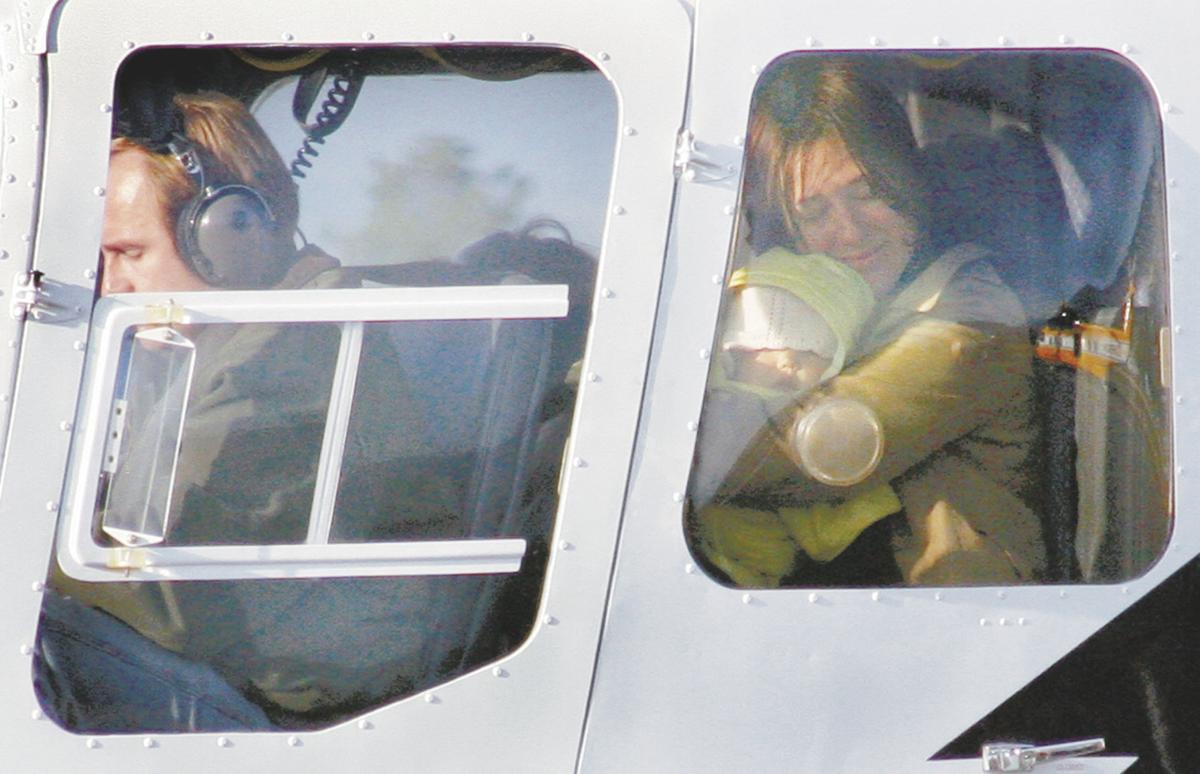 A helicopter carrying Kati Kim and her two daughters lands at the Grants Pass Airport in Merlin. 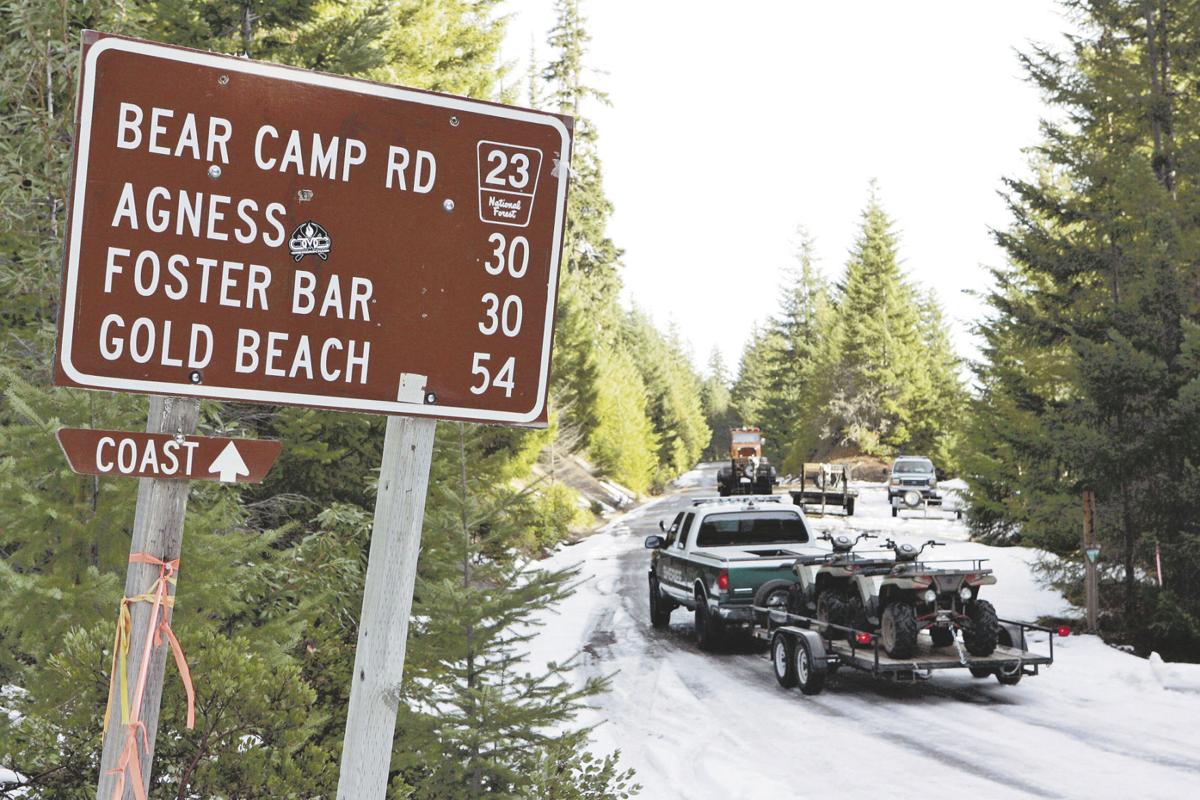 Photo by DON RYAN/AP Search crews with all terrain vehicles head down Bear Camp Road in the Siskyou National Forest near Galice, Tuesday, Dec. 5, 2006, This is the junction where the Kims left Bear Camp Road and turned down a side road for 22 miles, becoming stranded. 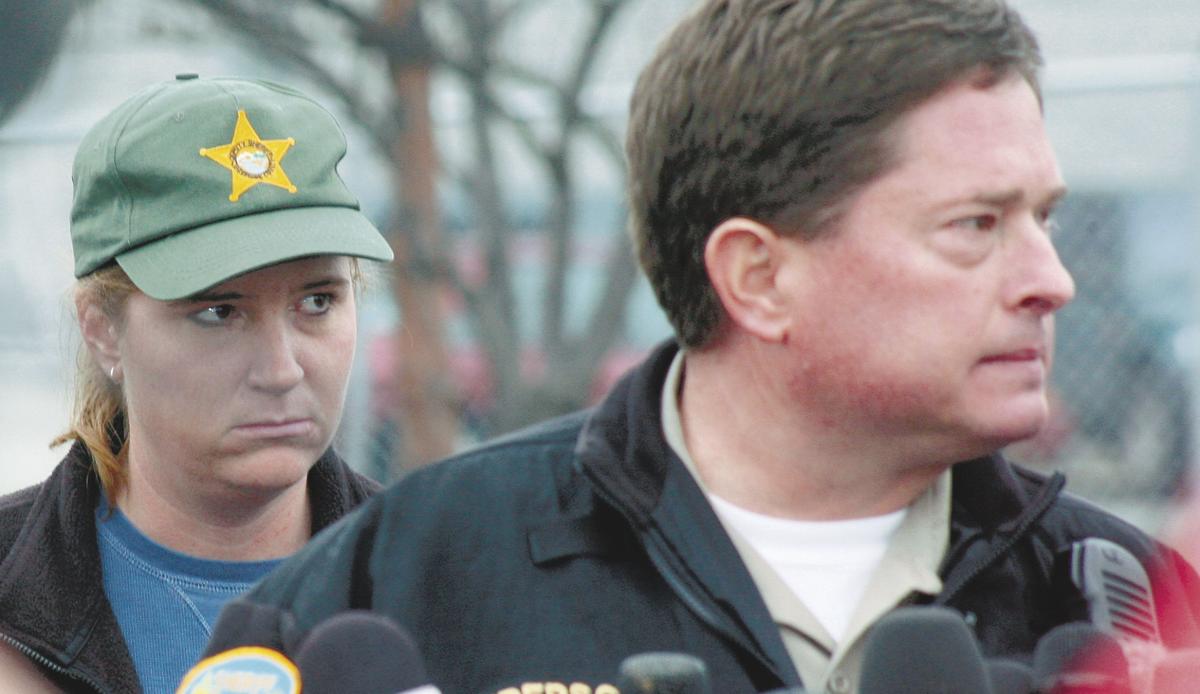 The news of James Kim’s death hit hard for Josephine County Undersheriff Brian Anderson, and Search and Rescue Coordinator Sara Rubrecht. This photo was taken at a press briefing after the discovery of James Kim’s body.

A helicopter carrying Kati Kim and her two daughters lands at the Grants Pass Airport in Merlin.

Photo by DON RYAN/AP Search crews with all terrain vehicles head down Bear Camp Road in the Siskyou National Forest near Galice, Tuesday, Dec. 5, 2006, This is the junction where the Kims left Bear Camp Road and turned down a side road for 22 miles, becoming stranded.

The news of James Kim’s death hit hard for Josephine County Undersheriff Brian Anderson, and Search and Rescue Coordinator Sara Rubrecht. This photo was taken at a press briefing after the discovery of James Kim’s body.

They’d just eaten at Denny’s. It was well after dark, already around 9 p.m.

They family had spent Thanksgiving vacation time in Seattle and Portland, and were heading home. But first they planned a short stay at Tu Tu’ Tun Lodge, a cozy inn on the Rogue River near Gold Beach.

They never made it to Gold Beach.

Over the next few hours, tragedy began to unfold as the Kims found themselves stranded for more than a week in a foreign environment — mountains, remote canyons and logging roads that led to nowhere.

Their ordeal and ultimately James Kim’s death from exposure gripped the nation for more than a week, and questions linger to this day.

A decade later, former Josephine County Search and Rescue Coordinator Sara Rubrecht talked about the positive changes that ensued after the Kim tragedy, including better coordination between Search and Rescue agencies.

She also re-uttered the questions many asked a decade ago, most notably, “Why didn’t (the Kims) just turn around and stay in Roseburg or Grants Pass?”

“They wanted to get there. We’ve all had that,” said Rubrecht, now Jackson County Emergency Services manager. “It was dark. They couldn’t see the vast forest. You can’t see that you’re in the middle of nowhere. It’s just around the corner, just around the bend.

“Who knew they were driving farther and farther into nowhere?”

It stemmed from a simple error: After leaving Roseburg, the Kims missed the Highway 42 exit near Winston.

An hour farther down the freeway, having encountered no other obvious exits to the coast, they stopped in Merlin for gas. There, they consulted a printed map and made an ill-advised choice to follow a squiggly if not seemingly direct line west over the Coast Mountain Range.

That was Bear Camp Road, oft-driven in summer but potentially treacherous in winter. More than a decade earlier, the same road had claimed the life of an RV salesman from Montana named Dewitt Finley, who starved to death after getting stuck in 1994.

As if Bear Camp wasn’t bad enough, the Kims took another wrong turn and drove 22 miles down a logging road, before tiring and becoming stranded.

Rubrecht said a common misconception about the Kim search was their alleged use of GPS navigation. They had three cellphones, but primitive GPS, Rubrecht said. Also, technically they were never stuck in snow.

“They could have ended up where they were in August,” she said.

Snow did play a role, however. When they hit the fork in the road at milepost 12, where Bear Camp looks more like the side route, they started seeing snowfall — which may have contributed to their decision to take the ill-fated route, BLM Road 34-8-36.

Either way, the family — James Kim, 35, a technology journalist; Kati, 30, a boutique owner; Penelope, 4; and 7-month-old Sabine — got lost the first night and decided to hunker down.

Trouble was, no one knew they were lost, or even overdue. When word got out three days later, the initial search area was huge — much of southwest Oregon, recalled Phil Turnbull, now chief for Rural/Metro Fire Department.

But it slowly narrowed, as details trickled out, including a cellphone ping discovered by Edge Wireless engineers from a tower near Glendale. They plotted a wedge shape to the west that covered the Bear Camp Road area. But it also covered areas north of the Rogue River, and a week had already passed since the Kims had become stranded.

Turnbull was a Search and Rescue volunteer, a planning section chief in the Kim search. He’d seen plenty of searches, but this one was different, with officials from around the state and national media attention.

“All of a sudden there was a lot of brass in that room,” Turnbull said this week. “We had CNN satellite rigs parked outside the command post. This was a little bit of a circus.”

James Kim’s well-connected father, Spencer, also got involved. He hired Carson Helicopters based in Merlin to join the search.

But it was private pilot John Rachor of Central Point who finally connected the dots.

Rachor, who owned 11 Burger Kings in Southern Oregon before becoming a Jackson County commissioner in 2008, had flown over the search area many times on the way to his cabin near Agness.

He read about the Kims in the newspaper and got in his helicopter at about the same time that hordes of searchers were focusing on the Bear Camp Road area.

He knew well the long, winding road that descended toward Black Bar Lodge and beyond, into the Rogue River’s wild canyon. He knew there were actually several roads, and played a hunch.

He got within a mile of the Kims’ car the first day, then on the second day went back.

“I was following bear prints, which are round, and I saw these long, thin ones,” Rachor remembered. “I could hover within 10 feet. I could see treads. I knew they were fresh.”

He lost those prints, evidently made by James Kim, but at some point he looked down to see a woman waving an umbrella, jumping up and down. The children were in the car nearby.

Rachor couldn’t land, but soon a Croman S-61 dropped survival gear, and another pilot, Scott Dunn, was able to land within 200 yards of the Kims’ Saab.

Within a half hour, Kati and the girls landed at the Grants Pass Airport in Merlin. By then they had been stranded for nine days.

The distance the Kims drove on the logging roads surprised many. They ended up within a mile of the Rogue River, in the vicinity of Dulog Riffle and Horseshoe Bend, four or five miles downstream of Black Bar Lodge.

But what of James Kim?

Two days earlier he had reluctantly left his family hoping to get help. Authorities later determined he slogged uphill for several miles, then, possibly hoping to follow the Rogue River back toward Galice, decided to walk into Big Windy Creek Canyon.

He’d eaten little for more than a week. Although he had a warm jacket, he had no hat.

He ended up walking more than 20 miles. He had no chance once he descended into the canyon. He was probably dead before his family was rescued.

Joe Hyatt, now the fire marshal for Grants Pass Fire and Rescue, led the team that went into Big Windy, after Kim’s footprints were spotted turning off of a logging road.

Kim’s body was spotted in Big Windy Creek from a helicopter, and recovered by rescuers lowered by a line.

Hyatt was solid in what he called a “nerve-wracking” live interview on the Larry King Show later that day.

He described how team members got a strong feel for James Kim’s final hours by descending the harsh canyon, full of fallen trees, snow, and sheer canyon walls. Hyatt said the young father made the ultimate sacrifice.

“The only way we could proceed down that canyon was to be in the water in our dry suits,” Hyatt said. “I drew on every ounce of my experience taking my team into that canyon. We talked about what he must have gone through.”

In 2009 Kati Kim and the girls made a surprise, emotional appearance at Josephine County Search and Rescue’s Christmas banquet.

That was shortly after she rode with Rachor and Rubrecht to the site of their stranding, where three years earlier she breast-fed her girls to keep them alive, and where the family burned tires to stay warm after their car ran out of gas.

Rachor said he hasn’t spoken directly to Kati in some time, but corresponds via Facebook.

He began volunteering for Search and Rescue in Jackson County after the Kim incident, having flown his chopper in several searches. He left his mark with a bright red sign that still stands today next to Galice Access Road, on the way to Bear Camp.

It reads: “Danger, remote road system ahead, you might get stranded and die!!!”

The route to and along Bear Camp Road has other signs that have been erected since the incident, to help drivers avoid the fate of the Kim family.

Ten years after the loss of her husband, Kati Kim lives in the Portland area, where her daughters are in fifth grade and ninth grade. Her Facebook page shows them enjoying life. She did not respond to a request for an interview.

Rubrecht bore the brunt of some negative fallout from the search, including an unflattering story in The Oregonian newspaper that found shortcomings in the search effort.

A state report two months after the tragedy found gaps in communication but did not conclude that James Kim could have been saved with better performance.

Another sometime scapegoat, the Bureau of Land Management, said that a gate that normally blocks the side road the Kims took was inadvertently left open. But the BLM also has dozens of gates in the area that are opened and closed depending on the season.

Rubrecht and others have been busy trying to make improvements ever since the Kim tragedy. Perhaps the most important outcome is the creation of CORSAR, California Oregon Regional Search and Rescue. Eight local counties — Josephine, Jackson, Douglas, Curry, Coos and Klamath in Oregon, and Siskiyou and Del Norte in California — now work together and share resources on search operations. They also gather in the summer for training.

“Search and Rescue is a million times better than it was in 2006, because of relationships, sharing of resources and cross training,” Rubrecht said.

Despite the circumstances that led to the tragedy, James Kim’s heartbreaking effort to save his family while famished, freezing and exhausted, left an impression.

“It was amazing what he went through to get as far as he did,” said Hyatt. “It proved the love he had for his family.”