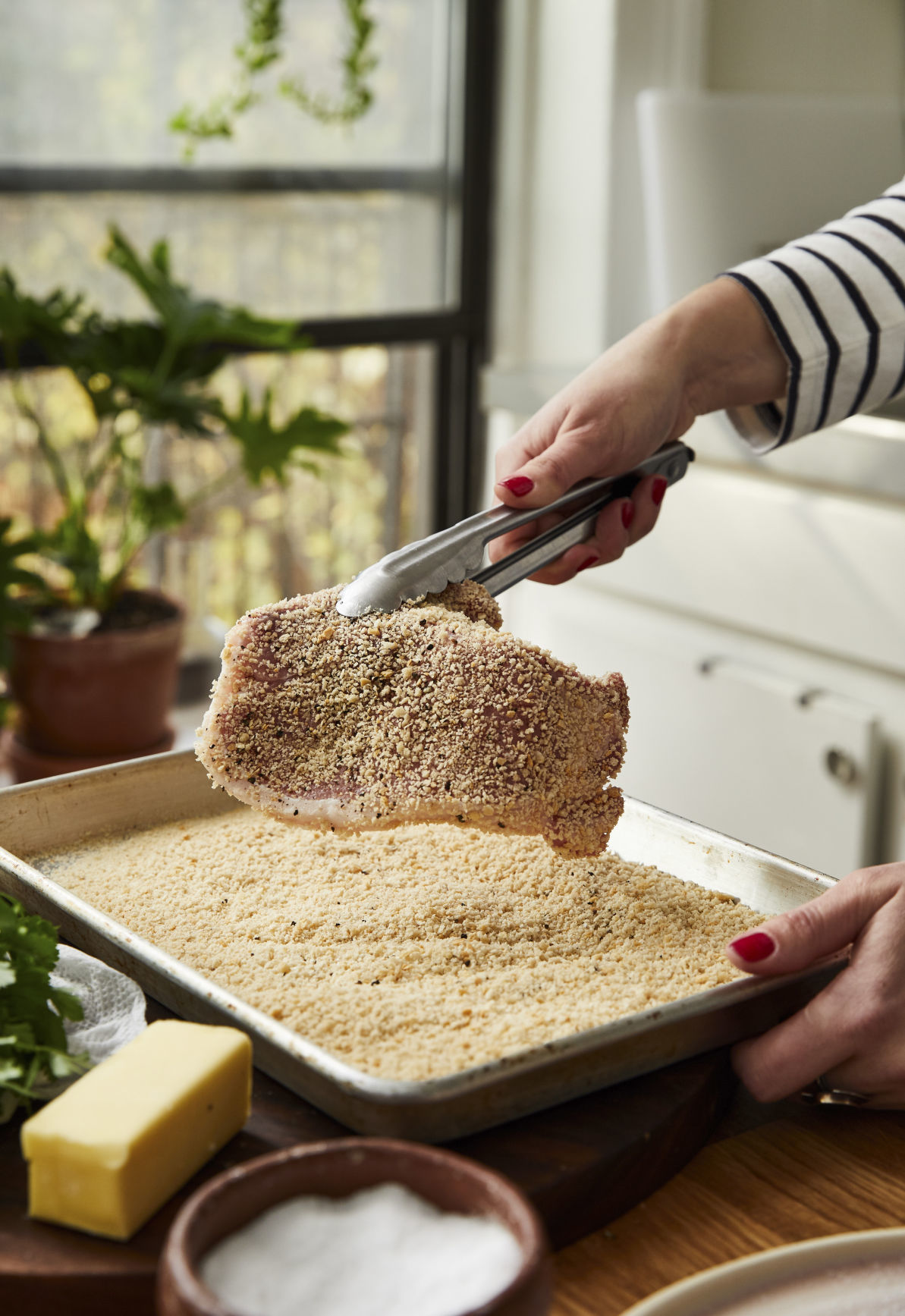 Pork chops are coated in panko bread crumbs during preparation in New York. The recipe involves no pounding, dredging or deep-frying, just crunchy pork chops with an optional squeeze of lemon. 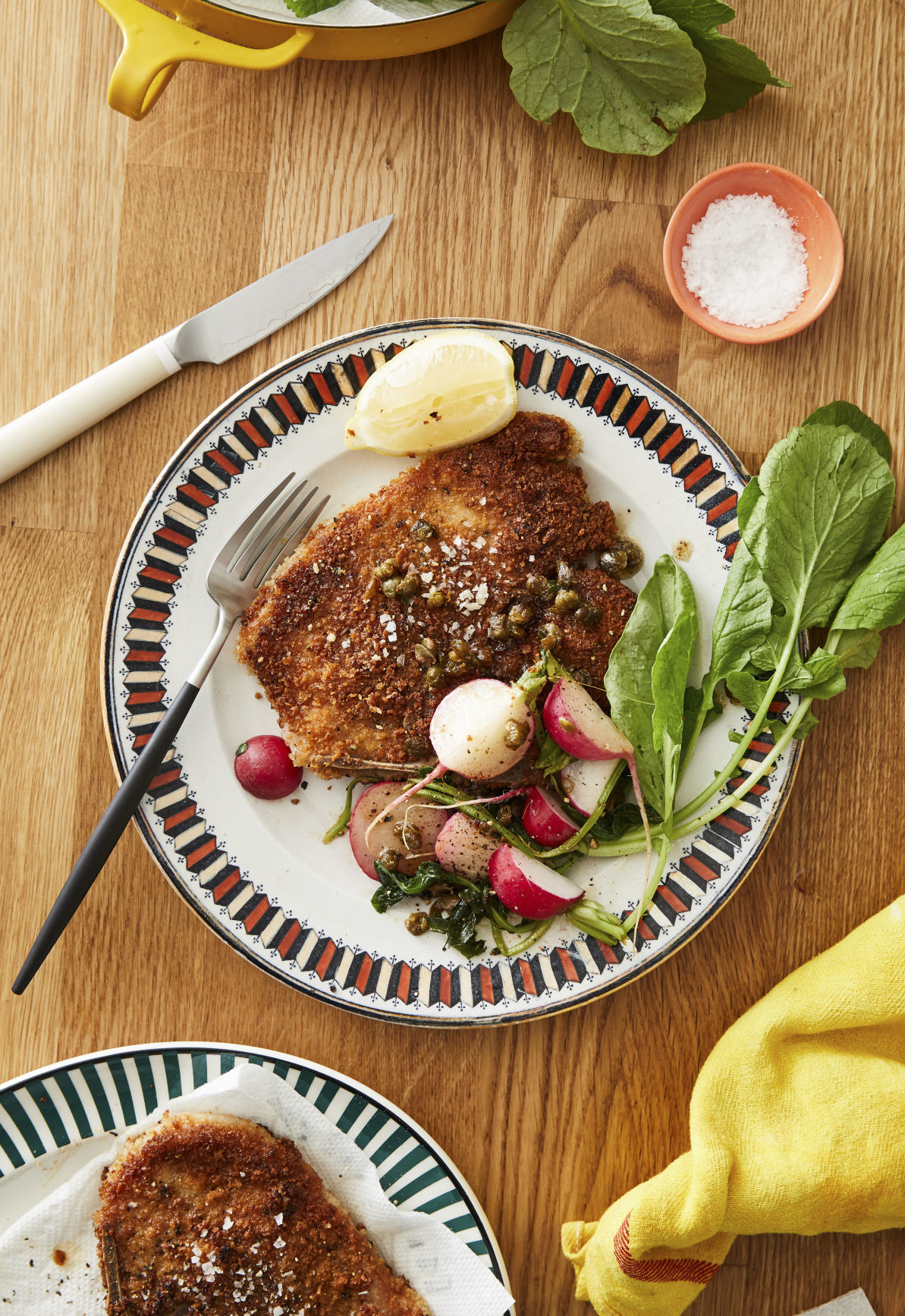 Pork chops are coated in panko bread crumbs during preparation in New York. The recipe involves no pounding, dredging or deep-frying, just crunchy pork chops with an optional squeeze of lemon.

Neighborhood restaurants occupy a very special place in my heart. These spots are not on any “hot” lists, the staff members are pleasant but generally indifferent to your presence, and the menus almost never change.

But none of that matters, because that’s not why you go. You go because you just can’t wash another skillet. You go because they have that one salad you’re always craving and tastes the same every single time. You go because it’s nice to have a place close by where you can sit and have a glass of wine and a crispy pork schnitzel all to yourself.

To be fair, my version is not technically schnitzel, and it’s not quite Milanese, either. I wouldn’t dare call it tonkatsu. The recipe is simply what it says it is, which is a pork chop that is very, very crispy. No pounding, no egg, no dipping, no dredging, no deep-frying. Just a thinly cut chop pressed into some store-bought breadcrumbs and seared in a very hot, generously oiled skillet until it’s as golden brown as a graham cracker.

Most prepackaged pork chops are, in my opinion, cut too thin, which is bad news for anyone looking for a giant, juicy chop, but excellent news for anyone looking to make this recipe. The 1/2-inch pork chop is ideal for this use because it allows you to skip the pounding most pan-fried cutlets call for. The breadcrumb coating also protects the meat from drying out, which it would almost certainly do if you were to try to get any color on a pork chop that thin.

I prefer bone-in pork chops, not just because I find nibbling on the bone to be extremely delightful, but because the bone prevents the meat from contracting in the skillet (which leads to uneven browning). That said, you could do this with boneless cutlets; just be sure to lightly press down on the meat as it cooks to make even contact with the skillet. Another preference of mine is using panko breadcrumbs, since they are the crunchiest right from the get-go and stay the crispiest once cooked.

The greatest disservice you could do to something this crispy is douse it with sauce, but the pork does need a little something-something. I find that most any quick-cooking vegetable (sliced fennel or carrots, spears of asparagus, broccoli raab) tossed in the skillet with browned butter with a few popped capers is perfect nestled alongside the chops (never on top!).

Radishes are my favorite, though, for the way the heat softens them on the outside, giving them a sort of turnip-esque quality and wilting their delicious and often overlooked peppery leaves. Because I can’t help myself, I also like adding raw radishes at the end for extra crunch. (When it comes to radishes, for me more is more.)

While I truly can’t stand being told exactly how to eat (or telling you exactly how to eat), I feel I have to mention a crucial detail for enjoying this very crispy pork: Fresh lemon wedges must always be present, but they should always be served next to and never on the chop. Squeezing the whole thing with lemon juice will immediately soften everything you’ve worked so hard to crisp. Instead, I suggest squeezing each bite right before it goes into your mouth, and not a moment sooner.

It’s how I eat in the restaurant, and at home, it’s no different.

1 bunch radishes, with tops on if you like, cut into quarters

2. Heat oil in a large skillet (10 to 12 inches) over medium-high heat; it should evenly coat the bottom of the skillet. If it doesn’t, add a bit more oil. Place the pork chops in the skillet and cook until deeply golden brown, like the color of a well-baked croissant, 3 to 4 minutes.

3. Using tongs or a spatula, flip pork and continue to cook until well-browned on the other side, too, another 2 to 3 minutes. Transfer pork to a plate, platter or cutting board lined with paper towel and season with salt.

4. Wipe out skillet and return to the stove over medium-high heat. Add butter, letting it sizzle, brown and foam. Add capers and half the radishes, seasoning them with salt and pepper. Toss a few times, just to wilt the radish greens, if they’re still on, and to evenly coat the radishes with the brown butter and capers.

5. Divide pork chops among plates and nestle butter-tossed radishes and capers alongside, plus remaining raw radishes. Sprinkle with a bit of flaky salt and serve with lemon wedges alongside for squeezing over.